It Was Me All Along Is a Must-Read Memoir

“Eating made me forget,” she writes. “Filling my belly stuffed my mind so completely that no space existed for sadness.”

This review was originally published in the January 2015 issue of BookPage.

Andie Mitchell had been overweight for as long as she could remember. But cutely plump as a school-age kid became morbidly obese at age 20, when she weighed nearly 300 pounds. Growing up with a depressed, alcoholic father and a mother who worked round the clock to pay the bills, Mitchell grew to view food—any food—as her friend and companion.

Bowls of sugary cereal kept her company for hours while her mom worked and her dad slept. Drive-thru cheeseburgers rewarded her for staying out of the way while her mother cleaned other people’s homes.

“Eating made me forget,” she writes. “Filling my belly stuffed my mind so completely that no space existed for sadness.”

Despite her weight, Mitchell had plenty of friends and several boyfriends. She resigned herself to a lifetime of obesity. But when size 16 became size 22 during her freshman year of college, and she saw the fear in her mother’s eyes, she knew something had to change. During the following summer and a semester in Rome, she learned to appreciate good food in moderation and discovered that exercise doesn’t have to hurt. Slowly, the numbers began to creep downward as her self-worth creeped up.

It Was Me All Along is the strikingly honest story of one woman’s long journey to self-acceptance. It’s a must-read memoir for anyone who has used food to numb the pain rather than nourish the body.

Start reading It Was Me All Along by Andie Mitchell.

Discover your next great book at bookpage.com. 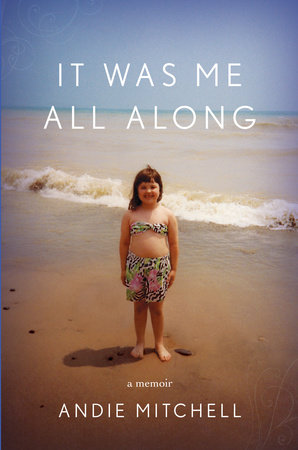 Buy The Book
ANDIE MITCHELL is a writer, recipe developer, and lover of cake. Her popular blog, CanYouStayForDinner.com, shares the inspiring story of her successful weight loss and continued passion for good food. She lives in New York City, where she is the social media director for ShriverReport.org.