Phew. That’s the first feeling that came up when I validated my novel at 7:30 this morning. I got up at 5:45 am so that I could finish my novel and verify it with the NaNoWriMo.org validation engine. It gave me some extra words somehow, too, even though this NaNoWriMo (National Novel Writing Month) I made a pact with myself to write exactly—no more or less than—1667 words a day.

And I did it. So the second feeling I got was that tingly OMG YAY butterfly that’s so good at skipping between my belly and my chest and that is now fluttering down my arms and into my fingers as I write this. 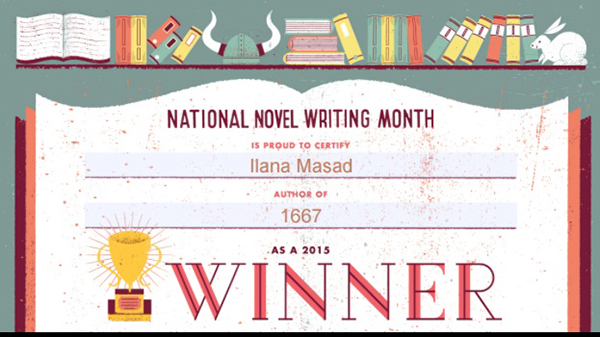 Surviving, getting through, finishing, winning—whatever you want to call it—NaNoWriMo isn’t easy. Writing 50 thousand words in one calendar month (and one that has only has thirty days! Couldn’t we get that extra thirty-first?) is one of the hardest things a writer can do but is also an invigorating, fascinating, and intense experience.

How did I stay alive? How did I make it? Many of you know how, but some of you might not, so here is my secret recipe (that many other authors share, as you’ll see) to surviving NaNoWriMo, and the big 50k:

Or tea, I suppose. I am a coffee fiend, myself, and so coffee was always helpful to me as a survival method. Also, I tried to write in the mornings (which is when most people drink coffee), and, like Jason M. Hough who wrote a draft of The Darwin Elevator during NaNoWriMo, I “let go of the idea of an ideal creative atmosphere” and just wrote, even if I was tired, even if I had other things to do, and even if I’d woken up on the wrong side of the bed.

Because writing was mandatory for me every single day (this was my own rule; NaNoWriMo just tells you the average number of words you have to write a day but lets you write whenever you want) I had to constantly remind myself that this was a draft of my novel, not the final version. Both Marissa Meyer and Erin Morgenstern wrote drafts of their novels during NaNoWriMo, but those versions of their novels are extremely different than those versions that got published—because no matter what you write, there’s always going to be an editing process. Edit, edit, edit, is what comes after it’s a draft, it’s a draft, it’s a draft. Sara Gruen’s Water for Elephants is a particularly successful example of a novel written during NaNo, but her book too was edited, edited, edited after she wrote its first draft.

It’s okay that it’s really hard: “Published NaNoWriMoers stress that people thinking of participating should prepare to sacrifice a significant amount of time and energy to the program.” This is true. Anyone who finished NaNoWriMo with those 50k words or more knows that it isn’t an easy road to walk (or write). I have about twelve jobs (I’m only exaggerating a tiny bit) so when I didn’t get up early enough to write in my morning, I used my commute times to write on my phone or in a notebook. I wrote while waiting at the doctor’s office. I wrote while waiting for the bus. Instead of reading for fun or for my jobs, I wrote and wrote and wrote. And some days I’d get home at night and I still had a thousand or more words to go. It was rough, but I did it. I didn’t let myself do much else until I had finished writing my words. Embrace the difficulty.

It happens. Even though I’ve done NaNoWriMo multiple times, I’ve had at least one where I got close and I lost, or I gave up halfway through because I just couldn’t do anything more. It was difficult, and I felt like a failure, but the truth is, I wasn’t. And you’re not either. Because you wrote something which is better than writing nothing when what you want to do is write. Some writers are slower and more meticulous than others. Some writers simply can’t pack that many words into their days. But it doesn’t matter. NaNoWriMo is a motivator. It’s not the end-all-be-all of being a writer. So cut yourself some slack, and remember that you’ve written however many words that you may not have written if you hadn’t had that motivator. There’s a thrill in creating…