How Cowboy Poetry Pulled Me out of the Abyss

Writer Carson Vaughan's ode to the poetry of Paul Zarzyski.

By Carson Vaughan • 4 years ago 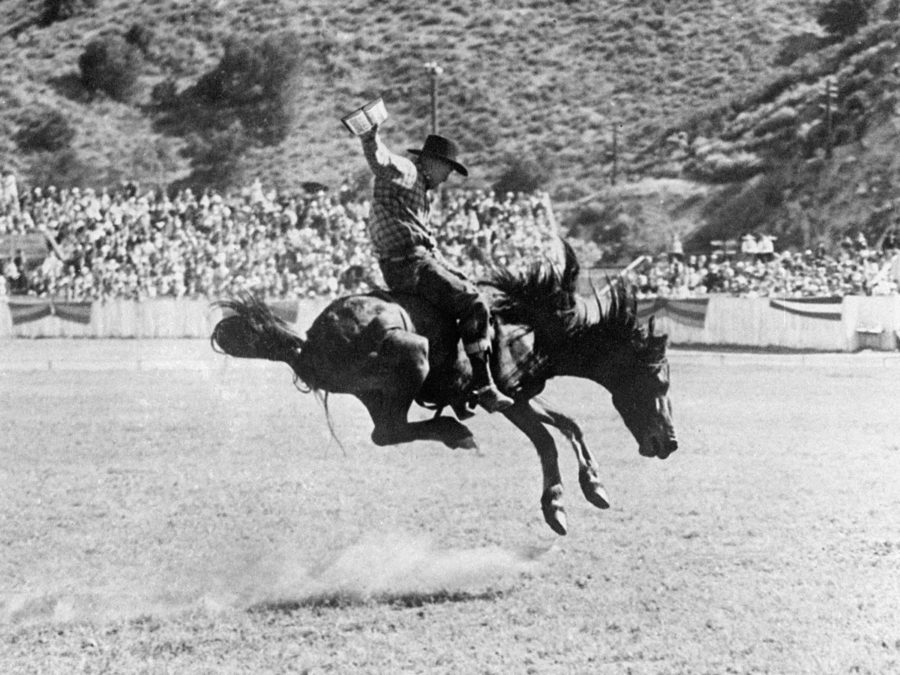 If I’m being honest, I fell for the idea of rodeo poet Paul Zarzyski well before I fell for his verse. Knowing nothing of the genre, I flew to Elko, Nevada, in January 2016 to report on the National Cowboy Poetry Gathering for The New Yorker. Judging by the number of empty seats at his performances—zero, roughly—Zarzyski had achieved celebrity status in this gold-mining casino town. Just watching him attempt to leave the room gave me anxiety. The bags beneath his eyes exposed his weariness after a bare-knuckle performance—spit flying, arms flailing, boots rattling the stage—but he refused to shortchange his admirers, often shaking hands for nearly as long as the show itself. From a distance, I’d catch him finally sneaking away, stealing a quiet moment for himself at the casino diner or outside the convention center, his breath rising in a cold Nevada sky. Even then, I understand now, I was building his narrative. He often talks of living viscerally, but a quick glance in these moments revealed a pensive soul, I thought, a picture more cerebral than he’d painted for himself.

But more than his popularity, I was charmed by his history. Unlike most poets at the gathering, Zarzyski formally studied his craft, completing his Master of Fine Arts degree at the University of Montana under the acclaimed poet Richard Hugo. Though he doesn’t trumpet it—not in Elko, anyway—he’s published poems in Poetry and Prairie Schooner and other esteemed literary journals. Making the rounds that first day in Elko, multiple performers and administrators—intuiting I wanted something “literary” for The New Yorker—ultimately steered me toward Zarzyski, often referring to his free verse poetry, exceptional in a genre still heavily dependent on traditional rhyme and meter. Though I wouldn’t speak to him at all during that first trip to Elko, I left with a portrait of Zarzyski I’d built from scraps: a deep thinker, an iconoclast, a fish who’d grown comfortable out of water, sprouting legs without losing his gills. An amphibian coolly straddling the line between what he calls “the literati and the lariati.”

Nevertheless, it wasn’t until months later that I read his work on the page, and months later still that I picked up his 2003 collection, Wolf Tracks on the Welcome Mat. When Denis Johnson passed, his followers told the same story, that they’d gift his novel Jesus’ Son like candy to anyone who would take it. Wolf Tracks on the Welcome Mat, then, is my Jesus’ Son. It has become a prized possession, a mainstay on my nightstand, the book I send to friends and family when they’re burnt out from work or politics, when they say they “don’t get poetry” or when they’re just feeling blue or when they make the mistake of telling me they’re in search of a new read. Sometimes I send it out for my own sake, so I’ll have someone to share my enthusiasm with. It’s not a book I use to defend cowboy poetry; it’s a book I use to defend poetry in general. From page one, Zarzyski delivers:

…Succumb / to ugly logic, / to mean-spirited / reason, or religion, / and you, believing you shun / merely the unknown, will flee / unwittingly from beauty…

I first read these lines from the collection’s opening poem, “Face to Face,” while flying high above west Texas, returning home from the 17th annual Texas Cowboy Poetry Gathering in Alpine. Zarzyski hadn’t attended, but on my first day in town, I stumbled upon a first edition copy of Wolf Tracks on the Welcome Mat at the local bookstore for just ten bucks. I bought it without hesitation, threw it in my bag and forgot about it until the plane leveled off and I reached for a distraction. This poem has come to embody not just my approach to cowboy poetry, but to art in general, and when I’m at my best, my approach to living. As an outsider to cowboy culture, raised with a healthy appreciation of the arts and a graduate degree in creative writing hanging on my wall, it would have been easy, perhaps even understandable—if not quite excusable—to write off the whole genre as doggerel. But that attitude would have prevented me from experiencing this culture for what it’s worth; indeed, it would have prevented me from picking up Zarzyski’s book in the first place. As I grow older, I’m training myself to dismiss that skepticism, to trust in my emotions instead. My gut. The last few lines of the poem hammer home this idea:

however, waltzing to four-part harmony

within the heart, and you will be moved

to witness, through the chinking’s

of the enchanted. Then, and only then,

thrown open to the glorious

commotion of it all.

So often our response to art is influenced by the moment and the context in which we’re exposed to it. This collection of poems entered my life at the right time, just months after the 2016 presidential election, when—like today—each morning brought new turmoil, a new level of partisanship, a gut feeling that society was not headed in the right direction; that we now disagreed on the most core values and that our country had somehow climbed “to such vast heights of buffoonery that contemplating them strains the midriff almost to breaking,” as critic H.L. Mencken once wrote of America’s “human enterprises.” Except I wasn’t laughing anymore. In fact, the night before I left Alpine, a middle-aged couple filled with conviction lectured me at the bar on the ills of the inner city, all of it a thinly veiled racist screed that left me feeling hopeless.

Over the next week, I spent the first part of each morning slowly absorbing Wolf Tracks on the Welcome Mat. To this day, those moments offered the greatest calm I’ve experienced since Election Day, though I have read other poets—great poets—since then. Zarzyski’s collection oscillates between hope and sorrow, vigor and restraint, but he is always in awe of the life around him, be it human, animal or landscape—always in awe of “the glorious commotion of it all.” But one doesn’t achieve awe in a hurry. This collection forces the reader to slow down, to appreciate the view outside the window; to linger in each word, each “belfry of syllables;” to note the owls gone missing, or the nor’easter pulling in “unannounced with blue smoke / pouring from under the hood / and a trunkful of stolen luggage—unwelcomed as a long-forgotten uncle sporting an orange jump suit…”

Some of my favorite poems in the collection lean meta and self-referential, calling attention to the process itself. In “This Poem, This Predator,” for example, Zarzyski laments the act of shooting a skunk that later inspired the poem.

in the flat pasture. I watch its white

in the breeze, my own breath

stiff and reeking off this page of black

beating, to give you back this stinking

Or “Montana’s Mistral,” a poem darkly contemplative, a humble existential moment set against the backdrop of a howling Montana wind.

back into my life. But they have been

kidnapped by this insidious wind

snipping the phone lines. It knows

I have no one to call on

but myself. Lurking in the same blackness

as unanswered prayers, it knows

my poems are not enough

to pay its large ransom

But perhaps more than anything, it is the palpable sense of gratitude—even in the wake of loss, or the “blackness of unanswered prayers”—emanating from this collection as a whole that has me returning to it again and again in these troubled times. We live in an invective era, stoked by cable news and social media; an era in which making your voice heard is paramount, no matter what it takes and no matter who stands in the way. In ways both subtle and not, I feel weighed down by this vogue of shouting and cynicism.

To read these poems is to open the relief valve, to exit the interstate chaos and meander the backcountry blacktop. Without leaning on religion or sentimentality, Zarzyski shows how to give thanks, how to stand humble before the universe, how to live sincerely.

I pray it catches on. 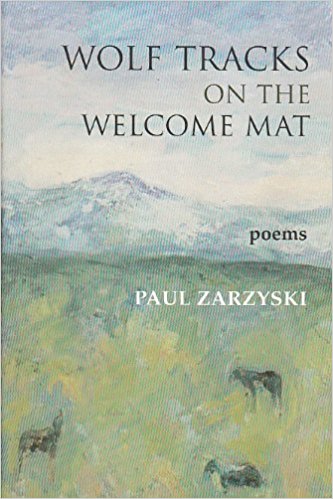 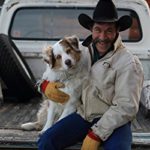 PAUL ZARZYSKI migrated west in 1973 from his homeground in Hurley, Wisconsin to study with poets Richard Hugo and Madeline DeFrees as the University of Montana, where he received a Master of Fine Arts degree and, later, taught creative writing. He has toured Australia and England, recited at both the National Storytelling Festival and the National Book Festival, the Library of Congress and on Garrison Keillor's "A Prairie Home Companion." He considers the National Cowboy Poetry Gathering his second home, and has been a featured performer there since 1987.

CARSON VAUGHAN is a freelance writer based in Omaha, Nebraska. His work has appeared in The New Yorker, Vice, The Atlantic, The Paris Review and many others.