"When the day is winding down and you’re ready to relax with something to drink, and perhaps a few nibbles, before sitting down to dinner...."

By DAVID LEBOVITZ • 5 years ago

My very favorite time of the day is when l’heure de l’apéro begins. This is no fixed heure (hour), but signifies when the day is winding down and you’re ready to relax with something to drink, and perhaps a few nibbles, before sitting down to dinner.

The host of the first dinner party I was invited to in Paris told me the party would start at 8:00 p.m. However, he followed with, “You know, in Paris you’re never supposed to arrive on time. That’s très impolite. You should always be twenty minutes late.” For someone who’d spent his life baking professionally, fixating over a timer, it was hard to adjust to not arriving exactly on the dot. And to this day, I can’t tell you how many times I’ve paced around the block in Paris, waiting for the twenty‐minute minimum to pass so I could finally ring the doorbell.

Having lived in Paris for a decade, I’ve collected many Parisian friends and entertained often. And in terms of lateness, I’ve learned that twenty minutes is actually considered the absolute minimum.  I have several friends who are so habitually tardy to the extreme that I now say, “We’re sitting down to eat at 9:00 p.m.,” because I get so unraveled watching food sit in the oven, waiting for my late arrivals. In some instances, l’heure has turned into les heures, during which a few too many glasses of les apéritifs are consumed. And  by the time everyone finally arrives, I am no longer fit to serve anyone anything.

The selection of drinks served during l’heure de l’apéro may be wine, beer, or an apéritif. Parisians sometimes drink white port as a before‐dinner drink, and le whisky has become quite popular, in addition to Cinzano and Martini & Rossi, just called “Martini,” which surprises visitors who get served a squat glass of red vermouth rather than a chilled, neat cocktail. Beer has made considerable inroads into café culture, and it’s far more common to see foam‐topped glasses on café tables in the early evening hours than wine, especially with the younger set. My choice remains wine, often chilled glasses of rosé in the summer, and a white wine from the Loire or a not‐too‐challenging red wine the rest of the year. Champagne, of course, is appropriate any time of the year, as is Crémant d’Alsace, a French sparkling wine that is affordable enough to turn even the most casual get‐together into a festive event.

“You know, in Paris you’re never supposed to arrive on time. That’s très impolite. You should always be twenty minutes late.”

As a café barman once told me, pushing a bowl of half‐eaten pretzels down the bar my way, “Violà . . . it’s nice to have something to snack on with your drink.” I appreciated the gesture, but prefer to serve my guests something a little spiffier. True, if I’m busy, it might be a bowl of pretzels (from a freshly opened bag) or some salted nuts. Other times I will serve sliced dried sausage with some Lucques olives. Or I’ll put out a plate of radishes, fleur de sel, and thin‐sliced country ham. Because France isn’t necessarily a “snacking” culture (I remember a French friend’s father being shocked when he caught me eating between meals!), many of the dips and spreads are adapted from the other cultures that have settled in France and that tend to like to nibble as much as I do.

When I’m feeling a little exotic, I’ll mix some of the dukkah I keep on hand with olive oil to make an instant dip to serve with slices of baguette or carrot sticks and cucumber spears. If I’ve planned ahead (or kept some in the freezer), there might be little rounds of buttery Comté and ham wafers or Salted olive crisps.

When friends are gathered at my kitchen counter, I’ll roll out Indian cheese bread, cheese‐filled breads that are best served hot off the griddle; or pissaladière, an onion, olive, and anchovy pizza that can be served warm or at room temperature (see recipe below). The little bit of salt from the anchovies—and the wine required to quench the thirst that it encourages—helps facilitate conversation and may encourage latecomers to arrive on time in the future to see what they missed. 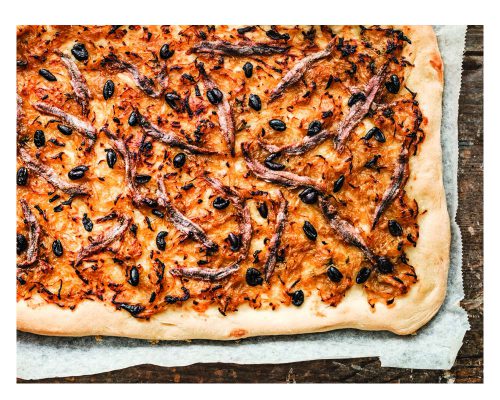 4 tablespoons (60ml) olive oil, plus more for brushing over the crust

Pissaladière should be crisp and very thin, not thick and bready.  Full‐flavored onions are strewn over the top along with strips of  anchovies and Niçoise olives, which are worth tracking down. If  you can’t find them, another oily French olive will do, or even  chopped kalamatas—although don’t tell the people in Provence 69 that you are using Greek olives on their beloved onion tart. They probably also don’t want to know that most of the Niçoise olives are now cultivated in Spain, either. The French don’t normally  pit olives, and indeed, pitting tiny Niçoise olives can make them dry out during baking. So feel free to leave them whole—and alert unsuspecting guests to watch out for pits (and ice, if you serve this with iced rosé, as you should). 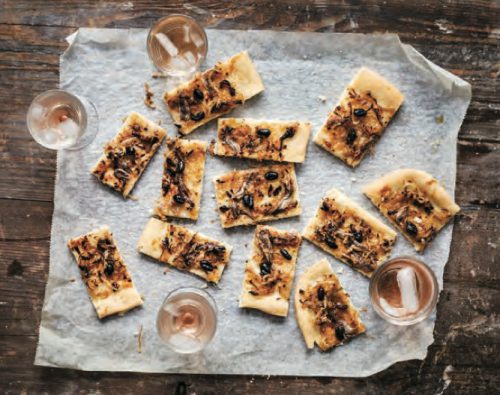 For those who complain about pitting olives, easier to make is an  artichoke tapenade, another spread that Jacques sold from bins. It  can be made quickly with canned artichokes and capers, everything  easily whirled up in a food processor with no pitting required. Who can râle about that?

“Reprinted with permission from My Paris Kitchen by David Lebovitz, copyright © 2014. Published by Ten Speed Press, an imprint of Random House LLC.” 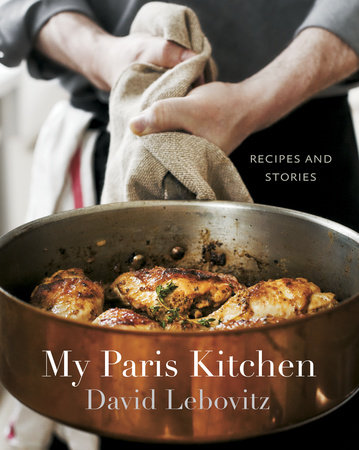 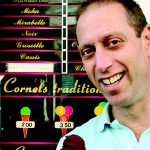 DAVID LEBOVITZ is a sought-after cooking instructor with an award-winning food blog (davidlebovitz.com). Trained as a pastry chef in France and Belgium, David worked at Chez Panisse in Berkeley, California for twelve years. He now lives in Paris, France, where he leads culinary tours of the city.

DAVID LEBOVITZ is a sought-after cooking instructor with an award-winning food blog (davidlebovitz.com). Trained as a pastry chef in France and Belgium, David worked at Chez Panisse in Berkeley, California for twelve years. He now lives in Paris, France, where he leads culinary tours of the city.