Read These Books Before the Fall Movies Come Out 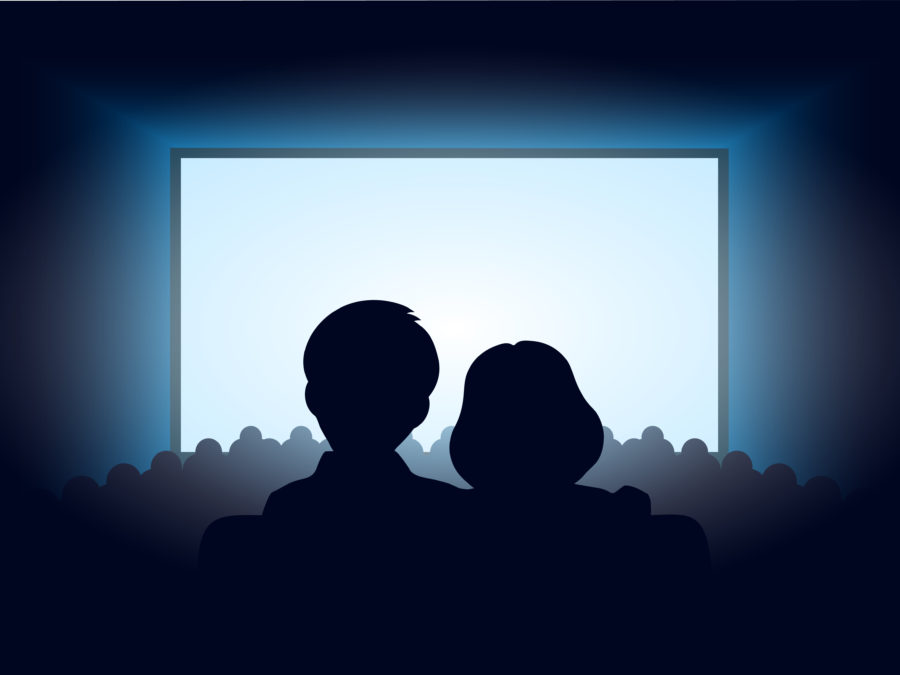 Earlier this year, we brought you a bookshelf of the summer blockbusters based on, yeah, what else, books. It seems like there are more and more of these movies each year, doesn’t it? Then again, we’re not ones to shy away from the films based on books we love. Sure, some people prefer to avoid the films and read the books, and some, like me, prefer to at least read the books before going to see the movie, but whatever your preference is, it’s nice to know which movies out there aren’t 100% original. I’ve definitely been guilty of walking into a theater, watching the opening credits, and then finding my mouth drop open when I see those words, “based on a novel by…” It happens to all of us. Some of the books here you may recognize, some you may not even know were being made into movies. Which is exactly why we’re here to share our obsessive knowledge with you. Read, watch, enjoy! 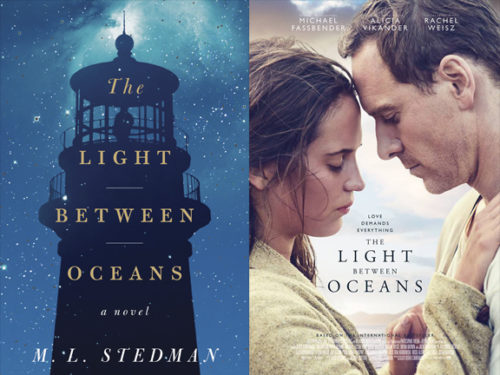 The Light Between Oceans by M.L. Stedman

The book’s title refers to the lighthouse where Tom and Lisa Sherbourne live for some years as Tom works as a lighthouse operator on Janus Rock, Australia. The couple stays on the small island through years of harrowing conception, stillbirths, and miscarriages, until one day a boat washes ashore. A boat with two souls one it: a man, dead, and a baby, very much alive. Lisa insists on keeping the child and raising her as their own, but when the couple returns to the mainland when their adopted daughter is a toddler, they slowly realize the consequences of their actions. Curl up with this book before going to see the light and ocean play out on the big screen. (In theaters September 2, 2016) 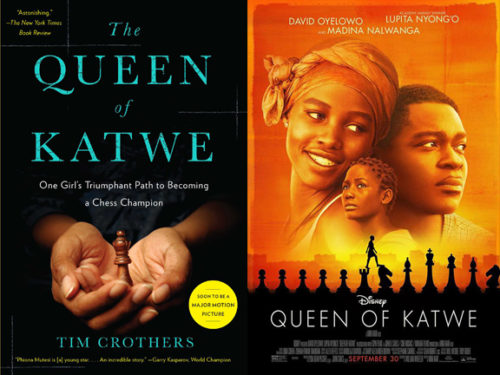 The Queen of Katwe by Tim Crothers

From the slums of Uganda to the hallowed halls of competitive chess, Phiona Mutesi is the real life heroine of this story. Mutesi lived in Katwe where a missionary, Robert Katende, began teaching children chess—a game that has no name in Mutesi’s language. Mutesi excelled at the game and only two years after stumbling into Katende’s makeshift chess school, she becomes her country’s junior champion. Four years later, at 15, Mutesi is named the national champion. Read up on her journey in Cruthers’ astonishing book before heading to theaters to see Disney’s rendition of Mutesi’s incredible journey towards competing for the Grandmaster title. We cannot wait for this film, starring David Oyelowo, Lupita Nyong’o to be released! (In theaters September 30, 2016) 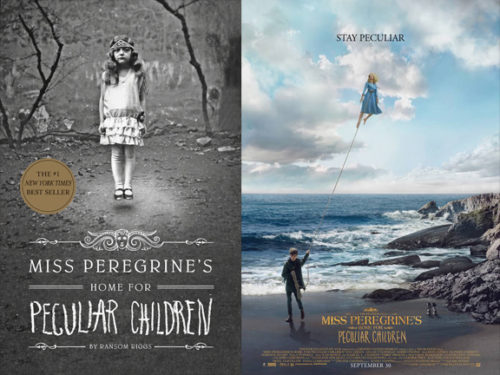 At 16, Jacob suffers a terrible tragedy that leaves him alone and setting off to a remote island in Wales. There he discovers the ruins of what used to be Miss Peregrine’s Home for Peculiar Children. The home, which Jacob begins to explore, gives up its secrets slowly, as Jacob begins to uncover the fact that maybe the children who once lived there weren’t just strange. And maybe they weren’t put in the home for their own good. Maybe it was for the good of others. And now that the home is no more… well, where these peculiar children go? Are they still around? Still alive? The film adaptation of this weirdly hypnotic book is sure to be as immersive as the novel, especially with director Tim Burton at the helm. (In theaters September 30, 2016) 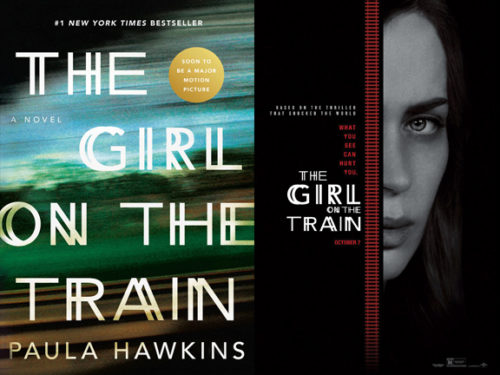 The Girl on the Train by Paula Hawkins

If you haven’t already read The Girl on the Train, you have a perfect excuse to do so immediately. The New York Times bestseller tells the story of Rachel, a woman whose commute to and from London is uneventful. She takes the same train to and from work every day, and while trying not to think about her divorce, she watches another couple instead and narrates their happy life to herself. Until, one day, she sees something different. Something that makes the rest of her day a blur. She wakes up the next day bruised and confused, not knowing what happened the night before. Worst of all: the happy couple she’s been watching? One of them is missing, and Rachel is involved. Somehow. Read this gripping novel (or listen to the audiobook) on your own commute this month and catch up on the hype before seeing Emily Blunt as Rachel on the silver screen later this fall. (In theaters October 7, 2016) 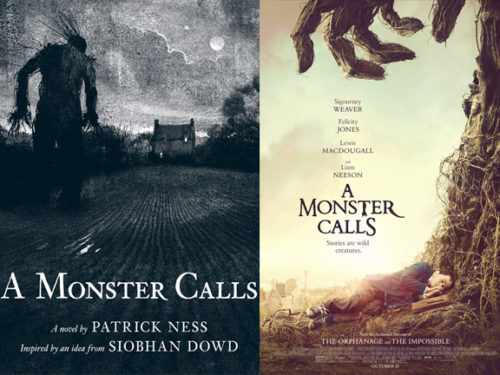 A Monster Calls by Patrick Ness

A story with a terribly sad origin, A Monster Calls was written by Patrick Ness because author Siobhan Dowd passed away from cancer before she had a chance to write it. In the book, just-turned-teenager Conor has been having the same nightmare populated with the same monster every night since his mother—also extremely ill—began her treatment. But one night, when a real monster shows up, it’s not the one Conor was expecting, not the one from his dreams, but a different one: old, powerful, terrifying, demanding. With Liam Neeson cast as the monster, this is a Halloween-tinged movie you won’t want to miss. (In theaters October 21, 2016) 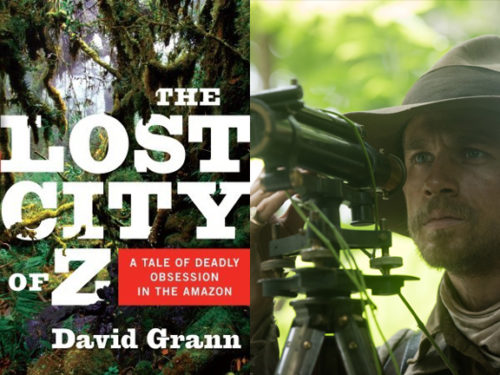 The Lost City of Z by David Grann

Sometimes truth is stranger than fiction, and this is definitely the case with author David Grann, who discovered a bunch of hidden diaries that led him on the quest to the Amazon to try to find what happened to Colonel Percy Fawcett, a famous British explorer who disappeared in 1925, while searching for what he called the Lost City of Z. Grann wasn’t the first to go on such a mission—far from it. After all, the city was rumored to be El Dorado, the legendary city of gold. Read Grann’s own narrative of unraveling the secret of what happened to Fawcett’s expedition and the truth about the Lost City of Z in his riveting non-fiction book before heading into theaters to watch the Amazon’s forests (and Charlie Hunnam as Colonel Percy) on the big screen. (In theaters October 27, 2016) 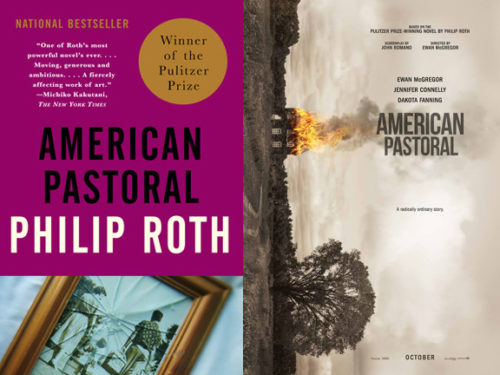 Considered by many to be Philip Roth’s greatest novel, American Pastoral is, essentially, about a former suburban high school baseball star, Swede Levov and what happens when his American dream life gets turned upside down. Taking place in 1968, at the height of Vietnam War protests, Swede’s daughter commits an act of domestic terrorism that tears away the rosy goggles through which Swede has been watching his surroundings. Told through a frame narrative in the book, we’re all waiting to see how Ewan McGregor, directing and starring in the film adaptation, will make the novel work cinematically. (In theaters October 28, 2016) 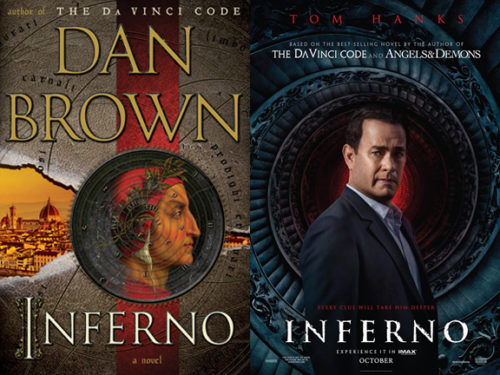 If you’re not all caught up on Robert Langdon’s journeys, now’s the perfect time to check out another of his fast-paced, incredible, page-turning yarns. In this novel, Robert Langdon wakes up in a hospital, only to find out that he’s lost the last 36 hours, that he’s carrying a precious and mysterious object, and that there is an assassin combing Europe for him. As the pace quickens, he discovers that he is running against the clock towards disaster, an end-of-the-world scenario set to rival everything Dante Alighieri’s The Inferno put forth. Tom Hanks is in plenty of movies this fall, but we can always count on his Professor Langdon performance. (In theaters October 28, 2016) 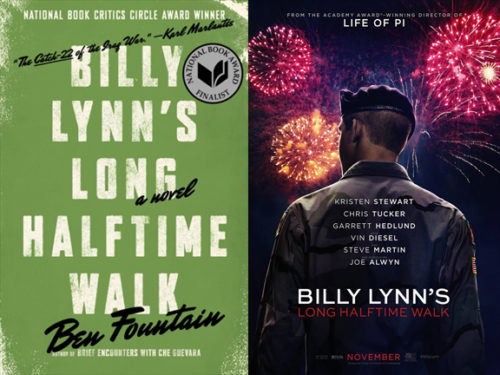 Billy Lynn is just a kid. A kid who’s been through a terrible ordeal and a disturbing battle on his tour of duty in Iraq—a battle that was caught on tape, and made his squad famous. On a brief visit home to honor them, the surviving members of Bravo Squad, Billy among them, are feted in front of cameras, from the time they land to their appearance in a Thanksgiving Day football game halftime show. The disconnect between life as a civilian and life as a soldier is deeply felt in this debut novel, and even more so, the discomfort with being celebrated for something terrible, confusing, and traumatic. This short novel is definitely, definitely, worth reading before checking out the film version this Thanksgiving season. (In theaters November 11, 2016) 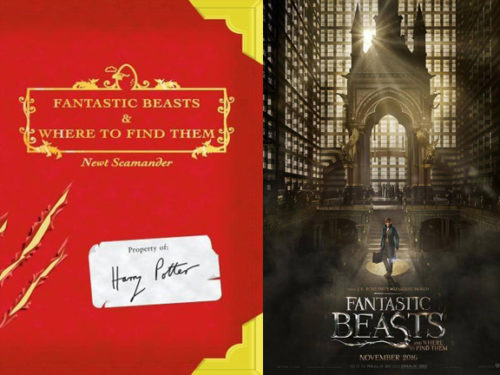 Fantastic Beasts and Where to Find Them by J.K. Rowling

One of the two (so far?) Hogwarts school texts that J.K. Rowling released years ago—with all proceeds of this book and Quidditch Through the Ages going to charity—Fantastic Beasts and Where to Find Them is full of scribbles by our favorite Harry Potter characters. A fun and illuminating look into creatures of all kinds (some of which Rowling cheekily revealed in the later volumes of the Harry Potter hepatology). This is not to be confused, by the by, with the screenplay of the movie version of Fantastic Beast and Where to Find Them which will be going on sale the same day the film premieres. And the film title is a little deceiving, as it’s not so much a movie adaptation of a textbook (which, to be fair, would be impressive if someone ever managed to to it), but rather a narrative about Newt Scamander, the author of the textbook. (In theaters November 18, 2016) 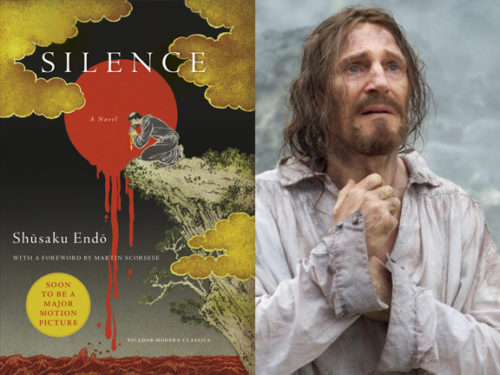 Considered one of the masters of Japanese literature, Shûsaku Endô’s novel about religious persecution is a classic. The historical masterpiece revolves around two Portuguese Jesuits, who travel to feudal Japan in the 17th century. Trying to find their mentor as well as convert locals, the two (played in the movie version by Andrew Garfield and Adam Driver) find themselves embroiled in terrible violence, watching Japanese Christians being slaughtered for their beliefs. The Jesuits’ own faith is also tested throughout their difficult journey. After reading the book (it’s pretty short at less than 250 pages), head over to the cinema to watch the great Martin Scorsese’s take on it. (TBA, 2016) 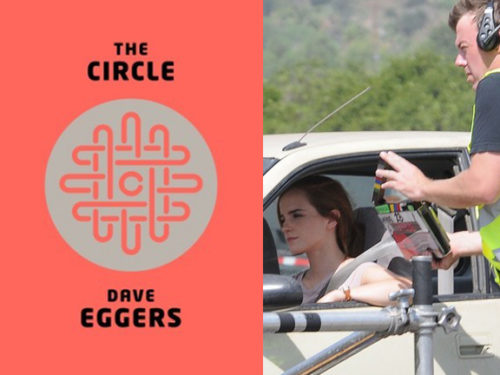 The Circle by Dave Eggers

It’s a new electronic age in Dave Eggers’ The Circle, albeit one not that far from the future. The Circle is a leading internet company that centralizes users’ identities across their various social media platforms, and it’s there that Mae Holland gets a job. But soon the all-encompassing campus of the Circle begins to swallow Mae and her outside connections become distant. As strange occurrences begin haunting her and she becomes more and more of a public figure, Mae finds herself confused, scared, and suspicious. Emma Watson and Tom Hanks are set to star in the film adaptation, which is sure to be a fascinating look at technology, transparency, and privacy. (TBA, 2016)