For this New York City-based book lover, the bookstore is a place of worship. 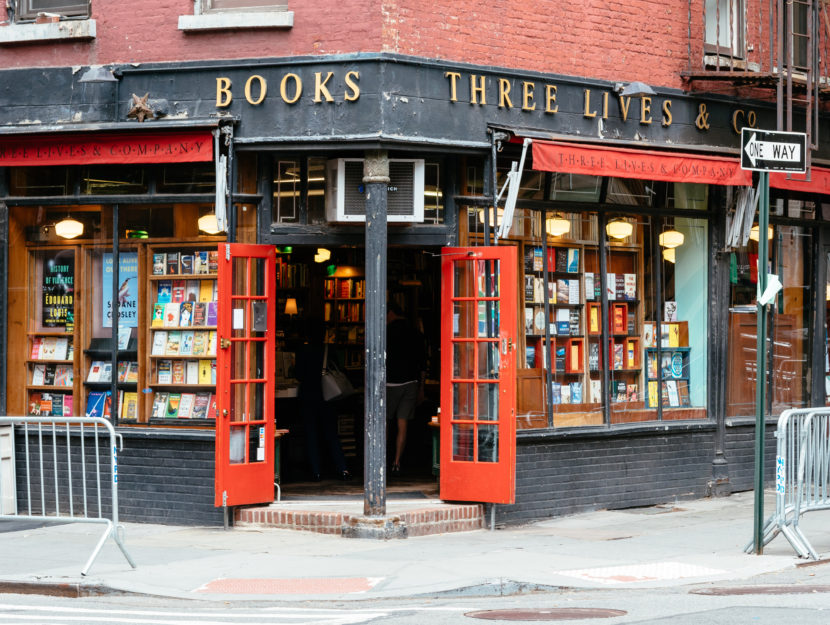 On a Tuesday around 12:30 PM, you might find me in what I call the “secret” Strand, a little bookstore nested like a Russian doll behind the Putnam & Putnam flower shop behind the Toby’s Estate Coffee inside the Club Monaco flagship store on Fifth Avenue in Manhattan. If the main Strand (12th and Broadway) boasts “18 miles of books,” this speakeasy of a branch offers about a hundred meters worth, a mere dash. I often retreat there on my lunch break for a midday hideaway and a reprieve from the screens and stress of the office.

A chameleon, a bookstore can be a theater, a gallery, a workspace, a gift shop, a landmark, a safe haven, an oasis. A bookstore is always, I think, a place of worship. Devotees show respect and reverence: for each other, for the texts, for the space, for the fact that reading is sacred in its silence. Believers—in the awesome, transformative power of words—gather to study and introspect and discover. Squint and you could imagine customers as congregants, eyes on the page, minds in the sky, praying separately, together. The experience is collective and also deeply personal, almost spiritual.

Sometimes I’ll visit Spoonbill & Sugartown in Williamsburg or the new Rizzoli in Flatiron (dubbed “the most beautiful bookstore in New York”), browsing from cover to cover, each one an entranceway, a portal to an undiscovered elsewhere. I’ll meander through, touching everything, like a six-year-old in a toy store, hoping to absorb knowledge or inspiration through some miracle of osmosis.

I’ve beheld a certain kind of magic, no doubt. One time I was transfixed by a butterfly that had mysteriously found its way into the basement of McNally Jackson Books in SoHo. The pitiful thing was struggling; unable to elevate, it could only leap about a foot above the floor before finding itself grounded. I watched as it hopped desperately around the stacks, then towards me, and then directly onto my left shoe where it sat, exhausted. After a few submitted moments, the butterfly, in a miraculous display of spirit and strength, fluttered upwards—six, seven feet into the air—flapped its wings triumphantly, circumnavigated the entire sports section, and landed again, this time on my right shoe. After a full minute of stillness, the butterfly hopped onto to the floor, and we went our separate ways.

Another time, I’d been on a long and fruitless search for Mark Leidner’s poetry collection, Beauty Was the Case That They Gave Me. I’d visited all the big bookstores, including The Strand and even the mothership, Union Square’s Barnes & Noble. No dice there, or at any of the half-dozen other stores I’d called. Discouraged and nearly resigned, I stopped by Housing Works Bookstore Café, a volunteer-run used bookseller whose mission is to fight homelessness and AIDS; I wasn’t optimistic. When I inquired, the clerk told me the title wasn’t on the floor but figured he might as well check the basement. A few minutes later, to my surprise and delight, he emerged with Leidner’s book in hand. I flipped it open, and there was the author’s signature. The price for the signed copy of my rare and elusive favorite book? Five dollars.

(Totally unrelated, but I’d be remiss not to mention that Housing Works serves the best oatmeal raisin cookie I’ve ever had.)

As an avid urban explorer and closet loner, I use bookstores as landmarks on my self-guided weekend walking tours. For a taste of downtown, I’ve hopped from The Strand to Mast Books to St. Mark’s Bookshop (RIP). From east to west, Community Bookstore (Park Slope), Unnamable Books (Prospect Heights), and Hullabaloo (Crown Heights) introduced me to three of Brooklyn’s most vibrant neighborhoods.

I moved to the borough four months ago, but my first home there was powerHouse Arena, with its starkly un-Manhattan-like openness, its soaring ceilings, its glass frontage ushering in the benevolent light from high in the Dumbo sky. Many afternoons when I needed an escape from the city, I’d settle on the Arena’s amphitheater-style stone steps, which were big and smooth and surprisingly un-cold and reliably unoccupied. Those steps served as a scenic vista where I’d gaze outward and survey the landscape, or gaze inward and percolate with ideas, or read Between the World and Me until I got kicked out at closing time.

The Arena recently closed and reopened around the corner, still offering glass windows, but much smaller and, nestled in the shadow of the Brooklyn Bridge, decidedly shadier. The new powerHouse might not be quite the “glorious whirlwind of captivating spectacle” as its website described the original, but it’s still glorious, still spectacular. The first time I visited the new space, the sky opened up, thunder crashed, and rain bombarded the windows and streets. We were trapped inside, and that was totally fine by me.