Her role as a writer made her famous, but she's beloved in our hearts for being a nonstop reader. 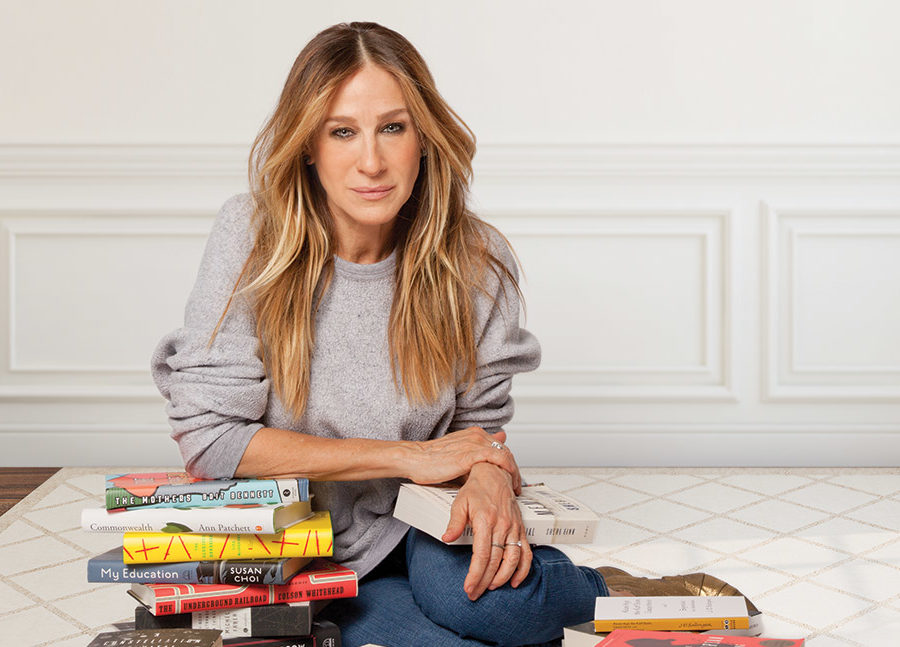 Sarah Jessica Parker (also known as SJP) played a writer on the longstanding hit series Sex and the City, but in real life, she’s a voracious reader. Her love for books led her to become both an editorial director for her own imprint, SJP for Hogarth, and an honorary chair of Book Club Central for the American Library Association. Books are clearly an important part of her life, and—luckily for us—she regularly shares her favorite picks on Instagram.

Now I know it’s the weekend. Edward St. Aubyn, I have been waiting. @hogarthbooks thank you for the divine Hogarth Shakespeare series. X, SJ

Relaxing on the beach with a glass of wine is always good fun, but it’s not complete without a good book. SJP pairs her tranquil surroundings with Dunbar by Edward St. Aubyn, part of the Hogarth Shakespeare series.

Rainy day, kids home, been holding this one in reserve. 1000 pieces. Don’t wait up. We are just starting edges. X, SJ

Rainy days can be a downer, but SJP manages to make the best of them. While drawing and putting together puzzles with her kids, she also takes time to read Night Thoughts by Wallace Shawn and The Prisoner of Second Avenue by Neil Simon.

It’s official. “No One is Coming to Save Us” by Stephanie Powell Watts is our inaugural title for ALA #bookclubcentral. Start reading. Join the conversation. Details and dates to follow. Go to your local library, support your local book seller, visit bookclubcentral.org and enjoy this great summer read. X, Sj

Excited for the launch of her first title for the ALA Book Club Central, SJP poses with her pick: No One is Coming to Save Us by Stephanie Powell Watts.

“Hourglass”, a gift from the author. “Exit West” and “Sergio Y.”, a gift to myself after a visit to Three Lives bookstore. I feel armed and ready for any sneaky or openly revealed pleasure reading. X, SJ

With so many great books out there, it can be tough to choose just one to read next. SJP set aside Hourglass by Dani Shapiro, Sergio Y. by Alexander Vidal Porto, and Exit West by Moshin Hamid for some upcoming pleasure reading.

In between takes on @divorceonhbo subway rides, van drive home from work and any chance I get. X, SJ

For SJP, finding the downtime to sink into books she loves—like Ariel Levy’s The Rules Do Not Apply—means squeezing page-time between takes on set and her commute to work. (The latter, we get. The former, not so much.)

Maybe holding this new biography in my hands will make me miss him less? Doubt it. X, SJ

David Letterman leaving Late Night was a huge blow to many of his fans. To make up for missing him on her television, SJP read his biography by Jason Zinoman, Letterman: The Last Giant of Late Night.

On set @divorceonhbo day 2 Me chair. Me resting place. Me repository for all things with letters, liquids or warmth. X, sj

SJP’s work for the American Library Association isn’t an empty title—she actually loves spending time at her local library. While her first-choice book, Little Women, was checked out, she was still happy to bring home The Phantom Tollbooth by Norton Juster.

For all you meatloaf fans, and meatless loaf fans Drumroll The holy grail of loafs! Everytime I think I have settled on a favorite… X, sj

While she usually sticks to novels, SJP also loves a good cookbook. Here, she shares one for fellow meatloaf fans: A Meatloaf in Every Oven by journalists Frank Bruni and Jennifer Steinhauer.

How to describe the specific joy of a book unexpectedly arriving? And that delight in all the promise between the covers? X, sj PS thank you @scribnerbooks !

Nothing thrills us more than unexpected book mail, and it seems like SJP would agree. Look how excited she is to show off a copy of The Antiques by Kris D’Agostino.

Sometimes the hardest part of reading a great book is realizing it’s almost over—as SJP realized when she neared the final pages of The Nix by Nathan Hill.

I know Im late to the party but @amysedaris is correct again (and many others who have shared similar and enthusiastic regard) Ann Patchett is a sublime writer and this book a wonderful read. X, sj

The best kind of friends are the ones who recommend books. SJP might have been behind the curve in reading Ann Patchett’s Commonwealth—recommended by Amy Sedaris—but she certainly didn’t let that stem her praise for the book.

Breakfast, lunch and dinner. I will devour. And savor the marrow. X, sj #sjpbookclub

While some of us might plan what food we’re eating for each meal, SJP picks what books she’ll devour for each meal. Today’s menu? The Mothers by Brit Bennett, Secondhand Time by Svetlana Alexievich, and The Gilded Rage by Alexander Zaitchik.

Available August 9th. Tim Duggan Books. A book and tale to be reckoned with. Ms. McInerney should pull up a seat next to McPherson, McCann, McCourt and all the Irish greats. I gobbled this up and mourned the last page. Completely fulfilling, devastating and perfectly captures life in the city of Cork. “Fecking” Brilliant. X, SJ #sjpbookclub

SJP is a big fan of The Glorious Heresies by Lisa McInerney. She even considers the author one of the great Irish authors—high praise, indeed.

I can’t stop. No one talk to me. X, sj #sjpbookclub

Ever have that moment when you’re so invested in a book, you can’t do anything until you’re finished? SJP was so invested in Sweetbitter by Stephanie Danler, she sent out a public call for silence. We got you, girl.

My book club books don’t usually coordinate so perfectly. It’s as if the authors had planned it. But all that matters is what’s happening between the covers, as they say. 2 magnificent and wonderfully different adventures in reading. Both Mr. Colson’s “The Underground Railroad” from Doubleday and Mr. Towles “A Gentleman In Moscow” from Viking available in September 2016. Reserve from your library now or check in with your local bookseller. On to the next. X, sj #sjpbookclub

For her book club, SJP selected two critically acclaimed books—The Underground Railroad by Colson Whitehead and A Gentleman in Moscow by Amor Towles—that also happen to look great together.

The ultimate downer of being a book-lover? Running out of shelf space. Luckily for SJP, she had room to add more to house her ever-growing book collection. Among the titles, we spy Evicted by Matthew Desmond, A Little Life by Hanya Yanagihara, All the Light We Cannot See by Anthony Doerr, I Almost Forgot About You by Terri McMillan, and Lab Girl by Hope Jahren.

What Loretta casually did while I read the first 2 chapters of “Tales of a Fourth Grade Nothing” X, sj

Reading is a pastime SJP likes to spend with her family. While she was reading from Judy Blume’s Tales of a Fourth Grade Nothing, her daughter drew the cover of The Secret Garden.

Things to do to pass the time before Friday night’s PA at @ultabeauty in Edgewater, NJ. Re-read Catcher in the Rye. Finalize holiday gift list. Get Tabitha needle threader. Encourage JW to finish his “letter to Santa” asap! Find out from Mommy if she still soaks her whites in hot soapy water. Get baker’s string for Loretta for shell necklaces. Fill the tank on the minivan. It’s got to get me across the river. Head to @sjpbeauty for the details. X, Sj

You would think the person behind ultimate glamor-girl Carrie Bradshaw would be picky about where she reads, but SJP is perfectly happy sitting on the floor while reading Salinger’s classic The Catcher in the Rye.

Just as beautiful as the towers that create the skyline of NYC… Books are our companions in adventure and help create a connection to others, near by and far away. And I’ve never left home without one. It’s now my great privilege to share and expand my love of literature with all of you, no matter where you call home. To learn more about my new imprint with Hogarth and to follow along with what I’m reading, visit sjpforhogarth.com and use #SJPBookClub. Happy reading. X, Sj​

To share the exciting news of her new imprint, SJP made a beautiful tower of books to photograph before the NYC skyline.

So worth the wait. X, sj

It was a worthwhile wait for Robert Gottlieb’s Avid Reader. Perhaps the memoir’s title reminded SJP of herself?

The essentials (according to me) for a comfortable trip to London. For purpose of trip go to @sjpbeauty and maybe I will have the pleasure of meeting YOU in London. X, sj #sjpbookclub

Traveling across the world can be a tiring process. Fortunately for SJP, she had Dear Mr. M by Herman Koch in tow to make the voyage pass by.