Upgrade your gift game and support local bookshops with totes and mugs aplenty. 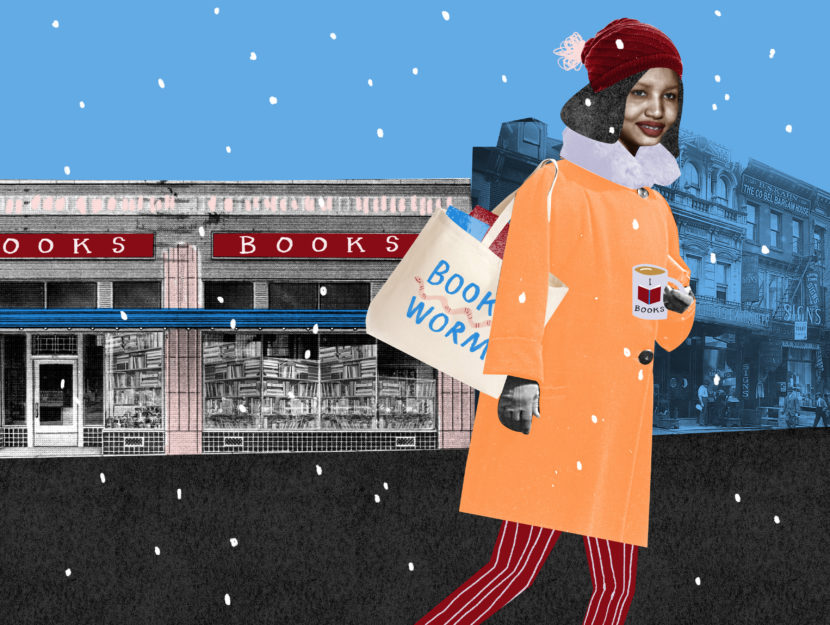 The simplest way to delight a book lover is, of course, to present them with their next read. One of the loveliest ways to present said gift is to include a memento of your favorite indie bookstore—for, as Jen Campbell puts it in The Bookshop Book, “bookshops are dreams built of wood and paper. They are time travel and escape and knowledge and power. They are, simply put, the best of places.” These gifts celebrate and support shops all over the country—because every day should be Independent Bookstore Day. 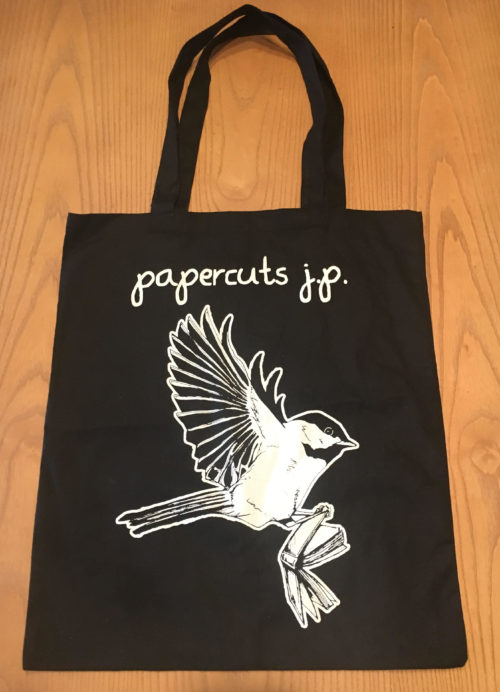 Alethea Jones’ literary chickadee performs mascot duty in the Boston neighborhood of Jamaica Plain, where Kate Layte and her team have been serving the community since 2014. Naturally, they celebrated their first birthday with a book: The Papercuts Anthology features fiction, nonfiction, and poetry by authors who visited the store in its inaugural year. (Tote: $15) 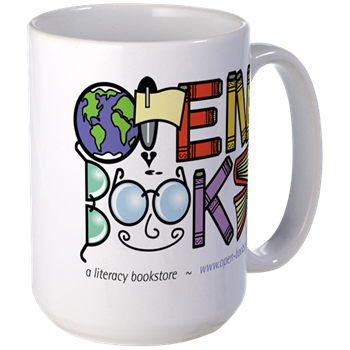 Chicago’s Open Books is made up of two brick-and-mortar stores (a flagship in the West Loop and a warehouse store in Pilsen), which both support a spectacular nonprofit social venture. Since Stacy Ratner launched Open Books in her basement in 2006, its shoppers, donors, and volunteers have helped spread literacy to hundreds of thousands of students through book grant programs, community events, and partnerships. (Mug: $15) 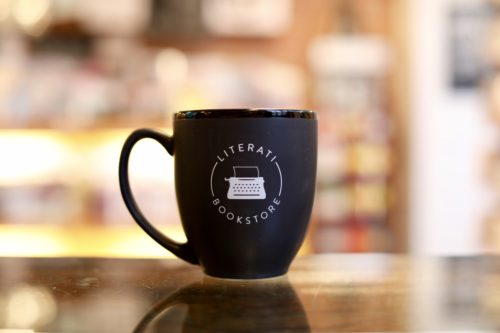 Michigan natives and bookstore owners Mike and Hilary Gustafson aren’t worried about the future of brick-and-mortar bookshops. “Contrary to popular belief,” they write, “we are not hurtling towards some digital, machine-operated future where an Amazon algorithm can decide your reading list. We believe in the whimsy that an independent bookstore provides. We believe that people still enjoy reading real books where real people work in a real bookstore.” Hear, hear! (Mug: $10) 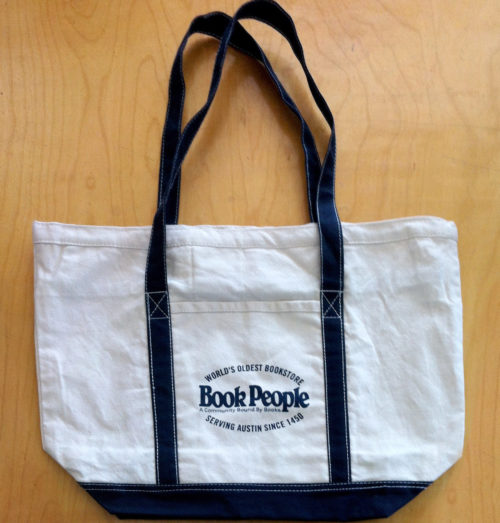 Slinging reads in the heart of Austin since 1970, BookPeople has been voted the town’s best bookstore for more than 15 years—and in 2005, it was voted Bookstore of the Year in Publisher’s Weekly. Presidents Jimmy Carter and Bill Clinton have both paid BookPeople a visit, as have countless demigods: since 2006, Children’s Outreach Coordinator Topher Bradfield has organized Camp Half-Blood sessions for young fans of the Percy Jackson books and other fantasy series. (Tote: $20) 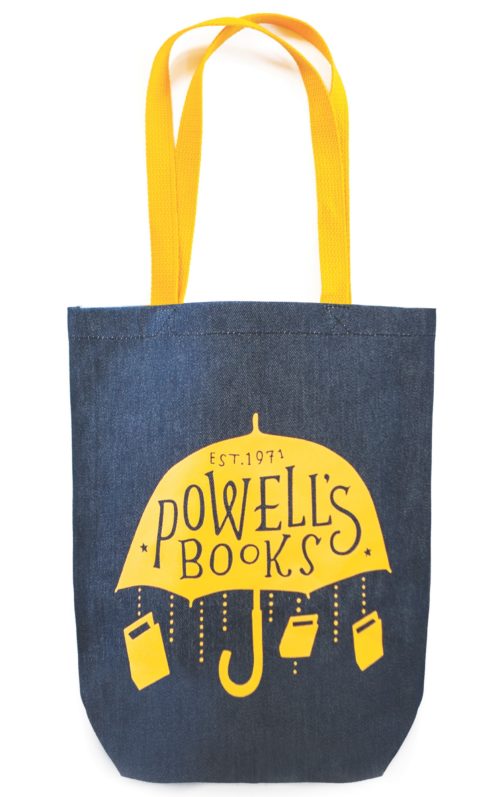 Powell’s began in Chicago in 1970, when grad student Michael Powell borrowed $3,000 to assume a lease on a bookstore. Four decades and two generations later, Powell’s is the largest independent bookstore on earth, with a mission to be “the world’s best destination for readers.” The Powell’s team (now helmed by Michael’s granddaughter Emily) hosts more than 500 events a year, as well as children’s story-times, writing workshops, game demonstrations, and book clubs. (Tote: $25) 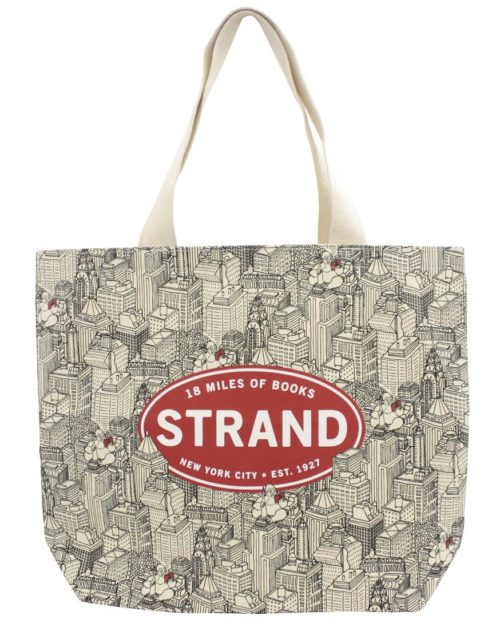 The Strand’s “18 Miles of Books” began on Manhattan’s Fourth Avenue, known in 1927 as “Book Row” (a six-block area that housed more than 40 bookstores). Ben Bass named his shop after the London street where writers such as Thackeray and Dickens gathered in the 19th century. The Strand is the only remainder of Book Row nearly a century later, but it’s keeping Greenwich Village’s literary legacy alive and well; writers like Junot Díaz and Hilton Als have stopped in for conversation, and book lovers flock to the store for everything from rare first editions to the coveted Strand baby onesie. (Tote: $25) 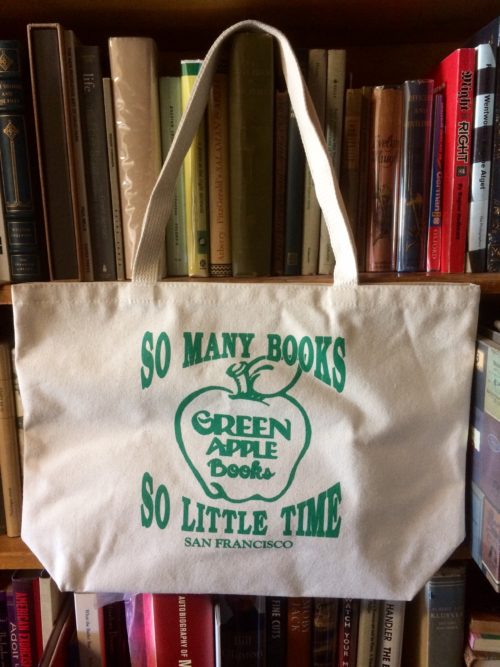 Despite a 2013 exterior facelift, Green Apple Books looks much like it did when Army vet and radio technician Richard Savoy opened it in 1967. Its relationship with the community, on the other hand, evolves all the time. Green Apple’s owners helped found the San Francisco Locally Owned Merchants Association; they serve on the boards of the Northern California Independent Booksellers Association and the Clement Street Merchants Association; and they advise Litquake, a literary festival that brings books and authors to more than 2,000 children every year. (Tote: $10) 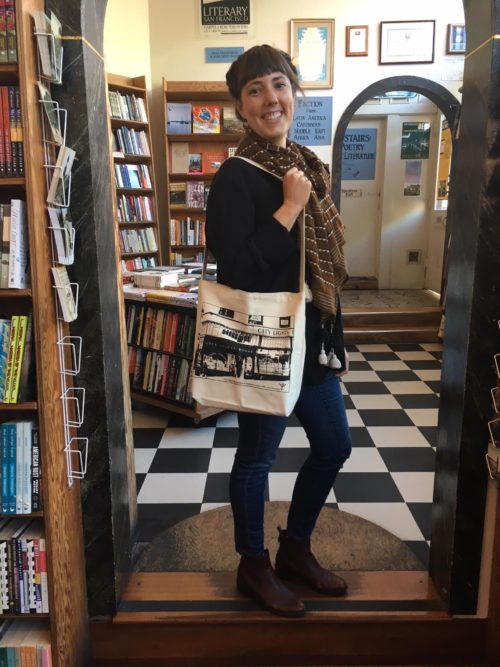 When Peter D. Martin and the poet Lawrence Ferlinghetti founded City Lights in 1953, it was America’s first all-paperback bookstore; it was also instantly an alternative-culture landmark, and busloads of tourists came to Columbus Avenue for a look at the “beatniks.” Martin and Ferlinghetti established City Lights Publishers and its celebrated Pocket Poets Series two years later. “It is as if,” Ferlinghetti said, “the public were being invited, in person and in books, to participate in that ‘great conversation’ between authors of all ages, ancient and modern.” (Tote: $19) 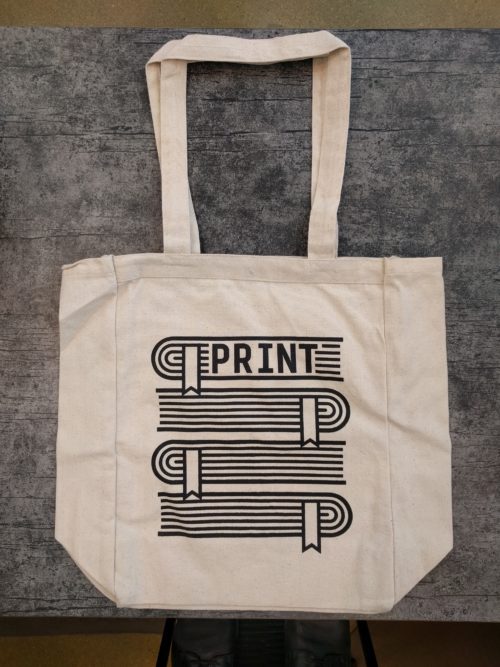 Emily Russo and Josh Christie opened Print last November for a very simple reason: “We just really love books,” Emily (daughter of the Pulitzer Prize-winning author Richard Russo) told The Portland Press-Herald. Josh’s late father, John Christie, wrote books about Maine, and Josh himself has written, co-written, or contributed to five books of his own. The co-owners also love the idea of contributing to their community: “I feel like Print has the potential to become a staple of the neighborhood,” Josh said, “and the neighborhood has the potential to become the creative heart of Portland.”  (Tote: $15) 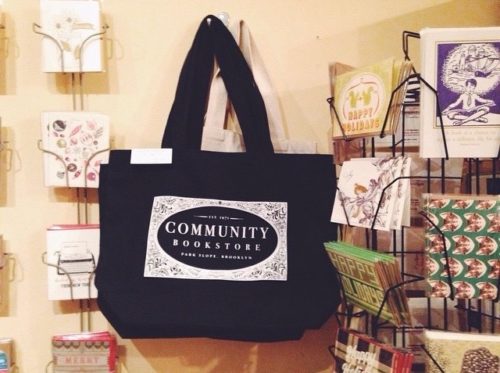 Community Bookstore, a treasure trove on Seventh Avenue in Park Slope, is full of riches: its rear doors open to a garden with a bubbling fountain, its main doors regularly welcome Brooklyn’s many authors, and its staff is full of thoughtful bibliophiles. Its most celebrated denizen, however, is small and irascible: Tiny the Usurper, Community Bookstore’s resident cat, lacks opposable thumbs but has more than 3,000 Instagram followers and appears on the cover of a bestselling Japanese book about New York felines. Your move, Jeff Bezos. (Tote: $12) 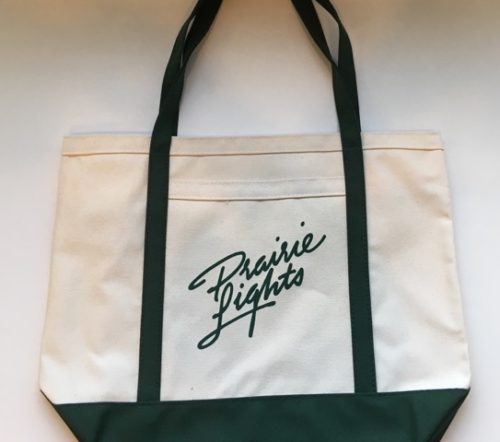 Prairie Lights shares space on Iowa City’s South Dubuque Street with a coffeehouse that was originally the site of a literary society’s meeting space, frequented by Carl Sandburg, Robert Frost, Sherwood Anderson, Langston Hughes, e.e. cummings, and other writers in the 1930s. Prairie Lights itself is, of course, a destination for artists: its “Live from Prairie Lights” reading series is streamed all over the world. (Tote: $23) 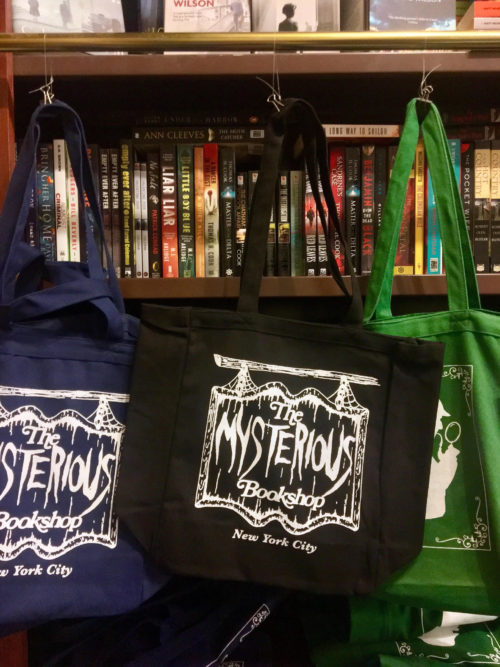 The Mysterious Bookshop is the oldest “mystery specialist book store” in the country. It’s also an invaluable contributor to the genre it celebrates: its quarterly, book-themed Bibliomystery series features novellas written exclusively for the store. It also maintains seven different Crime Clubs, in which readers receive a monthly title from the sub-genre of their choice. The Mysterious Press (founded by owner Otto Penzler in 1975 and now an imprint of Grove Atlantic) has published a slew of Edgar Allan Poe Award-winning authors, plus favorites such as Dashiell Hammett and Joyce Carol Oates. (Tote: $16) 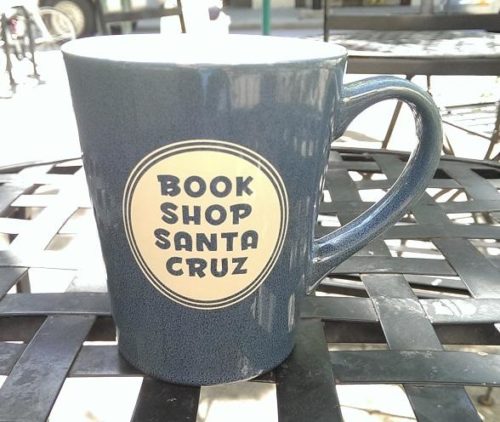 Bookshop Santa Cruz is a multigenerational family business with deep community roots: former owner Neal Coonerty and his son Ryan both served as Santa Cruz mayors. It’s also Santa Cruz’s only remaining bookstore after Logos, another beloved local institution, closed this summer after 48 years. Current owner Casey Coonerty-Protti is optimistic about the future: “We see reading habits rising in younger generations, a turn away from eReaders back to physical books, the inability to match the discovery process online [with] what you get in a real bookstore, and more and more opportunities to partner with other community groups, authors and institutions to connect books to readers in new and meaningful ways.” (Mug: $12) 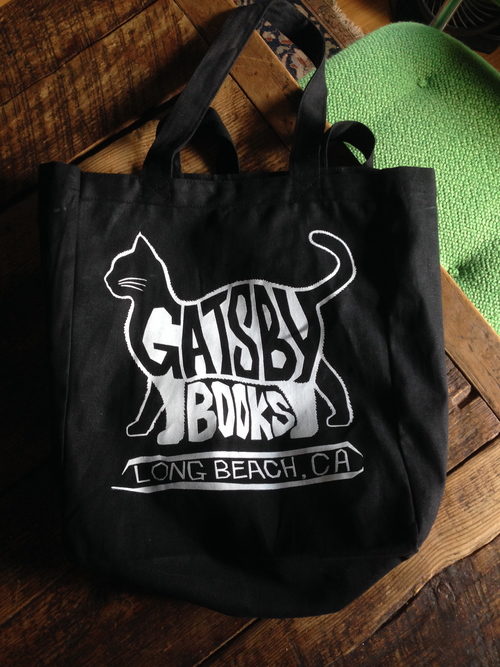 Sean Moor opened Gatsby Books in northeastern Long Beach in 2010 after years of dreaming and planning (and stockpiling books). “I realized this side of town needed something,” he told The Grunion in 2011. “I knew opening a business in this economic climate would be a struggle, but business has been better than I expected.” Gatsby Books’ tote—featuring Ruby, the friendly shop cat—is versatile, per its description: “Can be used to carry 8-10 trade paperbacks, a small cat, or a parliament of owls.” (Tote: $15) 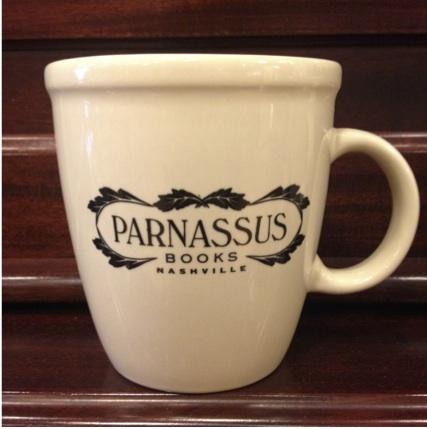 Bestselling author Ann Patchett and publishing veteran Karen Hayes founded Parnassus Books in 2011 and named it after the home of literature, learning, and music in Greek mythology. As Patchett puts it, they got into the bookselling business because “Nashvillians woke up one morning and found we no longer had a bookstore.” Patchett encourages book lovers to continue supporting their local favorites: “If what a bookstore offers matters to you, then shop at a bookstore. If you feel that the experience of reading a book is valuable, then read a book. This is how we change the world: we grab hold of it. We change ourselves.” (Mug: $14)