An Ode to Paris’s Shakespeare and Company Bookstore

Across the Seine from the Notre Dame Cathedral is a different site of religious devotion: the Shakespeare and Company bookstore.

By Arianna Davis • 2 years ago 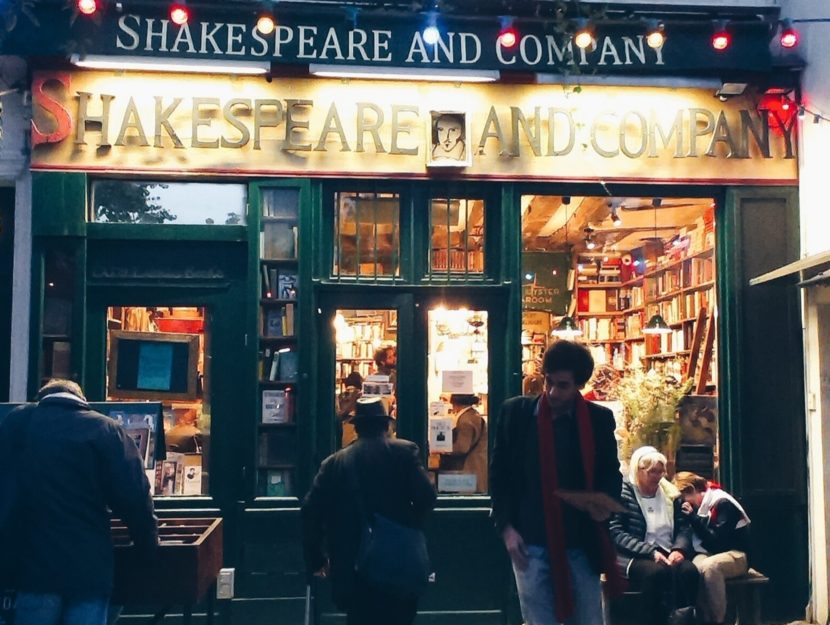 Travel from Paris’s bustling, bohemian Latin Quarter, pass the baroque fountain at Place St. Michel, then cross over the Seine River to the Île de la Cité. Most onlookers would assume you’re headed to the 671-year-old Notre Dame Cathedral to witness its breathtaking flying buttresses and stained glass rose windows. But if, like me, you’re a literary nerd, you’re likely headed to a different site of religious devotion: the Shakespeare and Company bookstore.

In a glittering city brimming with historic treasures and head-turning architecture, Shakespeare’s is not to be missed, as important a place in literary history as the oft-visited Emily Dickinson museum in Amherst, Massachusetts. The original bookstore was the bookish hub of the 1920s and 30s in Paris, helmed by expat Sylvia Beach, who originally aimed to sell English language books to Americans in Paris. But her store quickly became a lending library and one-stop-shop for eventual Lost Generation legends like F. Scott Fitzgerald, Ernest Hemingway, James Joyce, and Ezra Pound, who were all frequent visitors that dropped in to find their latest read or to receive an extra eye on their work.

While Beach’s original store was shut down during the Nazi occupation of Paris in 1941, another American named George Whitman opened a second iteration at the current location in 1951, this time catering to a new group of aspiring writers and bookworms: the Beat Generation. The new setting became home (literally—writers were known to take residence and sleep there) to the likes of Jack Kerouac, Langston Hughes, Anaïs Nin, and Allen Ginsberg (and celebrity lovers of reading like Ol’ Blue Eyes himself, Frank Sinatra). Today, bookworms make pilgrimages for readings from the likes of Zadie Smith or Dave Eggers; to learn a bit of history about writers of the store’s past; or just, simply, to find a good read.

On my own first visit to the store, I got goosebumps as I walked through the aging hunter green doorway, eager to soak up some of the leftover creative juju from, say, Gertrude Stein or James Baldwin. I navigated the crooked corners and narrow stairways with wide eyes, ducking my head so as to not hit the low-slung shelves of mismatched books as I moved from room to room. Running my fingers over musty paperbacks and dusty hardcovers, I was thrilled to find that there were books packed into every possible nook and cranny of the place: Biographies slotted beneath each staircase slat; tomes tucked behind a piano; paperbacks reaching their pages to the ceiling, only reachable with the help of a singular, creaking wooden ladder. I was so enchanted that I violently bumped into a reader with her nose buried in a book; of course, she didn’t even notice.

Like any independent bookstore in today’s world, the Amazons and Barnes and Nobles of the world have surely affected sales at Shakespeare and Co., and hawk-eyed real estate moguls have long lusted after Shakespeare’s prime piece of Parisian real estate. But whether or not they’re actually selling books, the shop is not short on visitors, thanks to its historic significance and now, the opening last year of its next door Shakespeare and Co. Café, which offers a perfectly picturesque view of the Notre Dame and serves up dishes like Flapjack Kerouac and The Bun Also Rises (touché).

Since my first visit, I’ve returned a handful of times, and despite the endless, hours-long delight of perusing thousands of books new and old, my favorite corner of Shakespeare’s is a tiny alcove with a typewriter and sign that reads: “Feel free to use the typewriter for your lovely writing/creative ventures.” Surrounding the worn wooden desk are scraps of paper with notes scrawled from visitors around the world, from English to German and Mandarin; when I returned for the second time, I tried but could not find the reminder I’d scribbled down on a map and proudly stuck to the wall: “Don’t stop writing—or reading.”

Since, while I have often run straight into walls of writer’s block, I did make good on my promise to never stop reading, and the dozen of books I’ve picked up from Shakespeare’s shelves keep me company in my New York apartment: A vintage edition of Tales of the Jazz Age; the copy of The Paris Wife that I indulgently gobbled up on a flight back from Paris; and, of course, Hemingway’s A Moveable Feast. While Hemmy’s title was intended as a dedication to the City of Lights, I like to think Shakespeare and Company is a delicious, traveling feast itself. If you happen to visit: Bon appétit.

Image credits: Parisdise_Photography/Twenty20; other photos, courtesy of the author.

ARIANNA DAVIS began her obsession with reading with The Baby-Sitter’s Club. While she’s since graduated to more adult titles (ok, so she did reread Twilight a few times…), her passion for books has remained the same. A Maryland native, she now lives in Long Island City, New York, where she likes to try new restaurants and read along the water. Her own writing has been published in Us Weekly, O, The Oprah Magazine, New York Magazine, Pop Sugar, and more. Follow her adventures on Instagram: @ariannagab