While Writing My Book, I Stopped Reading Altogether

It was hard to do, but I was worried that I’d take on the voice of another author and because of my memoir’s sensitive and controversial subject matter – raising a boy who is a girl at heart – I had to convey my most authentic voice.

By Raising My Rainbow by Lori Duron • 7 years ago

While writing Raising My Rainbow I stopped reading books.

I couldn’t take the chance of sounding like somebody else. Even though I wasn’t reading any of their works at the time, there were five authors who kept popping into my head as I wrote, keeping me company and providing inspiration and strength.

Jennifer Finney Boylan. I read She’s Not There, Boylan’s memoir about transitioning from male to female, when it was first released a decade ago. Years later, when my youngest son C.J. started playing with girl things and wearing girl clothes, I thought of Boylan and She’s Not There.

Long before C.J. came along, Boylan taught me about the fluidity and flexibility of gender and how sometimes a person’s sex and gender don’t align. Boylan’s open approach to gender and her bravery in going public to educate readers was remarkable because it has the power to make the world a safer, more understanding place for people like my son.

Diane Ehrensaft. Ehrensaft’s book Gender Born, Gender Made should be required reading for anybody with a child in their life. A psychologist who has worked with gender nonconforming children and their families for more than 25 years, Ehrensaft also raised a gender creative son. With its case studies and strategies for understanding and supporting gender creative children, Gender Born, Gender Made is as close to an instruction manual as there is for raising a child like mine.

Isabel Allende. I discovered Allende while earning a degree in English and instantly fell in love with magical realism, where magic elements are a natural part in an otherwise mundane, realistic environment. I can’t help but feel like C.J.’s gender creativeness is a magical element in an otherwise realistic environment. Because of Allende, I see that and appreciate it.

Judy Blume. Blume was my first favorite author because – although I couldn’t describe it at the time – she tackled issues that sparked thought and encouraged discussion. And, she did it all by writing seemingly simple, fun stories for kids. Our family watched the film adaptation of her book Ramona and Beezus as I began writing my book and I kept thinking that I want my book and my family and to have the feel of that movie and Blume’s collection. She was the first to show me that books can be so many things at once: innocent, informative, educational, daring, fun and full of possibility.

About Raising My Rainbow by Lori Duron 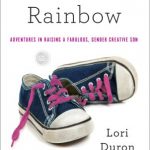 LORI DURON is the mother of two and lives with her husband and children in Orange County, CA. Duron’s blog, RaisingMyRainbow.com is the first “Mommy Blog” to chronicle raising a gender creative child, and has had more than one million readers in nearly 180 countries. She and her blog have earned the attention of a variety of media outlets including: Anderson Cooper, the BBC, MSNBC, The New York Times, The Huffington Post, The Next Family, Bitch Magazine, Newsweek, BlogHer, The Mother Company, OC Weekly, Gawker, Babble, and Jezebel. She has been named one of BlogHer’s 2013 Voices of the Year and is one of Ignite Social Media’s “100 Women Bloggers You Should be Reading.” Visit the author at RaisingMyRainbow.com.