A lifetime of communicating with my mother through books, even after she was gone.

By CRISTIN O'KEEFE APTOWICZ • 2 years ago

From as early on as I can remember, books were the way my mother and I best communicated. They allowed us to say all the things we couldn’t say. They were a secret language we shared in plain sight.

See, I grew up in a boisterous working-class household. The youngest of three and born to two full-time working parents, our household was loud. Each kid jockeyed for our parents’ attention in different ways, while each weary parent tried their darnedest to knock out their household to-do list after a long day of work. I lucked out, however, in a way my science-inclined brother and sister didn’t because I shared something very special with my mother: she and I were both readers.

My mom tried to instill a love of reading in all her kids, dutifully reading us to sleep each night, but I was the only one for whom it really took. And so, throughout my adolescence, my mother would casually hand me books she thought I might like, and I devoured them without ever second-guessing why she had chosen them. Through my elementary school years at a strict Catholic school, my mother passed me books of women heroes: saints who shaved their heads, fought for the poor, and battled kings; Nancy Drew, upending mysteries while still doing her homework; Cherry Ames novels from the 1960s, in which I was surprised to find my mother’s own tween handwriting marking the inside front covers, declaring these books hers.

She had a rule for our household’s library: if a kid keeps reading something, then she’s old enough to read it. So I was free to browse her shelves and pluck books like The Diary of Anne Frank earlier than perhaps she liked. When I came to her trembling with anger at what had happened to Anne Frank and her family, and boasting about how lucky that such a thing could never happen here, you could imagine my surprise when a historical fiction book about a girl in a U.S. Japanese internment camp appeared in my bedroom a few days later. Reading that book, aghast, was the first time I realized that books could unlock for me truths that classrooms might sidestep.

As I grew older, books became a way of gauging how my mother saw me. When I got my period at age 10, she handed down her own copy of Our Bodies, Ourselves, and it felt like the literary equivalent of a bat mitzvah: proof I had truly become a woman in my mother’s eyes. Of course, it took me five mortifying minutes of flipping through the book, with its frank discussion of masturbation and its groovy ’70s sex illustrations, to realize it was too embarrassing for me to read at that age. But it was there on my shelf for when I was ready, and it meant even more that my mother had trusted me enough to let that be my decision, and not hers.

Anyone who grows up poor or working class knows their parents have one singular dream for their children: to get an education and leave the neighborhood. Our parents were no different, and impressed upon us, early and often, that we were to live better lives than theirs. So, when I firmly announced that I wanted to be a writer when I grew up, all the parents in the neighborhood treated me as if I told them I was going to be the tooth fairy. That’s a nice idea, dear, they would sweetly say. But how are you going to make money?

My mother had grown up with her own dreams of being a writer, and I could never tell if those dreams had been crushed for her, or if she felt she allowed them to be crushed. As I grew older and my dream of being a writer remained unwavering, I could see my mother struggling. She desperately wanted to support me, but also feared what it could mean for me. Would encouraging me make her complicit in a working-class parent’s worst nightmare: your now-adult child struggling because you didn’t know how to parent them right?

But where my mother’s words were guarded, her book selections were unabashed. She casually tossed biographies of writers on my bed, saying she had heard good things, and then leave me to read about the hard roads these writers walked: the rejections, the hungry years, the successes they were unable to cope with, the writing that saved them, and the writing that haunted them. I learned every lesson I could.

She gave me contemporary books about being young and poor and making it in a city like New York City: the ramen recipes, the roommate horror stories, the graphic explanations about what you might discover in subway cars. She gave me books on writing: Anne Lamott’s Bird by Bird, Natalie Goldberg’s Writing Down the Bones, and Stephen King’s On Writing, the latter of which she caught me reading with a horrified look on my face, unconsciously covering one ear with my hair. She burst out in laughter, saying, “Oh, I know what exactly which part you’re reading! That’s a sign of good writing, don’t you think? You want to stop reading, but you can’t?”

It was then that I realized she’d read all the books she gave me. When I left home to study writing in college in New York City, I began to communicate back: sending her book recommendations I thought she’d love that I was introduced to by professors, or that I found wandering the magical shelves of The Strand. We gave each other books of empowerment, books about relationships, books about stepping into the potential, just waiting, locked up within us. We also gave each other gossipy celebrity biographies, photography books of dog breeds we loved, and guidebooks to the best brunches on the East Coast. It didn’t matter if the books were statements, or jokes, or passing fancies—what mattered was they were signs of how we were always thinking of each other. Books were our secret handshake, our laughing wink, our language of love.

When my mother passed away unexpectedly, the loss was astronomical. One of the first things I remember selfishly thinking was, I wish mom was alive for just five minutes to tell me what books I should read to get through this.

But all I had to do was look around. My mother’s gentle guidance helped me become the writer I had always dreamed of being, and I was surrounded by writers who began filling up my mailbox with books that had helped them, books they wanted me to have, books they imagined I could see myself in.

The gift my mother gave me lives on in my new life as a stepparent. I, too, have begun filling our family bookshelves with books I imagine she might need in the future, and casually introducing her to heroes and stories that once ignited my imagination. I often tell my husband that I feel closest to my mom when I’m with his daughter and can feel all the lessons my mom taught me bursting through my interactions with her.

And maybe my mother knew. Months before I would become engaged to my now-husband—and over a year before my stepdaughter and I would exchange lockets in front of our friends and family, making our relationship as official as the marriage her father and I would commit to moments later—my mother drove a heavy box to her local post office. A few days after that, she would enter the hospital and never come out.

That box was waiting for me when I came home from her funeral. When I opened it, I found all the 1950s childhood readers I had obsessively read when I was a kid. They were hers from her childhood, woefully out of time, but still filled with grit, and adventure, and—my favorite—tomboy girls who weren’t afraid to make their stand. I had loved them so hard when I was a kid, half their spines were broken, and the edges of their covers were frayed to string.

But there they were, just as I remembered them. My mother’s note read: Thought it was time to pass these on to you! I imagine someone else in your life would love to read them, too! 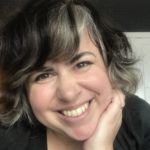 CRISTIN O’KEEFE APTOWICZ is the author of seven books of poetry, including The Year of No Mistakes, crowned the Book of the Year for Poetry by the Writers’ League of Texas. She is also the author of two books of nonfiction, most recently Dr Mütter’s Marvels: A True Tale of Intrigue and Innovation at the Dawn of Modern Medicine, which spent three months on the New York Times Best Seller List. Recent awards include a National Endowment for the Arts Fellowship, the ArtsEDGE write-in-residency at the University of Pennsylvania and the Amy Clampitt Residency. When not on the road, she lives in Austin with her family. Her latest collection, How to Love the Empty Air, is now available.