Take a tour of the fictional the city of Bulikov with this beautiful interactive map - created by artist John Petersen for Robert Jackson Bennett's novel City of Stairs.

One of the great pleasures of reading is that every reader “creates” a different book. We all bring different experiences to the page, and so we’re free to imagine these fictional worlds with characters and settings only we can see.

So it’s a real treat when an artist brings a book to life in a way that feels true. Illustrator John Petersen does just that with the city of Bulikov, the mind-bending setting of Robert Jackson Bennett’s novel City of Stairs – a sci-fi novel for people who usually don’t read sci-fi.

The city of Bulikov once wielded the powers of the gods to conquer the world, enslaving and brutalizing millions—until its divine protectors were killed. Now Bulikov has become just another colonial outpost of the world’s new geopolitical power, but the surreal landscape of the city itself—first shaped, now shattered, by the thousands of miracles its guardians once worked upon it—stands as a constant, haunting reminder of its former supremacy.

Get historical and cultural details about the once-city of the Divinities – dive in below. 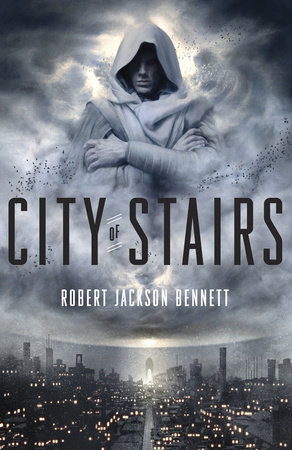 Buy The Book
Read It Forward is brought to you by a team of readers who love books as much as you do. Questions? Comments? Contact us at readitforward@randomhouse.com.

Read It Forward is brought to you by a team of readers who love books as much as you do. Questions? Comments? Contact us at readitforward@randomhouse.com.