Renowned artist and author of Above the Timberline on the magic that happens between visuals and prose.

By GREGORY MANCHESS • 3 years ago 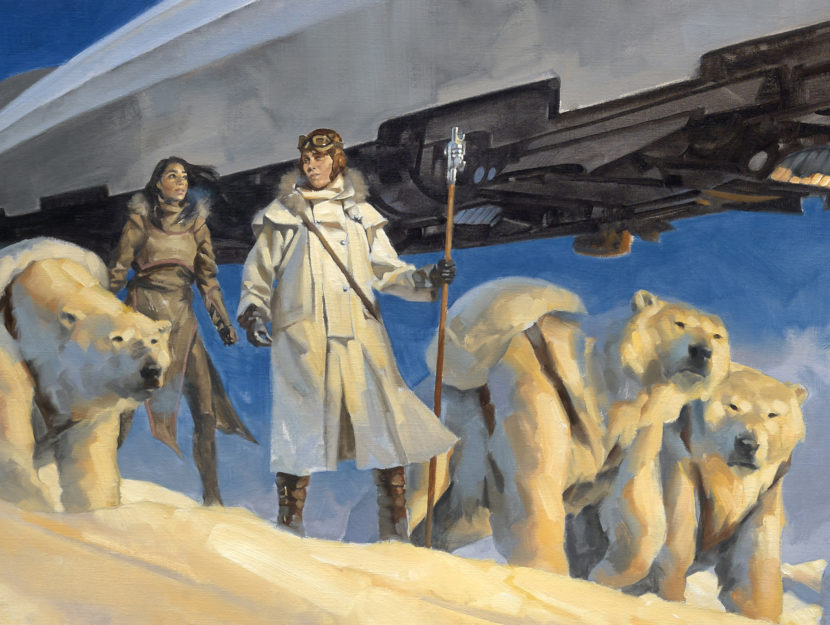 Images engage viewers in a story immediately. That’s how my original oil painting, Above the Timberline, pulled people in: by creating curiosity about the mysterious explorer on a mountainside. From that first piece I wrote the story behind the painting, and eight years later, the visual novel was published.

Sketching in coffee shops in Oregon and New York City, the whole approach began as small thumbnail sketches that formed a sequence of events and opened the world of Timberline. I placed the explorer in precarious situations, and by watching my protagonist move through these tiny sketches, his character was revealed, and so was the story.

I’d initially envisioned the book like a graphic novel, with picture panes, but I knew I didn’t want word balloons. They can distract the reader and pull them away from the moment, further separating them from a clear impression. I didn’t want an illustrated book either, with paintings mimicking only what’s in the words. I wanted the images and prose to work simultaneously, letting each build the narrative together.

So I let go of complicated pages of multiple framed images in favor of moments in the story. I chose which moments to capture for their visual impact, character expression, or story reveal. By designing simple forms across a thumbnail sketch, dynamic compositions were created to drive the narrative forward. Composition is content.

Working this way, I could tweak the prose to broaden the story in any direction I wanted, knowing the images would keep the viewer moving forward while the words provided backstory, character, history, dialogue, dangers, and so on. I could move forward and backward in time, as our minds don’t necessarily work in a linear fashion—thoughts drift around planning our future, while remembering important past events. We come to a creative work with information and experience already. With the right suggestions on the page, the reader fills in the blanks.

The same is true for the art. After working out important scenes, I dropped complicated backgrounds to focus on visual elements and created vignettes. The white of the page falls away and lets the color pop, grabbing the viewer’s eye. Using vignettes throughout the story arc while accenting with full-bleed paintings at the right moments allowed the story to breathe.

From there, I could direct where I wanted a reader to focus, the words forming a base of information, sometimes working in the background, sometimes moving forward in importance. I could use strong compositions, lighting, and color to drive a point home, or soften light and isolate elements to visually sculpt a subtle moment, or set up something to be revealed later. Dialogue, for example, expresses character well, but paintings of people talking can get tedious. This format avoided that by using a rhythmic way of expressing story. My guiding approach was, in short, to show what I couldn’t tell, and tell what I couldn’t show.

The images below reveal a little of my process, from thumbnail sketches where I composed and designed an idea to the more finished sketch, and then to the final painting built from projecting the sketch onto the canvas and redrawing over and over again until I was satisfied with the overall page.

Above the Timberline is a hybrid visual novel, with the paintings pulling you along while the prose completes the dimension. Together they express a complex world, and place the reader there with more immediacy. 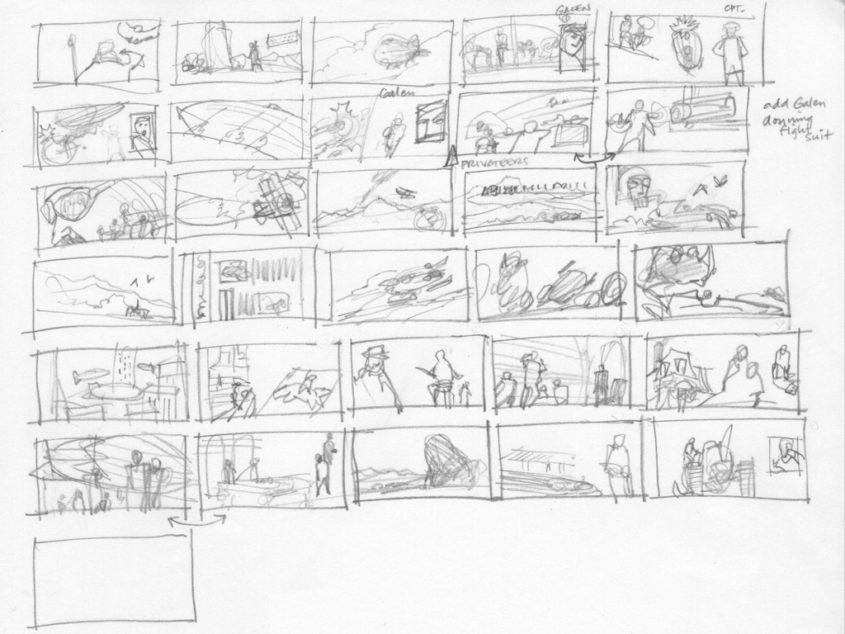 These are the thumbnail sketches that I designed to build sequences. It’s obvious how simple they are at this stage, but they’re powerful for building story.

Once the thumbnail is established for an idea, I do a photo shoot to get costumes and lighting right. Here, I made up the helmets based on old deep diver equipment.

The machines of this future frozen Earth are hints at just how desperate the people are to develop technology to get back to pre-Pole Shift. The model of the SnowTracker was built in Google SketchUp from my sketches.

I want the reader to experience the movement and action as the characters do, so I moved in close to the animals. The left to right action helps drive the narrative.

The bears of the story are wild, dangerous, and don’t talk. Still, I gave them each characteristics that can be followed. This is their introduction in the novel, so I presented them as portraits.

They may be wild, but I portrayed them to be approachable—on the edge of intelligence we can’t understand, but want to.

Science is important to the future, too, because it portends our survival. This world revolves around people understanding what it takes to survive, and that demands cooperation from all.

On this spread, the conversation and description in the prose has very little to do with the image. The painting foreshadows without words, but we understand the sequence from the picture working with the prose and providing broader information.

A character study of relationships within the tale. 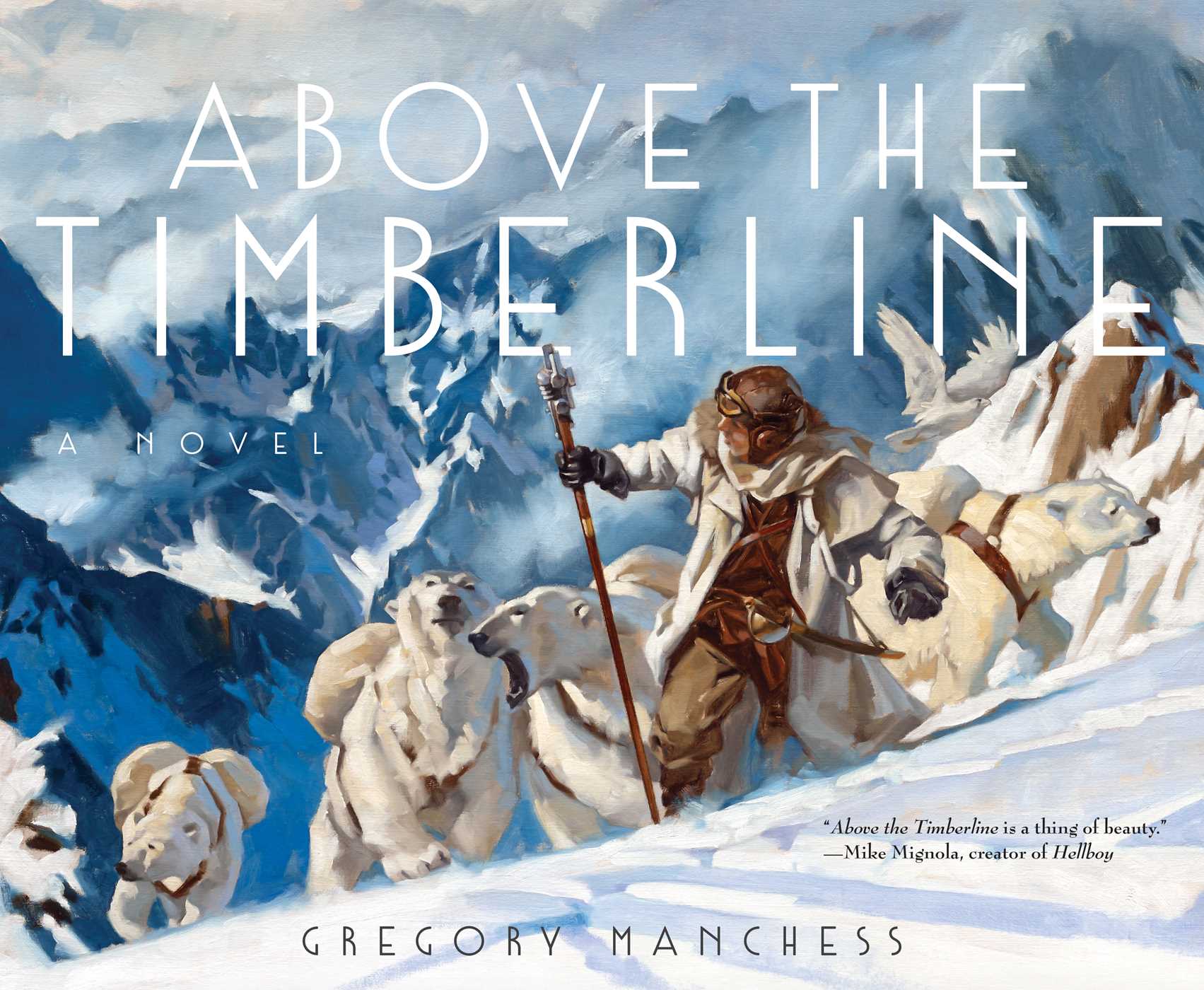 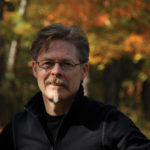 GREGORY MANCHESS is an American illustrator. His work had appeared on Major League Baseball World Series Programs, Time, Newsweek, The Atlantic Monthly, Playboy, Smithsonian and The National Geographic. He lectures frequently at universities and colleges nationwide and gives workshops on painting at the Norman Rockwell Museum in Stockbridge, MA. He teaches at the Illustration Master Class in Amherst, MA.

GREGORY MANCHESS is an American illustrator. His work had appeared on Major League Baseball World Series Programs, Time, Newsweek, The Atlantic Monthly, Playboy, Smithsonian and The National Geographic. He lectures frequently at universities and colleges nationwide and gives workshops on painting at the Norman Rockwell Museum in Stockbridge, MA. He teaches at the Illustration Master Class in Amherst, MA.