These are the books author Emily Barton thinks are awesome—including a few that inspired her new novel The Book of Esther.

By Emily Barton • 5 years ago 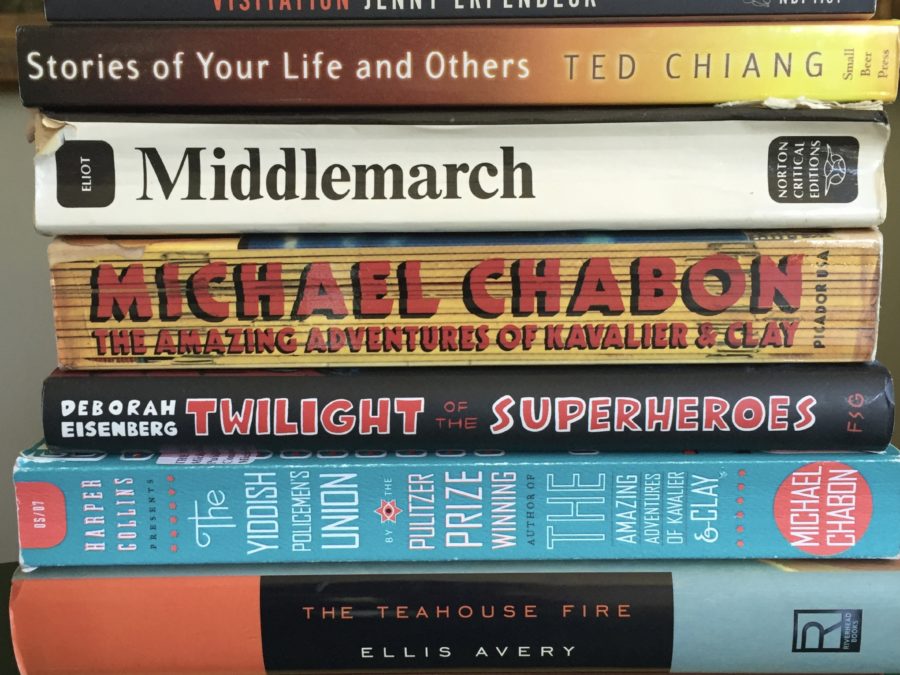 Emily Barton is a master storyteller. Like Michael Chabon or Jorge Luis Borges, Barton excels at creating worlds out of the depths of her imagination and her latest novel (the last two were both named New York Times Notable Books of the Year, NBD) is no exception.

The Book of Esther imagines a very different Eastern Europe in August of 1942 than the one we know from the history books. In Barton’s rendering, the Khazar kaganate, a tribe of Jewish warriors that really did exist in the Middle Ages, are still around and their isolated colony exists in the space between a belligerent nation to the west that the Khazars call Germania—and a city the rest of the world calls Stalingrad. When Germania begins to invade Khazaria, Esther, the daughter of Khazar’s chief policy adviser, knows that Germania’s aggression towards the Jewish population is not merely another battle, but represents a dangerous shift in thinking. She decides she must fight for her people, but as a young woman knows she cannot and so journeys to a group of Kabbalists in order to be turned into a man, to better convince her nation to take up arms and fight the enemy.

The Book of Esther is a bad-ass combination of war saga and fantasy and Barton’s heroine is like Joan of Arc and Hua Mulan rolled into one. When asked to share a snapshot of her bookshelf, Barton selected, as she says, “a few books that inspired me while writing The Book of Esther, and others I simply think you should read because they’re great.”

So, what are you waiting for? Add these ten titles to your TBR pile right now. 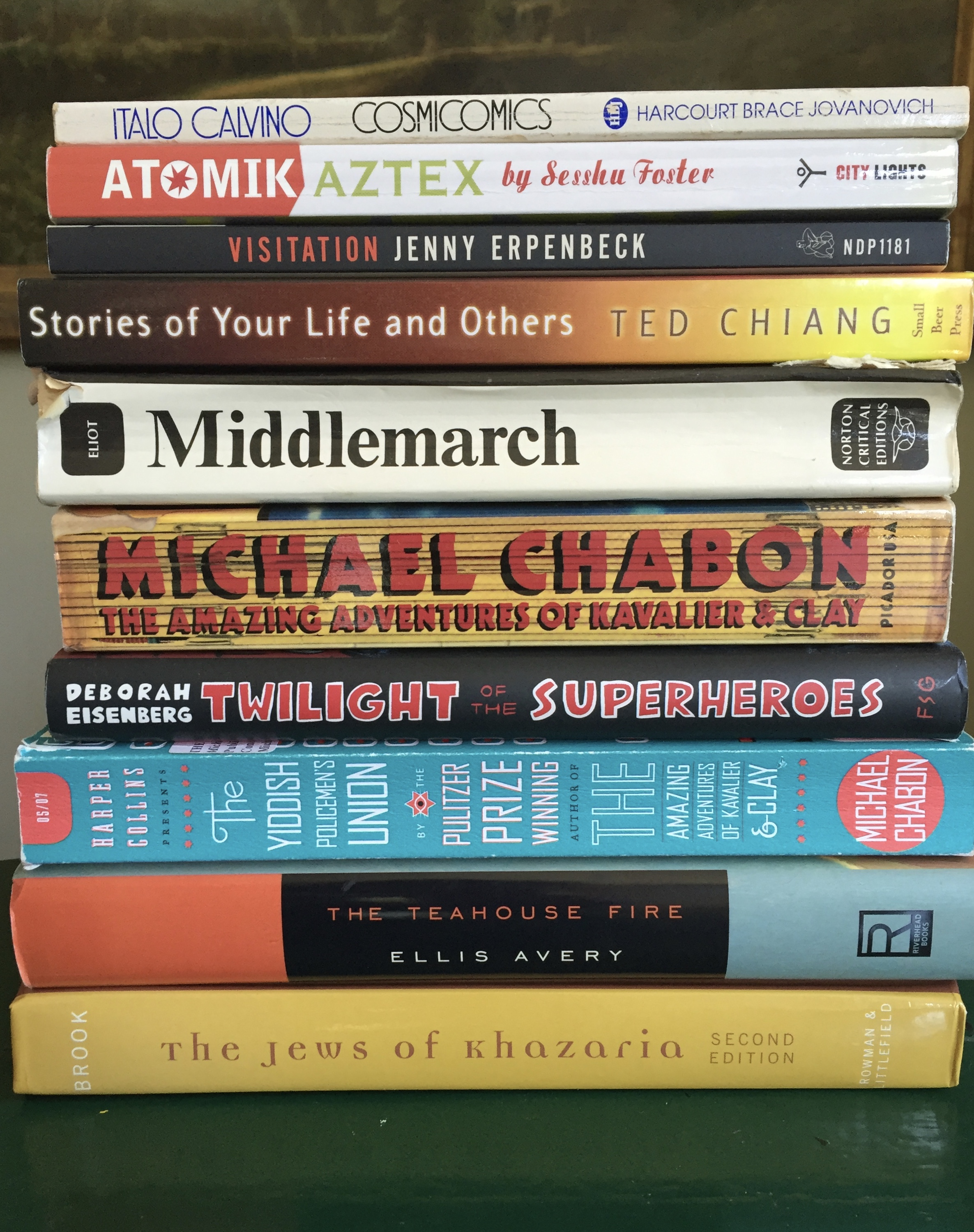 The Jews of Khazaria by Kevin Alan Brook

This is the most authoritative book in English about the historical Khazars. It’s full of facts, maps and archaeological data. It was so helpful in figuring out how to make up my novel’s world. Much of the “research” for my novel was imaginative (figuring out how to cross-breed a horse with a Vespa to make a mechanical horse, say), but for all things Khazar, Brook was my touchstone.

The Teahouse Fire by Ellis Avery

An American orphan in nineteenth-century Japan has to live by her wits, and she apprentices herself to a traditional teahouse. The sights, smells, and textures of the teahouse are so vivid, it’s easy to get lost in this book’s imaginative universe. And I loved the surprise happy ending!

This book was hugely inspiring to me when writing The Book of Esther, for many reasons: the alternate Jewish universe of Sitka; Chabon’s panache at bending genres; his ability to tell a great, involving story while engaging with big issues. When Yiddish Policemen’s Union came out, I got to review it for the New York Observer. That’s one of the best review assignments I’ve received in almost twenty years of reviewing books.

Twilight of the Superheroes by Deborah Eisenberg

Deborah was my teacher and continues to be an inspiration in every regard: the beauty of her sentences, the depth and breadth of her subject matter and point of view, her sense of humor, her personal style. This book of stories includes the most intelligent writing about 9/11 I’ve read and goes on to depict life at the beginning of our century with remarkable insight and pathos.

The Amazing Adventures of Kavalier & Clay by Michael Chabon

This might have been the first novel I ever read that broke all the rules about genre. At the time, many people thought of comics as being “not serious,” and Chabon simultaneously elevates them to the level of “high culture” while poo-pooing that whole idea. Also, the Golem of Prague is a main character; I thought about him often while writing my own golem characters.

Because it’s the best novel yet written in English. The best plotted, and with the most complex and well-rounded characters. I’ve read it more times than I can count, as you can see by the state of this copy. It’s also full of Post-Its because I gave a lecture about it last year.

Most novels follow a character or group of characters. This one follows a place: a single house in East Berlin over the bloody and turbulent course of the twentieth century. Eerie and profoundly astute about history, Visitation expands our ideas about how a novel can represent and critique the world.

Imagine that the Aztecs defeat the Conquistadores and go on to become the dominant world culture. Then imagine that the commonly accepted view of time is that it’s cyclical and that the lingua franca blends Nahuatl with Spanish and English. Then picture a main character who is at once an immigrant worker in a 1940s Los Angeles meat-packing plant and a famous Aztec warrior. This is that book. It’s wild.

Calvino’s imagination is so ebullient; in seemingly every book, he tries out new concepts and forms with such apparent joy. These stories, each based on a principle of physics, are my favorites. Once, when I was just starting out as a writer, I was giving a big, fancy reading. I was nervous already, and someone came up to tell me that William Weaver, Calvino’s translator, was mortally ill but in the audience. I tried to thank him publicly for giving English-speaking readers the gift of Calvino’s work, and I got so choked up I could hardly speak.

Stories of Your Life and Others by Ted Chiang

A few years ago, I had the pleasure of walking around the AWP conference with my friend and colleague John Crowley. We stopped at the Small Beer Press display and talked to Gavin Grant, who hand-sold me this book. “You’re really going to like this,” he said. Gavin and his wife, Kelly Link, publish some of my favorite writers (including Crowley himself; and this is not even to mention how much I love Kelly’s work), so I took it right home and started reading — and boy, was he right. These are sci-fi stories by an incredibly intelligent writer with a strong sense of craft. Each one has enough world-building that it could, if Chiang wanted it to, become a novel; but there’s something so satisfying about the kind of imagination that’s at once both rigorous and profligate enough to let each one stand on its own as a short story. 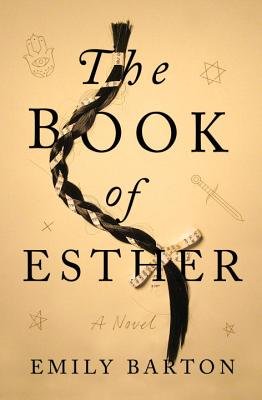 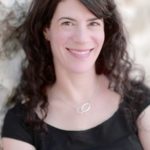 EMILY BARTON is the author Brookland and The Testament of Yves Gundron, which were both selected as New York Times Notable Books of the Year. She has received grants from the Guggenheim Foundation, the National Endowment for the Arts, and the Sustainable Arts Foundation. Her essays, short stories, and reviews have appeared in Story, Conjunctions, The Massachusetts Review, Tablet, The Los Angeles Times, and The New York Times Book Review, among many other publications. She lives in the Hudson Valley with her husband and sons.

EMILY BARTON is the author Brookland and The Testament of Yves Gundron, which were both selected as New York Times Notable Books of the Year. She has received grants from the Guggenheim Foundation, the National Endowment for the Arts, and the Sustainable Arts Foundation. Her essays, short stories, and reviews have appeared in Story, Conjunctions, The Massachusetts Review, Tablet, The Los Angeles Times, and The New York Times Book Review, among many other publications. She lives in the Hudson Valley with her husband and sons.