Stephan Talty Reveals Surprises in Escape from the Land of Snows

Bestselling author Stephan Talty travels the world researching great untold stories that he brings to life with a journalist’s precision and a novelist’s empathy. His works of nonfiction read like page-turning novels full of unforgettable characters. He is the New York Times bestselling author of Empire of Blue Water and The Illustrious Dead. His newest book, Escape from the Land of the Snows, tells the thrilling story of the young Dalai Lama’s harrowing escape from Tibet. Readers who are new to the Dalai Lama’s life story will be amazed. Readers who know the story well will be surprised.

We sat down with Stephan and asked him, “What surprised you most in researching Escape from the Land of the Snows?” Here’s his fascinating response.

There are two things that surprised me in researching Escape from the Land of the Snows. And together they form a contradiction:

The future Dalai Lama, Lhamo Thondup, was a young boy from a remote village in eastern Tibet who was discovered at the age of two. But what startled me was to find that he wasn’t especially religious as a young man. He wasn’t spiritual, either. Far from it.

Until the age of 15 or 16, His Holiness cared more about war games than he did the Buddha. He had a ferocious temper, growing so angry at times his body shook as he stood on the shiny floor of his winter palace. Religious studies bored him so much he would make up adventure stories about the people in them.

The young Dalai Lama was as far away from embracing his spiritual destiny as one can possibly imagine. Though his body had displayed certain telltale signs at his discovery, he was a completely average boy of the 1950s, obsessed with movies and guns and desperate to get away from his minders.

But at the same time, he lived a life of splendid isolation. Of ceremonies that did not end. The Dalai Lama’s days resembled no other on earth. He literally observed the world through a telescope, which he used to watch the prisoners that were kept in a prison at the foot of his palace walls.

One was not allowed to look him directly in the eye; his subjects were instructed to dip their gaze at the sight of him. Touching him was sacrilege, as was turning one’s back (The preferred method of exiting his presence was to shuffle backward silently toward the door, head bowed.) Every moment of his existence was scripted, airless, formalized in a way it’s almost impossible to imagine now.

So the man we know today, this spontaneous Dalai Lama who laughs and reaches for your hand and seems to shoot off hot beams of empathy, didn’t always exist. First the young man had to fall in love with the Buddhist scriptures, which he did. Then he had to shed the ceremony of the ancient Tibetan court like a badly-fitting old robe, which he began to do after crossing the Himalayas on his way to freedom in 1959.

The Dalai Lama may be a reincarnation of the leaders who preceded him. But those lamas would barely recognize their own reawakened selves. The Dalai Lama is very much his own invention, 14th in a line of compassionate mystics but really something brand new. 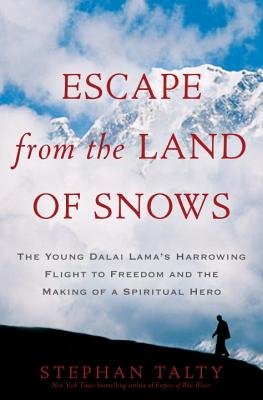