Sara J. Henry on Her Debut Thriller Learning to Swim

While standing on the deck of the Lake Champlain ferry bound for Vermont, Troy Chance sees a small boy tossed over the side of a ferry going the opposite direction. Without thinking, she jumps to his rescue, setting off a chain of events that see her embroiled in a kidnapping plot with tendrils in the Adirondacks and Vermont as well as Ottawa and Montreal.

Download an excerpt of Sara J. Henry’s Learning to Swim.

Read It Forward: Where did you get the idea for Learning to Swim?

Sara J. Henry: I was driving along Lake Champlain and looking out across the misty, cold water. For some reason, I envisioned a woman on the deck of the ferry that crosses to Vermont, observing what she thinks is a small boy plummeting into the water from the ferry going in the opposite direction.

I could see her standing near the railing, and I could feel her making the split-second decision to dive into the frigid lake after the child. Who was that woman? Who was the child? Why did she dive in after him without thinking? What happened next?

This was the novel I always wanted to write – and that moment changed my life. I couldn’t forget that scene, and when I sat down to write a novel, it became the opening chapter of Learning to Swim. While the book has gone through many revisions since the first draft, that opening chapter has remained virtually unchanged.

“Troy Chance—an everywoman hero who women will admire and men will want to meet.” —Michael Robotham, bestselling author of Shatter

RIF: Tell us about Troy Chance, the woman on the ferry.

SH: As a joke, I told someone that Troy is a cross between Jane Eyre and Travis McGee (the hero of John D. MacDonald’s gritty series) – and there’s more truth to that than I realized. I grew up reading suspense novels by Mary Stewart and Charlotte Armstrong, all featuring an ordinary woman in extraordinary circumstances, and I wanted to create a modern and independent version of that woman.

Troy is a freelance writer, single, distant from her family, without a lot of close friends. She has doubts and fears like the rest of us; she knows her strengths and her weaknesses, but she has blind spots. She’s focused on doing right and getting to the bottom of things at all costs, and she’s fiercely protective of the child she rescues.

RIF: What’s your connection to the “other New York”?

SH: When I lived in the Adirondacks and told people I lived in New York, they immediately envisioned New York City – many people don’t realize there’s a very different New York upstate, with tiny towns, lakes and trees, and mountains instead of skyscrapers.

I lived in Lake Placid, a town that held two Winter Olympics, in a big house on Main Street and rented out rooms to athletes. I worked as a sports reporter in nearby Saranac Lake, which seemed to me a Norman Rockwell sort of town, just a little frayed around the edges. I covered sports I’d never seen and some I’d barely heard of: bobsled and luge, lacrosse and rugby, sled dog races and three-day canoe events.

I loved the spirit of the small towns, the softball teams everyone played on, the parades and firework celebrations they all showed up for. So, of course, when I wrote a novel, my main character lived in a big house on Lake Placid’s Main Street with multiple roommates and worked as a sports reporter for the local paper.

“A mesmerizing confluence of mystery, intrigue, and suspense, with undercurrents of deep personal drama.” -Jamie Ford, bestselling author of Hotel on the Corner of Bitter and Sweet

RIF: How would you describe Learning to Swim?

SH: You could call this book suspense. You could call it a psychological thriller or literary mystery, or a combination of these. Someone told me this book is a lot of things: a crime novel and a suspense novel; a woman’s book and a love story; the story of a lost child and the story of self-discovery. I like to think of it as a book that will speak to a lot of people.

“Readers will be cheering for Troy Chance as she deftly navigates the treacherous waters of betrayal and loss, and they’ll be looking forward to seeing her again when the book is closed.” —Lisa Unger, bestselling author of Fragile

Sara J. Henry is a major new talent with a haunting debut – her heroine, Troy, is unforgettable, and we’re thrilled that she will be back in another book, set in the Adirondacks. 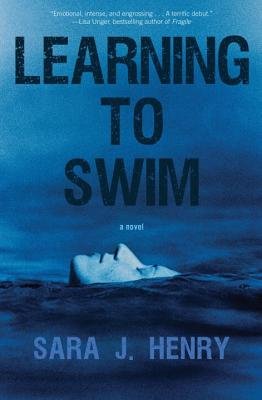