Nick Trout, Author of Ever By My Side, Gives Thanks for His Animal Mentors

In Ever By My Side, New York Times bestselling author Nick Trout waxes nostalgic about his boyhood in a working-class British suburb, where a large German shepherd named Patch was the perfect companion to a scrawny, bookish boy in a neighborhood full of bullies. He writes about his relationship with his father, the man who nurtured Nick’s dream of becoming a vet, even though he couldn’t have imagined the career would lead his only son 3,000 miles away.

He describes wooing his future wife and stepdaughter and (perhaps most difficult of all) their ornery cat. And he offers a poignant chronicle of his daughter’s devastating diagnosis of cystic fibrosis and how a little yellow Labrador retriever played an important role in bringing joy to their family when they needed it most.

ENTER TO WIN: Visit Read It Forward on Facebook to enter for the chance to win a copy of Nick Trout’s Ever By My Side!

Read It Forward asked Nick about the inspiration for Ever By My Side. His answer reminds us to be grateful for all the people and animals in our life who help us along the way.

Do you have a pet who has changed your life? Leave a comment below – we’d love to hear your story!

A few years ago, when I was writing the acknowledgments section for Tell Me Where It Hurts, I thought long and hard about how I got to this point in my life and who I needed to thank. The process made me realize how often we fail to give credit where it is due.

And so, as soon as I recovered from the excitement of opening a cardboard box packed full of my first published book, I shipped a copy across the pond to England, to one of my teachers from high school, a man named Harry Smith.

Harry was an exceptional mathematician, but he was really teaching “lessons in life.” I was blessed to be a member of his final class before his retirement and we had not been in touch for over twenty years. I knew he had to be getting on in years, in his mid-eighties at least, and I prayed he was still alive because I felt as though I never took the time to acknowledge the part he played in shaping my formative years.

Thankfully, some weeks later, I was rewarded with a letter in tiny, neat cursive: “Dear Nicholas, of all the mail I received in the lead up to Christmas, your letter stands out in my memory, and I thank you most sincerely for it. Each time I read it I feel a sense of pride in the realization that something of note was, after all, achieved in the time I spent teaching.”

My third book, Ever By My Side, germinated from a similar desire to recognize and celebrate some of the other unsung mentors of my life, both on two legs and on four. I’m talking about family – the one I grew up in and the one I have created – and all those animals along the way that I came to think of as my own pets. Ever By My Side is my attempt to share those moments in a lifetime in which the actions of a human or an animal changed my perspective and left me with a lesson I would never forget. In sharing their legacy, I’m really saying “thank you” for all the opportunities that have shaped my life. 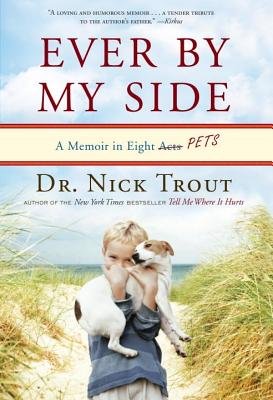