The paperback version of fathermothergod came out recently, on a late summer day as I sat in the waiting room of a walk-in clinic with one of my kids.

The irony, and the balance, were not lost on me: I spent the first half of my life raised by Christian Scientist parents who shunned medicine for religious reasons; I’ve spent the second half, so far, racking up typical and not-so-typical medical bills for a family of six. My husband and I joke that on any given week we are the loss leader at Oxford Health Plans, and these last few weeks have been no exception.

I frequently marvel at the irrefutable truth that my siblings and I were spared such trips to the pediatrician’s office for strep tests and X-rays. I have always chalked it up to luck. Christian Scientists – including, while they were alive, my parents – would take issue with this attribution. “Don’t you think it’s possible,” they would say, eyes twinkling knowingly, “that you’ve been beautifully, divinely protected?”

No, we were lucky. If one of us had gotten appendicitis during childhood we would never have been seen by a doctor, and might not be here to tell about it. My appendix did rupture, but not until I was twenty-eight and quite okay with “resorting to medicine.”

Last summer after the hardcover edition of fathermothergod came out, I spoke at length with an elderly couple, former Christian Scientists, who, many decades before, had lost their only daughter to appendicitis. She was twelve. They have only recently begun to speak openly about the horrible ordeal; their voices tremble with their nearly unbearable burden of regret.

This week’s trip to radiology was the result of a brotherly skirmish over flat-screen rights. Foot-to-face (disputed) followed by fist-to-head, and, as the orthopedic surgeon subsequently explained to his young patient, “Fist-to-head never wins.” My thirteen-year-old had punched hard enough to fracture a hand bone near a growth plate, but not hard enough to displace it. Conclusion: splint for four weeks, with the caveat that if he injured it again, surgery.

“What if I reinjure it and don’t get surgery?” my son asked the doc.

“You could end up with one hand smaller than the other.”

At this, I held up my two hands, fanning out my fingers, for the doctor and my son to see. I recalled a game of bombardment (a dodgeball derivative) when I was in fourth grade. I lost the game for my teammates when Gordy Olson drilled me with a gym ball and I failed to catch it. Instantly, I felt, and heard, the crack. I started praying silently, even though what I wanted to do was cry out in agony. I said nothing to my teacher, or to my schoolmates, and cradled my finger as inconspicuously as possible until I could get home.

My right pinky remained swollen and painful for weeks while my parents and a Christian Science practitioner prayed for me, affirming my pinky’s God-given, immutable perfection. Eventually it healed, more or less. Less, to be precise. It is about a half-centimeter shorter than my left pinky, the knuckle gnarly and angled inward. Since I’m a lefty, it’s no big deal. Had it been an arm or a leg instead of a pinky injury, the half-centimeter difference might have been more like an inch, and my life might have been impacted more negatively.

I’ve been deeply touched by letters, emails, and other messages from people who have read fathermothergod. Some of these letters read like condolence notes – beautifully crafted and heartfelt, some from people who knew my family growing up, and others from total strangers. Many letters have come from those with their own complicated stories of growing up in a controlling religion – or sometimes a rigid family dynamic—that they needed to flee.

The most moving messages have come from others raised in Christian Science. These have been both reassuring (we are not alone) and agonizing to read. I heard from a man who attended Principia College at the time of the measles outbreak there in 1985, which took the lives of three students. Some shared stories of family members’ untreated illnesses, including ear infections, resulting in permanent hearing loss, and diabetes, which led to death. Many recounted standing by, helpless, wrestling with a parent’s choice to forego medical treatment in favor of sole reliance on prayer, sometimes with dire consequences. In every single one of these cases, the children were told, repeatedly, that illness and injury were not real, were only illusions.

One woman wrote to me: “One of the saddest and, to me, most damaging aspects of CS is that the mandate of silence and denial separates us and denies us the close community that is the only thing that may help make the unbearable bearable.”

I dedicated the hardcover version of fathermothergod to my sister, Olivia, and brother, Sherman. I wish I’d thought of this sooner – like, six months ago, when my paperback editor at Random House, Meagan Stacey, asked if I wanted to make any additions or changes to the text. (I’m not very organized and I’m a bit of a procrastinator, and this didn’t dawn on me until just now. Note to self: next book, I’ll remember, but that might be in 2036. . . .)

So, to my new friends: kindred spirits who have shared their own and their loved ones’ stories, those who have taken the sometimes monumental step of coming out of isolation and breaking the silence. To you, I dedicate the paperback edition of fathermothergod.

LUCIA GREENHOUSE, a graduate of the Emma Willard School and Brown University, lives with her husband and four children in Westchester County, New York. Fathermothergood is her first book and is now available in paperback.

To arrange a call-in or Skype chat with your reading group, contact Lucia at LuciaGreenhouse.com. 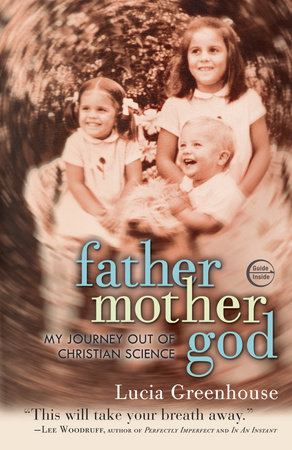