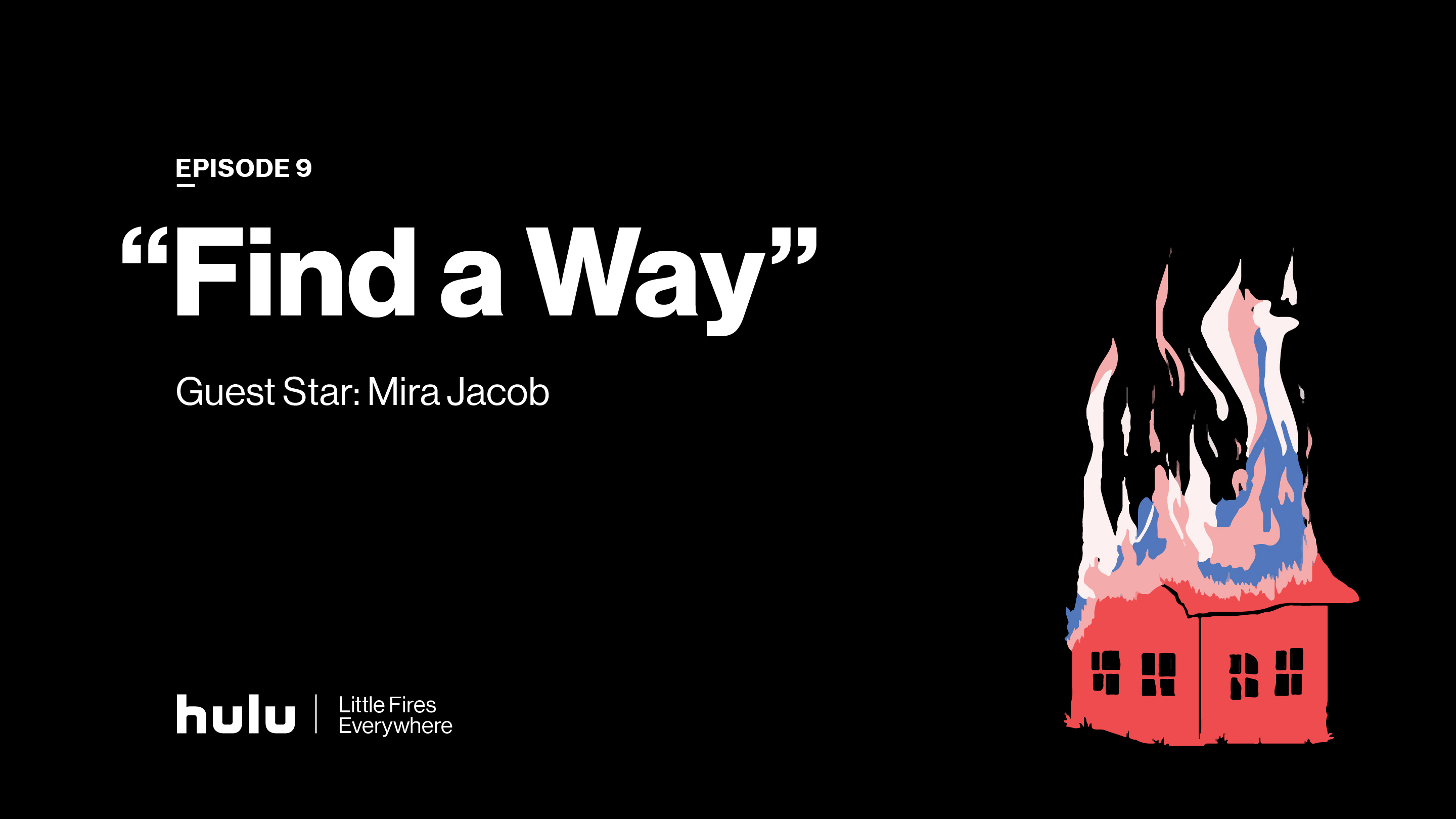 On this episode of The Adaptables, Abbe and Emma chat about episode eight—the finale!—of the Hulu adaptation of Celeste Ng’s bestselling novel, Little Fires Everywhere. They’re joined by Mira Jacob, author of Good Talk and The Sleepwalker’s Guide to Dancing.

Abbe, Emma, and Mira discuss baby birds, trans-racial adoptions, being surprised by the adaptation of a book we’ve all read, those pesky fires everywhere, Elena’s redemption and more.

I was one of the lucky first readers of Little Fires Everywhere. I picked it up and the next time I looked up, it was night. —Mira Jacob

TV show recap:
-A flashback episode to the early ‘90s when the Richardson children are young. They are running a lemonade stand, and Izzy tries to rescue a baby cardinal.
-Izzy tries to throw out all of her girly clothes, floral curtains, and Keds that she no longer wants to define her.
-Pearl and Mia are still at odds. Pearl asks Mia to call her dad and tell him about her.
-Mia does try to call the Ryans and Madeline picks up and correctly guesses who it is.
-Elena: still meddling. Asks her doctor friend to break confidentiality about Bebe, but discovers Lexie/Pearl’s file instead.
-Linda gives her testimony and the judge goes into a week of deliberation.
-The judge rules in favor of the McCulloughs and they are awarded custody of Mirabelle.
-Mia and Pearl make up, at Trip’s urging. But they realize they can’t stay in Shaker and leave without saying goodbye.
-Izzy sees Mia and Pearl leaving the key and tries to chase after them, but it’s too late.
-Izzy snaps and grabs a gas can to light her belongings on fire. The other three Richardson children see her, and try to stop her, but then what Elena says causes them all to light matches and start little fires everywhere. Izzy runs away.
-Pearl and Mia leave Shaker and Pearl decides she wants to see her grandparents.
-Bebe steals her daughter back from the McCulloughs and makes a run for it.
-Elena takes the blame for the fires and goes to the duplex hoping Izzy is there, but she isn’t. She finds the cardinal feather in Mia’s artwork and cries over the ruination of her perfect life and the loss of her daughter.

1. 🔥 Mia and Pearl’s fire burning for the entire episode
2. 🔥 The story of the prairie fire
3. 🔥 Bill’s lighting of a cigarette
4–9. 🔥 Little. Fires. Everywhere! 3 of the 4 Richardson children strike matches and light blazes.
10. 🔥 Bill witnesses his house on fire.

Send us an email or voice recording to AdaptablesPod@Gmail.com. What did you think of the finale? Are you watching the show? Is Hulu’s Little Fires Everywhere adaptation a successful adaptation of the book?

NEXT UP: We’ll start Season 2 next week with Hulu’s adaptation of Normal People, with guest Michelle Hart, Assistant Books Editor at O, The Oprah Magazine.