Reader’s Guide for What You Left Behind by Samantha Hayes

If you read thrillers with your book club, tell us about your favorite in the comments.

What You Left Behind is a psychological thriller packed with twists and turns that will keep you hooked until the very end. It’s taken nearly two years for the residents of Radcote, a sleepy village in rural Warwickshire, to come to terms with a spate of teen suicides in the area.

But then a young man is killed in a freak motorcycle accident, and a suicide note is found in his belongings. When a second homeless boy is found dead on the railway tracks, the locals fear the nightmare is starting up again.

DI Lorraine Fisher has just arrived in the village for a relaxing break with her sister. But soon she finds herself caught up in the ongoing police investigation, and when her nephew, Freddie, disappears, she knows she must act quickly. Are the recent deaths suicide or murder? And what is it that her nephew knows that has put him in such danger?

In order to provide reading groups with the most informed and thought-provoking questions possible, it is necessary to reveal certain aspects of the story in this novel. If you have not finished reading What You Left Behind, we respectfully suggest that you wait before reviewing this guide.

1. The story is told from different points of view. Which voice did you most relate to and why?

2. The book opens with a motorcycle accident, but we don’t know who the passenger is until the end. Did you suspect anyone? If so, who and why? How did knowing it was Sonia alter your perception of her?

3. Early on in the story, Lorraine discovers Freddie is withdrawn and depressed. Do you think Jo and Malc have been good parents? What could they have done differently? How did this contribute to Freddie going missing?

4. How do you think the local suicide spate affected Jo’s judgment when she suspected Freddie was harming himself? Should she have spoken out sooner? What are your views on talking openly about mental health issues and self-harm?

5. What did you think about Gil? Do you think that he is misunderstood? What effect did his autism have on the story? How did his condition affect Lorraine’s investigation?

6. Tony is charming and reliable, and he cares and provides for his family. When do the cracks begin to appear in his character? How did your thoughts of him at the end compare to those at the start of the book?

7. Discuss how Tony exerts such power over his victims.

8. Discuss Sonia’s relationship with her husband. Do you think she was abused? If so, how?

9. Some strong themes are presented in the story—mental health, self-harm, online bullying, homelessness, sexuality, and autism. Discuss how these issues affect the main characters.

10. Do you think Lorraine was right to get involved in a case outside of her area? What factors prompted this choice?

11. Did the book conclude as you’d imagined? 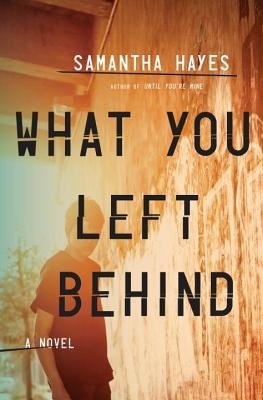 SAMANTHA HAYES grew up in the West Midlands, left school at sixteen, avoided university and took jobs ranging from being a private detective to barmaid to fruit picker and factory worker. She lived on a kibbutz, and spent time in Australia and the USA, before finally becoming a crime-writer. Her writing career began when she won a short story competition in 2003. Her novels are family-based psychological thrillers, with the emphasis being on 'real life fiction'. She focuses on current issues, and when she writes, she sets out to make her reader ask, 'What if this happened to me or my family?' With three children of her own, Samantha is well-versed to talk about how the aftershocks of crime impact upon families and communities.