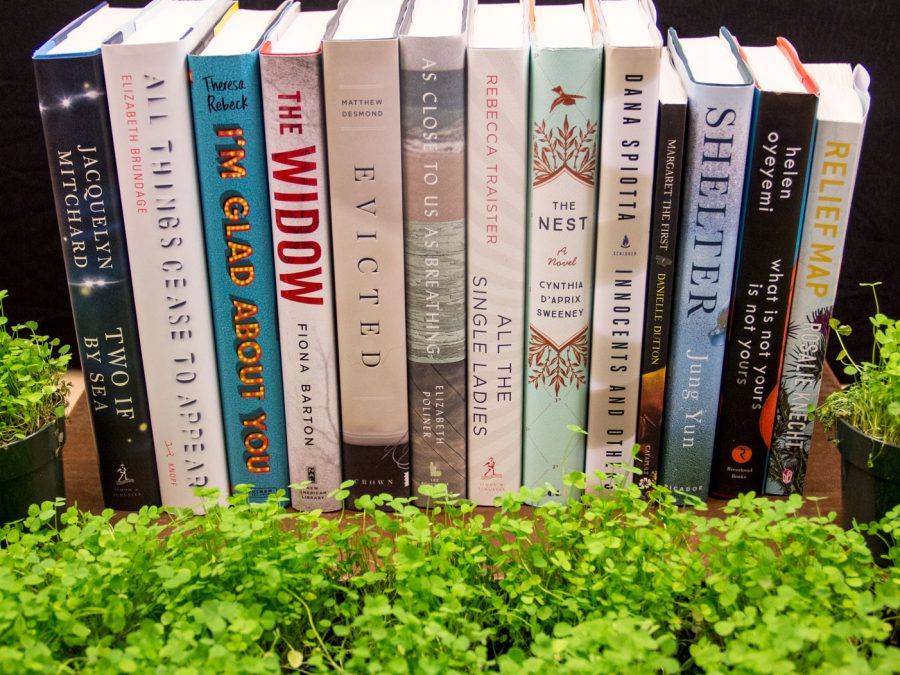 March is a tricky month—the promise of spring taunts us, but in most of the country, it remains bitterly cold. Daylight Savings brings more evening light, but throws our sleep schedules out of whack. In Shakespeare’s play Julius Caesar, a soothsayer famously warns Caesar before his assassination to “beware the Ides of March,” and we only have St. Patrick’s Day and March Madness to help distract us before April showers start to bring May flowers. So, what is one to do during the not-quite-warm days? Why read, of course! An incredible crop of books were published this month, and while many have a dark edge to them, we guarantee that once you pick these up, you won’t be able to stop reading until spring feels like it’s officially here.

Click on the images to shop our picks, then let us know in the comments what you’ve been reading! 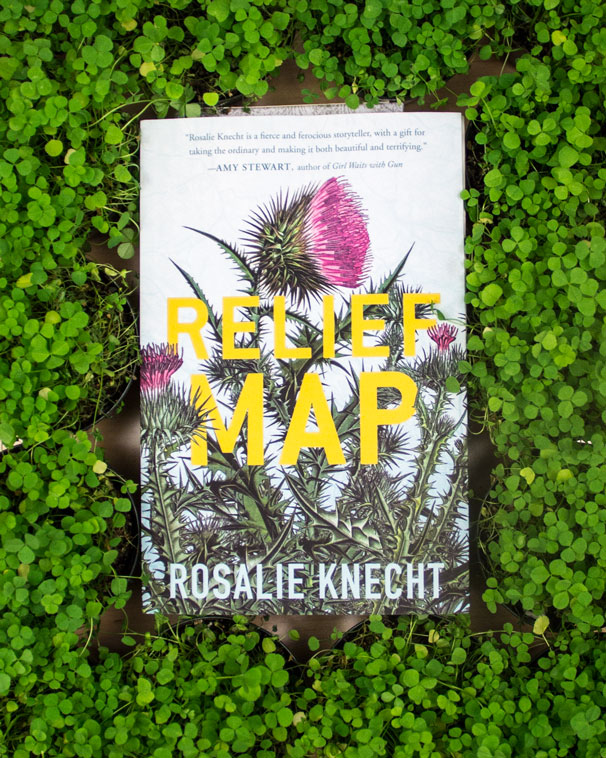 The forgotten rust-belt town of Lomath, Pennsylvania is hot and boring—at least until there’s a fugitive on the loose. That’s the premise for Rosalie Knect’s gripping debut novel, which follows sixteen-year-old Livy, listlessly wiling away the days of summer vacation, until the FBI descends on the town, sealing off bridges and cutting electricity in their manhunt for an international criminal. The days stretch on, and the paranoia becomes palpable as townspeople begin to turn on one another and carefully try to conceal what they do not want exposed. One thing is for sure: by the end of the summer, Livy’s life will be irrevocably changed. (Tin House Books)

Margaret the First by Danielle Dutton 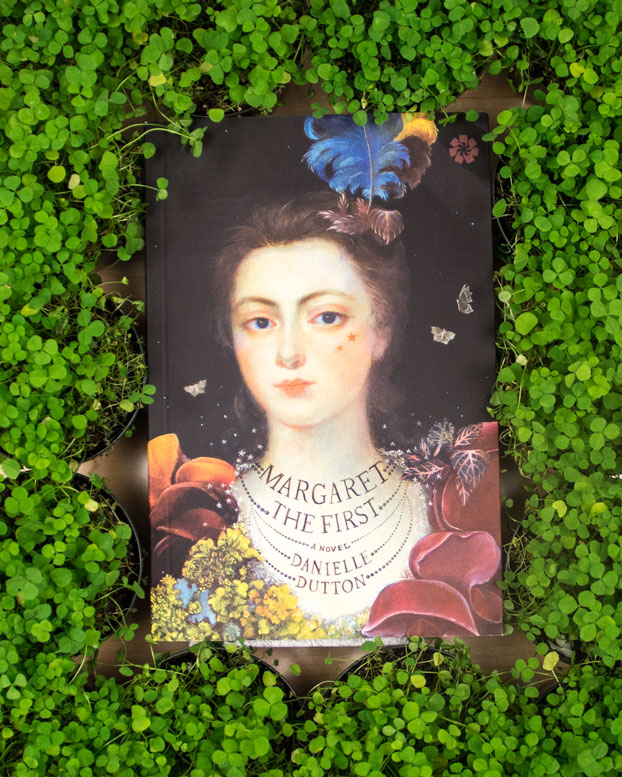 Margaret the First, Danielle Dutton’s second novel, is a bold work of historical fiction that feels thoroughly modern. In it, she dramatizes the life of Margaret Cavendish, one of the earliest—and most prolific—female writers. Born a Duchess in Britain, Margaret served as an attendant to the Queen, until King Charles I was overthrown and she was run out of town and exiled to France. It was there she met her husband, William Cavendish, who supported her writing—which included poems, feminist plays and utopian science fiction—and her unconventional spirit. Dutton’s prose sparkles and her inner examination of this trailblazing writer is a joy to read. (Catapult) 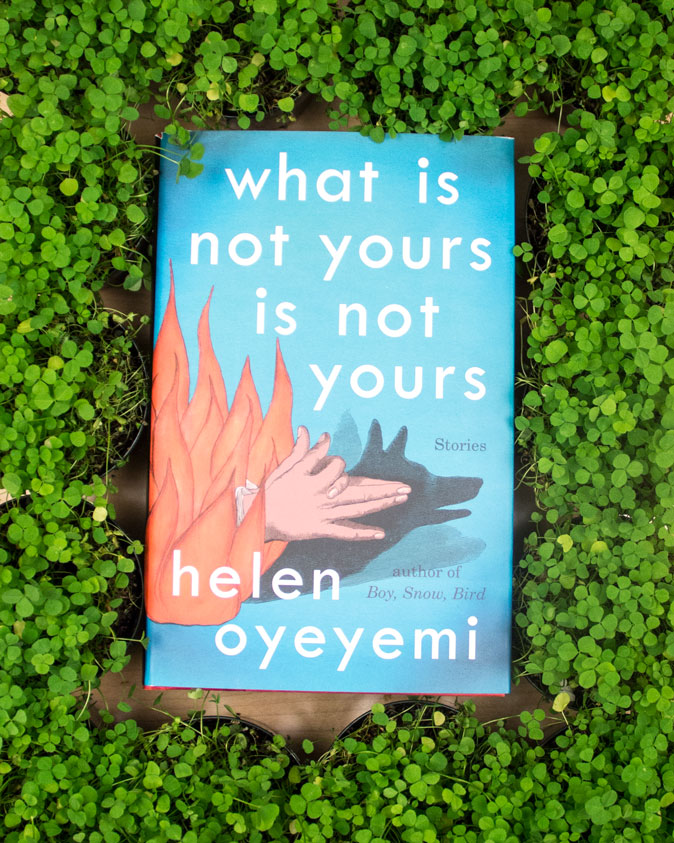 After five critically acclaimed novels, including Boy, Snow, Bird and Mr. Fox, Helen Oyeyemi returns with her first-ever collection of short stories. As is Oyeyemi’s tradition, these stories—tinged with magical realism—are all delightfully bizarre and all, in some way, involve a key. There is a key that unlocks a door to a mysterious library; one that opens a heart of a puppeteer and one that keeps a mystical diary shut—and for good reason. Oyeyemi’s storytelling is unparalleled and this collection, which unfolds upon itself, revealing layer after tidy layer, explores the things we keep secret and the things that, though we wish would remain hidden, are revealed. (Riverhead) 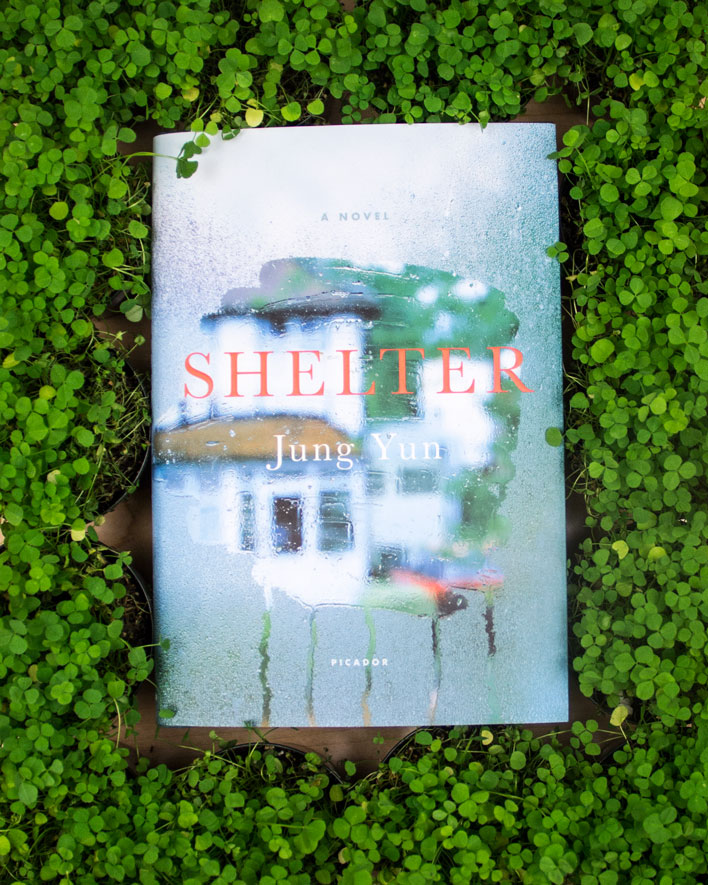 Fans of Celeste Ng’s Everything I Never Told You will be drawn to Jung Yun’s riveting debut novel that centers on a debt-saddled couple—Kyung Cho and his wife Gillian—who finally agree to meet with a realtor to discuss selling their over-mortgaged house. But when they look outside, they discover May, Kyung’s mother, emerging from the woods, naked and badly beaten. His wealthy parents have been the victims of a brutal crime and though he’s tried to distance himself from them and his unhappy childhood in recent years, Kyung must open the doors of his house to his parents and live as a family once again. Family drama and violence simmer just below the surface and cause deep-seated instability and violence to arise in Kyung. This tension—along with many others—make the plot of this psychological novel thrum along insistently. (Picador)

As Close to Us As Breathing by Elizabeth Poliner 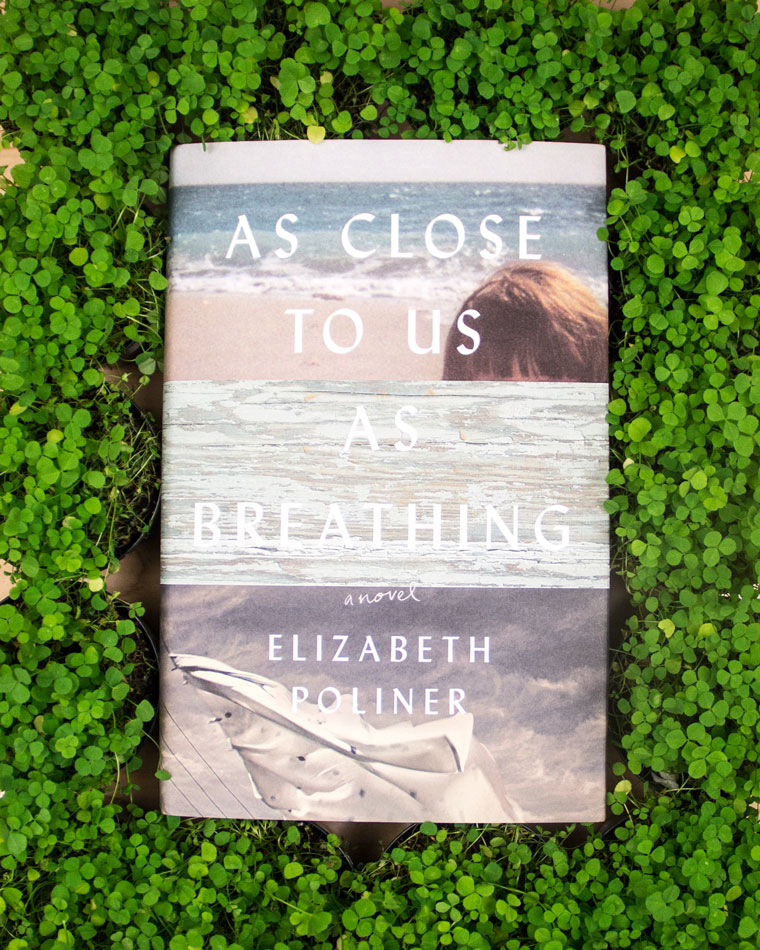 It’s June of 1948 and Molly’s family is gathered at a salt-water-warped beach cottage in Connecticut, along a curved stretch of sand nicknamed “Bagel Beach,” for the Jewish families that summer there. But all is not well. The very first line of Poliner’s novel reveals that a terrible tragedy has occurred: A horrible accident leaves Molly’s brother Davy dead. What follows is a stunning family narrative about the varying ways each family member grapples with the aftermath of Davy’s death and the guilt, heartbreak, loss and atonement that relentlessly nags at them for the rest of their days. This sweeping novel, which effortlessly swoops back and forth in time, is a startling meditation on the depth and complexity of human emotion and understanding. (Lee Boudreaux Books)

Evicted: Poverty and Profit in the American City by Matthew Desmond 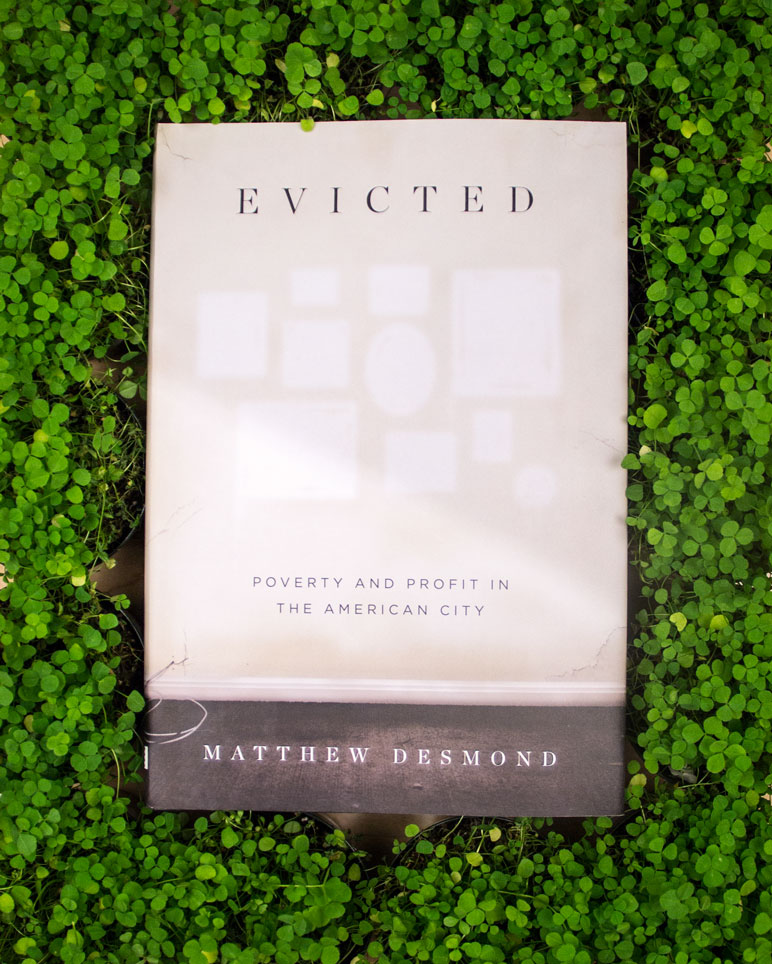 In the vein of Barbara Ehrenreich and Katherine Boo, Harvard sociology professor Matthew Desmond’s research into poverty and the housing crisis in America is fully immersive. In Evicted, he takes us into the poorest neighborhoods in Milwaukee, even living in a trailer park himself, bearing witness to the swift and unfeeling eviction process that forces single mothers and struggling families into shelters, onto the streets or into increasingly dangerous neighborhoods. Told through personal stories and firsthand accounts, Desmond argues that eviction and homelessness actually beget poverty, not the other way around. This incredibly well-researched and important narrative is a must-read; it will not only forever change how you look at inequality in this country, the tales of resilience in the face of hardship will inspire. (Crown)

All the Single Ladies: Unmarried Women and the Rise of an Independent Nation by Rebecca Traister 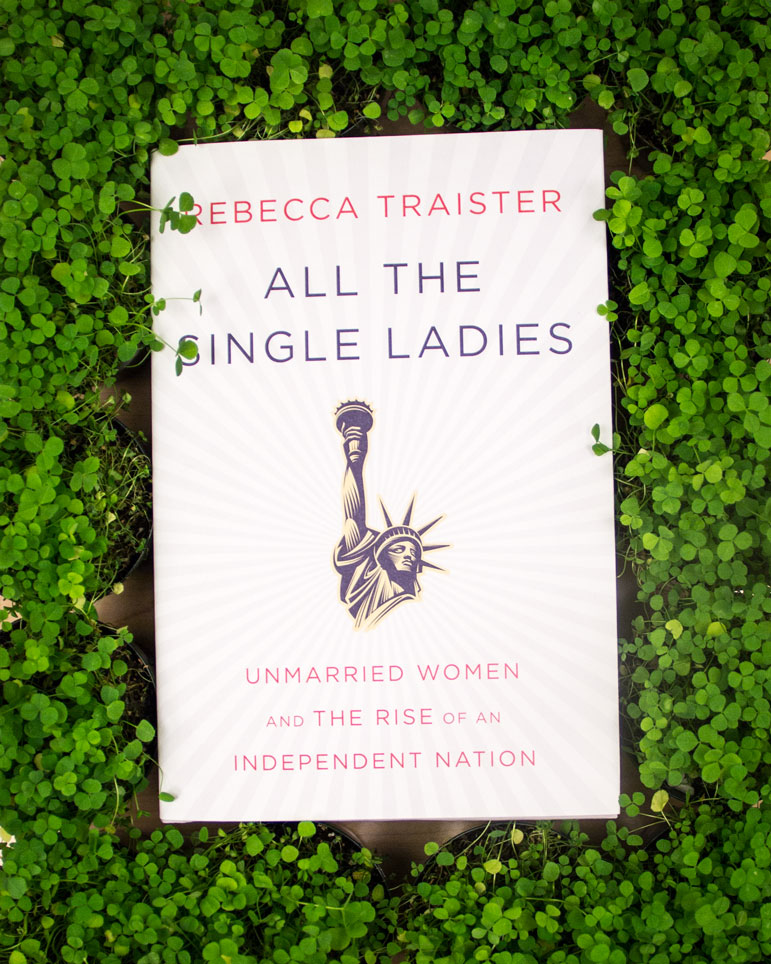 In her groundbreaking and thoroughly researched new work, Rebecca Traister set out in 2009 to write a book about what she thought was the 21st century phenomenon of the American single woman. What she discovered, however, was that, throughout history—from the labor laws the emerged after the Triangle Shirtwaist Fire, to the temperance movement as a reaction to spousal abuse—the unmarried woman has been instrumental in bringing about social change. And today’s single women are no different in the way they’re changing the world. This entertaining and dynamic book belongs on the shelf next to Gail Collins and Gloria Steinem. (Simon & Schuster)

All Things Cease To Appear by Elizabeth Brundage 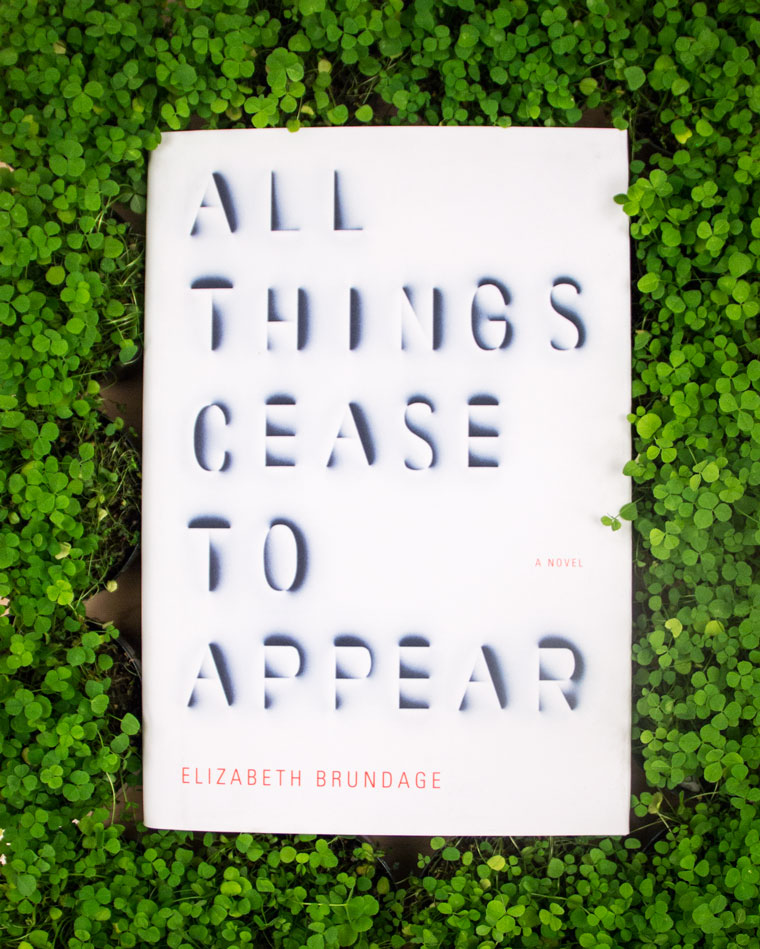 If In Cold Blood and Gone Girl had a literary baby, it might not even rival this chilling and creepy mystery. This crime-cum-ghost story, told in flashbacks, reveals the history of The Hale’s, the first owners of the aging farmhouse outside of Albany, who commit double suicide in the house after their dairy farm goes out of business, orphaning their three boys. A year later, Professor George Clare, his wife Catherine and their young daughter Franny move into the cursed house, which still holds the ghostly presence of Mrs. Hale and soon, Catherine is found murdered. George is suspected, but protests his innocence, and the case is remains unsolved. It is only when Franny returns to the house years later does she uncover what happened to her mother. (Knopf)

The Widow by Fiona Barton 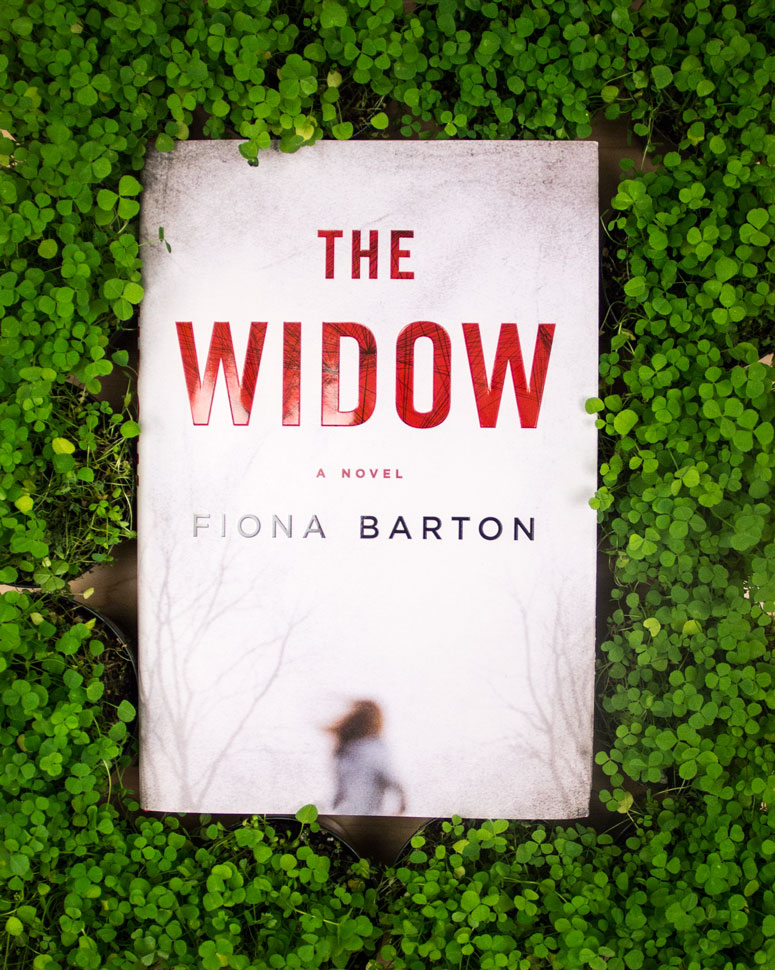 Jean Taylor has always strived to be the picture-perfect wife—even if it meant staying silent about a terrible crime her husband was suspected of committing. But now that her husband is dead, Jean finally feels free to share what she knows. This debut thriller is dark, with a child pornography ring and the abduction of a two-year-old at the center of the plot. But the book seems to hinge more on a character study about single-minded obsession and obscured truths for the sake of “politeness” or societal expectations than on the mystery itself. And you won’t see the plot twist coming. (New American Library)

Innocents and Others by Dana Spiotta 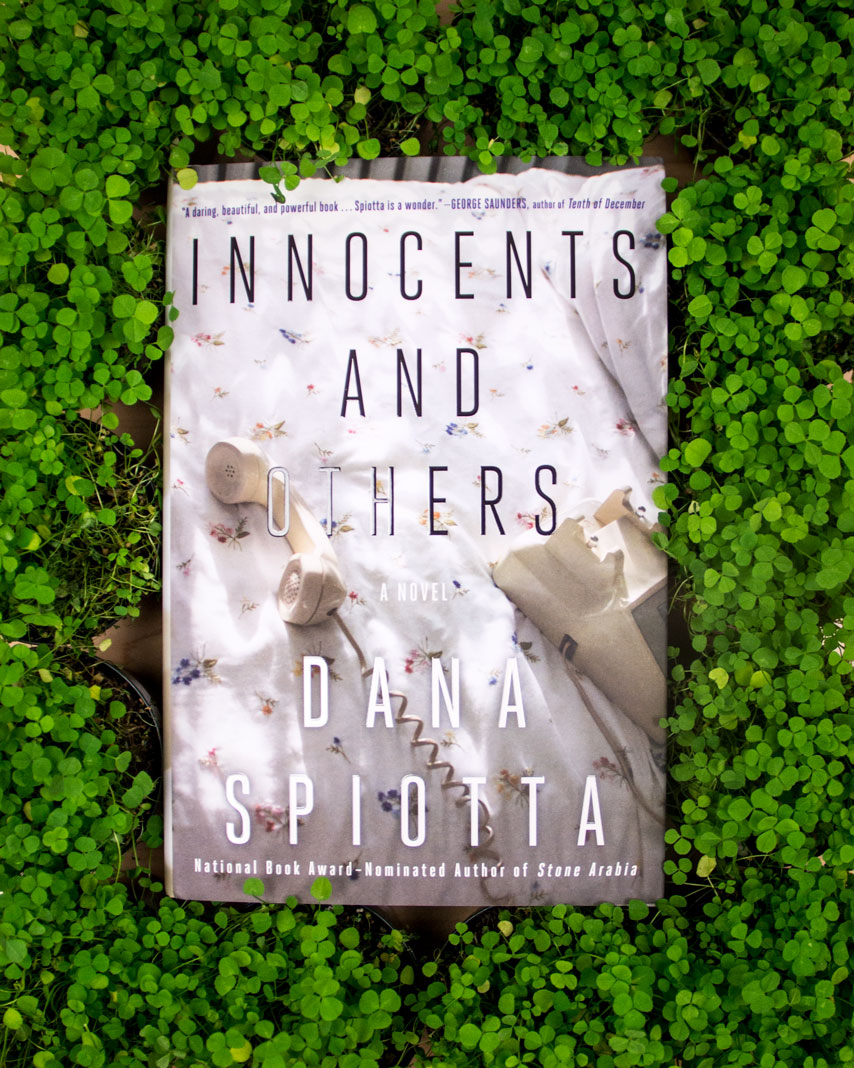 Meadow and Carrie are best friends who came of age in Los Angeles in the 1980s and both went on to be filmmakers—though their aesthetics are wildly different. Meadow’s documentaries are provoking and bear a sharp emotional edge; Carrie elects to go the safer, more commercial route, producing popular films. The women turn their cameras on a variety of subjects, including Jelly, an older, more off-kilter woman who acts a sort of phone con-artist, cold-calling important men and seducing them into babbling honesty with her charisma and “active listening” skills. Jelly (of course) makes the two women level with one another about their shared history, their lost innocence and subsequent reinvention. Spiotta’s writing style is like a carefully edited documentary: a stitching together of seemingly disparate scenes that create a work of art. (Scribner)

The Nest by Cynthia D’Aprix Sweeney 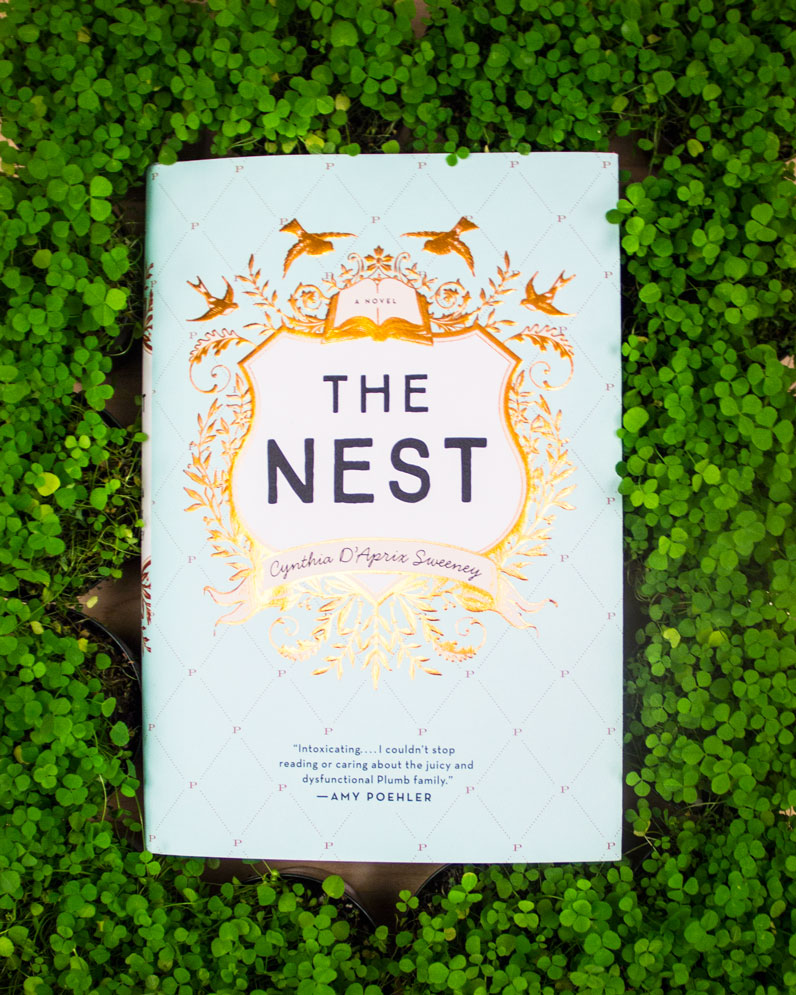 In Cynthia D’Aprix Sweeney’s whimsical debut, the four Plumb siblings are squabbling over “The Nest,” the inheritance they all believe they’re due to receive once the youngest turns 40 years old. But apart from the derision between them, there’s another problem: most of the funds have been squandered on keeping the eldest Leo’s recent scandal—a drug-addled fling with a barely legal waitress that leads to a horrific car crash—out of the newspapers. The stakes are high—albeit hidden—for the other Plumbs: Beatrice is a writer who never gets her second novel off the ground; Jack owns a failing antique store and has placed a secret mortgage on his partner’s summer house in order to make rent; Melody is facing impending college tuition for her twins. This juicy novel, which manages to playfully skewer the publishing world and helicopter parenting, is fast-paced and fun. This one is already much-talked-about and for good reason. (Ecco)

Two If By Sea by Jacquelyn Mitchard 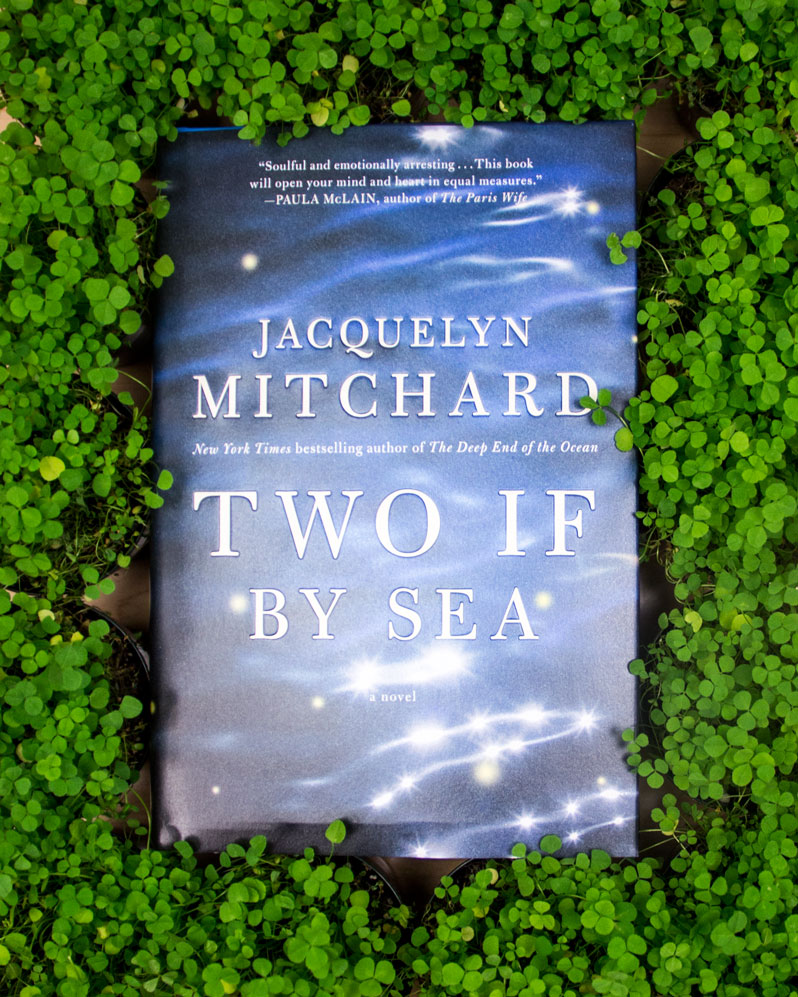 When a tsunami ravages the shores of Brisbane, Australia, killing American expat Frank Mercy’s pregnant wife, he somehow manages to forge on, joining a volunteer search and rescue team. He finds a little boy in a submerged car and rescues him in the nick of time. Instead of leaving him with the Red Cross, Frank sidesteps the law and brings the boy with him back to the States, where the two try to start over together on Frank’s childhood farm in Wisconsin. As he starts training horses and falls in love with a new woman, a new beginning seems possible—but Ian has a troubling telepathic gift that invites evil into all of their lives. A spellbinding work of fiction from the author of The Deep End of the Ocean. (Simon & Schuster)

I’m Glad About You by Theresa Rebeck 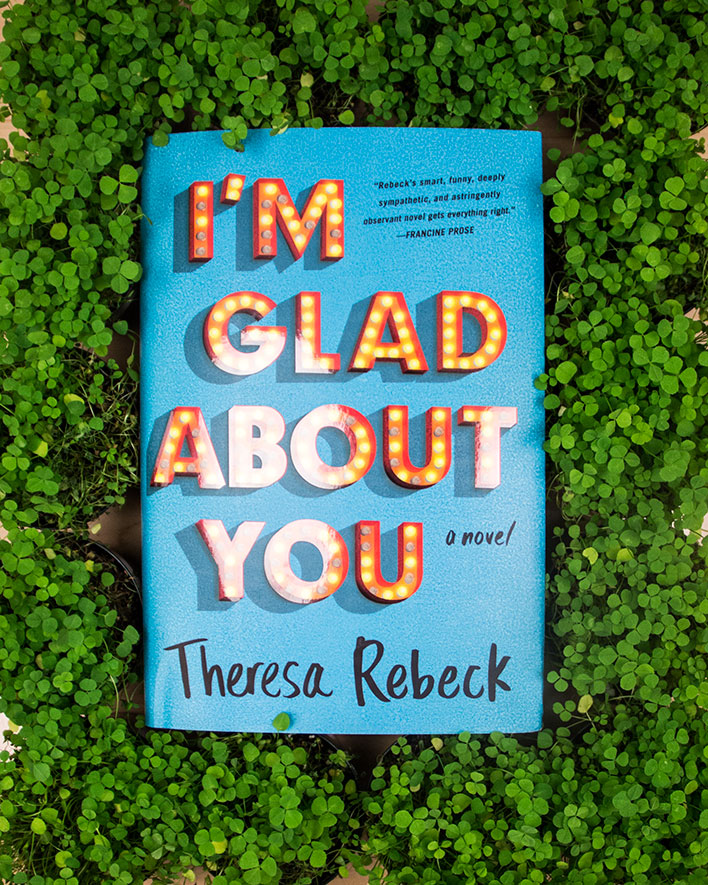 When Alison and Kyle meet in a parking lot during a high school football game in Cincinnati, they become involved in only the way teenagers can: an all-consuming and passionate love affair. But as graduation looms, it’s clear these two can’t stay together: ambitious Alison is just cooling her heels until she can leave town to become an actress and Kyle’s do-gooder heart is leading him towards practicing medicine in South American clinics. But Alison struggles in New York to get parts—or even an agent—and Kyle becomes a pediatrician (in the privileged suburbs he grew up in), married to a frigid woman whom he can barely stand. As Kyle and Alison’s paths cross again, and they wonder if their separation after high school was even worth it, Reback asks the question: “What happens when we meet the loves of our lives too young?” (Putnam)