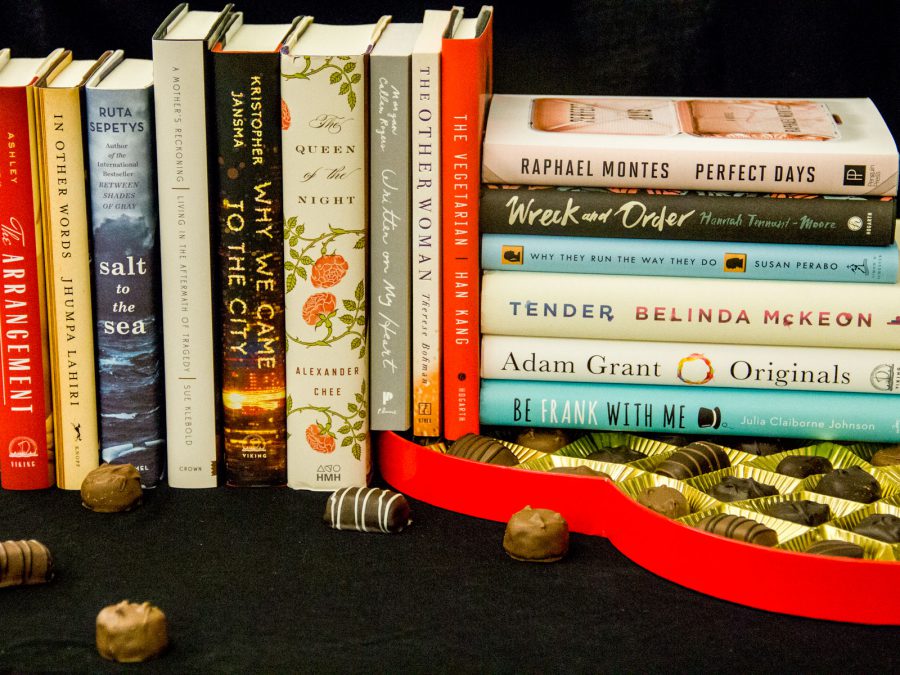 Happy Valentine’s Day RIFers! If there’s one thing we all have in common, it’s a love of books. And this February, the publishing industry is giving us some love in the form of the amazing books publishing this month. From pulse-quickening thrillers to stories of loves gained and loves lost, to the real life story of a mother’s heart cleaved in two by tragedy, the fifteen books we’re raving about this month are nothing short of extraordinary.

Click on the images to shop our picks, then let us know in the comments what you’ve been reading!

Why We Came To The City by Kristopher Jansma 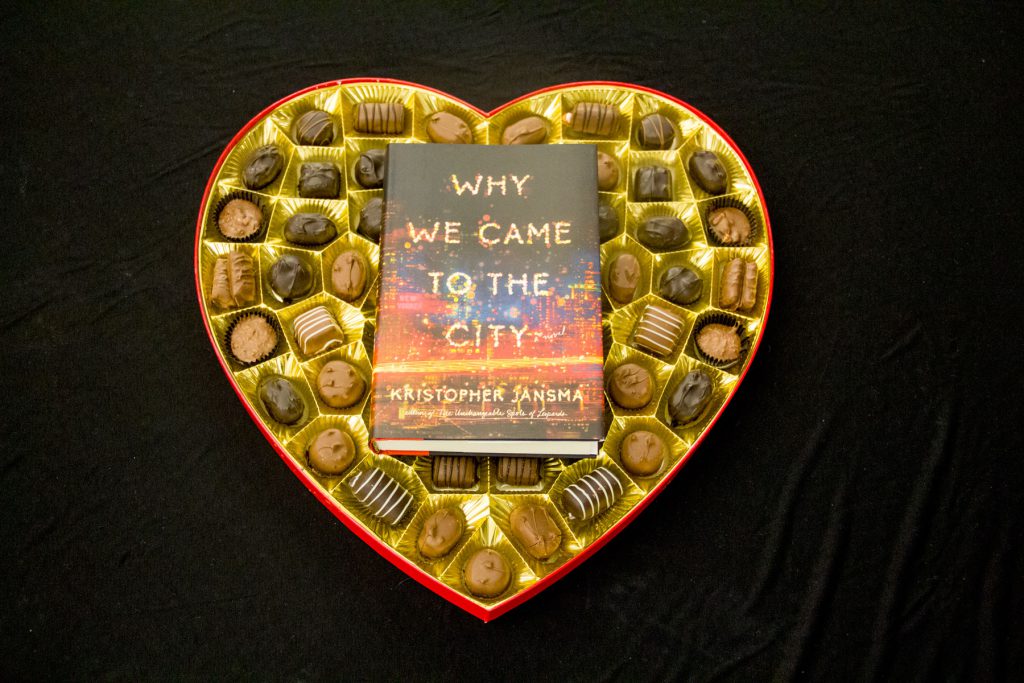 Fans of Hanya Yanigahara’s A Little Life and Meg Wolitzer’s The Interestings will love Kristopher Jansma’s tour de force, which follows five college friends all living unhurried post-graduate lives in New York City in 2008, right as the country is on the brink of economic collapse. While contending with fledgling careers and looming adult responsibilities, these friends—social butterfly Sara, her hard-drinking astronomer boyfriend George, sharp-tongued and quick witted Jacob, the artist with a troubled past Irene and tender-hearted finance guy William Cho—are rocked by something much bigger that will linger with all of them, keeping them connected once they slowly drift apart. A heartfelt meditation on friendship and growing up from the author of The Unchangeable Spots of Leopards. (Viking)

In Other Words by Jhumpa Lahiri 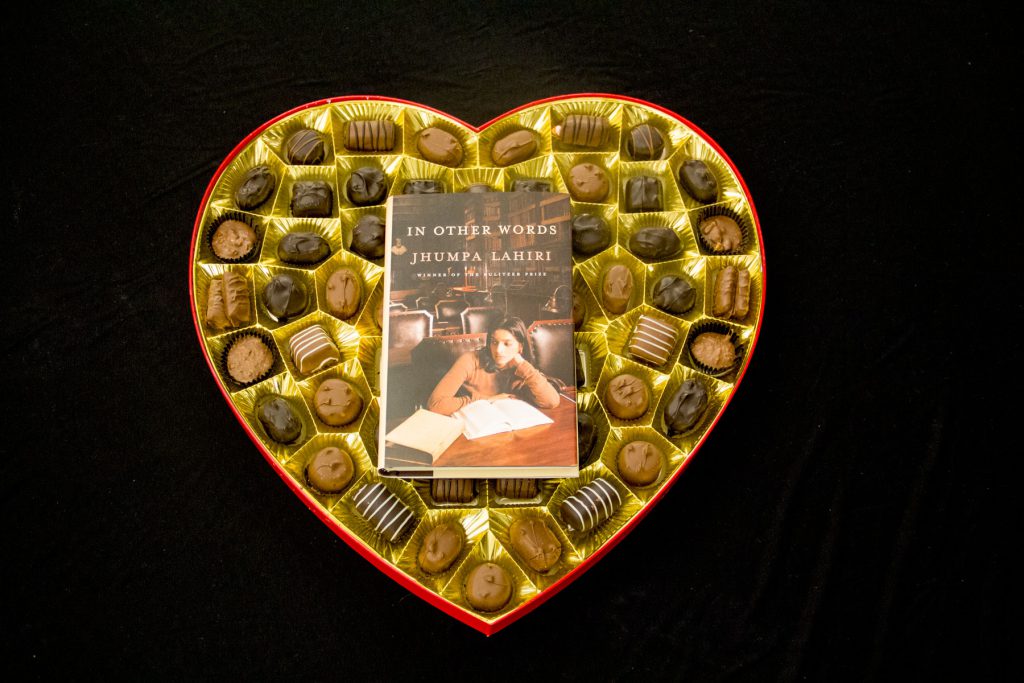 In this memoir by the Pulitzer-Prize-winning author, Jhumpa Lahiri writes a love letter to language—specifically Italian. After a trip to Florence post-college, Lahiri was drawn to the musicality of the Italian tongue, but despite studying it, never felt like she ever reached true fluency. So, she decides to relocate her husband and children to Rome, and begins her full immersion in the language—including the written word, not letting herself write in her journals in English. She crafted this book in Italian and it becomes a story of a writer’s self-reflection and the steps she takes to find her voice once again in a new place and tongue. (Knopf)

Why They Run The Way They Do by Susan Perabo 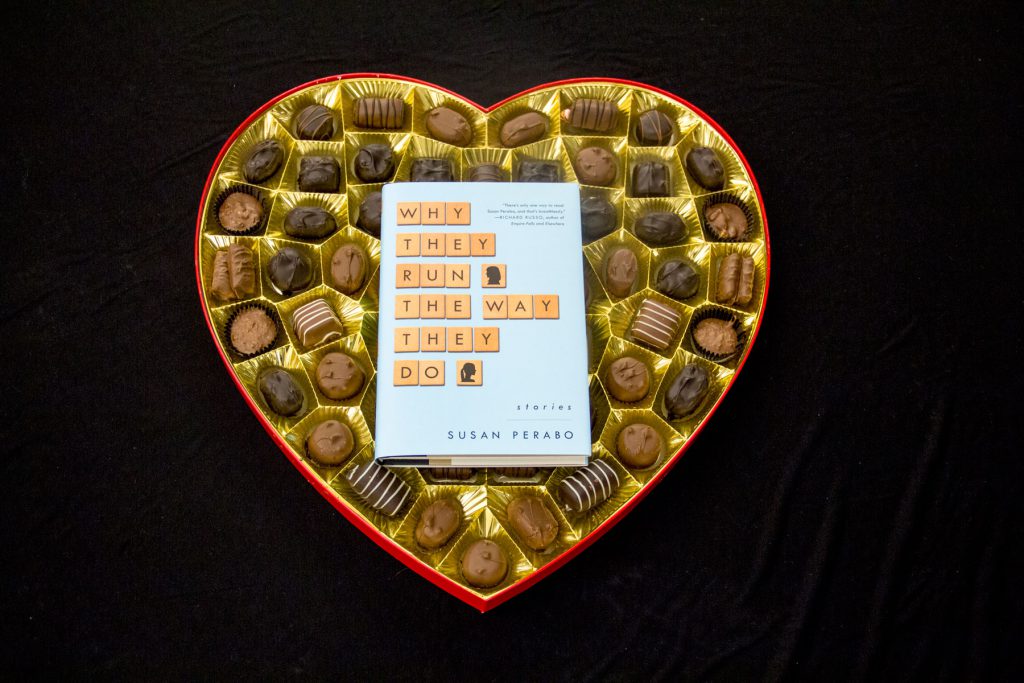 The twelve short stories that make up this collection look at life in a satirical and honest way, and are often tinged with sadness or hilarity in alternating takes. A couple is haunted by a past indiscretion through a child’s stuffed toy; two young girls see their principal in a compromising position and decide to try their hand at blackmail; two sisters are linked by a discovery in a bathroom trashcan. Perabo’s writing is wry and witty and this collection is a joy to sit with and savor. (Simon and Schuster) 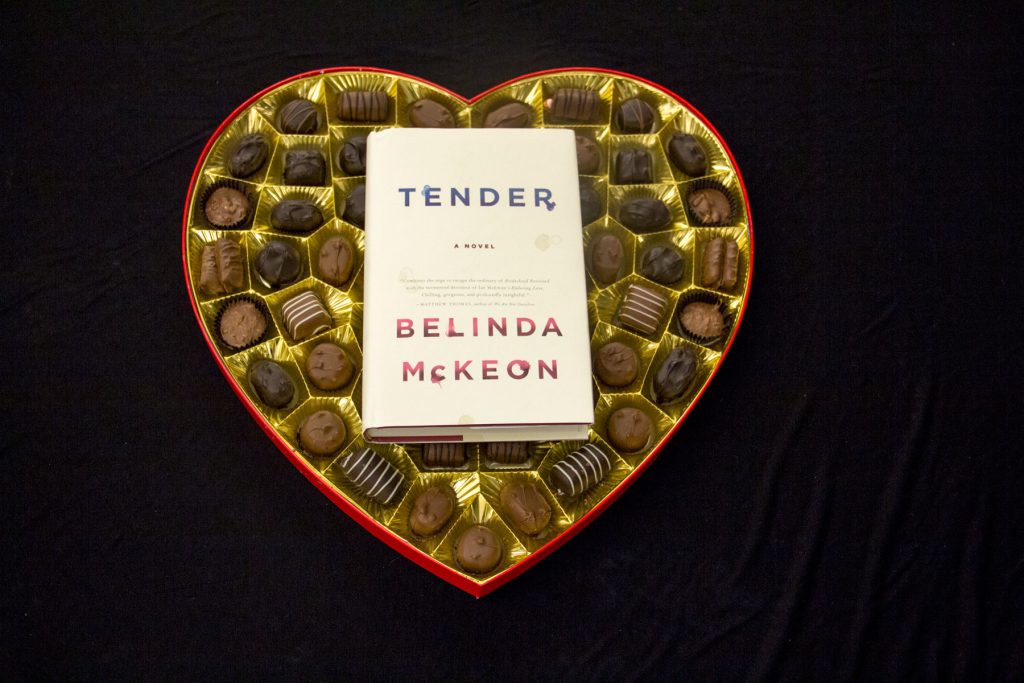 This Irish writer’s novel absolutely vibrates with human emotion. Tender is the story of Catherine, a young Irish lass attending university at Trinity College Dublin in the late 90s and James, a tall, lanky artist. A deep friendship forms between them, but the two are separated by a gulf of what they can reveal to one another and what they cannot. This is a moving exploration of sexuality, friendship and the thin line between longing and loneliness. (Lee Boudreaux Books)

Written on my Heart by Morgan Callan Rogers 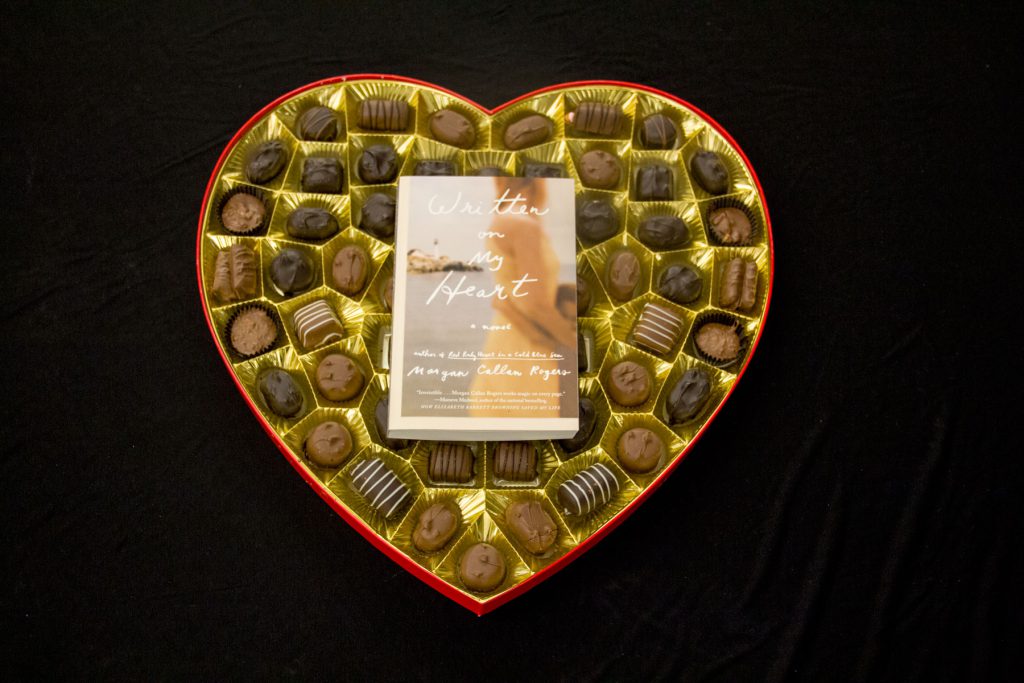 The second novel by Morgan Callan Rogers picks up in the same coastal Maine town alongside the same characters as in her first, Red Ruby Heart in a Cold Blue Sea. Young couple Florine and Bud have just tied the knot, but instead of leading a blissful newlywed life, Florine can’t stop thinking about her mother Carlie who vanished when Florine was 12. As clues begin to emerge about her mother’s disappearance, Bud and Florine try to solve the decades-old mystery while also raising a family. Gorgeously wrought, Morgan Callan Rogers has a true knack for voice and setting. (Plume)

Wreck and Order by Hannah Tennant-Moore 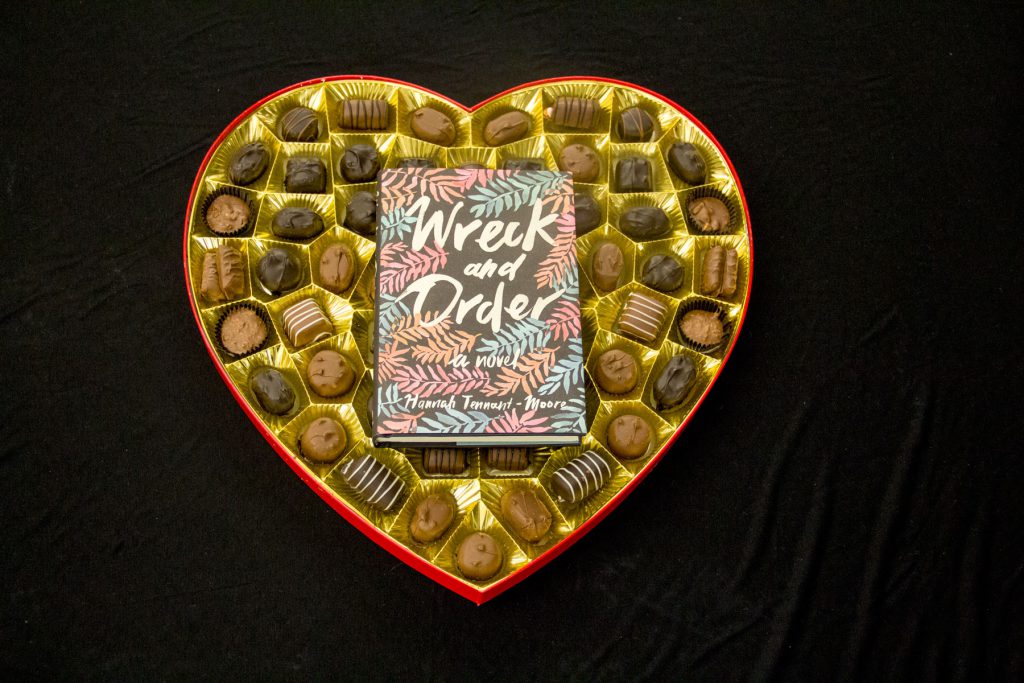 Twenty-something Elsie feels stuck. She makes self-destructive decisions, has a dead-end job at a newspaper and an on-and-off abusive boyfriend. Needing to break the cycle, she decides travel will provide her with the best education, so she sets off to see the world and find herself in places like Paris and Sri Lanka. The cast of characters she meets along the way keep her afloat as she wrestles with the important questions wrapped up in coming of age. This novel is stunning and is garnering some celeb attention: Sarah Jessica Parker recently ‘grammed that she was reading it in between takes on set. (Hogarth)

Salt to the Sea by Ruta Sepetys 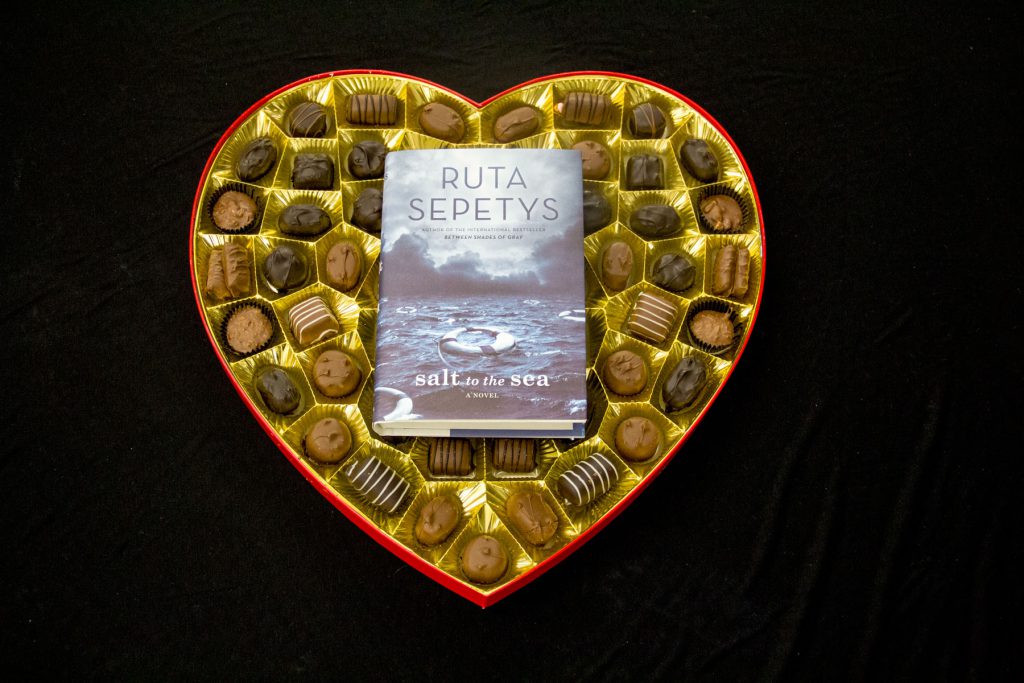 Have you finished All The Light We Cannot See and The Nightingale and need to get your historical fiction fix? International bestselling author Ruta Sepetys shines a light on a true-life tragedy uncovered by the history books. As World War II nears its end, thousands of refugees are seeking freedom. The ship Wilhelm Gustloff promises to be the answer and Joana, Emilia and Florian, all refugees with something to hide, meet as they head towards the shore and waiting ship. But when disaster strikes, the three—along with everyone else on board—must fight bitterly for survival. (Philomel)

The Other Woman by Therese Bohman 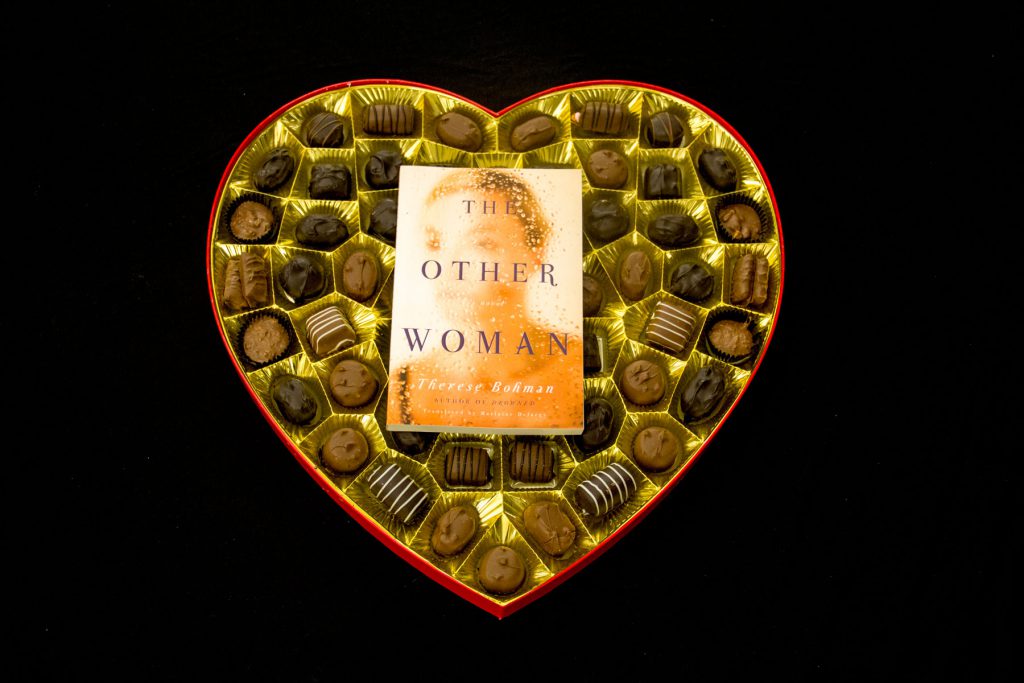 Translated from its original Swedish, The Other Woman gracefully examines questions of class, social status and femininity, when a young woman, who dreams of one day moving to the big city and becoming a writer, realizes she’s stuck in a menial job at a hospital cafeteria. To escape the drudgery, she begins to fantasize about how her life would change if she had an affair with a handsome married doctor. Fantasy soon turns to reality and after settling into her role as mistress, she meets an enigmatic young woman who causes her to re-evaluate everything she’s involved in. (Other Press)

The Queen of the Night by Alexander Chee 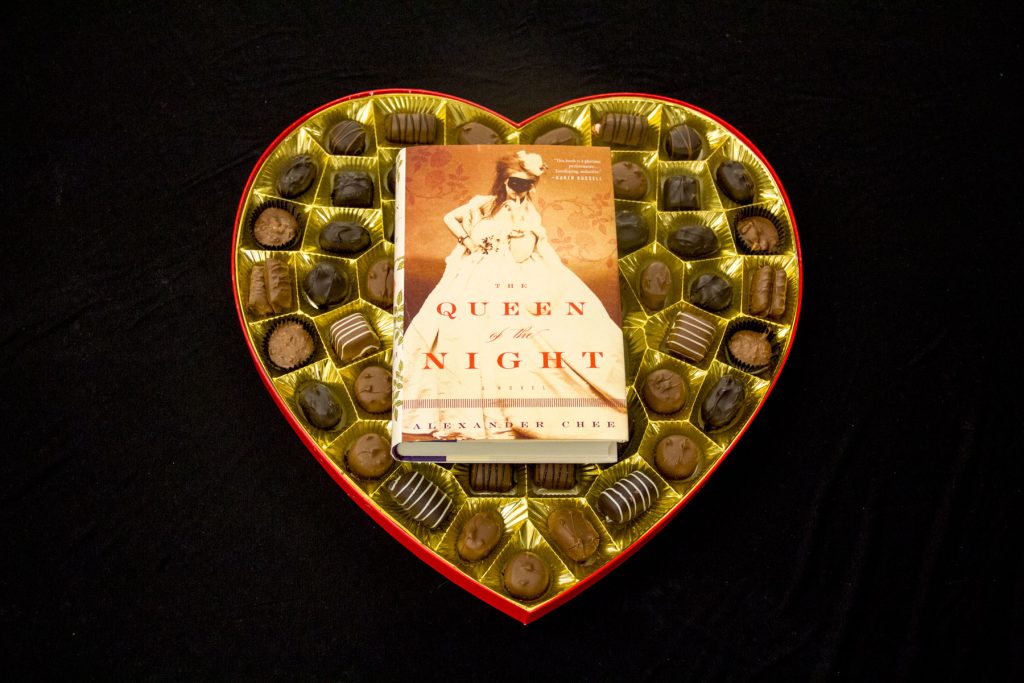 In his long-awaited second novel, Alexander Chee introduces readers to Lilliet Berne, a famous soprano in the Second Empire French opera. When she is offered a role in a new original opera, she jumps at the chance, until she realizes the show is based on her life, specifically a part of it she would very much like to keep hidden. Only four people could be responsible for authoring it and one of them is dead and two others are infatuated with her. As she searches for the person behind the opera, she must faces parts of her past she hopes would remain buried forever. (Houghton Mifflin Harcourt)

A Mother’s Reckoning: Living in the Aftermath of Tragedy by Sue Klebold 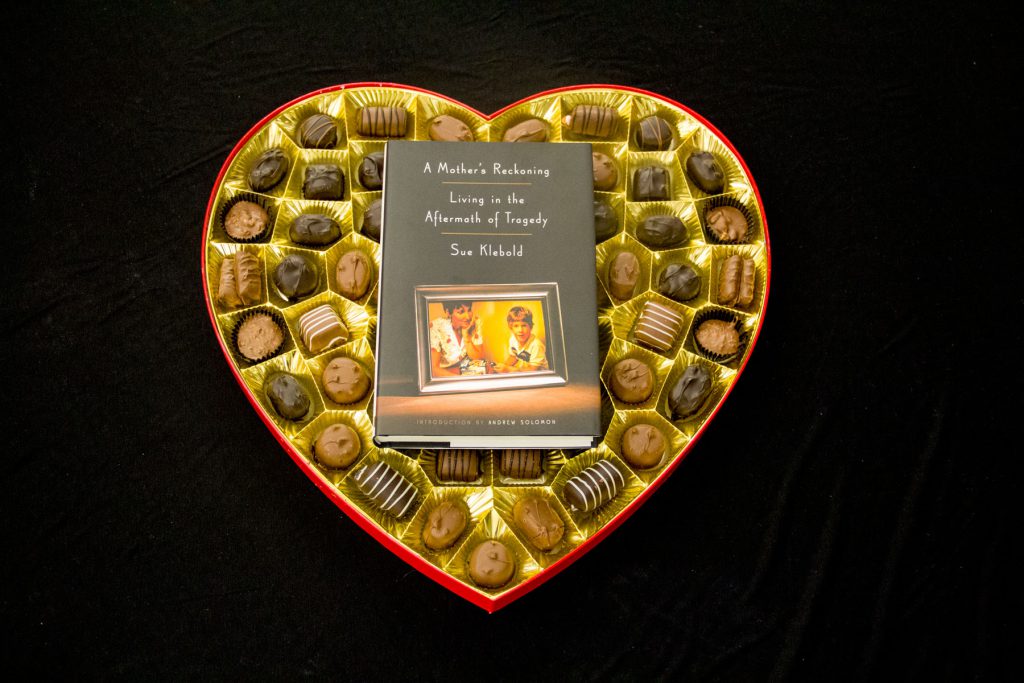 In late April of 1999, two senior students—Dylan Klebold and Eric Harris—entered Columbine High School and opened fire, killing twelve students and a teacher and wounding twenty-four others before taking their own lives. In the sixteen years since, Sue Klebold, Dylan’s mother, has had to live with the shame, guilt, grief, regret and unanswered questions surrounding her son’s actions. How could this have happened to such a promising young man and under her watch? In this brave memoir, Klebold tells with unflinching honesty and self-reflection her journey as a mother trying to grapple with the aftermath of that horrible day. A moving and heart-rending read you won’t soon forget. (Crown)

Be Frank With Me by Julia Clairborne Johnson 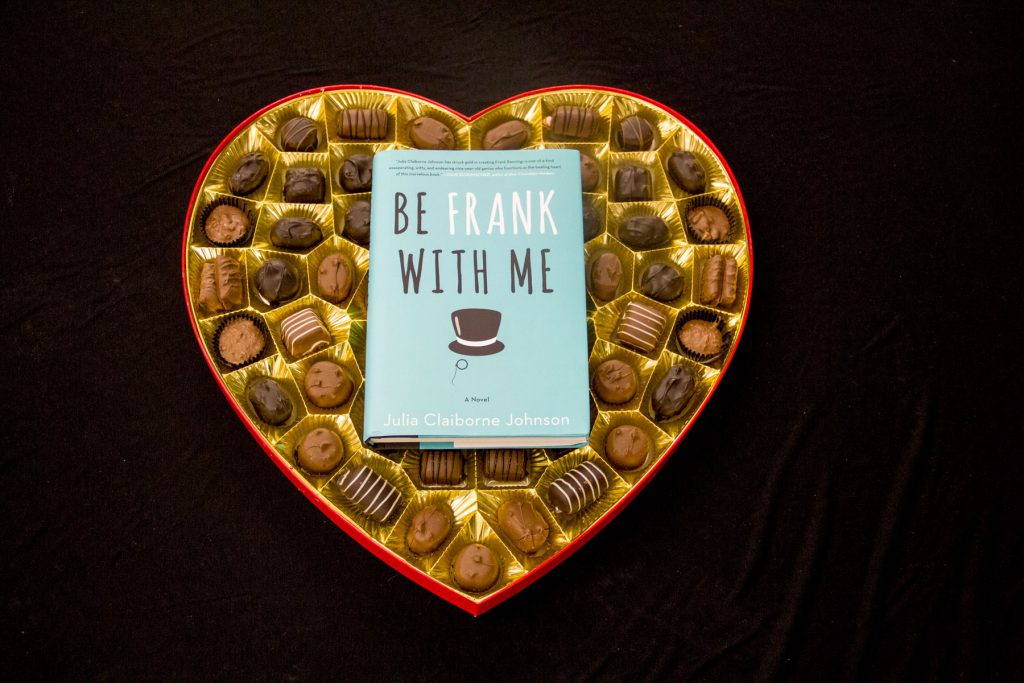 The debut novel is a book for book lovers. It’s been a quarter-century since Mimi Banning published her bestselling first novel. Since then, she’s squirreled herself away in her Bel Air mansion with her son Frank, an eccentric little boy whose view on life is totally unique. But when she loses her life savings to a Ponzi scheme, Mimi realizes she must write a second book and so, like the plot from the movie Get Him To The Greek, the publishing house sends an assistant to look after Mimi and assure the manuscript’s completion. But when Alice Whitley arrives, she’s put to work as Frank’s companion and the two must while away the days with only each other for company. This irreverent novel is a fun look at this unconventional writer-mother and her fascinating son and the woman caught in their web. (Harper Collins)

Originals: How Non-Conformists Move the World by Adam Grant 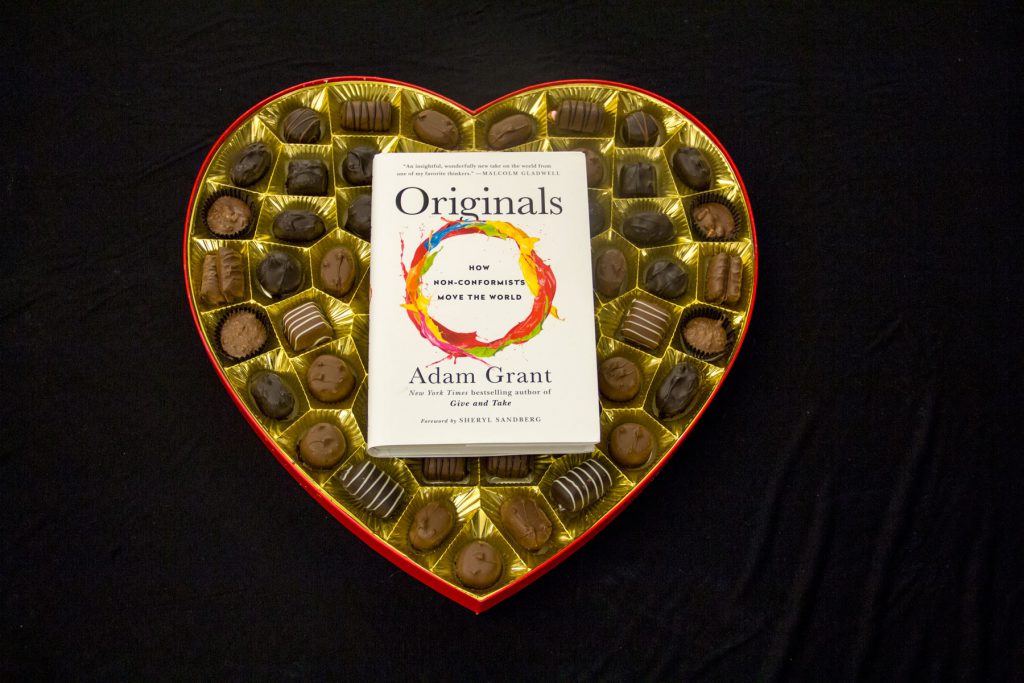 When we think of innovators, we often think they are risk-taking cowboys, who go against the grain until they win big with a wild idea. But Adam Grant, author of the bestseller Give and Take, debunks this myth. After studying the habits of many trailblazers in different fields (Warby Parker’s founding members, a TV exec who saved Seinfeld from cancellation and a woman at Apple who challenged Steve Jobs), he asserts that these trailblazers are made, not born and that by questioning the status quo and being a generous person, you can advance in business and in life. In short, nice guys don’t finish last. (Viking) 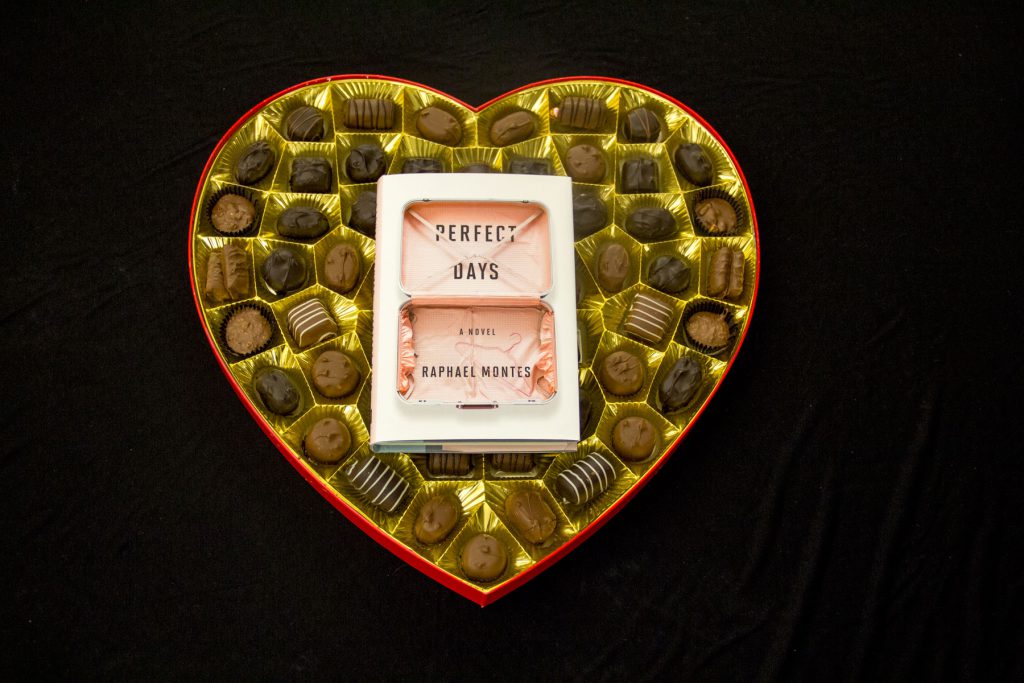 At only 25 years of age, Raphael Montes is already a hugely celebrated crime writer in his home country of Brazil. Perfect Days is his U.S. debut and this psychological thriller does not disappoint. Téo Avelar is a loner who lives with his paraplegic mother and her dog while he attends medical school in Rio de Janiero. By chance, he meets Clarice, an outspoken free spirit who is working on a screenplay about three friends on a road trip across Brazil. Téo instantly falls in love with her, stalking her, until one night he kidnaps her—only so she has the time to fall in love with him in return—and what happens next will give you shivers. (Penguin Press)

The Vegetarian by Han Kang 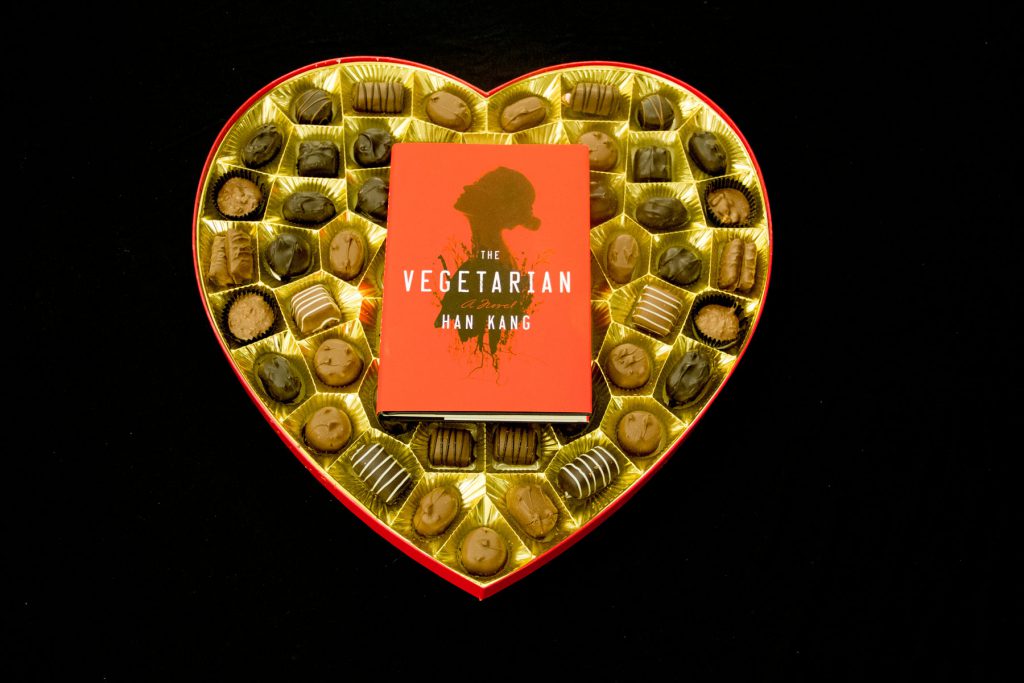 Yeong-hye and her husband live an ordinary life before the nightmares begin. But then graphic scenes of blood and viciousness pervade her subconscious, causing her to renounce eating meat in her waking life. This seemingly small act of independence sets her husband off and he, along with other members of her family, fight to re-establish control over Yeong-hye once again, resorting to violating her mind and body. This Kafka-esque novel is dark but introduces important topics such as freedom, choice, power and violent control. (Hogarth)

The Arrangement by Ashley Warlick 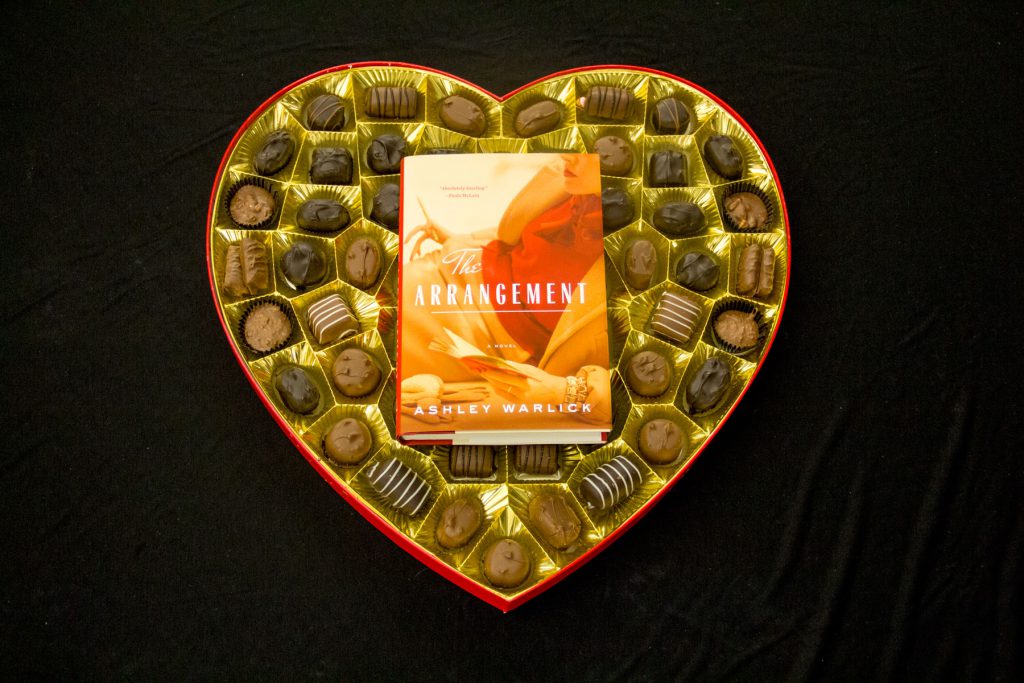 Author Ashley Warlick reimagines the life of famed food writer M.F.K. Fisher in this fictional look at her love affair with Tim Parrish. For Fisher, who celebrated the pleasures involved in a delicious meal, nothing worth savoring is off-limits for her, even for a woman in 1934 Los Angeles. This slow-burning affair begins, of course, with dinner and ends with an arrangement that puts Mary Frances, Tim and M.F.K.’s husband Al in a precarious love triangle. This sensuous novel dives deep into desire and passion and Mary Frances is a courageous heroine way ahead of her time. (Viking)