Earth
is a
Planet

When people ask me what it feels like the first time you spacewalk, what I tell them is this: Imagine you’ve been tapped to be the starting pitcher in game seven of the World Series. Fifty thousand screaming fans in the seats, millions of people watching around the world, and you’re in the bullpen waiting to go out. But you’ve never actually played baseball before. You’ve never set foot on a baseball diamond before. You’ve spent time in the batting cages. You’ve run drills and exercises with mock-ups and replicas. You’ve spent months playing MLB on your Sony PlayStation, but you’ve never once set foot on that mound. And guess what? The Series is tied and the whole season is on the line and everyone is banking everything on you. Now go get ’em. That’s how I felt sitting in that airlock.

I watched the clock tick down, anxiously waiting for it to get to zero. Finally it did. Once the pre-breathe was over, we unhooked our suits and we were floating. Then Grunsfeld floated over to the air- lock’s inner hatch and pushed it closed. He pulled the handle down and spun it shut. It sounded like I was being locked in a prison cell. WHOMP! CHA–CHUNK! I looked over at Newman like I guess this is it. There’s no going back now.

Newman switched our suits over to their own battery power and oxygen. Then he started to depress the airlock. After a final purge of air from the airlock, we were in a complete vacuum. There was no sound.

At that point we were clear to go. Newman pulled open the door to the payload bay and pushed the thermal cover aside. Then he went out first to make sure the coast was clear and to secure our safety tethers. He was out there for a few minutes. Finally he said, “Okay, you’re clear to come out.”  I put my hands on the hatch frame and pulled myself through. I was floating on my back, looking up and out of the payload bay. The first thing I saw was Newman floating above me, hanging out with this grin on his face like Check this out.

Behind his head was Africa.

According to my suit’s biometric sensors, I have a normal resting heart rate of 50 or 60 beats per minute. The moment I saw the Earth it spiked to 120. Eventually it settled back down to a normal exercise rate of around 75, but for that moment it was racing. Hubble is 350 miles above Earth; we need the telescope as far away from the planet as possible in order to have a longer orbit, see more of the sky, and be farther away from the atmospheric effects of Earth. The space station is 250 miles above Earth. From that vantage you can’t fit the whole planet in your field of vision. From Hubble you can see the whole thing. You can see the curvature of the Earth. You can see this gigantic, bright blue marble set against the blackness of space, and it’s the most magnificent and incredible thing you’ve ever seen in your life.

Seeing the Earth framed through the shuttle’s small windows versus seeing it from outside was like the difference between looking at fish in an aquarium versus scuba diving on the Great Barrier Reef. I wasn’t constrained by any frame. The glass of my helmet was polished crystal clear, and every direction I looked, there was nothing around me but the infinity of the universe. I was really out there, floating in it, swimming in it. I felt like a real spaceman.

After seeing the Earth, I looked down the payload bay at the telescope, and the thing I noticed was the light from the sun. The sun on Earth is filtered through the atmosphere; it can appear bright yellow or as that golden hue you get at sunset. In space, sunlight is nothing like sunlight as you know it. It’s pure whiteness. It’s perfect white light. It’s the whitest white you’ve ever seen. I felt like I had Superman vision. The colors were intense and vibrant—the gleaming white body of the shuttle; the metallic gold of the Mylar sheets and the thermal blankets; the red, white, and blue of the American flag on my shoulder. Everything was bright and rich and beautiful. Everything had a clarity and a crispness to it. It was like I was seeing things in their purest form, like I was seeing true color for the first time.

After taking a minute to soak everything in, my first conscious thought was How the heck am I going to get anything done? How am I supposed to pay attention to my work with this magnificent beauty all around me? But then I turned my head back to the wall of the payload bay right in front of me and there was a handrail. I recognized it. It was just like the handrail I’d seen and worked with in the pool dozens of times. I looked around and everything in the payload bay was right where it was supposed to be. Every tool, every piece of equipment, the winch with the rope on the end of it—everything felt familiar. Even though I’d never been out on that pitcher’s mound before, I knew exactly what I needed to do.

It was time to go to work…

The spacewalk went smoothly. In fact, we were doing so well that we were moving ahead of schedule. At one point we ran into a question we needed Mission Control to answer, about whether or not they wanted us to test a latch on one of the telescope doors. As incredible as it sounds, I’d been out in space for nearly six hours and I’d taken only a few moments to glance at the Earth; I’d been doing my best to ignore it in order to concentrate. Now, while Newman and I waited for an answer, I paused and took a closer look.

It was a night pass. We were over the Pacific, and everything was totally black but for the city lights on Hawaii and a few other islands below. As we came up on California I felt a slight warmth and I knew the next day pass was coming. I looked across the country to see Atlanta all bright and lit up with everyone getting coffee and going to work, but right below me Phoenix and Los Angeles and San Diego were still in complete darkness. I could imagine the tourists at the Grand Canyon, patiently waiting for sunrise to get their perfect golden shot.

The way we experience sunrise on Earth is so gradual. The black outside your window slowly turns to gray. You see a few glimmers of light reflecting off the buildings across the street. In space there is literally a line that bisects the Earth. On one side of it there is darkness. On the other side there is light. The line sweeps west, swiftly and steadily, coming across Europe, across the Atlantic, across Florida, across Texas. I watched this line coming toward me. Then I looked past it up toward the sun. Then I looked back at the line again and realized: The line isn’t moving. The sun isn’t moving. We are.

At that moment I realized that, for my entire life, my perception of reality had been wrong. Every morning you wake up and sit and have your cup of coffee and you watch the sun rise. You don’t have any sensation of the Earth moving beneath you. You think you’re sitting still as the sun rises in the east and crosses above and sets in the west. But the sun isn’t moving. Yes, the sun and the solar system are flying through the galaxy at 45,000 miles per hour. But relative to you and me and the Earth, the sun isn’t going anywhere.

And you know that. Anyone who’s taken third-grade science knows that the Earth rotates and revolves around the sun. You understand it intellectually, but you don’t feel it until you’ve seen it from in space.

My whole life I’d thought of Earth as this place where we’re in control of our lives. I’d wake up, go to the grocery store, take my kid to a baseball game. It was this safe, stable cocoon. Now it wasn’t that anymore. In space I could see the Earth in relation to the stars and the sun and the moon. The Earth is a planet. It’s a spaceship. We’re zipping around the universe, hurtling through the chaos of space with asteroids and black holes and everything else, and we think we’re safe but, boy, we are right out there in the middle of it.

Once Newman and I finished up and ingressed back into the airlock, I was not the same person I was when I went out. Newman did the depress, the pressure equalized, the inner hatch opened, and before I could get my helmet off, Digger was right there, like he said he’d be, waiting for me to tell him about it. He wouldn’t even let me get out of my suit. He was right there in my mug. “What’s it like? What’s it like?”

“The Earth is a planet.”

“It’s a planet,” I said. “It’s not what we thought it was back home. It’s not this safe cocoon, man. We’re out here spinning in all this chaos. The Earth is a planet. The Earth is a spaceship, and we’re all space travelers.”

That’s the truth, and that’s still how I think of the Earth today.

I walk out my front door in Manhattan in the morning. Everyone else around me sees the street in front of them and the buildings around them and none of that stuff is moving, but they look up and see the sun flying from east to west overhead. I walk down that same street and I know that sun is staying right where it is and it’s me and these buildings and this street and this planet that are spinning round and round and hurtling through the void. And the fact that that happens every day, the fact that we exist, is an astonishing thing.

Reprinted from Spaceman: An Astronaut’s Unlikely Journey to Unlock the Secrets of the Universe © 2016 by Mike Massimino. Published by Crown Archetype, an imprint of Penguin Random House LLC. 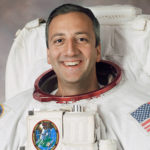 Mike Massimino served as a NASA Astronaut from 1996 until 2014 and flew in space twice: STS-109 on space shuttle Columbia in March 2002 and STS-125 on space shuttle Atlantis in May 2009 – the final two Hubble Space Telescope servicing missions. Mike became the first human to tweet from space, was the last human to work inside of Hubble, and set a team record with his crewmates for the most cumulative spacewalking time in a single space shuttle mission. Mike has a recurring role as himself on The Big Bang Theory; appears regularly on late night talk shows, news programs, and documentaries; and is a much sought after inspirational speaker. He received his BS from the Columbia University School of Engineering, and his two MS’s and Ph.D. from the Massachusetts Institute of Technology (MIT). He currently lives in New York City where he is an engineering professor at Columbia and an advisor at the Intrepid Sea, Air, and Space Museum.