Ink on Books: A Few of Our Favorite Literary Tattoos

Books tattoo themselves on our hearts—but these special tributes are inked into the skin, lasting reminders of their hold on us.

By Lauren Oster • 5 years ago

I’ve always had a soft spot for Pete Townshend’s “Tattoo,” a sweet, goofy song about self-definition from The Who Sell Out (1967). The chorus is especially fun:

Welcome to my life, tattoo!

We’ve a long time together, me and you.

I expect I’ll regret you, but the skin graft man won’t get you;

You’ll be there when I die.

I also have a soft spot (probably the back of my neck, where I expect to get something David-Foster-Wallace-related someday) for literary tattoos; nothing says “that story stuck with me” quite like sticking yourself with a story. Meet 10 folks who have done just that—and tell us in the comments what your ideal ink about ink would be!

Lena Dunham declared her love for Kay Thompson’s Eloise (as drawn by illustrator Hilary Knight, who asked Dunham to dinner after learning about her ink) on her lower back. “Eloise is such an important force in my life and I can relate to her in so many ways,” she told Vanity Fair at the premiere of a documentary on Knight. “The minute I discovered the Internet, I would go on and print pictures of Eloise and buy any Eloise product and any new Eloise book. Getting an Eloise tattoo just seemed like the thing that I would never grow sick of and I haven’t.” 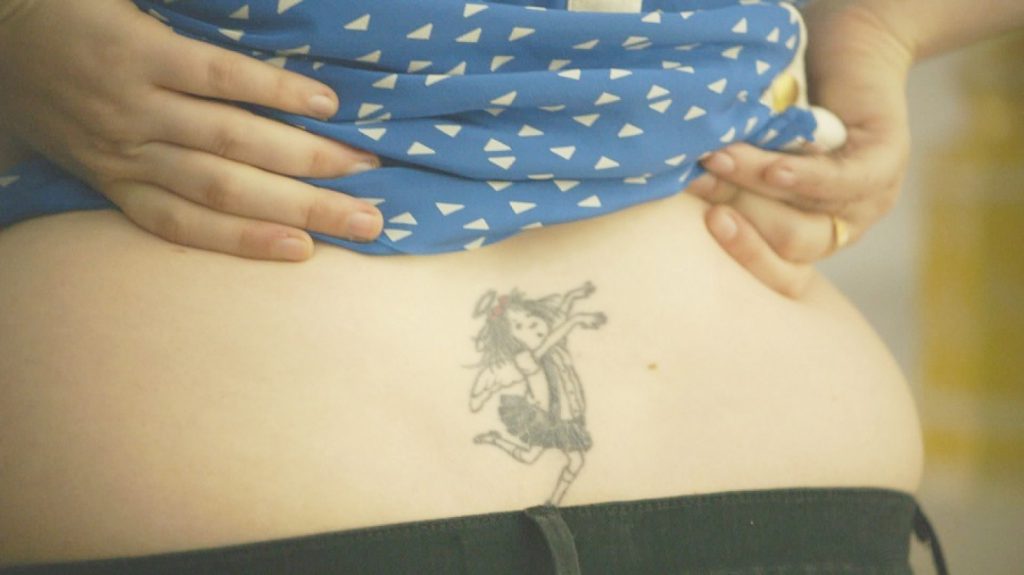 2: The Giving Tree (on Ryan Gosling)

At the other end of the spectrum, Ryan Gosling seems to have acquired a permanent version of Shel Silverstein’s The Giving Tree on his bicep because it’ll always make him…angry. “That book is so fucked up; that story’s the worst,” he told New York. “I mean, at the end the tree is a stump and the old guy just sitting on him, he’s just used him to death, and you’re supposed to want to be the tree? Fuck you. You be the tree. I don’t want to be the tree.” That’s consistent with his feelings about ink, at least: “A tattoo should never be meaningful,” he explained in 2007, “because at a certain point you’re going to hate it, and it might as well make you laugh.” Even so, I feel that Dr. Seuss’s Lorax (who’s spoken for the trees since his debut in 1971) could balance things out nicely on Ryan’s right arm. Speaking of The Lorax… 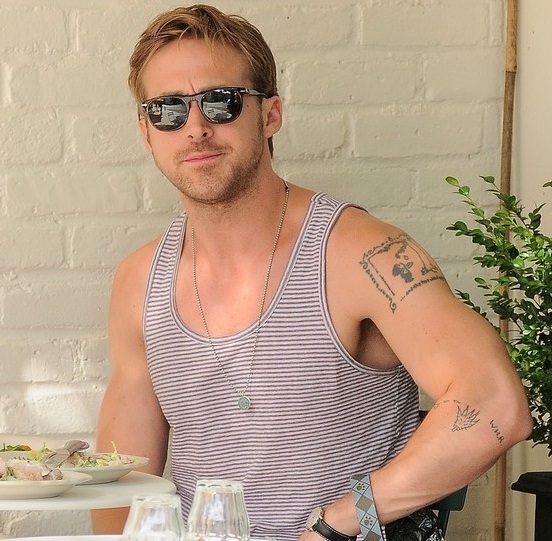 ….the hashtag #loraxtattoo has been used 85 times on Instagram to date, and I’m hoping for at least 85 additional instances. I think this especially vibrant fellow, inked by Cecil Porter in Portland, OR, is more than a match for Gosling’s ironic stump. “Unless someone like you cares a whole awful lot,” the earnest orange environmentalist reminds us, “nothing is going to get better. It’s not.” 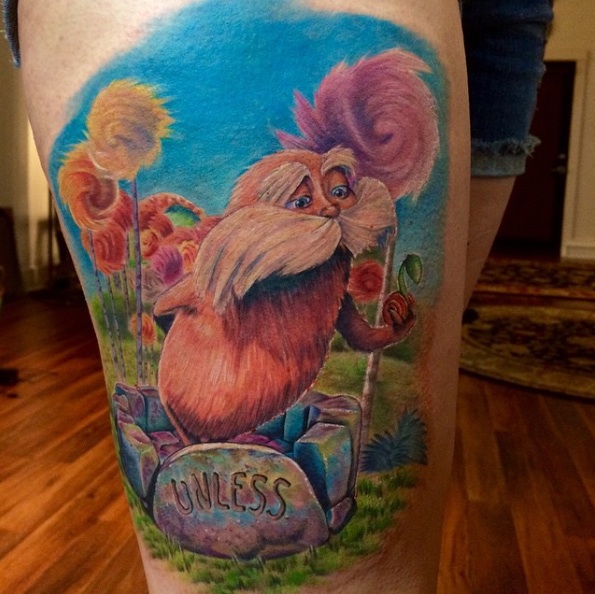 In “Crazy Friend (Philip K. Dick),” an essay in his nonfiction collection The Ecstasy of Influence, Jonathan Lethem (below, with radio producer Benjamen Walker and his matching ink) explains how his love of the sci-fi master drove him to get the spray-can logo from the first American edition of the 1969 novel Ubik tattooed on his left arm:

“I [selected] a gooey fictional substance that gives title to the book in which it appears—I dare you to think of another example. I never wear sleeveless shirts, but word of my tattoo has circulated, slightly, a viral rider on my own moderate fame, and I’m occasionally called on by sly interlocutors to sheepishly exhibit it while signing at a bookstore. In two decades I’ve watched my spray can swell, shrink and grow slack with the changing contours of my arm, gain hairs, survive mosquito bites. The simple colors haven’t faded badly, but the blue outline has blurred, victim of the entropy the spray-product Ubik was supposed to combat. Dick ensured Ubik’s immortality; I’ve ensured its mortality.” 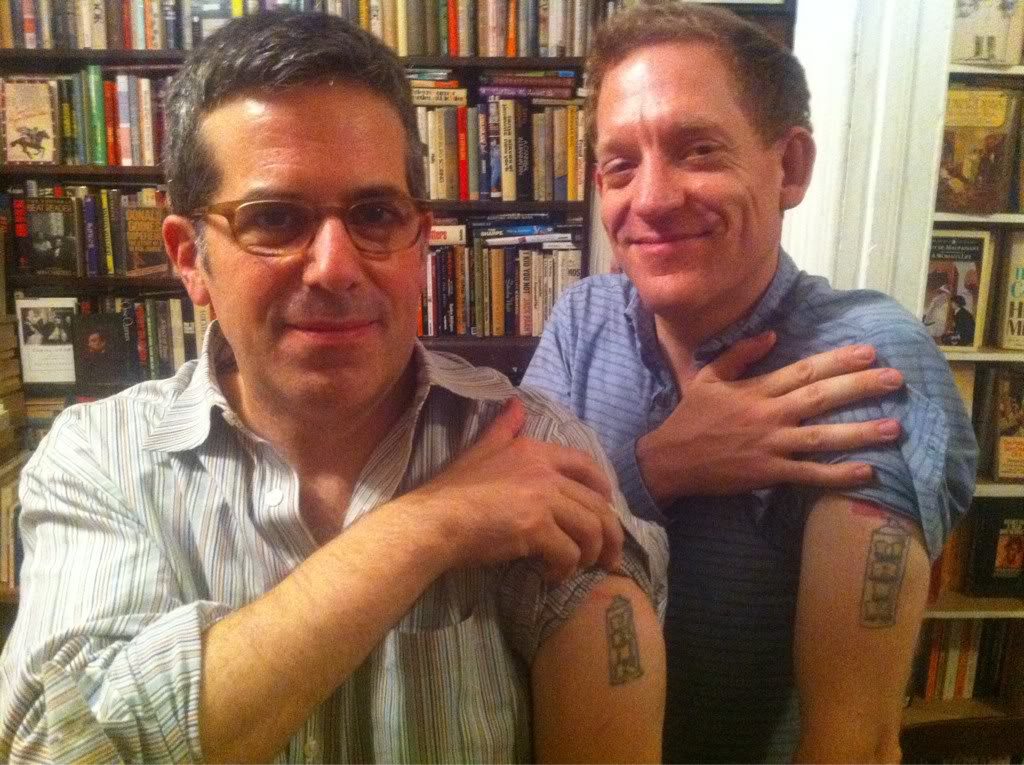 I like to imagine the Shakespearean version of this, in which someone gets Sonnet 18 (“But thy eternal summer shall not fade”) tattooed in a place that gradually sags and/or spends decades in the sun. (That person will not be me; I’m saving myself for the Nancy Drew tattoo coming up.)

This playing card by Montreal tattoo artist Angus Philip Byers might not scream “Robert Louis Stevenson” to a casual onlooker—but once you recognize Dr. Jekyll and Mr. Hyde, they’re impossible to miss (and a devilish dual portrait). Henry Jekyll came to the same conclusion in his ill-advised experiments, of course, and in a letter to the novella’s main character:

“It was on the moral side, and in my own person, that I learned to recognise the thorough and primitive duality of man; I saw that, of the two natures that contended in the field of my consciousness, even if I could rightly be said to be neither, it was only because I was radically both; and from an early date…I had learned to dwell with pleasure, as a beloved daydream, on the thought of the separation of these elements.” 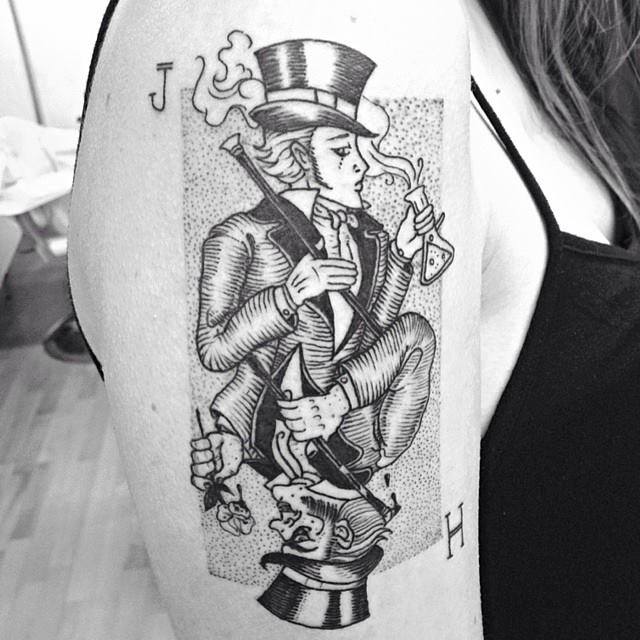 There’s no mistaking the cornucopia of Kurt Vonnegut references on this magnificent sleeve by Tim Harris at Hope Gallery in New Haven, CT, which features everything from a portrait of the man himself to Valencia and Billy Pilgrim’s would-be epitaph from Slaughterhouse-Five (“Everything was beautiful, and nothing hurt.”) Vonnegut, incidentally, once remarked to a reporter, “My epitaph should be—and I am honorary president of the American Humanist Association—‘The only proof he needed of the existence of god was music.’ That’d make a lovely tattoo as well, wouldn’t it? 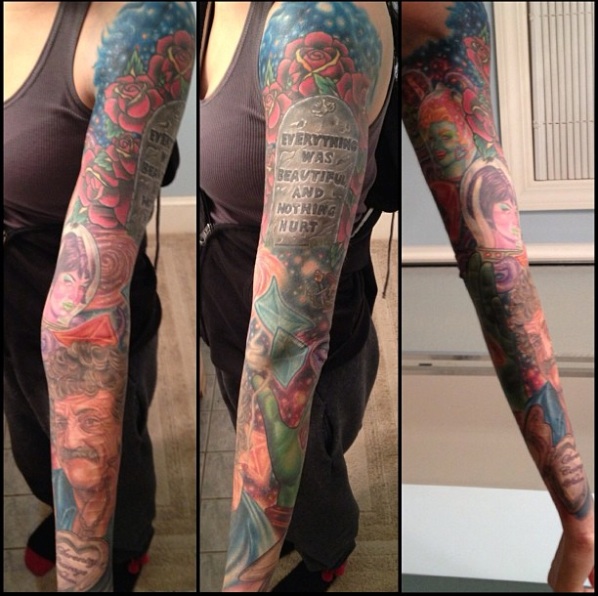 I can still picture the glorious gold band formed by the shelf of Nancy Drew mysteries at my elementary school’s library; with a flashlight and a magnifying glass, Carolyn Keene’s whip-smart “best girl detective in the whole world!” (per her boring-but-trusty boyfriend, Ned) led me right out of childhood ennui. What better tribute to literary ladies who get things done than a classic portrait of the titian-haired teenage sleuth herself (by Barry Jaeger at Wisconsin’s Waukesha Tattoo Company)? If I may quote Nancy’s Mysterious Letter (1932), “Do act mysterious. It always keeps them coming back for more.” 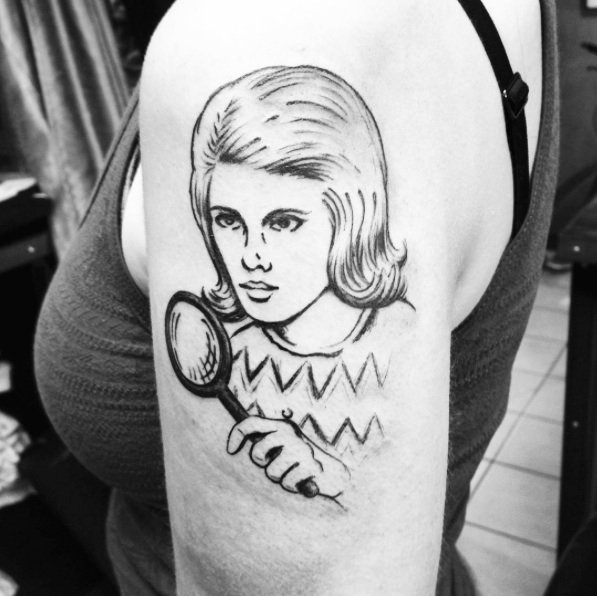 One could argue that a coal-black bird tattoo would evoke Poe’s feathered fiend more readily than said bird’s croak in script (on shins! Poetry on shins!), but one would be wrong; this dolorous pair (by Angus Philip Byers) is as melancholy as Baltimore’s favorite depressive himself. Poe’s poetry finds way onto celebrity skin as well: the actress Evan Rachel Wood carries “All that we see or seem / is but a dream within a dream” (from “A Dream Within a Dream”) on her back. (If poem tattoos on poets are your thing, incidentally, check out The Tattooed Poet Project). 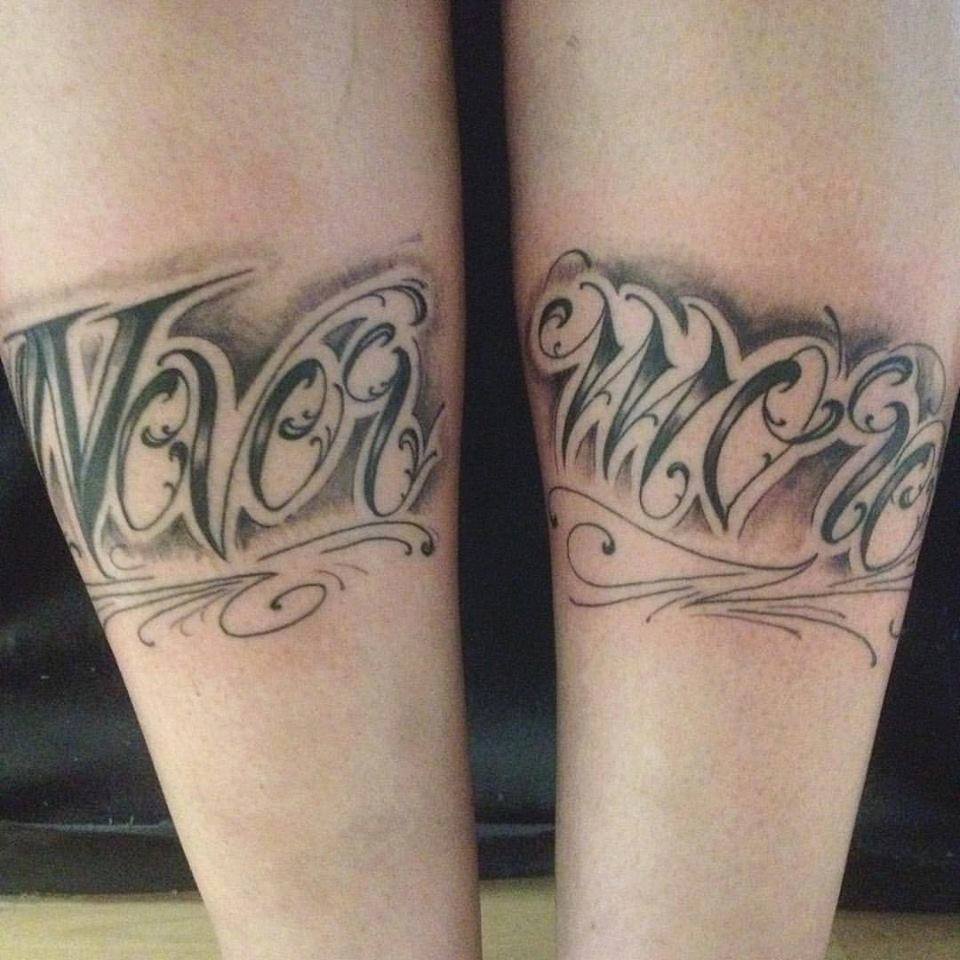 A far more benevolent bird proclaims its bearer’s Harry Potter fandom on this traditional chest piece, by Sean Lanusse (in Portland, OR). From where I’m sitting, Harry and his Hogwarts classmates’ mail-bearing owls are one of the best details of J.K. Rowling’s wizarding world. (Sorry, U.S. Postal Service. They’re much cuter.) RIP, Hedwig. 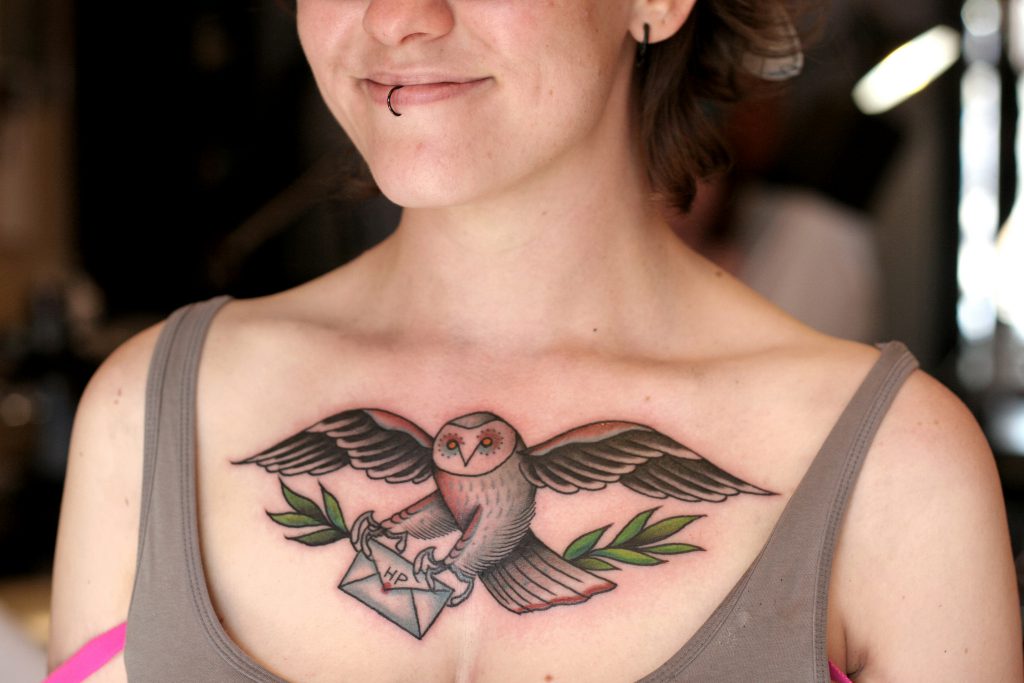 Last but emphatically not least, let’s raise a pewter mug of grog to Iron Will Tattoo Club’s aptly-named Sam Sea; show me a sailor who could resist this depiction of Ahab’s leviathan nemesis and I’ll show you a sailor missing at least one eye. First published 164 years and a couple of days ago, Moby-Dick and its title character are still a classic and a badass, respectively. 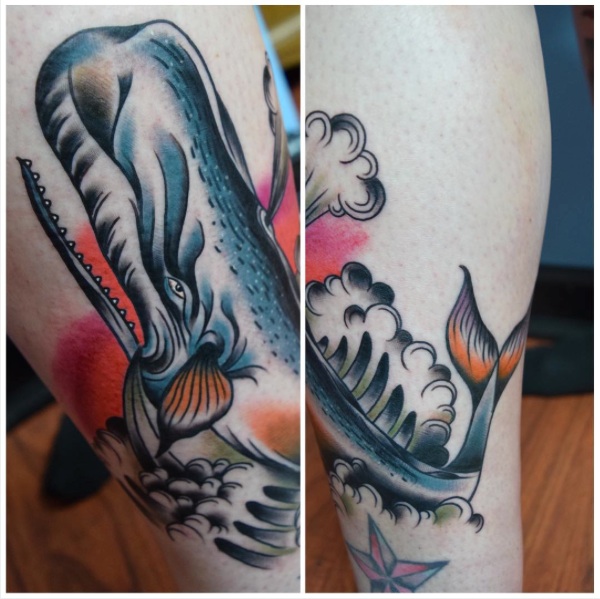 Image credits: nhoc_fullmoon/Twenty20.com, Photo of tattoo quoting a famous passage from J.R. Tolkien’s book The Lord of the Rings: “All that is gold does not glitter/Not all those who wander are lost/The old that is strong does not wither/Deep roots are not reached by the frost.” by Joel Carillet/iStockPhoto.com.