In this excerpt from her delightful memoir, Every Frenchman Has One, the legendary Gone with the Wind actress learns a new tongue.

By Olivia de Havilland • 5 years ago 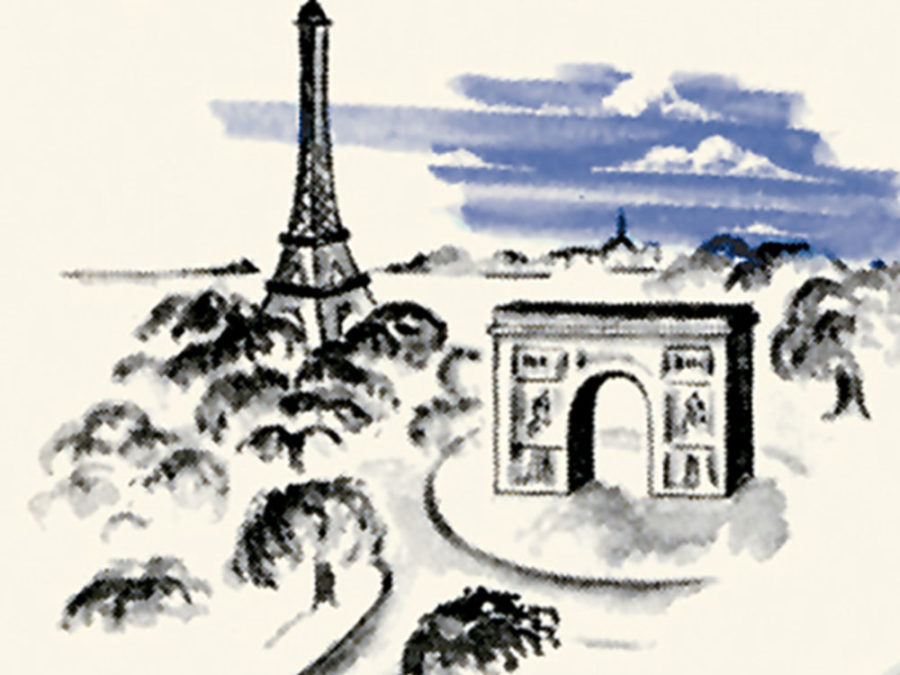 All the French speak French

Of course the thing that staggers you when you first come to France is the fact that all the French speak French—even the children. Many Americans and Britishers who visit the country never quite adjust to this, and the idea persists that the natives speak the language just to show off or be difficult. More than once Americans have arrived at my Paris house flushed and tardy, exclaiming that they were late because they had had the misfortune to get “one of those taxi drivers who would speak French!”

I must say that by the time I reached the Cannes Film Festival on my first trip to France, I was pretty well shaken myself. However, I rallied and decided to apply myself to learning the language. When I left the country two weeks later I was able to pronounce Keerque Dooglahce and Clarque Gobbluh with the best of them.

Then on my return in October I got down to business and started taking lessons three times a week with a professor, a textbook, and a notebook for my homework. I was encouraged by my professor to be brave and attempt not only words but phrases with taxicab drivers, news-vendors, anyone and everyone, and to cease depending on desperate gestures and strangled cries to make myself understood.

No point in practicing on Pierre—he was practicing on me, improving his English. So I started with the taxicab drivers. Fortunately for me they were always the kind who would speak French.

Of course, in the French cab, as in the Manhattan or Brooklyn cab, the driver always opens the conversation. And for the fare, in either case, the first principle is to understand what the driver has said. It really is more difficult in Paris. But one day after I’d started my lessons, a taxicab driver’s opening gambit swam murkily into my consciousness and instead of just swimming out of it right away, it hesitated, stayed, and then miraculously separated itself into intelligible words, which, I gathered, had to do with Paris being pretty in the winter. I was thrilled and inspired, and instead of playing safe with my usual international “hmmm,” suitable for all occasions, I assembled my first complete French sentence in less than 280 seconds and stated that I agreed, except for one thing: “Three days after it falls,” said I, “the snow in Paris becomes very salty.” That was one time a taxicab driver decided not to argue the point. And I still don’t see why salé should mean salty when sale means dirty.

Not long after that, intoxicated by a really brilliant showing at my lesson, I gave some quite detailed instructions to another taxicab driver as to where I wanted him to stop. This time I made a splendid bouillabaisse of la crêpe (pancake), le crêpe (widows’ weeds), arrêt (stop), arête (fishbone), and rather authoritatively asked him to put me down at the fishbone of the autobus where the lady was standing wearing the pancake. He did, too.

Then there was the day I shook my professor. I’d been on a household shopping excursion and had been rather dismayed by the high cost of things. Well, I don’t know if you see much difference between matelot and matelas, and I don’t know how you’d complain about the price of a mattress. But anyway I rushed in to my professor at lesson time in a state of outrage and indignantly proclaimed that I had discovered that French sailors were very expensive!

I do better these days, but every now and then something will happen which makes it clear there’s still room for improvement. A few months ago, for instance, I took my son, Benjamin, to see Robin Hood on the Champs Élysées. I made it years ago, when I was only sixteen to be inexact, and I was enchanted to find it running again in Paris after such a passage of time. Of course the film was dubbed with French voices and Maid Marian and Robin Hood and everyone else in Sherwood Forest were chattering marvelously away in the Gallic tongue. When the picture was over my son turned to me and said in his flawless French, “It was for-mi-da-ble, for-mi- da-ble! But, Mamma, you spoke better French then than you do now!”

And there was the evening not so long ago when I dined with a French publisher and his wife. After dinner, my hostess remarked on my accent, which, she observed, was “très personnel.” She said it wasn’t typically American and it wasn’t typically English. It was, she summed up, “légèrement Yugoslav”!

For dogs and children, of course, French is no problem at all. My Airedale, who came to France when he was fourteen, learned it in no time. We loved him very much and so he was a happy dog, although he had lost a leg in his early youth. As a matter of fact, his infirmity gave him a sort of distinction. I am sure he was the only bilingual, three-legged Airedale in existence.

And as for my son Ben, who was four when he settled down to live in France, he learned the language in six months and in two years won first prize in French in a French school. It just goes to show that we Americans can speak French if we just start early enough.

How is Ben’s English? Lovely, simply lovely. He speaks it just like Charles Boyer! Buy The Book
Olivia de Havilland began her film career at the age of eighteen playing Hermia in Max Reinhardt’s motion picture presentation of Shakespeare’s A Midsummer Night’s Dream. Her films have included The Adventures of Robin Hood, Gone with the Wind, The Snake Pit, and Hush…Hush Sweet Charlotte. Over the course of her esteemed career, she has won two Academy Awards (for her leading roles in To Each His Own and The Heiress), as well as two New York Critics Awards, two Golden Globes, and a National Board of Review Award. In 2008 she received the National Medal of Arts, and in 2010, the French Legion of Honour. She lives in Paris.

Olivia de Havilland began her film career at the age of eighteen playing Hermia in Max Reinhardt’s motion picture presentation of Shakespeare’s A Midsummer Night’s Dream. Her films have included The Adventures of Robin Hood, Gone with the Wind, The Snake Pit, and Hush…Hush Sweet Charlotte. Over the course of her esteemed career, she has won two Academy Awards (for her leading roles in To Each His Own and The Heiress), as well as two New York Critics Awards, two Golden Globes, and a National Board of Review Award. In 2008 she received the National Medal of Arts, and in 2010, the French Legion of Honour. She lives in Paris.