Julia Child Reflects on her First Meal in France

The master chef, in her own words.

By JULIA CHILD • 5 years ago 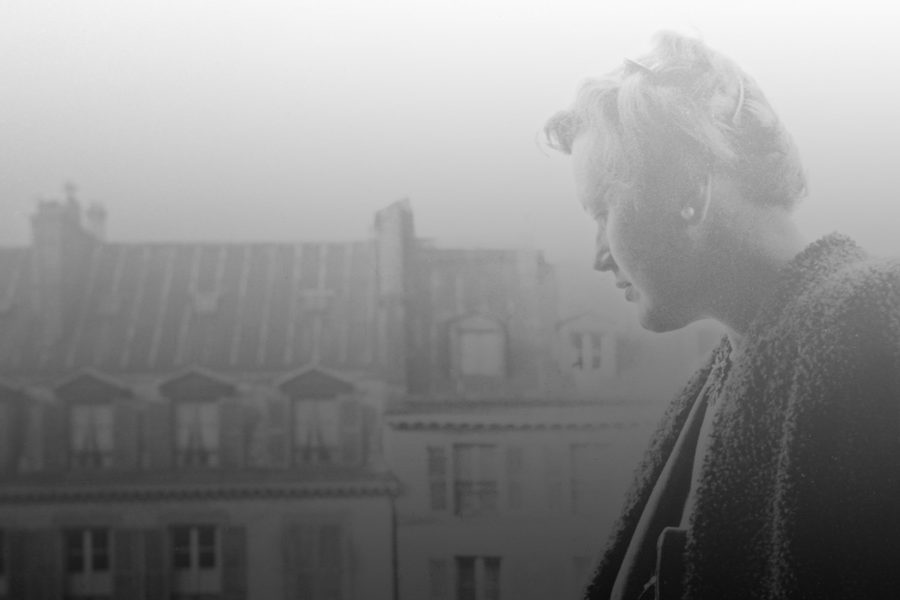 I was a six-foot-two-inch, thirty-six-year-old, rather loud and unserious Californian. The sight of France in my porthole was like a giant question mark.

The America entered Le Havre Harbor slowly. We could see giant cranes, piles of brick, bombed-out empty spaces, and rusting half-sunk hulks left over from the war. As tugs pushed us toward the quay, I peered down from the rail at the crowd on the dock. My gaze stopped on a burly, gruff man with a weathered face and a battered, smoldering cigarette jutting from the corner of his mouth. His giant hands waved about in the air around his head as he shouted something to someone. He was a porter, and he was laughing and heaving luggage around like a happy bear, completely oblivious to me. His swollen belly and thick shoulders were encased in overalls of a distinctive deep blue, a very attractive color, and he had an earthy, amusing quality that began to ease my anxiety.

So THAT’S what a real Frenchman looks like, I said to myself. He’s hardly Adolphe Menjou. Thank goodness, there are actual blood-and-guts people in this country!

By 7:00 a.m., Paul and I were ashore and our bags had passed through customs. For the next two hours, we sat there smoking and yawning, with our collars turned up against the drizzle. Finally, a crane pulled our large sky-blue Buick station wagon—which we’d nicknamed “the Blue Flash”—out of the ship’s hold. The Buick swung overhead in a sling and then dropped down to the dock, where it landed with a bounce. It was immediately set upon by a gang of mécaniciens, men dressed in black berets, white butcher’s aprons, and big rubber boots. They filled the Flash with essence, oil, and water, affixed our diplomatic license plates, and stowed our fourteen pieces of luggage and half a dozen trunks and blankets away all wrong. Paul tipped them, and restowed the bags so that he could see out the back window. He was very particular about his car-packing, and very good at it, too, like a master jigsaw-puzzler.

As he finished stowing, the rain eased and streaks of blue emerged from the gray scud overhead. We wedged ourselves into the front seat and pointed our wide, rumbling nose southeast, toward Paris.

The Norman countryside struck me as quintessentially French, in an indefinable way. The real sights and sounds and smells of this place were so much more particular and interesting than a movie montage or a magazine spread about “France” could ever be. Each little town had a distinct character, though some of them, like Yvetot, were still scarred by gaping bomb holes and knots of barbed wire. We saw hardly any other cars, but there were hundreds of bicyclists, old men driving horses-and-buggies, ladies dressed in black, and little boys in wooden shoes. The telephone poles were of a different size and shape from those in America. The fields were intensely cultivated. There were no billboards. And the occasional pink-and-white stucco villa set at the end of a formal allée of trees was both silly and charming. Quite unexpectedly, something about the earthy-smoky smells, the curve of the landscape, and the bright greenness of the cabbage fields reminded us both of China. 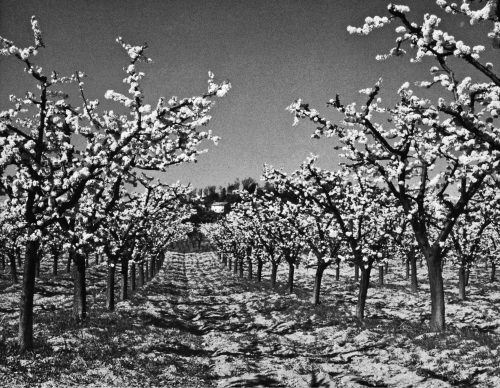 Oh, la belle France—without knowing it, I was already falling in love!

At twelve-thirty we Flashed into Rouen. We passed the city’s ancient and beautiful clock tower, and then its famous cathedral, still pockmarked from battle but magnificent with its stained-glass windows. We rolled to a stop in la Place du Vieux Marché, the square where Joan of Arc had met her fiery fate. There the Guide Michelin directed us to Restaurant La Couronne (“The Crown”), which had been built in 1345 in a medieval quarter-timbered house. Paul strode ahead, full of anticipation, but I hung back, concerned that I didn’t look chic enough, that I wouldn’t be able to communicate, and that the waiters would look down their long Gallic noses at us Yankee tourists.

It was warm inside, and the dining room was a comfortably old-fashioned brown-and-white space, neither humble nor luxurious. At the far end was an enormous fireplace with a rotary spit, on which something was cooking that sent out heavenly aromas. We were greeted by the maître d’hôtel, a slim middle-aged man with dark hair who carried himself with an air of gentle seriousness. Paul spoke to him, and the maître d’ smiled and said something back in a familiar way, as if they were old friends. Then he led us to a nice table not far from the fireplace. The other customers were all French, and I noticed that they were treated with exactly the same courtesy as we were. Nobody rolled their eyes at us or stuck their nose in the air. Actually, the staff seemed happy to see us.

As we sat down, I heard two businessmen in gray suits at the next table asking questions of their waiter, an older, dignified man who gesticulated with a menu and answered them at length.

“What are they talking about?” I whispered to Paul.

“The waiter is telling them about the chicken they ordered,” he whispered back. “How it was raised, how it will be cooked, what side dishes they can have with it, and which wines would go with it best.”

“Wine?” I said. “At lunch?” I had never drunk much wine other than some $1.19 California Burgundy, and certainly not in the middle of the day.

In France, Paul explained, good cooking was regarded as a combination of national sport and high art, and wine was always served with lunch and dinner. “The trick is moderation,” he said. 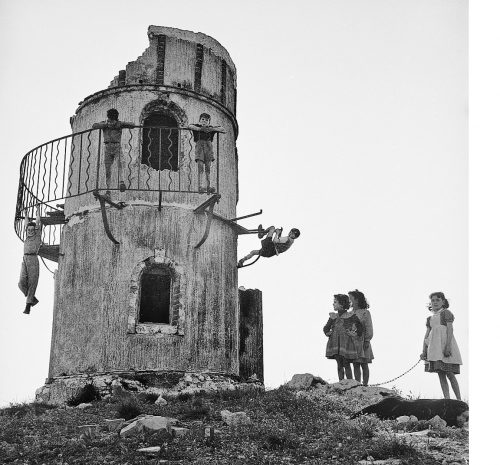 Suddenly the dining room filled with wonderfully intermixing aromas that I sort of recognized but couldn’t name. The first smell was something oniony—“shallots,” Paul identified it, “being sautéed in fresh butter.” (“What’s a shallot?” I asked, sheepishly. “You’ll see,” he said.) Then came a warm and winy fragrance from the kitchen, which was probably a delicious sauce being reduced on the stove. This was followed by a whiff of something astringent: the salad being tossed in a big ceramic bowl with lemon, wine vinegar, olive oil, and a few shakes of salt and pepper.

My stomach gurgled with hunger.

I couldn’t help noticing that the waiters carried themselves with a quiet joy, as if their entire mission in life was to make their customers feel comfortable and well tended. One of them glided up to my elbow. Glancing at the menu, Paul asked him questions in rapid-fire French. The waiter seemed to enjoy the back-and-forth with my husband. Oh, how I itched to be in on their conversation! Instead, I smiled and nodded uncomprehendingly, although I tried to absorb all that was going on around me.

We began our lunch with a half-dozen oysters on the half-shell. I was used to bland oysters from Washington and Massachusetts, which I had never cared much for. But this platter of portugaises had a sensational briny flavor and a smooth texture that was entirely new and surprising. The oysters were served with rounds of pain de seigle, a pale rye bread, with a spread of unsalted butter. Paul explained that, as with wine, the French have “crus” of butter, special regions that produce individually flavored butters. Beurre de Charentes is a full-bodied butter, usually recommended for pastry dough or general cooking; beurre d’Isigny is a fine, light table butter. It was that delicious Isigny that we spread on our rounds of rye.

Rouen is famous for its duck dishes, but after consulting the waiter Paul had decided to order sole meunière. It arrived whole: a large, flat Dover sole that was perfectly browned in a sputtering butter sauce with a sprinkling of chopped parsley on top. The waiter carefully placed the platter in front of us, stepped back, and said: “Bon appétit! ”

I closed my eyes and inhaled the rising perfume. Then I lifted a forkful of fish to my mouth, took a bite, and chewed slowly. The flesh of the sole was delicate, with a light but distinct taste of the ocean that blended marvelously with the browned butter. I chewed slowly and swallowed. It was a morsel of perfection.

In Pasadena, we used to have broiled mackerel for Friday dinners, codfish balls with egg sauce, “boiled” (poached) salmon on the Fourth of July, and the occasional pan-fried trout when camping in the Sierras. But at La Couronne I experienced fish, and a dining experience, of a higher order than any I’d ever had before.

Along with our meal, we happily downed a whole bottle of Pouilly-Fumé, a wonderfully crisp white wine from the Loire Valley. Another revelation! 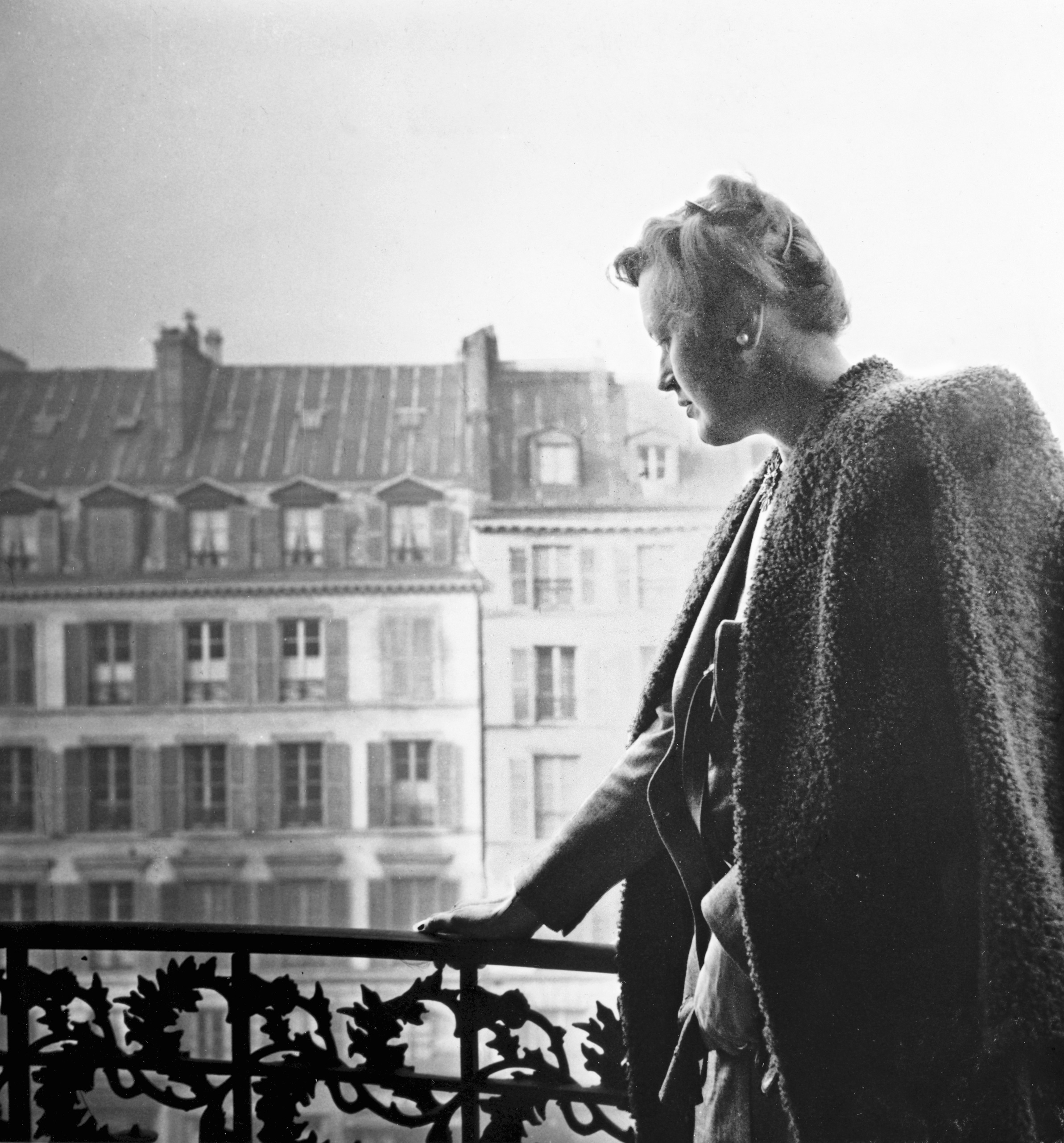 Then came salade verte laced with a lightly acidic vinaigrette. And I tasted my first real baguette—a crisp brown crust giving way to a slightly chewy, rather loosely textured pale-yellow interior, with a faint reminder of wheat and yeast in the odor and taste. Yum!

We followed our meal with a leisurely dessert of fromage blanc, and ended with a strong, dark café filtre. The waiter placed before us a cup topped with a metal canister, which contained coffee grounds and boiling water. With some urging by us impatient drinkers, the water eventually filtered down into the cup below. It was fun, and it provided a distinctive dark brew.

Paul paid the bill and chatted with the maître d’, telling him how much he looked forward to going back to Paris for the first time in eighteen years. The maître d’ smiled as he scribbled something on the back of a card. “Tiens,” he said, handing it to me. The Dorin family, who owned La Couronne, also owned a restaurant in Paris, called La Truite, he explained, while Paul translated. On the card he had scribbled a note of introduction for us.

“Mairci, monsoor,” I said, with a flash of courage and an accent that sounded bad even to my own ear. The waiter nodded as if it were nothing, and moved off to greet some new customers.

Paul and I floated out the door into the brilliant sunshine and cool air. Our first lunch together in France had been absolute perfection. It was the most exciting meal of my life.

“© The Julia Child Foundation for Gastronomy and the Culinary Arts and Alex Prud’homme, reprinted with permission by Anchor Books, an imprint of Penguin Random House, LLC.”

“Photo by Paul Child, © The Julia Child Foundation for Gastronomy and the Culinary Arts, used with permission.” 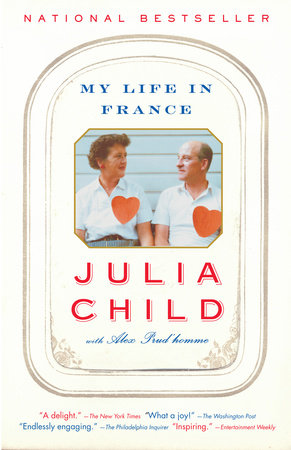 Buy The Book
Julia Child was born in Pasadena, California. She graduated from Smith College and worked for the OSS during World War II; afterward she lived in Paris, studied at the Cordon Bleu, and taught cooking with Simone Beck and Louisette Bertholle, with whom she wrote the first volume of Mastering the Art of French Cooking (1961). In 1963, Boston’s WGBH launched The French Chef television series, which made Julia Child a national celebrity, earning her the Peabody Award in 1965 and an Emmy in 1966. Several public television shows and numerous cookbooks followed. She died in 2004.

Julia Child was born in Pasadena, California. She graduated from Smith College and worked for the OSS during World War II; afterward she lived in Paris, studied at the Cordon Bleu, and taught cooking with Simone Beck and Louisette Bertholle, with whom she wrote the first volume of Mastering the Art of French Cooking (1961). In 1963, Boston’s WGBH launched The French Chef television series, which made Julia Child a national celebrity, earning her the Peabody Award in 1965 and an Emmy in 1966. Several public television shows and numerous cookbooks followed. She died in 2004.