53 years ago, President Kennedy was assassinated in Dallas. Read this stunning eyewitness account from The Torch is Passed by The Associated Press.

By The Associated Press • 4 years ago 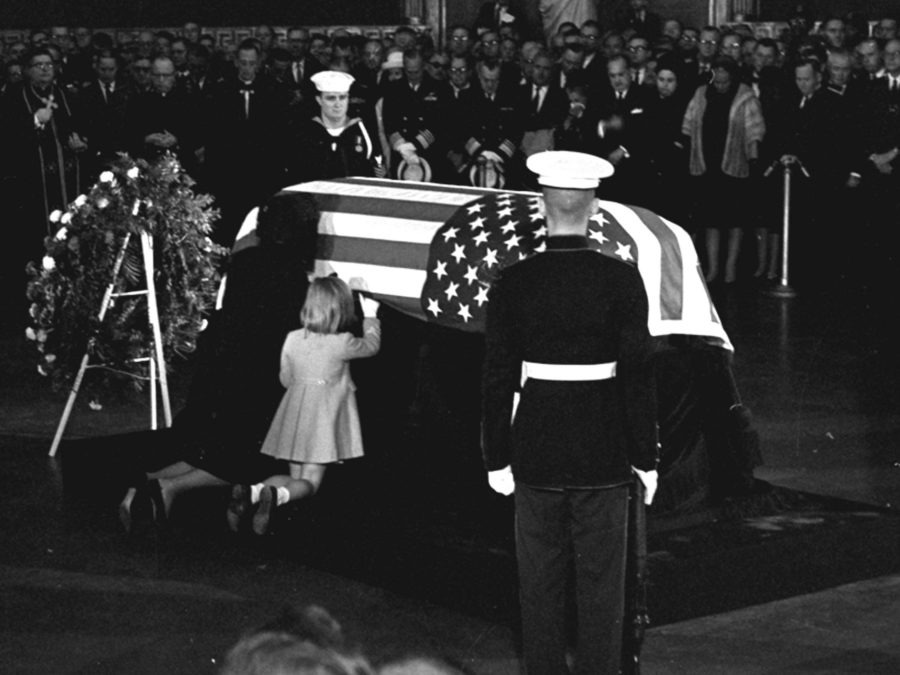 A fraction of a second before 12:30 P.M., Friday, November 22, 1963, John Fitzgerald Kennedy was smiling broadly. He would never smile again.

The President probably never heard the shot or knew what hit him. It was a piece of metal a little thinner than an ordinary pencil. It struck him in the back, penetrating two to three inches. He was struck as he turned to his right to wave. His hands snapped up reflexively to his throat. Wordlessly, he slumped over toward his wife, who was sitting on his left in the back seat.

In the jump seat ahead, Gov. John Connally turned and a second bullet caught him in the back, passed through, struck his right wrist and lodged in his thigh. The third and last shot hit the back of the President’s head about ear-level, as he was bowed forward.

“His head exploded in blood,” said James Chaney, a motorcycle patrolman who was six feet away.

“If I could have, I would have turned away,” said AP photographer James “Ike” Altgens, thirty feet away. “Blood covered the whole left side of his head.”

“Mrs. Kennedy cried out, in the first instant of horror: “Oh, my God, they killed my husband! Jack! Jack!” The verb was already accurate. For all medical purposes, doctors said later, the President was then beyond help. It had all happened in about five seconds.

A motorcycle cop veered toward a curb and almost fell off his machine…Another officer dropped to the ground, gun drawn…A man on one of the little greenswards that flanked Elm Street wildly beat his fists on the earth…A man pushed a woman to the ground protectively…Women ran…Secret Service men behind the President’s car pulled rifles and machine guns out of nowhere like lethal magicians…A man grabbed up his little girl and broke into a run, a policeman in pursuit…Men gasped…What in God’s name had happened?…

Altgens, the photographer, fired his camera at the first shot without knowing that he was recording violent history. Suddenly he realized what he had seen through his lens. The thought — the fact — paralyzed him momentarily. Then he snapped again and broke for a phone.

Ten feet away stood Alan Smith, 14, who had skipped school to see the President: “Mr. Kennedy had a big wide smile. When he was hit his face turned blank, no smile, no frown. Nothing. He fell over Jackie’s knees and didn’t say anything. She stood up screaming ‘God, oh God, no!’ There was blood all over her and everything. It made me weak. I felt like sitting down.” Norman Similas, 34, a Canadian from Willowdale, Ont., in Dallas at a convention, saw a Secret Service man open the car door as the President slumped to the floor. “His head and hair were bathed in blood. The agent looked in and gasped ‘My God, he’s dead!’”

Mrs. Kennedy, as did many others, thought the first shot was a backfire from one of the many motorcycles. “They can’t be firing a 21-gun salute,” was the puzzled first thought of the President’s Army aide, Maj. Gen. Chester Clifton, who was back in the caravan. But Senator Yarborough felt it was more than that. He had finally accepted Johnson’s offer and was riding with the Vice President and his wife, Lady Bird, three cars behind the President.

“It didn’t sound like “a firecracker,” said the Senator. “I knew it wasn’t, right off. It was too loud and there was a sort of concussion. I knew right away that something terrible, terrible was wrong.”

To Jack Bell, AP reporter in the fourth car, the first shot sounded like a giant firecracker echoing behind him down the canyon of tall buildings. The next two shots exploded those thoughts and Bell lurched for a radio phone.

Dallas Police Chief Jesse Curry, riding at the head of the motorcade, knew disaster had struck. He ordered police to dash back toward that red brick building, the Texas Book Depository Building. Secret Service men in the special car nicknamed the “Queen Mary” had already sniffed trouble like alert bird dogs and had turned back toward the building even while bystanders were still waving joyously at the President.

And there was no doubt in the mind of H. I. Brennan, a 44-year-old steamfitter. He had seen it all. “I saw him. The gun was sticking out the window. I saw him fire a second time. He didn’t seem to be in no hurry.”

An agent in the President’s car grabbed a radiotelephone. “Let’s go straight to the nearest hospital!” he shouted to police up ahead. The presidential car, a specially built 1961 Lincoln, broke out of line and screeched off. At speeds reaching 70 miles an hour, rounding some corners on two wheels, it fled toward the hospital, three-and-a-quarter miles distant. Mrs. Kennedy and Mrs. Connally hunched low, cradling their bloody husbands. Agent Clint Hill, who had jumped aboard the car as Mrs. Kennedy reached back to him in a dramatic gesture for succor, shepherded them with another agent who had been riding up front.

“Take it easy!” cried someone. “If he’s not dead we don’t want to kill him now.”

Behind them sped the car of the Vice President who was buried beneath the bulk of Secret Service man Rufus Youngblood. Youngblood, true to the harsh code of his job, had jumped on top of Johnson and his wife, ready to sacrifice his life for theirs.

In the fourth car, the press “pool” car, Bell and Merriman Smith of United Press International were now wrestling for the car’s one phone for the biggest story of their lives as the vehicle shot hell-bent up the highway.

Back on Elm Street things were in an uproar. At the first shots someone in the press bus way back in the motorcade cried, “My God, they’re shooting at the President!” But no one knew for sure. Some newsmen hollered for the bus to stop. But it sped off to the Trade Mart, dutifully sticking to a schedule that suddenly was no more.”

“The cameraman, Altgens, dashed to a phone. Bob Johnson, chief of the Dallas AP bureau, took the call.

“Bob, the President has been shot!”

“I saw it. There was blood on his face. Mrs. Kennedy jumped up and grabbed him and cried, ‘Oh, no!’ The motorcade raced onto the freeway.”

“Yes. I was shooting pictures and then I saw it.”

Johnson’s fingers were already in flight:

“DALLAS, NOV. 22 (AP)—PRESIDENT KENNEDY WAS SHOT TODAY JUST AS HIS MOTORCADE LEFT DOWNTOWN DALLAS. MRS. KENNEDY JUMPED UP AND GRABBED MR. KENNEDY. SHE CRIED, “OH, NO!” THE MOTORCADE SPED ON.”

“It sped on, leaving police fanning out looking for something, anything, anywhere. Gun drawn, a motorcycle patrolman ran up to the book building. The manager, Truly, spotted him and dashed into the building with him. Fleetingly, Truly noticed the odd fact that all the elevators were on the top floor. He and the officer ran up the stairs. Puffing behind, Truly reached the second floor to see the officer holding his gun on a man who was sipping a soda pop near two vending machines in a little cafeteria room.

“Does this man belong in here?” barked the policeman.

Satisfied, the manager and the officer left Lee Harvey Oswald at 12:33 and ran off in search of the assassin.

Excerpt From: “The Torch Is Passed.” Used with permission from Diversion Books/The Associated Press

Read it Forward, in conjunction with Diversion Books and The Associated Press, is giving away 5 e-book copies of The Torch is Passed, Triumph and Tragedy: The Story of the Kennedys’ Early Years, and The Warren Report.  Enter for a chance to win here.

To purchase The Torch is Passed and other AP Books, click here.

About The Associated Press

From The Associated Press comes an updated reissue of The Torch is Passed, a seminal examination of President John F. Kennedy’s assassination and his enduring legacy.

Written by a select team of special correspondents for the AP, this chronicle captured a nation’s disbelief and sorrow shortly after the president’s assassination. It remains one of the most powerful accounts of the death of President Kennedy and its aftermath, exploring America’s mourning and looking to the country’s future.

Featuring photos from the AP’s archive, The Torch Is Passed is a poignant tribute to President John F. Kennedy, as touching and relevant today as it was when first published.