As it turns out, The Green Fairy served as muse for many a writer.

By Arianna Davis • 5 years ago 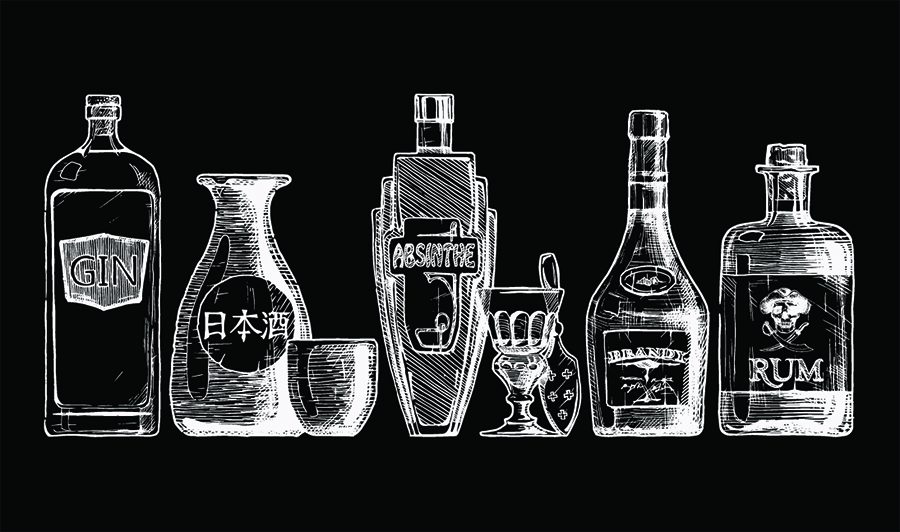 Paris is famous for giving the world many things, from street lights and movie theaters to croissants and chic style. But we can’t forget one of the most important gifts given to us by The City of Lights: The endless, alcohol-fueled inspiration that led rising authors in the late 19th and early 20th centuries to stumble and write their way to greatness. Here, we share the hard drinking that inspired some of the literary canon’s hardest writing—including each auteur’s poison of choice, in case you’re in the mood to cuddle up with a book by one of these legends accompanied by a cocktail (or two).

Sure, the writer was linked to Cuban mojitos (he spent a lot of time in Cuba later in life), but he was, first and foremost, notoriously a drinker of absinthe. Also known as “The Green Fairy,” he drank the substance in an almost mimosa-like concoction called Death In the Afternoon (after his novel, of course). “Pour one jigger absinthe into a champagne glass. Add iced champagne until it attains the proper opalescent milkiness,” he wrote in a 1935 collection of cocktail recipes. But there’s one part of his instructions that are quite different from your typical cocktail recipe: “Drink three to five of these slowly.” À votre santé—but at your own risk!

Of course the mind behind The Great Gatsby’s epic champagne-filled parties had a drink or two in his day. He and his wife Zelda were infamous for their sometimes glamorous, sometimes disturbing drunken antics, in Paris especially. Fitzgerald’s drinking did not turn out well for him—his alcoholism was the root of chronic health problems and the dissolution of his marriage to Zelda—but his addiction to gin rickeys did bring us some of the greatest literature of the 1920’s and 30’s. To taste one of the drinks for yourself, mix 2 shots of gin, ¾ ounces of lime juice, and club soda, then serve over ice with a lime garnish.

The man responsible for Remembrance of Things Past (and the ever-handy Proust Questionnaire) was known for throwing a celebratory dinner, complete with good food and, of course, many, many drinks. Like most of his fellow writers, he was a frequent imbiber himself—but rather than opt for hardcore boozes such as absinthe, gin, or whiskey, Proust often raised a glass full of chilled champagne. Specifically: Veuve Clicquot. “While drinking a bottle of Veuve Clicquot Champagne,” the Paris native once wrote, “I could feel happiness penetrating my whole existence.” We have to say: We feel the same way.

The Irish playwright and author is known as much for his whip-smart, reflective writing as he is for his quotes on his penchant for poison (ever heard the infamous one “Work is the curse of the drinking class”?). And it was in Paris that his adoration for absinthe began, where he often wandered the boulevards wasting away what little money he earned from writing on alcohol. But his drinking habit didn’t end there: He also developed a love for champagne, which was reportedly part of the pain-easing opium cocktail he downed in his final days in Paris before he passed away from cerebral meningitis.

Credited as one of literature’s earliest short story writers, de Maupassant was prolific at the art form; to this day, his “Boule de Suif” is considered a masterpiece by readers and critics. But the writing prodigy was also deeply troubled, suffering from mental health issues that likely weren’t helped by his equally deep love of—you guessed it!—absinthe. Before his death at an asylum in Paris in 1893, he penned hundreds of short stories, including “A Queer Night in Paris” (which you can read here), a tale about an evening in Paris full of his go-to alcohol.

Thomas Stearns Eliot—most likely known to readers by his pen name, T.S. Eliot—was an esteemed poet and essayist who gained notoriety for The Love Song of J. Alfred Prufrock and won the 1948 Nobel Prize in Literature for his contributions to poetry. He also built a reputation around his love of a good drink, evident by a play titled “The Cocktail Party” and his hilarious response to how he finds his writing inspiration: “Gin and drugs, dear lady, gin and drugs.” He even once admitted to fellow writer Elizabeth Bowen that, indeed, he needed alcohol to get him in the mood to write. But our favorite story about Eliot’s love of drink? His cat was named Noilly Prat—after the brand of vermouth.

ARIANNA DAVIS began her obsession with reading with The Baby-Sitter’s Club. While she’s since graduated to more adult titles (ok, so she did reread Twilight a few times…), her passion for books has remained the same. A Maryland native, she now lives in Long Island City, New York, where she likes to try new restaurants and read along the water. Her own writing has been published in Us Weekly, O, The Oprah Magazine, New York Magazine, Pop Sugar, and more. Follow her adventures on Instagram: @ariannagab