We love our book blogger friends. Kathy at BermudaOnion has been a member of the RIF community for years. Her sister Karen won a copy of Adam Sternbergh's Shovel Ready from us and wrote a review.

But first, here’s what Shovel Ready is all about: Spademan used to be a garbage man. That was before the dirty bomb hit Times Square, before his wife was killed, and before the city became a blown-out shell of its former self. Now he’s a hitman.

In a near-future New York City split between those who are wealthy enough to “tap in” to a sophisticated virtual reality, and those who are left to fend for themselves in the ravaged streets, Spademan chose the streets.

Shovel Ready, Adam Sternbergh’s debut novel, is one heck of a good read. It grabs you from page one and never lets go. I really like his Spademan character even if he is a hitman. He is flawed, but he does have his redeeming qualities. Told mainly through a series of dialogues the book is a fairly quick read.

It’s dystopian fiction that draws the reader’s thoughts to present day issues of religion, ethics and technology. If you’re not a fan of dystopian I think you’ll still enjoy this suspenseful novel. Mr. Sternbergh is at work on a second Spademan story which I’m very much looking forward to.

Makes you want to read it, right? Get the full review at BermudaOnion.net.

[Editor’s note: Shovel Ready is now available in paperback. Adam Sternbergh’s new novel, Near Enemy, will be available wherever books are sold in January 15, 2015.] 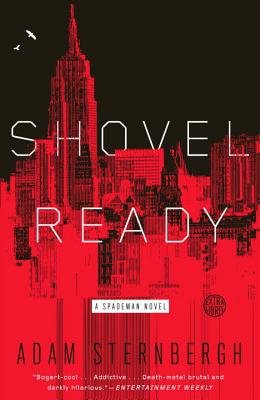 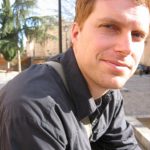 ADAM STERNBERGH is a contributing editor for New York magazine and Vulture. Formerly culture editor of The New York Times Magazine, his writing has appeared in GQ and the Times of London and on This American Life. He currently lives in Brooklyn with his family. Near Enemy is his second novel. Visit him online at AdamSternbergh.com and follow him on Twitter @sternbergh.