What's the best biography you've ever read, and what did you love about it? Tell us in the comments!

“When I think of Frank and Eleanor in the White House I could grind my teeth to powder and blow them out my nose,” Alice once said. In the 1930s they even wrote opposing syndicated newspaper columns and embarked on competing nationwide speaking tours. Blood may be thicker than water, but when the family business is politics, winning trumps everything.

Vivid, intimate, and stylishly written, Hissing Cousins finally sets this relationship center stage, revealing the contentious bond between two political trailblazers who short-circuited the rules of gender and power, each in her own way.

“‘Alice collected vices: smoking, gambling, gossiping, sleeping past noon: she was like a Girl Scout in reverse, gathering demerit badges.’

A wonderful read and a very interesting look inside the Hyde Park and Oyster Bay Roosevelt families, represented by Eleanor Roosevelt and Alice (Princess Alice) Roosevelt Longworth. They were two of America’s most famous and politically astute women, also known as Mrs. Democrat and Mrs. Republican.

Eleanor is the better remembered of the two for all her humanitarian work, My Day columns, speaking ability, and ‘everyman’ touch. Alice not so much. She whispered in the background, displayed her cutting wit and sometimes cruel opinions at Washington dinners.

When her father, Theodore, was running for a third term with the Bull Moose party, Alice was quite okay with that but when her cousin FDR did, she compared him to Hitler, Mussolini, and King George. On her death certificate for occupation is the word ‘gadfly.’ Ouch!”

Congrats to Carol Ann W., Cyndie I., Shannon K., Tracy S., Jason B., and 5 other members of the Read It Forward community! Their entries were selected at random to win a hardcover copy of Hissing Cousins by Marc Peyser and Timothy Dwyer. 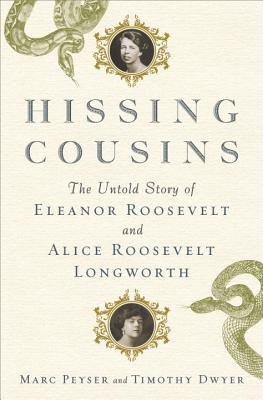 Buy The Book
MARC PEYSER is a writer and former deputy editor at both Newsweek and Budget Travel. His work has appeared in the New York Times, Life, Vogue, Time Out New York, Condé Nast Traveler, and the Best Business Writing, 2003. He is currently the deputy editor of All You magazine. TIMOTHY DWYER was raised on Long Island’s Eatons Neck, swimming distance from Theodore Roosevelt’s homestead at Sagamore Hill. He studied history and politics at Georgetown University’s School of Foreign Service and at the College of Europe in Bruges, Belgium. His work has appeared in Time and TheAtlantic.com. He is the chief executive officer of The School of Choice Group, an education advisory company.