How to Read It Forward Across Generations

The “first impression” my boyfriend's dad had of me was The Sparrow's very dark, graphic, anti-faith ending.

When my mom first gave me a copy of The Sparrow by Mary Doria Russell for Christmas 2010, I accepted it with some trepidation: OK, it’s sci-fi, but her book club read it. They’re a bunch of moms who aren’t very in touch with the genre.

But a few months later, I took a writing class in which one of the students recommended “this amazing 1990s sci-fi novel, about Jesuit priests trying to colonize a planet and failing mightily – oh, and the main character gets his hands all mutilated by the aliens!”

On a hunch, I opened The Sparrow for the first time – and in the first few pages, there was Father Emilio Sandoz, who would go on to become one of my favorite literary characters, and his poor hands stripped of flesh.

From there, I was hooked. Before I even knew the how and why of the Jesuits’ failed mission to Rakhat and Emilio’s personal hell as the sole survivor, I had fallen in love with all of the characters. Agnostic after thirteen years of Catholic school, I nonetheless appreciated a sci-fi parable about how seeming coincidences and chances of fate bring people together, and how faith can propel you through space and time.

When I started dating my boyfriend Matt last August, as we were in that early phase of excitedly sharing all of our favorite media, I pressed a copy of The Sparrow into his hands. And while he read it just as speedily as I had hoped he would, what surprised me was that he immediately passed it on to his own father.

Now, his dad is a lot more religious than either of us, and I hadn’t met the man . . . so the “first impression” he had of me was this book’s very dark, graphic, anti-faith ending. But Matt was adamant: He knew his dad well – the same way my mom gauged my tastes, four years prior – and believed he would get something out of the experience.

After his dad finished The Sparrow, he immediately asked Matt, “Is there a sequel?” He then devoured Children of God in a matter of days, and turned the tables by raving about it to Matt. (He and I weren’t surprised when that happened, considering that the sequel has a much more optimistic view of faith and God.) It’s been a delight to watch Russell’s books cross back and forth over generations, with different perspectives – mothers, fathers, sci-fi fans, religious beliefs – influencing which parts of which books we use as selling points.

I’ve found that that’s the best way to share a book with someone older or younger than you – to find a touchpoint based on the reader’s personal interests, rather than playing into preconceived notions about generational differences. By thinking more about the specific reader than his or her demographic, you may surprise yourself by making a match between them and your favorite book. 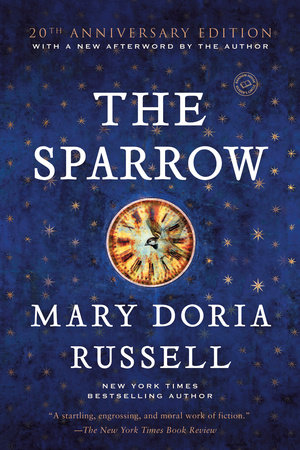 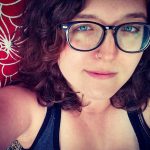 NATALIE ZUTTER has always been a voracious reader, from reading Agatha Christie and Entertainment Weekly above her age level as a kid to squeezing 52 books into 2014. (Hoping to match that record in 2015!) She also writes plays about superheroes and sex robots, and Tumblr rants about fandom. You can find her giggling over pop culture memes on Twitter.