My Husband and I Tried Reading To Each Other

Have you and your partner read to each other? If not, would you give it a try?

By Dorothy Robinson Scott • 5 years ago 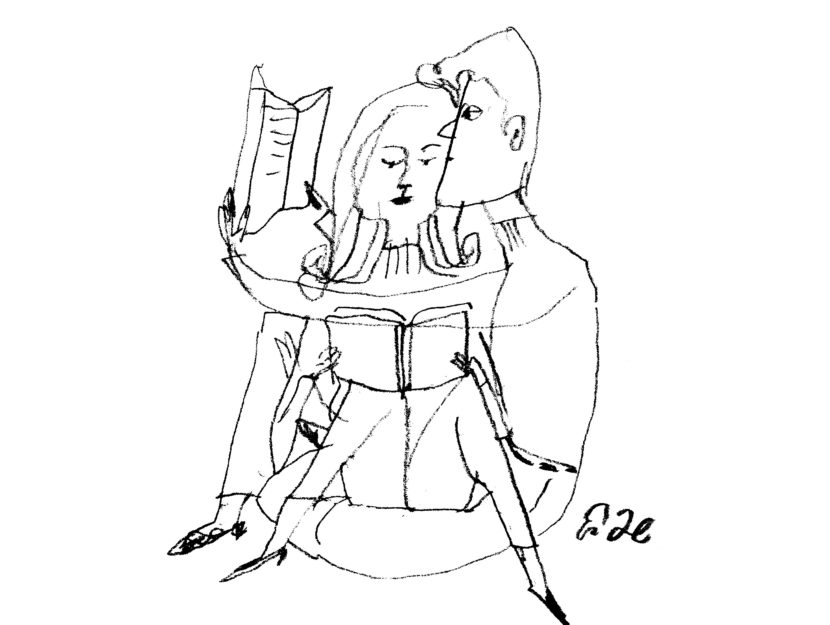 Apparently some couples out there read to one another.

And it’s not because one of them is blind.

My friend Aaron told my husband and me this factoid one night over dinner. He swears he’s heard of at least three couples he knows who are doing this—maybe even more.

It should be known that Aaron and his husband are much cooler than my husband and me. They still live in the city instead of the suburbs. They are childless and do fun, interesting things like eat dinner in restaurants and see live theater. By comparison, my husband and I watch TV while eating frozen Trader Joe’s and fall asleep by 9:30 p.m. every night. I trust in their trend-setting.

After that fateful conversation with Aaron, I stumbled upon this story and now I’m pretty sure that reading in bed to one another is a bonafide trend.

And although my husband and I do live in the suburbs and fall asleep at 9:30 p.m. every night, I am not so dead inside that I don’t want to participate in the zeitgeist. This was a trend that takes minimal effort. I wouldn’t even have to talk to new people or shop. Showering was optional.

It is everything I ever wanted in a trend.

“I’m going to read to you tonight,” I told my husband while walking the dog one recent morning.

“Um, is that a euphemism for something?” he replied, his eyebrow cocked.

“Nope. I’m going to read to you. Apparently, it’s really good for our relationship and will help us bond.”

My husband shrugged. “Okay. As long as it’s not an essay about child-birthing or something as equally as awful. I’m game.”

I guess I will explain here that I’m currently 8 and a half months pregnant with our second child. Hence my reluctance in participating in trend-setting (or anything at all, for that matter). Because of the fact I’m currently gestating and my back feels like that of an 84-year-old linebacker’s, I spend a lot of time supine on the couch looking at my iPhone. And, yes, perhaps some of my current reading repertoires may revolve around what Google tells me regarding the beauties of childbirth and then me relating to my husband the various injustices that are about to befall my body.

“This will be different,” I promise. “You get to pick the book.”

That night, we got into bed, and my husband handed me his iPad. He was already three chapters into Butcher’s Crossing. We didn’t want to start another book (I was already pretty heavily into Margaret Atwood’s latest, The Heart Goes Last) so I had him give me the backstory, which is that it’s a Western regarding frontier life in 1870’s Kansas. There’s Buffalo hunting and spirit quests and all kinds of man versus nature stuff.

I settled in and began.

I wish I could tell you here that what followed was a mind-bending experience of spiritual interconnectedness; the kind that poets and philosophers can only dream of. That it led to Sting and Trudie Styler-level-intimacy, but instead of 7-hour tantric sex, we had 7 hours of true togetherness by just reading and listening. That because of this little activity, we bonded closer than we ever have before. That it was, basically, a revelation to our relationship.

What really happened: I read for 20 minutes and then we fell asleep.

Because I am terrible at reading comprehension when I read out loud, I had zero idea of what was actually written. My husband felt uncomfortable because he didn’t know where “to put his eyes,” as he put it. I got thirsty and had to stop and waddle to the bathroom for a glass of water.

However, it wasn’t a total bust. Instead of gazing at our individual electronic devices and then falling asleep like we usually do, this activity opened up a conversation. We talked; mainly why he was reading this book (he wanted a Western; Google recommended this one). We Googled the author’s name—John Williams—and stumbled upon the fact that he shares the same name as a composer who has scored every single one of the Star Wars series, the first two Jaws films, E.T., Schindler’s List, Saving Private Ryan—the list goes on. We then talked about what it must be like to be that successful. We talked about how hard it must have been to live in Kansas in 1870 without cell phones or radar trackers. It wasn’t the deepest 10-minute conversation the two of us have ever had, but it was a conversation that didn’t revolve around work, our kid, our impending kid and what kind of frozen Trader Joe’s meal we were going to make for dinner.

And I didn’t once read off my iPhone about terrible things regarding placentas or episiotomies.

And for that, we were grateful.

DOROTHY ROBINSON is a writer and editor who lives in Maplewood, NJ. You can follow her on Twitter @dorothyrobinson.