How Much My Life Weighs

On moving 2,500 books across the country. 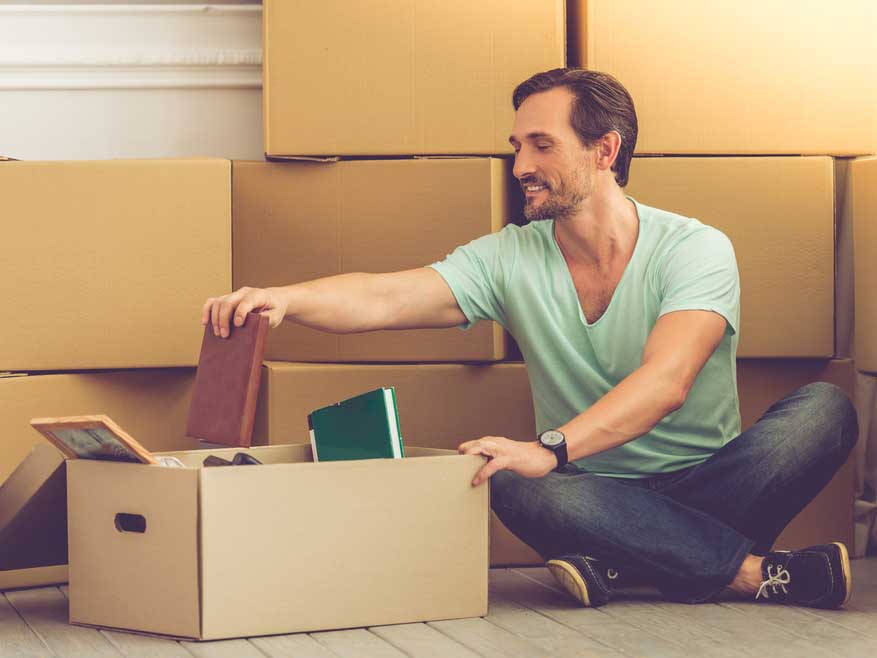 In Jason Reitman’s 2009 film Up in the Air, George Clooney’s character Ryan Bingham asks a group of people a metaphorical question: “How much does your life weigh?” Though ordinarily a guy who companies hire to come in and fire off employees, he’s a motivational speaker on the side, so his question is meant to invoke the pressure the things we own put on our lives:

Imagine for a second that you’re carrying a backpack. I want you to feel the straps on your shoulders. Feel ’em? Now I want you to pack it with all the stuff that you have in your life. You start with the little things. The things on shelves and in drawers, the knickknacks, the collectibles. Feel the weight as that adds up. Then you start adding larger stuff, clothes, tabletop appliances, lamps, linens, your TV.

To this already impossibly full backpack Bingham asks the audience to “go bigger” and stuff couches and tables and even houses into the bag. “Now try to walk,” he says. “It’s kind of hard, isn’t it? This is what we do to ourselves on a daily basis. We weigh ourselves down until we can’t even move. And make no mistake, moving is living.”

Moving is living. I’m not certain how capital-T true that phrase is, but when I think of my life, it seems absolutely spot-on, though it might be more accurate in my case to say, Living is moving, because I’ve lived in a lot of different places and always seem to be moving from city to city, state to state, and with each move, bringing more and more weight with me. I’m always moving. But I’m not quite sure I’m always living.

I have an estimated 2,500 books. For most of my life, my books have been supplemental to my writing—now that I’m a literary critic, they are integral. I can’t give up a large chunk of my library any more than a painter can give up their paint. Books are my materials; my essays are the art.

Recently I moved from North Carolina to Columbus, Ohio, for which I packed up each and every one of those 2,500 books, carried them with the help of my partner Jess into a moving truck, and then with the assistance of my brother Graham, my mother, her partner George, and Jess again unloaded them into our new home. All told, the process lasted about a month. See, while I packaged up the books I catalogued a number of the boxes, so that they may remain temporarily stored without taking away access to their contents (at least for perusal’s sake), which means that I wasn’t merely throwing the books into cardboard but methodically itemizing them as I did so, alphabetically by author.

This necessarily afforded me a lovely re-acquaintance with my collection, a title-by-title review of what amounts to the bulk of the purchases I’ve made throughout my life. These are the items I’ve plucked from stores to bring home; the gifts I’ve received from friends, family, and significant others; the treasures I’ve discovered in unlikely places; and the building blocks of the (so far) shaky foundation of my career. These books have given me so much—inspiration, education, solace, and companionship, to name but a few—and here they are, still with me. But what should have been a wonderful reunion of sorts turned very quickly into a punishing and excruciating experience.

Because—I think I mentioned it already—I have 2,500 books. That shit was a nightmare to move. This was the move that for years everyone warned me of—“You say that now,” they say to my claim that I’ll never get rid of my books, “but wait until you’re in your thirties and you’ve got thousands of ‘em and then you move across the country. Then you’ll reconsider that.” And as I lifted each box and trudged toward whatever location to which I meant to take it, I found myself recalling all those premonitions with begrudging annoyance. Shit, I thought, They were right. I hate these goddamn things.

After Ryan Bingham, in Up in the Air, gets everyone to imagine a bookbag with all their shit in it, he surprises his audience by saying, “Now, I’m gonna set that backpack on fire.” To the shocked faces, he says, “In fact, let everything burn and imagine waking up tomorrow with nothing. It’s kind of exhilarating, isn’t it?”

I write this now from our new digs in Columbus, and I’ve been thinking about the move for the past few days—how miserable it was, how exhausting, how bruising—and I had every intention of writing a semi-serious screed about just how god-awful relocating all those books was, and how it lead me to pretty much taking back every single positive thing I’d ever said about reading and owning books. But the moment I sat down to work, I found I couldn’t write such a piece. Not because I don’t really loathe my books—though I don’t, of course—nor because I obviously realize how temporary such frustrations are—though I do, I promise—no, I couldn’t write a facetious anti-book essay because what I just went through—brief reunion followed by intense pain—is something necessary to go through. This is the weight my life has amassed. It is mine to carry. But I only become aware of the weight when I move, when, in other words, I’m forced to carry it.

After setting them on fire, Clooney’s character isn’t done with the backpack metaphor. “You have a new backpack,” he tells the crowd. “Only this time, I want you to fill it with people.” He itemizes whom he intends for them to shove into the bag:

Start with casual acquaintances, friends of friends, folks around the office, and then you move into the people that you trust with your most intimate secrets. Your cousins, your aunts, your uncles, your brothers, your sisters, your parents and finally your husband, your wife, your boyfriend or your girlfriend.

The point so far of Bingham’s speech is that, while it is impossible to stuff our couches and cars and homes into a backpack, we can certainly imagine the literal weight of all those things collectively, so when he asks us to pack human beings (another impossible feat) we understand what he means when he says, “Make no mistake—your relationships are the heaviest components in your life.” We don’t, in other words, consider just how much weight we’ve amassed, literally or metaphorically.

Which is why it is so important to occasionally be forced to carry that weight, to measure it in some way, via a move, or a cathartic disposal of too many possessions, or a deep cleaning. Through such processes, we can take inventory of our things, our relationships, the choices we made to wind up with whatever it is we own and to decide how much we really need to keep, and how much can be removed from our lives. It would have been very easy for me to conclude that moving my books took too much of a toll on me and my partner; I could have sold some, donated a lot, and curated gifts for friends out that of massive assortment; I could have thrown them in the trash, if I’d felt like it (and, believe me, a handful of times I really did). No one would have thought me unreasonable, or accused me of being too casual with my things. Indeed, most of my life people have all suggested that I make such a purge.

But I kept each and every one of those heavy bastards. Despite the back-breaking pain, the lack of space, the overwhelming impossibility of reading or rereading them all—they are still with me. Assessing and cataloging my books gave me the chance to reconsider my ownership, to get practical and trim the fat, or to get Zen and disregard the unnecessary—but when it comes to books I am not practical; I am not Zen. I am a ravenous and unreasonable creature, collecting amassing hoarding.

Bingham concludes his speech by encouraging his crowd to drop the bags and live as a shark. “Some animals were meant to carry each other,” he says, “to live symbiotically for a lifetime—star-crossed lovers, monogamous swans. We are not those animals.” Therefore it is in our interest to remain lithe and nimble, to shed as many pounds as often as we can to better push through the chaos of existence. “The slower we move the faster we die,” Bingham says.

Well, if that means that my books with all their weight are slowing me down, pushing me faster toward death, then so be it—this is the business I’ve chosen. Ditching my books might add more years to my life, but losing them would erase any life from my years.