Literature as a Kind of Rorschach Test 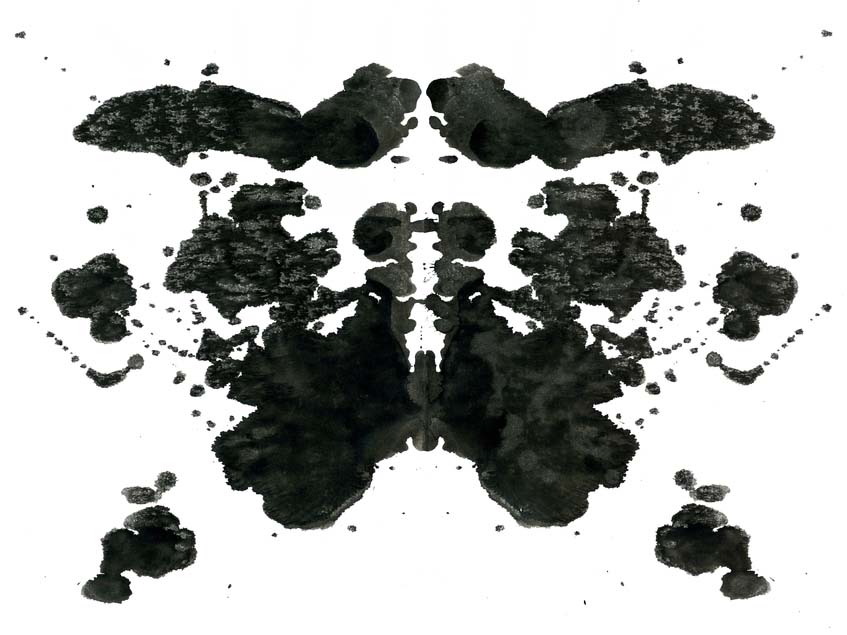 In the 1850s, the German poet and physician Justinus Kerner was forced to retire from medicine due to the onset of blindness. Despite the deterioration of his eyes, Kerner continued to write verse. Occasionally, his poor vision lead to ink falling from his quill and onto blank pages below him. Rather than simply toss them into the bin, Kerner folded the paper in half to create mirrored images with the wet ink, inventing, in the process, klecksography, the art of making inkblots. Though Kerner died in 1862, a volume of his poetry that would be published in 1890 featured many of these inkblots, each accompanied by a poem inspired by the abstract image. He believed the klecks had imaginative power.

In 1921 Hermann Rorschach, a Swiss analyst and artist, developed a 10-set series of inkblots for an evaluative test and wrote about the studies he conducted in order to finalize it in a book called Psychodiagnostik. But Rorschach died a year later, from peritonitis, at the age of 37, never knowing how ubiquitous his diagnostic technique would become, or how widely known his name would be.

The story of Rorschach’s infamous test and the life it took on after its creator’s death is told in Damion Searls’s new book The Inkblots: Hermann Rorschach, His Iconic Test, and the Power of Seeing, and it’s gotten me thinking about the inkblots in a literary way, combining Rorschach’s projective interpretation and Kerner’s inspiration-based poetry—that is, to see what controversial books from the past (and what was written about them) compared to the language used to describe the same or very similar books now. To give literature, in other words, a cultural Rorschach test.

Take, for instance, Gore Vidal’s 1948 novel The City and the Pillar, which was one of the first major American novels to treat its gay protagonist as simply a human being, rather than an opportunity to teach a lesson on morality. For this the novel became quite controversial, leading the New York Times to refuse to review any of Vidal’s subsequent works for the next six years. Twenty years after the publication of The City and the Pillar, Vidal participated in the notorious debate with William F. Buckley on The Firing Line, during which Buckley objected to Vidal’s very presence on the program:

I don’t think it’s right to present Mr. Gore Vidal as a political commentator of any consequence, since he is nothing more than a literary producer of perverted, Hollywood-minded prose.

In 1968 it was still cool for a major public intellectual to pejoratively dismiss Vidal because of the homosexual content of his fiction.

Obviously, now The City and the Pillar is recognized as not only an important step in gay rights but also as one of the best novels of the 20th century. But what’s especially interesting is the reaction to, say, Garth Greenwell’s What Belongs to You, published last year. It was received with zero controversies and almost universal acclaim, even though it also focuses on a young gay protagonist and details his sexual development. The novel was longlisted for the National Book Award and appeared on dozens of “Best of the Year” lists, including the New York Times’.

So while public reaction to a major novel by a young writer about a gay character has shifted from the stupidly sanctimonious and judgmental to acclaim and celebration, the contents of both novels—and what they imply about sexuality—remain sadly similar. Jim, in The City and the Pillar, is perpetually in love with his childhood friend Bob, who doesn’t think that sex between two men is “normal.” Despite Bob’s reservations, Jim remains infatuated with Bob even through his experiences in World War II. At the end of the novel, after Jim discovers that Bob has married but makes a move on him anyway, Bob punches Jim in the face, disgusted at the idea that he (Bob) might be thought of as gay.

In What Belongs to You, the unnamed narrator recalls his own childhood romance, with a boy named K. Shortly after the young boys share an intimate night together, K. tells the narrator that he has a girlfriend, and even has him come over to watch as K. and his girlfriend have sex, ostensibly as a look-out. But the narrator understands the K.’s true motive: “I was not there as guard but as audience. I was there to see how different from me he was.” K.’s punch isn’t literal, but the damage is just as painful.

This is the trouble with cultural Rorschach tests: if we only judge by interpretations of the murky inkblots, we’ll only learn about social mores, propriety, and convention. We must look closer at the ink to see what’s actually going on. Homosexuality may have become more socially acceptable over the last half century, but the struggle for gay people hasn’t lessened at all.

Or how about a book for young readers like Robert Cormier’s The Chocolate War? This novel came out in 1974 and has appeared on banned book lists ever since. What’s so shocking now about The Chocolate War’s reception at the time of its publication is how exactly perfect Cormier’s novel fits into the lessons we teach children today. Jerry Renault is a freshman at Trinity, a Catholic high school, where headmaster Brother Leon and a cabal of students known as The Vigils conspire to sell the most chocolate for their school. When Jerry refuses to participate, the Vigils turn the entire student body against him, culminating in Jerry getting a beat-down in the darkness of the school’s football field. Jerry tells his friend Goober that it’s probably not smart to “disturb the universe,” referencing a line from T.S. Eliot’s “The Love Song of J. Alfred Prufrock.”

Brother Leon and his minions engage in cruelty, bullying, and manipulation, which are three dominant issues in children’s education now. Myriad campaigns have been launched to combat bullying—there was even a series of “It Gets Better” testimonials from gay adults trying to assuage the inner conflicts of still-in-the-closet kids, which while being a wonderfully inspiring message seems also resigned to the fact that bullying will never stop. Jerry’s heroic stance against the cultural norms of Trinity should be—in fact, are—heralded as role-model behavior, as it aptly captures the adage, “What’s popular is not always right, and what’s right is not always popular,” which, when I was in school, was plastered on the walls along with other gems of wisdom like, “It’s not the place where you stand but the direction in which you look.”

The objections to Cormier’s novel involve its subject matter—the very thing which would now make The Chocolate War so vital and relevant. And not just because of school bullying. What, after all, does this remind you of? A newly appointed leader manipulating his inexperienced underlings to achieve immoral and entirely selfish ends? Does this sound at all like our current president? Would contemporary readers have anything to benefit from reading a novel about secret organizations and their machinations against the masses? Absolutely. And the idea that The Chocolate War was ever banned (which occurred as recently as 2008 in Maryland) shows just why we have the current political landscape we do now.

A piece of art doesn’t change. The words in Cormier’s novel—or Vidal’s, or Twain’s, or Rushdie’s—will forever and always be the words he wrote and published in 1974. What changes is us, the reader, and when we do, miraculously, the art changes with us. The Chocolate War was once considered an inappropriate story about children; now it’s a frighteningly relevant work about America. Gore Vidal showed us how tumultuous being a gay man in the 1930s and 40s was; Garth Greenwell reminds us has little has changed. But where The City and the Pillar gained a notorious reputation as “smut,” Greenwell’s What Belongs to You gained acclaim. So while Vidal’s book was too mired in misguided moralism for people to approach it appropriately, we’ve changed enough for Greenwell’s message—and his beautiful art—to get through to us, so that maybe, in another 50 years, the gay protagonist of a novel won’t have to suffer because of society’s simplistic and immoral view of them; whoever writes that book will have to think of new ways to hurt their character.

The purpose of the Rorschach test was to interpret a person’s psychology through the use of abstract images. A cultural Rorschach test is meant to discover how a new generation views the same artifact as previous ones. But the art of the past won’t help us—or provide us with any new insights—unless we change first, so we can see something different in the same image—so that what we before saw as a burned book open at its spine has now become a butterfly.