I Said I Read This Book, But I Lied

A few years back, I bought a one-way ticket to a small Pacific island called Yap, packing only a few t-shirts and the hundred books I was most embarrassed not to have read. The books were the usual suspects: War and Peace, The Bible, and Dave Barry Turns 40.  Since writing my own vaguely humorous book (A Beginner’s Guide to Paradise) about reading all those books, I’ve been asked on occasion, “Did you really read all hundred books?”

“All of them?” a few of the incredulous have asked.

“Well, yeah.  Basically.”  To me, basically, was a kind of hedge, a moat around the truth that few would want to cross. Because to get beyond “basically,” by definition means to get more complex and few people want that. I try not to start sentences with ‘to be honest,’ but to be honest, I didn’t read one book in its entirety: Moby-Dick.  And I may have quickly skimmed a few parts of The Bible.

I know Moby-Dick is a pillar of literature, a pillar supporting the roof of…I don’t know…much easier-to-read literature. And at 208,773 words in length, it’s 40% shorter than The Brothers Karamazov. But still, to me, Moby-Dick feels at least several hundred words too long.

And this is coming from someone who has a high tolerance for plodding. Everyone has a hidden talent, and—not to brag—but I have two: the ability to make turkey sandwiches (including sliced tomato) with only my toes, and extreme patience when it comes to the less-than-zesty. How patient?

When I was a kid, I used to watch televised city council meetings for hours.  Proposed changes to pension plan funding schedules for municipal workers? Tell me more! Street-repair bond packages?  Bring it!  So when I brought Moby-Dick to Yap, I thought; I got this.  It turns out, however, I didn’t have this.

The cliché of Moby-Dick is that it’s a long and tedious whale hunt. And there’s a reason for that. The book is about a long and tedious whale hunt. Never have I so yearned for a whale to die. And I (generally) like whales. But complaining about Moby-Dick being long is like complaining about traffic in Los Angeles: it’s in the brochure so, well, get comfortable. Yet I still wasn’t prepared for passages like this one:

“This phenomenon of whiteness is not confessed to be the prime agent in exaggerating the terror of objects otherwise terrible; nor to the unimaginative mind is there aught of terror in those appearances whose awfulness to another mind almost solely consists in this one phenomenon, especially when exhibited under any form at all approaching to muteness or universality.”

Oh sure, I thought while reading in a weird little motel room in Yap, ought of terror, that would make sense. Even naught of terror works. But aught of terror?  That simply baffled. So I started to skim. In fact, I have no idea whatsoever why, exactly, white is so terrible.

But now, I wonder if part of the genius of Moby-Dick is also its difficulty. After all, the harder something is, the more meaning it usually has. A hike versus a walk, for example. Or making dinner instead of just buying it. If Moby-Dick had come down through the ages as just a few key pages (Moby-Dick: The Readers Digest Edition), no one would read it today. These days, I don’t beat myself up for not finishing Melville’s tome. I only blame myself for chugging a fine wine that should have been sipped…over a lifetime. Or two. 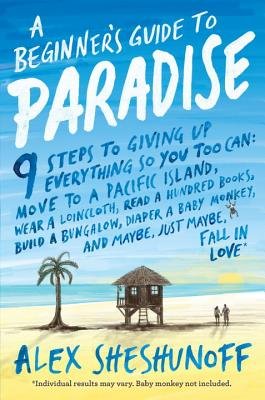 ALEX SHESHUNOFF is a writer-like person whose work has appeared in National Geographic Adventure, Slate.com, Marketplace on National Public Radio, and other very prestigious media outlets. Before deciding to call himself a writer, Alex snuck through Yale and started and ran an Internet company in New York called E-The People—a nonpartisan precursor to Moveon.org that was featured in the New York Times, Forbes, CNN, and elsewhere. Today, Alex and his wife, Sarah, live in Ojai, California, with their two sons, Ian Shenanigan and Andrew Commissioner. His memoir A Beginner’s Guide to Paradise: 9 Steps to Giving Up Everything is on-sale September 1.
[email_signup id="4"]
Great! You've signed up successfully!
We are experiencing an error, please try again.