Harry Potter Fans: Are You Ready For More?

The eighth book, Harry Potter and the Cursed Child, will delight readers all over again and add fuel to the fire of fandom.

Those of us who were around as the Harry Potter books by J. K. Rowling were coming out remember the growing, obsessive fandom that dovetailed with the internet’s evolution. Harry Potter super-love—and the subsequent normalization of fan theories, fiction, and discussions of book series—was closely correlated to the advent of online forums, chat rooms, and sites dedicated to fans. Melissa Anelli, webmistress of The Leaky Cauldron (one of the most respected fan and news sites about all things Harry Potter) wrote about this in Harry, A History: The True Story of a Boy Wizard, His Fans, and Life Inside the Harry Potter Phenomenon. The fandom managed to keep going even after the release of the last book in 2007, since many readers were attached to the movies as well (some, of course, were solely fans of the movies, which we here at RIF don’t really get, because books, but to each their own), and the studios managed to stretch the movies all the way to 2011, when the Harry Potter and the Deathly Hallows: Part 2 came out.

Since then? Since then, there’ve been new obsessions, sure, and new books and movie series to obsess over, but in terms of the HP world, not that much has changed. Many of us have reread the books (or rewatched the movies) dozens of times. LeakyCon, where fans come together to celebrate the wizarding world, still exists (the next one is in October of this year). Universal Studios opened a Harry Potter theme park. There’s been a traveling exhibition. Interactive website Pottermore launched and was recently rebooted, making millions of fans go through major identity crises as they were suddenly sorted into new houses. (This humble author chose to keep her old house, Hufflepuff, and screw the new Sorting House that decided she was a Gryffindor. Ravenclaw? Maybe. She has always called herself a Huffleclaw or a Ravenpuff. But a Gryffindor? No. Just no.) There’s also, of course, been the announcement of a movie about the wizarding world in early 20th century New York City, where apparently many beasts are to be found.

In the last few months, news has been coming out about the newest venture in keeping the Harry Potter world alive for rabid fans. Harry Potter and the Cursed Child, a play being staged in two parts, was officially confirmed as “the eighth story in the Harry Potter series” according to Pottermore, and they shared the synopsis in October, 2015:

It was always difficult being Harry Potter and it isn’t much easier now that he is an overworked employee of the Ministry of Magic, a husband and father of three school-age children.

While Harry grapples with a past that refuses to stay where it belongs, his youngest son Albus must struggle with the weight of a family legacy he never wanted. As past and present fuse ominously, both father and son learn the uncomfortable truth: sometimes, darkness comes from unexpected places.

But for a long time, we also knew—and some of us resented this fact—that the play would be showing in London’s West End, that tickets were sure to be astronomically expensive (this is conjecture, but come on, can you imagine them being affordable?), and there was no news about the show traveling the world. Yes, we found out that the middle-aged Hermione was going to be played by a black actress, which was phenomenal news. And yes, some of us were maybe possibly starting savings funds in the hopes of managing to get a ticket and fly to London and…well. You get the picture.

Here’s the big deal news, though, the news that makes us jump for joy: “now Potter fans across the globe will be able to join Harry, Ron and Hermione on the next stage of their journey.” In other words, this will published in both book and digital formats: 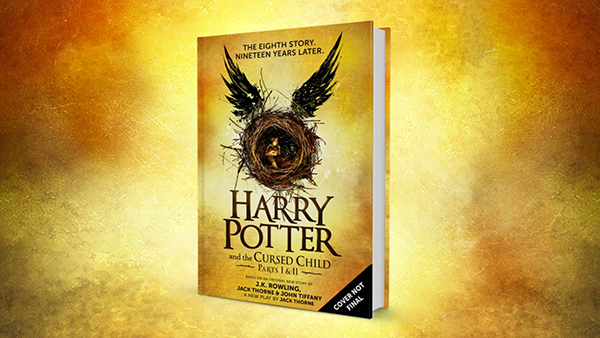 This book matters for several reasons. First, it’s a book, and for those of us for whom the book is the ultimate art form (an objet d’art), it’s a relief to know there will be a less fleeting version of this eighth Harry Potter story. Second, even though the book will contain the play script, there is a Special Edition, so we have to assume there will be more there than only the script. By this point, we’ve come to expect extras to emerge in almost anything new that comes out from J. K. Rowling and Co. Her notes are so copious, and for all we know she continues to write them, that it seems inevitable that we’ll get more info on The Cursed Child in the book, info that even the play-goers will want access to. Third, and most importantly, is the matter of access. People from all over the world love the magical realm that J. K. Rowling has created for us, and we all want a piece of it—but few of us who don’t already live in London or other parts of England and the UK at large, can afford to drop everything and road trip (with planes) to the West End.

So what will happen when this newest of Harry Potter stories comes out? Surely, we’ll get a new spate of fan theories based on the new information we’ll get from the play and the book. There will most likely be new pairings to be shipped for fanfiction, new characters to fall in love, lust, or loathing with. There will be a new generation of Potters and friends to pay attention to and maybe, just maybe, start to obsess over anew.
Will J. K. Rowling keep going? Will she and her business associates continue to release more and more new information about the wizarding world adjacent to our own, maybe part of our own? It seems as likely as people in their twenties still waiting for their letters from Hogwarts to arrive by owl—which is to say, very, very likely.