Going to Paris Armed With A Moveable Feast

How Hemingway's book served as a crucial road map for one writer. 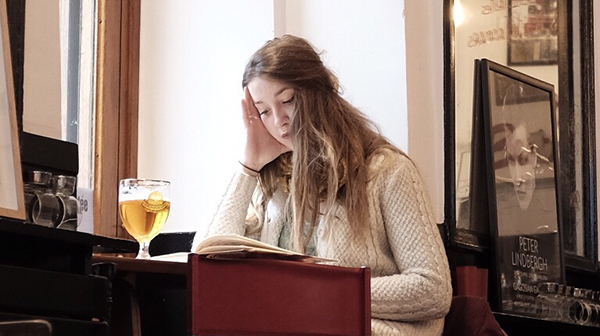 In 2010, I went to Paris for the first time. I was recovering from a broken heart and, having been on a Hemingway and Fitzgerald kick for as long as I could remember (Dad used to read us Hemingway when my sister and I were kids), I decided Paris was where I needed to be. I knew that I didn’t have some novel that would rival The Great Gatsby in me, nor did I have a life of adventure that would make for a collected work of stories à la Ernest Hemingway, but as a writer, I felt it my duty to go to where the expats called home in the 1920s. The only book I brought with me, since I intended on spending the few months writing, was Hemingway’s A Moveable Feast. I had never read it before, but that was the point.

Of all of Hemingway’s works that I had read, loved, obsessed over, practically tearing out my hair wondering why I could never write such prose, I deliberately stayed away from A Moveable Feast. I knew the premise; I knew that within a few pages I’d stumble upon all the greats, living their life of bohemian bliss on the Left Bank; but I also knew I wanted to read it while I was in Paris. The fact that I had not read it, was surprising to everyone I knew, but the way you savor the final bite of a dessert was the way I wanted to experience A Moveable Feast.

I read it the first night I was in Paris, alone in a small flat in le Marais, not far from the stomping ground of the writers I had loved my entire life. From that moment forward, I never left the flat without it. I also remember thinking, as I tucked it into my bag, that I’d never go anywhere without it again. It spoke to me, although I knew then just as much as I know now, that I was not special in that case. A Moveable Feast speaks to a lot of people, writers especially.

My first stop after reading the book and having been in Paris for only two days, was Hemingway’s flat at 74 Rue du Cardinal Lemoine, where he had lived with his wife Hadley from January 1922 to August 1923. I had walked from my place in le Marais, past Notre Dame, over the Seine, across Boulevard Saint-Germain, and then up a hill toward the blue door that, if you didn’t know what you were looking for, you’d likely miss it as the only thing marking it is a small plaque to the left of the door stating the time in which he lived there, his birth and death years and, of course, “Tel était le Paris de notre jeunesse, au temps où nous étions très pauvres et très heureux,” a line from A Moveable Feast which translates to “Such was the Paris of our youth, a time when we were very poor and very happy.” After I put my hand flat against the blue door, as if trying to summon him from beyond the grave, my stomach growled. I had skipped breakfast that morning in a rush to get to the Left Bank. I thought how Hemingway believed that he could absorb the art at museums more when he was hungry. I was hungry, but not hungry enough for the Louvre that day.

But while I didn’t go to a museum that Wednesday, I did go looking for Shakespeare and Company, which, much to my disappointment was not in the same place (12 rue de l’Odéon) where it was back in Hemingway’s day (we can thank the German occupation for that). After some wandering around, I accidentally stumbled across its new location on rue de la Bûcherie. I went inside, but knowing that Hemingway had not stepped in that place, nor had he or any of the rest of the expats had ever borrowed a book from Sylvia Beach in that space, I decided to move on. It began to rain, so I headed home—but with the realization that I’d hit up La Closerie des Lilas in Montparnasse once the rain lifted. I figured if Hemingway and Gatsby had made that their local watering hole, as well as a place to write, then I would do the same.

When I got home, I flipped through the book and reread one of the passages I had underlined:

“I looked at her and she disturbed me and made me very excited. I wished I could put her in the story, or anywhere…”

I knew that feeling of which he wrote; I, too, had stared at strangers, trying to decipher them, all the while wishing I could find a place to immortalize them in words. I decided to go through and reread everything I had underlined that night.

The next couple days it rained. It rained so much that the idea of walking to Lilas, as Hemingway called it, seemed impossible. Instead, after going to the boulangerie across the way, I stayed home and wrote. The flat in which I was staying had no TV, and I found it to be a saving grace. It had an old suitcase from the 1950s as a nightstand, a mattress without a box spring, and the very basics. As the people with whom I had done the apartment swap explained to me, they had just bought it and knew it needed a lot of work. For me, however, hearing the bells of Notre Dame wake me every morning, while falling asleep to the composer next door to me, hard at work on the piano every night, was like something plucked from a novel. I couldn’t have been happier.

When I finally made it to Lilas, it was not what I expected. The clientele was somewhat pompous, clearly devoid of any understanding of what the place represented to the literary community, and I actually found myself scolding a rude American who was belittling a waiter for no reason other than to be cruel. This was not what I had envisioned. I finished my one martini and headed back toward the Seine…with A Moveable Feast still in my bag.

I found myself angry. Not angry at the book for painting something that no longer existed, but angry that things had to change. I was angry that, instead of enjoying a martini, I had to point out to another American that degrading a fellow human being is no way to treat people. I was also a bit angry that I did not fancy myself a boxer in any way shape or form. I imagined Hemingway would have laid that guy out right on the ground in 30 seconds flat. Ah, I thought, when times were different and possibly better. Yes, “better,” I thought again.

For the next couple months, I wandered the streets of Paris without a map. Not a day went by when I didn’t accidentally get lost and I absolutely loved it. At night I’d go home with a baguette and a €2 bottle of wine, and I’d write. I wrote more for pleasure in those months than I had ever in my life. Paris wasn’t just changing me, but inspiring me. It may not have been the same Paris that Hemingway so desperately loved, but it was my Paris now and I was going to love it on my terms.

When I returned to the States, still high from Paris adventure, I got a Hemingway quote tattooed on my forearm: “There is nothing to writing. All you do is sit down at typewriter and bleed.” I wanted to make sure I never forgot how I felt during those months in Paris, in case I never returned (although I would several times and end up marrying a Parisian), so I needed to make the sentiment permanent.

As much as I love my tattoo and always will, I came to realize it wasn’t necessary. Like Hemingway, I had been lucky enough to live in Paris, and because of that, wherever I went for the rest of my life, Paris would stay with me, “for Paris,” as Hemingway wrote, “is a moveable feast.”