The Gap* in Literary Art

*As in, the abstract—not the store. 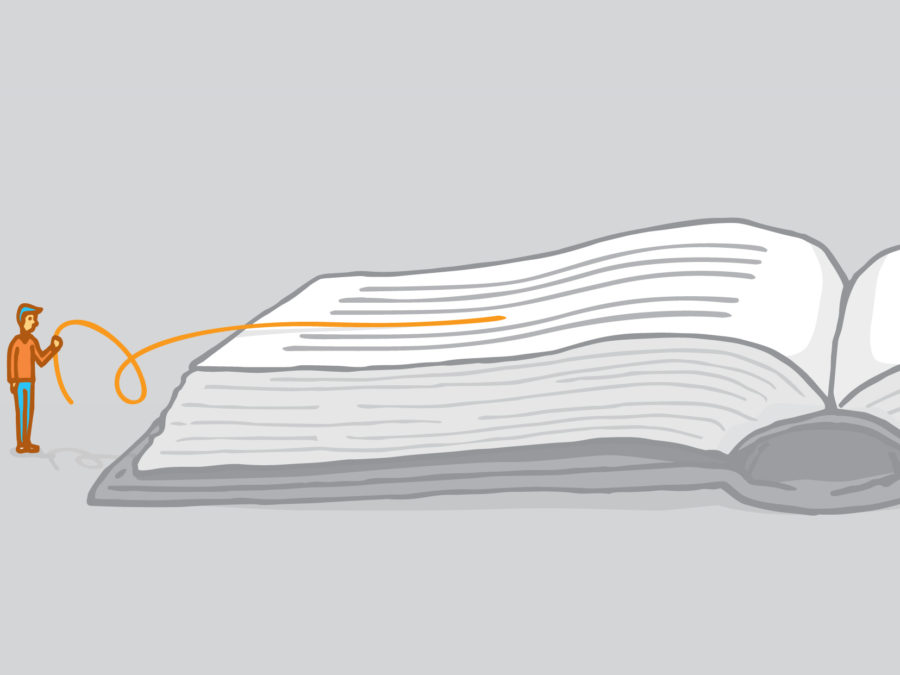 “We were the people who were not in the papers. We lived in the blank whites spaces on the edges of print. It gave us more freedom. We lived in the gaps between stories.”
—Margaret Atwood, The Handmaid’s Tale

“Mind the Gap.”
—a common warning of the London Underground metro

This American Life host Ira Glass, in a widely shared interview from 2009, spoke about a “gap.” “We get into [creative work] because we have good taste,” he said:

You can see why the quote has been shared so much: Glass hits on something universal for artists, yes, but for anyone striving in a difficult field. (David Shiyang Liu made a wonderful “typography” version of the audio, which you can see here.)

The “gap” between one’s earliest creative efforts and the “great” art one is constantly barraged by, though it is not my subject here, does provide an interesting analogy to what I’m about to describe. A novice fiction writer, after reading the novels and stories that made them want to write themselves, are daunted by many seemingly insurmountable obstacles: first and foremost, how to make stories work, which is a big one, as it relates to the cavalcade of literary devices and techniques (e.g., point-of-view control, when to show and when to tell, and when doing either, how to approach the actual showing and telling, sentence-wise—shit—word-wise, as sometimes such infinitesimal aspects can bring the whole damn thing crashing to the ground); secondly, a messy bout of which-stories-do-I-tell, which relates to the third hurdle, what kind of write am I (which is kind of a red herring obstacle, as what novice writers don’t realize is that “what kind of writer you are” comes not from some decision-making process but from the actual texts you end up writing and rewriting and publishing, but in the beginning it sure seems like something you’re already somehow supposed to know, which is utterly petrifying for, say, a 20-year-old from Ohio who’s had sex exactly one time going out into the world like he’s done some shit and has stories to tell, whereas secretly he’s convinced he’s got nothing at all to say and nothing worthwhile to contribute to anything and is basically shitting his pants at the sheer size of the world and how tiny he is and how basically pointless he is in the scheme of things—all of which means the “gap” in his mind between him and the great writers he admired was bigger than the supposed gap between regular people and Shakespeare, because this 20-year-old “writer” doesn’t even consider himself to be like “regular” people, primarily because all the “regular” people he saw in the world at least seemed to have practical things figured out, whereas he was shockingly poor at anything besides writing and skating and reading, things that required long effort and studiousness, yes, but are also chosen activities, privileges, really, not like the short-term chores and bills and forms and pills that actually require the same kind of vigilance, but it’s one that doesn’t progress or develop into anything meaningful, like skill, ability, betterment—which, to be honest, is really just a fancy way of saying the dude was lazy); and the fourth and final obstacle (that I’m talking about; there are oodles more) is Glass’s question: Why is what I’m writing so obviously, apparently, so fundamentally bad when compared to my favorite writers?

The answer to this last question is not—as many young writers believe—that they’re bad writers. It means, rather, that they’ve bought into a narrative about brilliant writing and natural, even inevitable, aptitude. Canonical authors have been ceaselessly mythologized, and just as often de-mythologized, which merely (and ironically) brighten the aura of myth around them—and so, to paraphrase Jewel, we read about them in a book, they say they better than us, and we agree. As Glass said, this is an extremely difficult phase to fight through, involving as it does (or seems to in young minds) a mental battle with historical figures, and a just as violent war with oneself. Who am I to presume to be as worthy as Tolstoy or Woolf or Morrison? Who am I to spend hours and hours everyday trying to reach, if not their exact level, then some contemporary equivalent? In other words, who am I to not just believe I can be as good (or, you know, some comparable level of good) as these titanic writers but am actively pursuing that goal, and surreptitiously too, tucked away in my home, in my chair, alone, no one around to judge my out-sized ambition and, thus, no one to stop me?

As we continue to write and, moreover, continue to read, another gap begins to slowly appear—this time, between the depictions of human moments, brief commentaries or implications of psychology, and how you’ve experienced an actually lived life. It is not that these renowned authors are getting anything wrong, exactly; it’s that you realize that their greatness often lies not in accurately describing life but in convincingly describing it. And this relates back to an earlier issue, namely that of making stories work. You see, when a young writer reads a great novel, it isn’t merely the style or the story that overwhelms the amateur. It is way in which the characters live. A neophyte doesn’t just read this as good and effective writing; it is seen a deeper level of living, so the gung-ho beginner thinks that not only are they unequipped literarily but also sensationally. They don’t think they live their lives as richly and psychologically complex as the fictional characters being described. Their fault, they might come to believe, lies in their essence, their experience, and their shallowness.

This, of course, is not so, and moreover it’s a multi-layered lesson, because it takes a good amount of writing and plenty of living and tons of reading to finally realize that those authors whose characters’ lives seemed so tidily explicable and eloquently wrought were merely convincing their readers that such narrated experience is existable—that is, whether, within the confines of the work itself, a novel or story can take on its own well-trotted reality, where these particular people walk these particular streets and say these particular things and, most importantly, possess these particular interiorities. The best fiction writers are the ones who do this most effortlessly, without your notice at all. Some do so slowly, challengingly, even clumsily, before really allowing a reader to settle into its idiosyncratic rhythms. It is not unlike the phenomenon of theater, where bringing audiences in is much more difficult—because, in part, they’re right there—and much more immediately necessary, for it doesn’t happen quickly, there will be a very awkward air in the room, like a scent no one can name—but if it’s done well, even the more resistant audience members will experience a lovely transition from “Oh this is kind of weird, and why are the actors talking like that?” to, mere minutes later sometimes, being so immersed in the story that you forget they’re actors and that you’re sitting next to a complete stranger in an anachronistic building in an enormous room where nobody is talking except a handful of people pretending to be, like, pirates or some shit. Great fiction works this way, too, albeit in a less precarious manner. To be sure, narrative prose must continually balance on the thin rope of the reader’s attention and participation, but it has more options as to how it goes about holding us in. A theater is a literal space the artwork must, in some sense, fight against, whereas the only theater a novel utilizes is a person’s mind.

And so the point being that there’s still that transition to account for in a novel, a subtle or abrupt slide from actual life to an invented one—and it is this need that leads to the Gap, for writers realize early on that if you simply record life as it is typically lived you’ll end up with some really boring shit. Fiction requires enhancement, refinement, restructuring, revision—a metamorphosis of banality into profundity. And this is true even of sci-fi or fantasy—even more so, in fact, because they’re literally asking you to believe in new worlds, new environments, or new ways of doing things. In translating your perception of your life and others’ lives through the prism of your creativity and your intellect, you inevitably alter some aspects, totally legitimately, and little by little your fiction becomes less a matter of transcription and more one of transposition—like the same tune in a higher key, it’s the same, but slightly different.

At least, in your head. To you, the world you’ve created and depicted is as close as you can get to the real one. It’s not nearly as great as the one in your head, but still, it’s something. But to readers, for readers the difference is not slight. It is, in fact, actually more like a chasm, a rift, or, ahem, a gap. The depiction of life in novels is fundamentally unlike their own—which a young writer interprets (and worries about) as an aesthetic problem (“My biography or my imagination isn’t as rich and varied as those of Great Authors”) when it’s really about something else completely.

This Gap, which can cause so much stress on a beginning scribbler, is not a problem at all, but is in fact the best part of fiction. Creative art has never—and, I repeat, never—been about showing you what you already know or telling you what you already believe. And this Gap that seems to relate to the skills and intelligence of one writer actually relate to the variety of human experience. Each of us sees things in incalculably different ways, and it is this gap, the impossible bridge between our inner selves, that one is feeling in great literature, a sense of just how much there is out there—an endless parade of unexpected people, innumerable emotions manifesting themselves in infinite variations, and the bewildering and interminable intersections between them. Reading, though, doesn’t just show us the vast distances between our experiences and our interpretations, especially when we read as widely and diversely as possible. Like an earthquake, we’re only made aware of these gaps when they start to shift, or, in the case of the best fiction, when the Gap begins, book by book, to close.