Falling for a Frenchman in France

Despite the cliché, one American writer unexpectedly falls in love with a Frenchman in the most romantic city in the world. 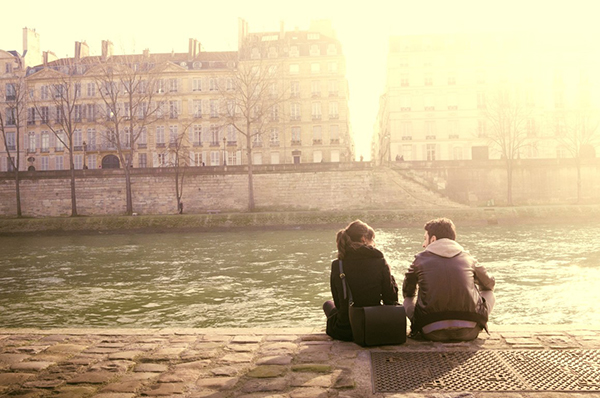 To say that I fell in love in Paris feels almost cliché. Paris is known the world over as the most romantic city on the planet, so to fall in love there makes sense…but it also seems rather predictable. But that’s what happened to me in the spring of 2013. I met a man, a Parisian, in a cabaret in Montmartre, and within a matter of weeks I was in love. Everyone around me was shocked; I’m not the type to fall in love so easily or quickly. I guess Paris does that sort of thing to people, even jaded New Yorkers like me.

Olivier—the man who would become my husband—and I met on a Wednesday. It was March 6. I had been in France since mid-January and it had been an unusually cold winter for Paris. In other words, I hadn’t really gone out much. But in early March, a friend came to visit from New York and I was forced to play both host and tour guide. Despite not having slept in almost 24 hours, my friend, who had arrived in Paris that morning, insisted on going out that night. After taking her up to Sacré-Cœur to see the glow of the city below, we headed to Place du Tertre and made our way to one of those very touristy cafés. We just wanted to drink lots of wine and eat lots of cheese, so any place would do at that moment.

We weren’t at the café long when my friend set her sights on a waiter; a waiter whom she proceeded to flirt with in English while he proceeded to flirt with her in French. As the only one out of the three of us who had any sort of grasp on both languages, I was put in charge of translating this flirtation and the absurdity of it all caught the eye of a man a few tables away. That man was Olivier.

Mildly annoyed by the situation and desperate for help, I asked Olivier, who by this point was laughing at what was going on at our table, to join us. “If you think this is so funny,” I said, “Why don’t you do the translating?” Olivier didn’t need any persuading; he immediately joined us.

A word that perfectly describes Olivier is gentle. He gently sat down next to me, gently offered me a cigarette, and gently took over the translating. I, the New Yorker, am anything but gentle, so his gentleness intrigued me. I also assumed it was fake, but didn’t invest much time in that thought process. I just wanted a translator, nothing more.

But I ended up taking Olivier home that night. And for the next few weeks that followed we became inseparable. I was the one who said, “I love you,” first and he responded ecstatically, telling me that he was in love, too, but too shy to say it. Although by the time I had said it, I had already loved him for weeks. I don’t know if we can blame the wine, the way he looked at me, which was unlike how any man before him had looked at me, or Paris itself, but sometimes I think I fell in love with him that first night, as we sat in bed talking about American and French politics. And, no, that’s not a euphemism for sex—we really did.

Olivier changed me. He brought out parts of me that I didn’t know I had. I know that sounds just as cliché as falling in love in Paris, but it’s true. I’m a rather cold person. When it comes to love and emotions, I hold back. My idea of affection is a pat on the head, as opposed to a hug, and before I met Olivier, you would have never caught me even holding hands in public, let alone locking lips. But with Olivier, I was different. I was kissing that man all over the city, with zero regard to just how many people might see (although PDA in Paris is everywhere; when the French want to show their affection, they don’t wait; they do it right then and there). On one occasion, when he came to meet me for dinner but had been running late, I actually jumped out of my chair, ran across the restaurant, threw myself in his arms, and kissed him; a long, passionate kiss right there in the middle of that restaurant and it didn’t even cross my mind what I had done until I sat back down. I was suddenly less American with my affection, both publicly and behind closed doors, and far more French. I could not get enough of him.

Before I even returned to the States in late April, I already had my plane ticket to return in July, and I wasn’t back in Paris for more than two weeks when Olivier proposed. I didn’t hesitate in my response; I knew that everyone around me would say that we were moving too quickly and that it was going to be complicated in some ways, but I didn’t care. All I knew was that I had to be with this man and I had to be with him forever. And anyone who thought it was a bad idea could go right ahead thinking that; it wasn’t going to change anything.

We legally married in New York City in December 2013 at the City Clerk’s Office and had our ceremony and reception in Paris that following May. It had been decided, by everyone except Olivier and I (although we weren’t against it) that if I were marrying a Parisian, I should have a Parisian wedding. Apparently everyone needed a reason to go to Paris and could somehow justify making the trip if it was for a wedding. However, I’m still not sure why anyone needs a reason to go to Paris.

I wanted to have a very French wedding, more so for the Americans who were flying all the way across the Atlantic to attend, than for anyone else. For a location, we decided on Bois de Boulogne, a park in the 16th arrondissement, or the Paris equivalent to Central Park. We had the ceremony outside, with the Eiffel Tower as a backdrop (because of course), and the officiant was my friend David, whom I had known since high school.

The ceremony was short and sweet—literally—clocking in at under 20 minutes, which is impressive considering it was both in French and English and even included a reading from La Petit Prince. Then we made our way to a chalet (that involved a quick boat ride), where family members and friends from both sides of our families made speeches. My sister cried tears of joy, because she never thought my independent spirit would allow for such a day, and Olivier’s sister told stories about her baby brother and all his adorable quirks.

The sit-down dinner had everything one would hope to have at a French meal, with the highlights being: foie gras (despite my personal aversion to it for ethical reasons), filet mignon, and a traditional French cheese plate for dessert. Making sure no one forgot that they they were in Paris, we opted against a wedding cake and had a tower of Ladurée macarons. We also had a topper of Princess Leia and Han Solo, but I guess that’s less French and more about two Star Wars geeks getting married.

Then we danced. All of us. Even my father and a friend of mine who had flown all the way from New York to Paris on crutches. The champagne and wine flowed until 3AM, and although Olivier and I headed home to prepare for our three-week-long honeymoon in Italy, the majority of the guests took cabs over to the Left Bank and found a club where they could dance some more. I rarely use this word, but it was perfect. Although we had been legally married for a few months, sharing it with our friends and family made it finally seem real.

The first time I went to Paris in 2010, I went to recover from a broken heart. I fell in love with Paris during that visit, and returned to it every spring after that. All the times I wandered those streets, feeling the type of romantic feelings that only come with wandering Parisian streets, it never once crossed my mind that I’d meet the man that I would marry in Paris. I never even daydreamed about it, because Paris was my safe haven, a place faraway from the complications of relationships. But there Olivier was that night, and suddenly I wasn’t just in love with Paris the city, but a born and raised Parisian, too.