Dorie Greenspan on the Do’s and Don’ts of Cheese 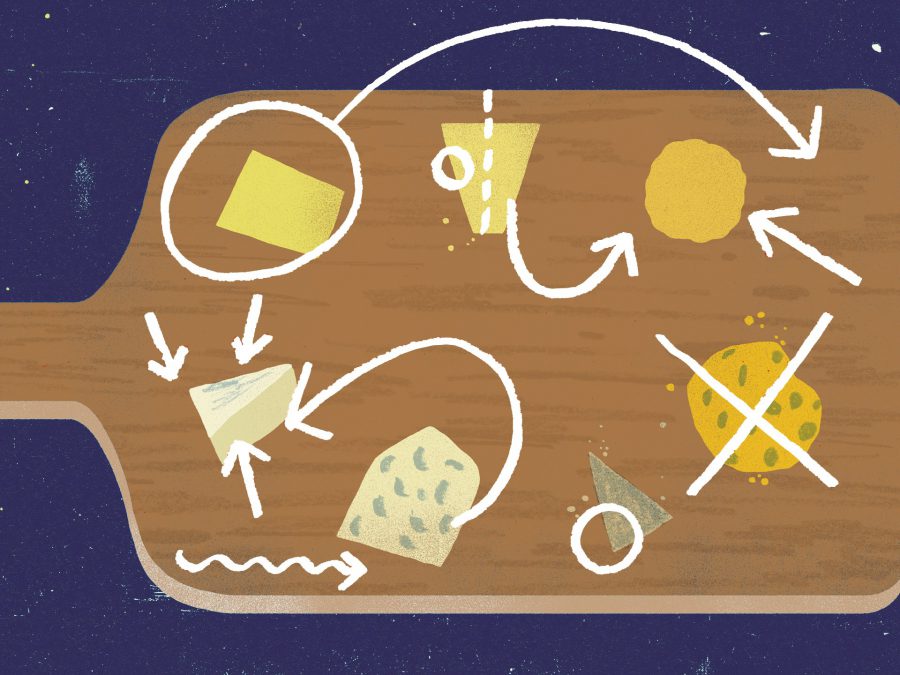 The first time I went to the grand annual agricultural fair held in Paris, I was reminded of Charles de Gaulle’s remark that it was impossible to govern a land with 264 cheeses. My next thought was that the great general vastly underestimated his country’s output of what is often considered milk’s greatest achievement.

Cheese is so important in France that it’s its own course, coming between le plat de résistance (aka the main course) and dessert, or sometimes replacing dessert. Depending on the meal and the occasion, the cheese course might be as simple as one perfect cheese — in the winter, when Mont d’Or, a soft-enough-to-serve-with-a-spoon cheese, is in season, I often serve it by itself. Or the course can be an elaborate spread including goat, cow, and sheep milk cheeses, soft and hard cheeses, mild and strong cheeses, and at least one blue-veined cheese.

With a cheese platter, variety is key, but timing is all — each cheese should be at just the proper stage of ripeness, and of course, all the cheeses should be served at room temperature. If a cheese is too cold, you lose the nuance of its texture, and you won’t get the full measure of its aroma. I love the elegance of a cheese platter, and I also like the rituals that attend it, at least I like them now that I know them. Trust me, it’s easy for a newcomer to get tripped up.

If you’re having cheese in a fine restaurant, you can relax — everything will be taken care of for you. The cheese waiter will wheel over the cart, explain each cheese, ask you what you want, and suggest a cheese or two if, judging from what you’ve chosen, he thinks you’ll like it (or if he thinks you’re missing a genre). As he cuts, he’ll arrange the cheeses around the plate and point out to you the order in which you should eat them. In general, you start with the most delicate cheeses and work your way around the plate until you come to the really strong ones. You almost always start with a soft goat cheese and finish with a blue.

Things get a little more complicated when you’re served a cheese course at someone’s home: This is where you can easily commit the most common and most serious of cheese crimes: slicing the cheese in the wrong direction.

One evening in Paris many years ago, I was having dinner alone at a restaurant that specialized in cheese. After a cheese-centric starter and main, it was time for the traditional cheese course. I chose what I wanted from the cart and checked with the waiter about where I should start my dégustation. No sooner did he point to the 12 o’clock spot on my plate (the usual starting point), than the gentleman at an adjoining table excused himself for interrupting and piped in that he thought the cheese at 3 o’clock really should be the first bite. “Mais non, mais non,” said the woman at the table to my left, insisting that while the 12 o’clock cheese was fine for the opener, the cheese at 7 o’clock was seriously misplaced. After a lot of talk and a little rearranging, I was given permission to eat — and I was also given a taxi ride home by my two new friends.

Things get a little more complicated when you’re served a cheese course at someone’s home or at a bistro where there’s a communal cheese platter and you’re encouraged to serve yourself and pass the platter on to the next table. This is where you can easily commit the most common and most serious of cheese crimes: slicing the cheese in the wrong direction.

Faced with a triangular piece of ripe, runny Brie, you might cut the tip off the cheese and think nothing of it, but your host, while too polite to say anything, may think you were badly brought up or perhaps a little selfish for taking the best part for yourself. (Although, in truth, most French people go easy on us Americans, understanding that cheese is not really in our culture.) The rule of thumb with cheese is to cut it so that the piece that’s left on the platter is more or less the same shape as the original piece — unless the cheese is round, like a Camembert, in which case you cut it like a pie. Keeping the form is easy with a triangle of Brie and harder, but happily a little less important, with certain big wedge-shaped cheeses. When in doubt, smile and ask for help or consult the book a friend gave me: L’Art de Couper le Fromage (The Art of Cutting Cheese), a 64-page book with diagrams rivaling those that appeared in my dreaded elementary geometry text.

When the platter is in front of you, take as much as you want, but plan ahead — taking seconds of cheese is just not done. While it’s a compliment to take more of the main course, taking another serving of cheese is impolite, because the cheese is not something your hosts made themselves.

When you’re the one serving the cheese, you have only to select perfect cheeses, allow them to reach their correct temperature, and serve them with the right accompaniments — which would be bread and wine. The baguette or country bread that you served with dinner is fine, but it’s also nice to serve what the French call a “fantasy” bread, one made with nuts or dried fruits.

When the platter is in front of you, take as much as you want, but plan ahead — taking seconds of cheese is just not done.

As for the wine. . . . It used to be simple and pretty much unquestioned: you had red wine, usually left over from the main course. But times have changed. While red wine is still the most common accompaniment to cheese — and you’ll never hear anyone squawk about it — white wine is becoming the drink of choice for many contemporary diners. Precedents for this are the pairing of goat cheeses from the Loire Valley with white wines from the region, most especially Sancerre; the happy marriage of Roquefort with sweet, syrupy Sauternes; and the match between nutty Comté, made in the Jura, with wines carrying the mountainous region’s appellation. But now you see white wines with all kinds of cheeses. In fact, the sommelier from an haute Paris restaurant told me that he did a cheese-and-wine tasting with the staff and that in 80 percent of the cases, white wine was the winning choice.

I’ve timidly mentioned this to a few of my most old-fashioned French friends, i.e., those who serve red wine with every dish (never changing the wine during the meal), and the response has been consistent: as they poured red wine for cheese, they’ve said, “Perhaps it could be so,” leaving me to believe that things might not change chez them, but that chez moi, as long as I don’t snip the nose off the Brie, I can pour them some white.

“Excerpted with permission from Around My French Table: More than 300 Recipes from My Home to Yours by Dorie Greenspan, Houghton Mifflin Harcourt.”