The Books I Keep Because I Can’t Give Them Away

By Benjamin Samuel • 5 years ago

Any decent book collection houses a variety of species. There may be flocks of paperbacks and herds of hardcovers, a band of coffee table books grazing in the living room, and somewhere out of sight a colony of eBooks swarm. There are first editions and galleys, pulpy re-issues and collectors’ versions. Some are signed, some are out of print. Some have origins in online bookstores, whereas others were bagged at a stoop sale in Park Slope.

The devoted reader knows the provenance and phylum of her collection, and is able to classify them accordingly. But there is a breed of books that confounds me: those books that haunt the shadows, stalking me from apartment to apartment. These are the books I don’t necessarily want or need or never meant to have in the first place. The same books that I haven’t read and probably never will, but for one reason or another I can’t get rid of. Try as I may to cull the herd, there are some books that just won’t be removed from the permanent collection, no matter how frivolous or frayed they may be.

During my last move, I attempted to be ruthless, donating and selling and giving away as many books as I could muster. Reference books were an easy target—I do have the Internet after all. But I’ve often found myself drawn to old, esoteric dictionaries and encyclopedias in some foolhardy attempt to educate myself. And though I have yet to actually open either the English or Foreign version of the Biographical Dictionary of Literature, they both made the cut and are now skulking the back of a double-stacked shelf. Nor have I ever read any of the volumes from the George Brazillier series on Great Religions of Modern Man that I own, but I’ve often attempted to complete the set by finding the missing book on Judaism. It’s a handsome set, and, if I’m being honest, that’s probably the reason I brought it home in the first place, more so than a burning desire to learn the origins of Protestantism. Other hangers-on in this class, however, are more of an attempt at preservation. My withered copy of Unicode, a book I rescued from a flood, is a glossary of terms intended to make telegrams more economical. “Femella,” I’ve learned means “Telegraph health of yourself, am very anxious.” It’s an oddity, a spectacle from a time that already seems very distant. And, who knows, my 1938 edition of The Printers and Publishers Dictionary may some day be seen as proof that the industry itself existed.

My collection also contains an abundance of books that came from my days at school. I won’t count the number of poetry and short story anthologies I’ve kept since college. Most of them were inexpensive editions, used and in bad shape when I bought them, but were carted from one dormitory to the next because owning The Best American Short Stories of the Century and The Norton Anthology of Poetry was proof to visitors that I was English major. Some of these relics are full of notes and so thoroughly underlined the actual legibility of the text is compromised. And there’s a badly abused edition of The Catcher in the Rye, the first copy of it I ever read, that I stole from my high school, predicting that I’d appreciate that act and the artifact when I inevitably grew up into a meek, old phony (who upon writing that he stole the book wondered if he could still get in trouble with the principal for it). 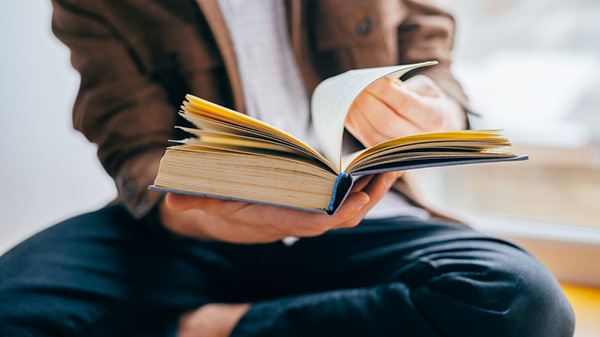 It’s books like that contraband copy of The Catcher in the Rye, books that I’m too sentimental and guilt-ridden to part with, that make up the bulk of my collection. There’s a cheap reprint of The American Boys Handy Book that my grandmother sent to me from England; her last birthday gift to me, which I was already too old for at the time and have feigned appreciation ever since. Or the beautiful Italian translations of Hemingway my sister gave me that I love but literally cannot read.

Those books keep good company with others given to me that are both difficult to keep and difficult to give away. For instance, there’s my favorite edition of my favorite book, Moby-Dick illustrated by Rockwell Kent, and inscribed with a love letter from my ex. Then there are books that I bought for others but never gave to them for one reason or another—either we broke up, lost touch, or I simply wanted to the book for myself. (Or the books I gave to an ex and then took back when we broke up.) Similarly, there are books long ago borrowed from friends or the library that I’m too ashamed to return so late. And then there are the galleys and free copies of books written by friends or acquaintances that I never read, but keep in case they ever come over and look at my bookshelves.

But the books that I know I’ll never part with are the same books my father never did either. There’s The Complete Works of William Shakespeare that my father won at a junior geography contest in 1940, a victory I read about in an old letter to his parents. And there’s a collection of short stories written by his father, which I’ve shamefully never read, mostly because I was told they weren’t very good. And even though we never discussed literature much, I have dozens of my father’s books that I keep simply because they were his, usually indicated by his signature penciled in the flyleaf. Most of them are primers on stuffy English poets, but a few are books I’ve already read and loved, finding myself wistfully wishing we had discussed them.

Those books, like many of my own, will tumble around with me from home to home, reminding me of goals I once had and people I once knew. Until, someday, those books will be somebody else’s problem to deal with—and maybe they’ll hold onto them as a reminder of me and the things I loved, moving them from apartment to apartment as a tangible homage to my memory.

Are there books you can’t bear to part with? Are they some of your favorites or do they hold sentimental value? Let us know in the comments section.

BENJAMIN SAMUEL is the Manager of Community Engagement at the National Book Foundation and Editor-at-Large at Electric Literature, where he co-founded Recommended Reading. He’s a member of the Brooklyn Literary Council, where he serves on the fiction committee for the Brooklyn Book Festival. His writing has been published by McSweeney’s Internet Tendency, Men’s Journal, Flavorwire, Publishers Weekly, and the New York Daily News, as well as in the anthologies A Book of Uncommon Prayer and Paper Dreams: Writers and Editors on the American Literary Magazine. He tweets as @benasam.