This Book Should be Required Reading for Everyone

We Believe You is a must-read. Here's why.

By Lily Herman • 5 years ago 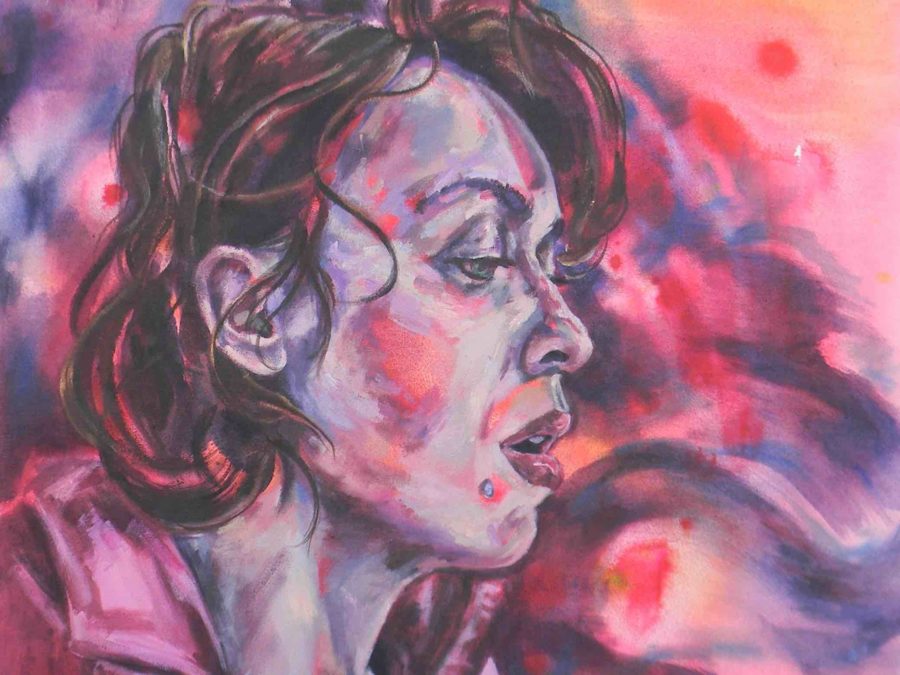 “Believing survivors is a type of radical everyday activism, since we live in a society that suggests that you do completely the opposite.”

When I first picked up Annie E. Clark and Andrea L. Pino’s book We Believe You: Survivors of Campus Sexual Assault Speak Out, I made a mistake. No, my error wasn’t that I decided to read the book in the first place. It was that I decided to read it before bed—and instead of sleeping, I spent the entire night tossing, turning, and sobbing.

I was originally hoping to read the book for an hour, put it down, and head to bed, not to pick it up again until the next night. This is a ritual I practice every evening after a long day of college classes, and even when reading books that I consider highly thought provoking, I’m usually able to jot down some thoughts, compartmentalize, and go to sleep.

But We Believe You was different. You can’t simply put down a book that discusses something so prevalent and traumatic and horrific. And as a college woman, I couldn’t help but think about everything I’ve read, heard, seen, and learned over the past four years when it comes to understanding how sexual assault is talked about and handled by everyone from high-powered college administrators and law enforcement officials to parents and peers.

So instead, I finished the book in a single sitting; I only got up to grab the box of tissues from my living room sometime around one in the morning. When I finally put it down around three, I spent the next four hours barely drifting off until I heard my alarm. I was in a fog for the next 24 hours, unable to really focus on classes or friends or what anyone else was doing. This book left me absolutely unhinged—but thank God it did.

“I ran into him in the lobby. I couldn’t believe I didn’t kill him. I was consumed by rage and a desire to enact violence on him, very depressed, suicidal.”

Reading We Believe You was uncomfortable—and I strongly believe that’s the way it’s supposed to be. If people were to pick up this book and tell me it was “really good” or they “learned a lot” without making any mention of feeling sharp pain or anguish while reading it, I’d tell them that they missed the point entirely and should read it again—but actually pay attention this time. Even if you aren’t a survivor of sexual assault, it’s a book that’s meant to make you feel, to question humanity, and to wonder at the resilience of the human spirit.

But this book is also about facing the intense discomfort and unsettling feeling of knowing that at some point in your life, you were not as compassionate as you should have or could have been. It’s about all the times that you said, “Well, that wouldn’t have happened to her if she wasn’t so drunk” or even just thought that someone might be fabricating his or her sexual assault. I think you’d be lying if you said you’d never thought something problematic, demeaning, or flat-out wrong about a sexual assault survivor over the course of your life. And while changing how we’ve been socialized to act and think is one of the hardest obstacles to overcome, We Believe You is a reminder that it is worth it every single time.

“Being a survivor is being part of a club that no one wants to join. But once you’re in it, you’re in it for life. And it’s the strongest group of people you could ever imagine.”

Annie E. Clark and Andrea L. Pino, the book’s authors, are both survivors of sexual assault. After talking to more students on campus whose sexual assault cases were completely mishandled by the University of North Carolina at Chapel Hill’s administration, the two helped bring a complaint under Title IX against the UNC. Once their case was accepted by the Department of Education and an investigation began, their work caused a ripple effect: Hundreds and then thousands of sexual assault survivors at colleges nationwide began coming forward and bringing complaints of their own. As of March 2016, over 160 colleges and universities in the U.S. are being investigated for their poor (and often abhorrent) handling of campus sexual assault cases.

Since 2013, Clark and Pino launched End Rape On Campus (EROC), an organization dedicated to ending sexual violence on college campuses while also providing support to survivors, education and resources to the general public, and policy reform. The organization has helped file over 32 Title IX complaints and continues to give resources and trainings on sexual assault and prevention around the country. Both women were also primarily featured in The Hunting Ground, a critically acclaimed documentary on campus sexual assault.

From there, they wrote their book and made their message clear in the title: We Believe You.

We’re living in a time when sexual assault is finally being talked about publicly and over a variety of different platforms. The documentary The Hunting Ground, which focuses on sexual assault on college campuses, has had hundreds of screenings over the past several months alone and is now available on Netflix. Lady Gaga made headlines singing her heart-wrenching song “Till It Happens To You” at the Oscars flanked by dozens of sexual assault survivors. Jessica Knoll recently discussed how her rape was the inspiration for her New York Times bestselling book Luckiest Girl Alive.

What I think is most important about these instances, as well as the way We Believe You is written, is that there’s no single narrative or “correct” way to talk about sexual assault. We Believe You has everything: Personal stories, poems, quotes, visual art, glossaries of terms, pages of information for survivors; the list goes on and on. There are a million different ways to think about and read about and discuss the issue of sexual assault and to still have it impact you. The medium doesn’t matter, but the important thing is that you find something that makes you really engage and not just gloss over what’s in front of you. For me, nothing could compare to the horror of reading Brenda Tracy’s graphic account of being gang-raped at Oregon State. Equally impactful was a poem by Kevin Kantor about the feelings when his rapist showed up on the “People You May Know” section of his Facebook feed.

Just as crucial is the fact that this book is for everyone, not just college-aged women or campus administrators or heterosexual individuals. Tragically, we live in a world where sexual assault is prevalent in every community, and when people refuse to engage or simply say that sexual assault “doesn’t apply” to them or “doesn’t happen” where they’re from, that’s where the prejudice and misinformation start.

This book also pushes the boundaries of what we discuss about sexual assault, explaining that not only is every survivor’s story different, but every survivor’s road to healing and feelings towards that trauma are different, too. “Being a survivor is like playing a three-card monte for the rest of your life,” says writer Johanna Evans about her sexual assault. “You think you’ve figured out how to recover, but you’ve been following the wrong card. Another piece of the experience resurfaces and unravels your sense of self.”

By not putting what a rapist “looks like” or what recovery “looks like” in a box, we’re able to create an open, helpful, and realistic dialogue.

“There’s nothing more powerful than truly being and loving yourself.”

Regardless of your age, your place in life, your gender, or any other identifying factor, you need to read We Believe You. But don’t just skim it. Read it slowly and carefully and purposefully. Take time to let it make you feel. And most importantly, don’t shy away from anything that gives you pain or guilt or anger. Yes, it’s hard to know what something feels like until it happens to you. But empathy doesn’t necessarily need to be built on experiencing something for yourself. Compassion is about listening—really listening. It’s about taking the time to picture how terrifying and traumatic someone else’s experience must have been. But it’s also about admitting your own wrongdoings, questioning your own beliefs, and owning up to your words and actions.

This book is a crucial reminder that we’ve all had problematic thoughts at some point in our lives—but instead of pretending they don’t exist if they’re not said out loud, we need to lean into them and ask why we believe what we do. And even if you’re not a college student or a campus administrator, it’s important to challenge our own notions of what sexual assault “looks” like or how the “ideal” survivor is supposed to act. I know I’m personally still reflecting on the stories within We Believe You, continuing to think back to how I handled certain situations and conversations and what I could have done better. And while I can’t go back and edit the past, I can make a serious, active commitment to not just try harder but also do more in the future.

Hopefully this book makes you want to act a little braver, be a little bolder, and show a lot more compassion.

But above all else, hopefully it reminds you that there are people out there who believe you. 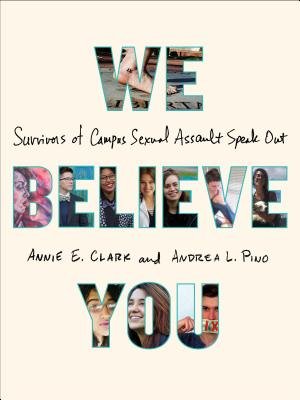 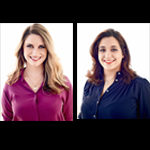 ANNIE E. CLARK and ANDREA L. PINO are co-founders of End Rape On Campus, an organization dedicated to survivor support, education and policy reform. They attended The University of North Carolina at Chapel Hill, where they both majored in Political Science. They were two of those who filed Title IX and Clery complaints against UNC. Their stories are prominently featured in the documentary The Hunting Ground, which premiered at the 2015 Sundance Film Festival. We Believe You is their first book.

Lily Herman is a New York-based writer, editor, and social media manager whose recent bylines include Fast Company, Forbes, Cosmopolitan, Newsweek, Elle, Teen Vogue, and TIME. You can check out her personal website and find her perpetually on Twitter.