7 Things I’ve Done in a Bookstore (Besides Buying Books)

Speed-dating, accessorizing, and other bookstore adventures that have nothing to do with books. 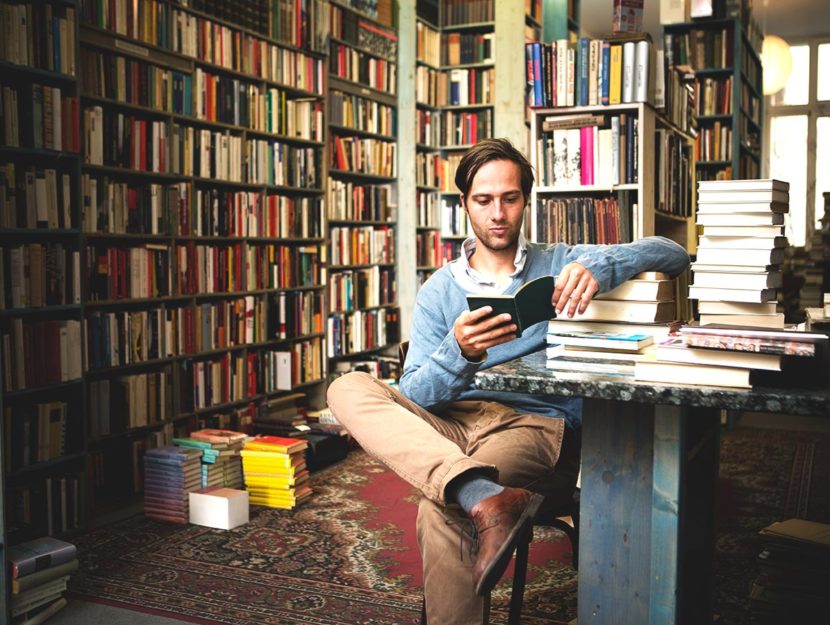 I’ll admit to hoping—even kinda sorta searching—for a meet-cute in a bookstore. I know it’s a cliché notion and common rom-com trope, and maybe that makes the fantasy cheesy…or likelier to happen?

As an optimist, a romantic, and a reader, I’ve spent a little extra time lingering in my favorite sections, in the off-chance a star-crossed Best American Essays fan meanders through. I’ve even sent a longing gaze—like Cupid’s arrow—toward a salesperson as she files books on a high shelf, her step-ladder a convenient metaphor for the figurative pedestal on which I’ve placed her.

It’s never played out how I—or how When Harry Met Sally—imagine it, but there’s a consolation prize: I always leave with a good read, even if I was really shopping for love. Turns out a bookstore offers tons of adventures and activities that have nothing to do with books. Here are seven of them you might try for yourself.

For those looking to manufacture the aforementioned bookstore meet-cute, this type of event is for you. The invitation described “A night of speed-dating for those who’d rather be judged by their book cover” and asked us to “bring a book to break the ice and meet other readers.” I arrived at New York City’s Housing Works Bookstore Cafe feeling hopeful and toting Bill Bryson’s The Life and Times of the Thunderbolt Kid. I didn’t make any serious connections, which was kind of disappointing. Then again, the women there were probably disappointed too, especially if they were expecting a real-life incarnation of Hot Dudes Reading.

The Strand’s book selection is nearly matched by its smorgasbord of literary and political accessories: magnets and shirts and pencil pouches featuring Ruth Bader Ginsberg, Michelle Obama, and sayings like, “A well-read woman is a dangerous creature.” My favorite is the tote-boasting John Waters’s iconic dating advice: “If you go home with somebody & they don’t have books, don’t fuck ’em.” I always eye that tote, consider buying it, and then opt for a floral one with the Strand logo that seems to say, “I like flowers! And I’m literate!” Then I fill my home bookshelf to capacity, just in case.

On a Tuesday around 12:30 p.m., during a midday hideaway from the office, you might find me in what I call the “secret” Strand, a little bookstore nested like a Russian doll inside the Putnam & Putnam flower shop inside the Toby’s Estate Coffee inside the Club Monaco flagship store on Fifth Avenue in Manhattan. If the main Strand (12th and Broadway) boasts “18 miles of books,” this speakeasy of a branch offers about a 100 meters worth—a mere dash.

Many weekend afternoons before I moved to Brooklyn, I’d venture over to the borough and the original Powerhouse Arena. In most Manhattan bookstores, sitting down makes you an inconvenience or a fire hazard, but at Powerhouse, I’d settle on the Arena’s amphitheater-style stone steps, which were big and smooth and surprisingly un-cold and reliably unoccupied. Those steps served as a scenic vista where I’d gaze outward and survey the landscape, or gaze inward and percolate with ideas, or read Between the World and Me until I got kicked out at closing time.

The Arena recently closed and reopened around the corner, in a still lovely but smaller and decidedly shadier location, nestled in the shadow of the Brooklyn Bridge. The new Powerhouse might not be quite the “glorious whirlwind of captivating spectacle” as its website described the original, but it’s still glorious, still spectacular. The first time I visited the new space, the sky opened up, thunder crashed, and rain bombarded the windows and streets. We were trapped inside, and that was totally fine by me.

I was going to visit my friend Micah overseas and sought a gift that was lightweight, flat, and functional. My mom had the solution: a calendar. I browsed the bookstore and came to an impasse: Micah loves both SNL and Hamilton—which calendar to choose? Again, Mom saved the day: both! Now Micah is always accompanied in her office by the smiling mugs of two of her faves. Good morning, Bobby Moynihan! Hi, Daveed Diggs!

One time I was transfixed by a butterfly that had mysteriously found its way into the basement of McNally Jackson Books in SoHo. The pitiful thing was struggling; unable to elevate, it could only leap about a foot above the floor before finding itself grounded. I watched as it hopped desperately around the stacks, then toward me, and then directly onto my left shoe where it sat, exhausted. After a few submitted moments, the butterfly, in a miraculous display of spirit and strength, fluttered upwards—six, seven feet into the air—flapped its wings triumphantly, circumnavigated the entire sports section, and landed again, this time on my right shoe. The butterfly sat there for an entire minute, totally still. Then it hopped onto the floor, and we went our separate ways.