Start Reading The Cake House, An Urban Reinvention of a Shakespearean Tale

Latifah Salom's The Cake House has been called "a brand-new twist on a classic story." What's your favorite book that re-tells an older story? Let's chat in the comments!

“The Cake House is a gem of a novel: a mystery wrapped in a cloak of family dysfunction with subtle Shakespearean trim. . . . Rosaura is a heroine with spunk and a vulnerability so endearing I missed her the second I closed the book. Salom has written a dazzling coming-of-age tale that will resonate long after you reach the end.”

—Elizabeth Flock, New York Times bestselling author of Me & Emma and What Happened To My Sister

Rosaura Douglas’s father shot himself after her mother left him . . . or at least that’s the story everyone is telling. Now her mother has remarried and Rosie is trapped in “The Cake House,” a garish pink edifice in the hills of Los Angeles that’s a far cry from the cramped apartment where she grew up. It’s also the house where her father died—a fact that everyone else who lives there, including her mother, Dahlia, and her mysteriously wealthy stepfather, Claude, want to forget.

I met Claude and Alex the day my father died.

The stranger whose name was Claude held my mother by her arms while she screamed. He stood with blood splattered across his face and over his clothing, and she slid through his hands like a child who didn’t want to go to bed, didn’t want to take her medicine.

My father lay twisted, a gun at his feet. One side of his head spilled red onto the sodden carpet, his blood spreading inch by inch in a widening circle. I fell to my knees and crawled towards him.

Claude shouted, “Get her out of here,” and a pair of hands grabbed my waist and hauled me from the room, dragging me to the other end of the house where sliding glass doors led to a garden with the silhouette of a fountain. I screamed, screamed until I started choking. Someone shook me, hard: the tall teenager with pale hair, paler than I had ever seen. In my neighborhood he would have been called güerito for that hair.

I’d only just met him. He was Claude’s son, and was instructed to wait with me by the car when my mother had gone inside with Claude to talk. He had been silent and moody. Unnerved, I leaned against my mother’s car, staring at the house until my father’s car tore up the hill, coming to jerky stop inches from the old Honda that my mother drove.

I tried to grab his arm, but he pushed me aside, banging on the front door until it opened enough for him to shove his way in. When I tried to follow, the boy caught me and wouldn’t let go, not until the gunshot rang out.

Now, he held me again, my back against his chest, his breath in my ear, chanting over and over again. “I swear I didn’t know he would do that,” he said. “I swear it. I didn’t know.”

The boy turned but still held me close. His voice vibrated against my back. “I don’t think I should leave her.”

Alex. His name was Alex, and something concrete to hold on to. I concentrated on the beating of his heart. In the distance, sirens wailed.

Claude scrambled into my view, blood sprayed across half his face like a bad sunburn. “The police are going to be here any second. I need your help,” he said to Alex. “How is she?”

I started to scream again. Claude covered his ears until Alex clamped his hand over my mouth and sat me down on the couch. The sirens hurtled closer.

My mother stepped into view. She had wrapped a blanket over her shoulders to hide the blood staining her left sleeve and down the front of her ruffled sundress. Her hair, usually sprayed into buoyant waves, hung limp. She tried to light a cigarette but her hand shook. Claude lit one for her.

“Rosaura,” she said, her voice raspy. She wiped at the blood on her cheek, leaving a smudge of orange rust. “Some men are coming here to talk to us, about what happened.”

“What happened,” I repeated. My throat hurt from screaming.

“Yes. They shouldn’t need to speak with you. But if they do—”

She blinked. The sirens blared, and Claude said there was no time. My mother squeezed my face between her two hands, the cigarette hot near my cheek. “Listen to me.”

My mother shook her head. “There’s no time for this. Do you hear me? If the police talk to you, you have to tell them you don’t know anything.”

I scrunched my eyes closed, tried to push her away. The sirens died. There was a knock on the door and loud voices.

“Promise me.” She grabbed my shoulders, shook me hard. “Say it. You don’t know what happened. You didn’t see. Rosaura, you do as I say, tell them you don’t know anything. Tell them, or else, or I don’t know what will happen. Do you understand?”

“I don’t know what happened,” I said, and she relaxed her grip, falling onto the couch next to me, rocking back and forth. My promise not to say anything hadn’t helped.

There was noise and commotion at the front of the house. Two officers in tan uniforms entered with Claude and Alex close behind. “She’s been through a lot,” said Claude. “We’d appreciate it if you kept her out of this.”

I didn’t move from my spot on the edge of the couch. Outside, the day grew dark and then it was night. I stared through the sliding doors. The wind tossed the trees around, bending their tops this way and that. But if I refocused my eyes, the garden disappeared and I saw the rest of the room’s reflection in the glass, could see my mother sitting in one of the dining room chairs, pale-faced and wrapped in her blanket as she spoke with one of the officers and described how my father had the gun hidden in his sweatshirt front pocket, how he’d pointed the gun at her and at Claude before pointing it at himself.

A man knelt in front of me, changing the focus once again.

“My name’s Deputy Mike Nuñez,” said the officer. “Are you all right?”

Deputy Mike Nuñez had dark eyes and skin a shade of brown that reminded me of my father’s favorite sweatshirt, the ragged one that he always liked to wear.

“I wasn’t in the house. I didn’t see anything,” I whispered.

He tilted his head. “That’s all right. Do you live here?”

It was the last day of school. I had been hanging out with Jose and Sofie on the steps to Sofie’s apartment building talking about what our plans were for the summer when my mother’s car screeched to a halt in front of us. She demanded I get in, that there wasn’t any time to explain. Our clothes were in garbage bags and boxes spilled over the back seat. It wasn’t until we sped down the freeway that I understood: we were running away. But I knew my father would follow us. And he had, all the way to this house, and into the front room where his body lay.

“I wasn’t in the house, I didn’t see anything,” I repeated.

“Can you tell me who does live here?”

Claude and my mother continued speaking to the officer who was jotting notes on the pad in his hand. The blanket around her shoulders slipped each time a camera flash lit up the front room.

Alex was standing back from the activity, near the stairs leading up to the second floor. He met my eyes.

“Are they friends of yours?” asked the officer.

“Please leave her alone,” said my mother, stepping between us. “She doesn’t know anything.”

Deputy Mike stood up. “I was just making sure she was okay.”

As they talked, their faces came in and out of focus. Behind them, two men placed my father’s sheet-covered body on a gurney. My mother stopped talking and watched the body be wheeled out, forcing Deputy Mike to look up from his pad. I watched as well through the reflection on the glass doors, like it was a scene from a television show. Once the front door was shut again, the spell broke, and movement returned to the room. In the reflection, I saw my father step into focus, framed by doorway, as if his body hadn’t just left the house.

His eyes met mine across the chaos.

That was the first time I saw the ghost.

After the police left, my mother said I should go upstairs, away from the scene in the front room but I wouldn’t move. I wouldn’t move until she brought me a glass of water, gave me a pill, and had me lie down on the couch. I stared at the cluttered walls full of paintings and bookshelves and shadows until my eyes closed.

When I woke, Alex was shaking my shoulder. “Come with me,” he said. “I’ll show you to your room.”

My room was miles away in our apartment. “Mom?” I called.

“She’s sleeping,” he said, and held out a hand.

Groggy, I let him lead me up the stairs to the second floor. He pushed in a door on the left, revealing a room that was empty except for a twin bed against the back wall. Compared to my room at home, which only fit a twin mattress and a set of dresser drawers, it was cavernous. But my room had pictures of Madonna and River Phoenix that I’d cut out of magazines, and my stickers of Garbage Pail Kids stuck to the baseboards. It was home. This new room wasn’t home.

“There are sheets and stuff here,” said Alex, pointing to a folded floral blanket and pillow that were neatly stacked on the bed.

Yellow curtains billowed in the breeze. It was still night outside. My father’s reflection flashed in the windowpan.

Congrats to Rebecca B., David G., Melissa L., Rita S., Carol W., and 20 other members of the Read It Forward community! Their entries were selected at random to win an Advance Reader’s Copy of The Cake House by Latifah Salom. 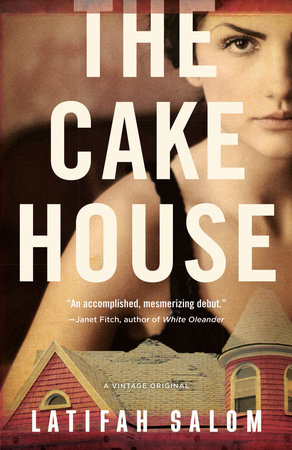 Buy The Book
LATIFAH SALOM was born in Hollywood, California to parents of Peruvian and Mexican descent. As a teenager she attended the Los Angeles County High School for the Arts, and she holds degrees from Emerson College, Hunter College, and from the University of Southern California’s Masters of Professional Writing program. She currently lives in Los Angeles.