Romance in France vs. America

By Denise Lurton-Moulle • 5 years ago 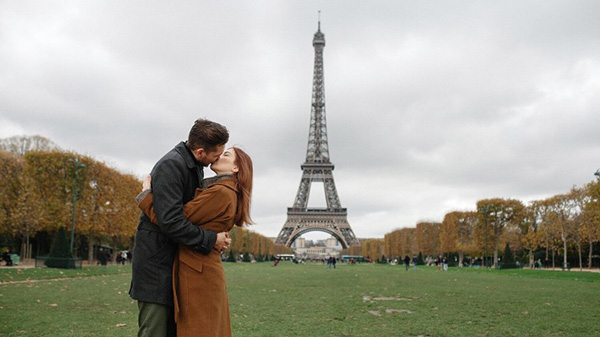 Denise Lurton-Moullé was born and raised in France, but in 1980, met her husband Jean-Pierre (former executive chef at Chez Panisse) on a street corner in Berkeley, California. Here, she ponders about the differences in flirting styles of men and women in her home country of France, and in her adopted country of America.

Many things differ in the U.S. and France, including the romantic behavior of men and women.

From an early age, French men are conditioned to flirt. For them, it is a way to feel accepted and noticed, like the rooster in the chicken coop, crowing just to show he is there. French men have a boyish attitude of making noise and wanting attention. French women are used to this and don’t pay much attention to men flirting with them.

Many French men flirt simply out of habit, appreciating women of any age and any look. I remember being at a local farmer’s market in Paris and the shopkeeper called out to a very old woman, “Chérie! You look so good today.” It was wonderful to hear and I know it made the woman’s day. It was done with great sincerity and appreciation.

However, when French men arrive in the U.S. and behave that way, American women take them a bit more seriously. They are intrigued; perhaps they think this monsieur is interested in a fling. I have watched French men be taken aback when they realize what the woman they are harmlessly flirting with may be thinking.

Most of these men are, obviously, not ready for acting out the flirtation, though some do act on it. They are so used to being pushed away by French women that they are surprised by American women’s readiness and enjoy it for a while, though they may miss the game of push and pull they find in their home country.

French women are supposed to be flirtatious to a certain point, though as with French men, it does not always mean anything sexual. If an American man thought it was a gesture towards him, he might be very disappointed.

American men are more direct than their French, Italian and Spanish counterparts, which is refreshing in a way. They don’t go through circumvolutions to arrive where they want and you know what to expect. American women are also more straightforward than French women. They state their needs in a clearer way.

Both countries have great strengths and it can’t be said that one is better than the other. It is like comparing apples and oranges. They are both good and different. They satisfy different needs.  I am now an American citizen. I enjoy the directness found in this country. Perhaps the different attitudes in flirtatious behavior can be traced back to deeply rooted cultural differences.

Growing up in France, boys and girls are not as gender aware as they are in the U.S. There are no comments like, “Is he your boyfriend?” Instead, there is, “Is he your friend?” Boys and girls play together and are not separated by gender. They can be very close friends without any romantic involvement. It continues in life. Men and women can be very close but never involved sexually.

As a teenager in France, it is rare that one’s parents know if they have a boyfriend or girlfriend. This bit of denial encourages the teenagers to be less serious about their relationships. In the teenage years, young people in France are not coupled up as they are in America. There is no pressure to have a mate. This leads to a lot of friendship between men and women without involving sex. They may flirt with one another, but both sides know that it is only to have fun and flatter each other. They both know that it will not lead anywhere.

It is something quite difficult for Americans to understand. In America, sexuality means looking to be coupled and exploring physical involvement. There are, of course, exceptions in both countries to what I am saying and we could find examples showing contrasting points. But, in general, the sexual approach is very different in the two countries and it is explained by the education and the social rules of each country.

French men in the U.S. can be bored by the lack of flirting or the lack of a nuanced understanding of the game they are used to playing. American men can be overwhelmed and misunderstand the way French women behave towards them. It is two different sets of rules and social conditionings. Perhaps, the way young people are now conditioned by movies, TV, and the ever-present Internet will lead to fewer differences between our countries. We shall see.

Jean-Pierre and Denise Moullé met on a street corner in Berkeley, California, in 1980; six months later they were married. French Roots is the story of their lives told through the food they cook—beginning with the dishes of old-world France, the couple’s birthplace, and focusing on the simple, pared-down preparations of French food common in the postwar period. The story then travels to the San Francisco Bay Area in the 1970s, where Jean-Pierre was appointed executive chef at Chez Panisse when California cuisine was just emerging as a distinctive and important style, and where Denise began importing French wine. Finally, the journey follows the couple to their homes in Sonoma, California, and Bordeaux to revisit the classic dishes of the Moullés’ native country and hone the forgotten skills of foraging, hunting, and preserving. French Roots is much more than a cookbook—it’s a guide to living the good life. 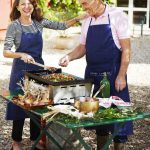 DENISE LURTON-MOULLÉ is the co-owner of Two Bordelais, which offers food, wine and cooking classes in Healdsburg, CA & Bordeaux, France. She and her husband Jean-Pierre Moullé, longtime Chez Panisse executive chef, are the co-authors of French Roots: Two Cooks, Two Countries, and the Beautiful Food along the Way, a narratively rich cookbook of French and Californian recipes.