7 Reasons Why Reading as a Kid Was the Best 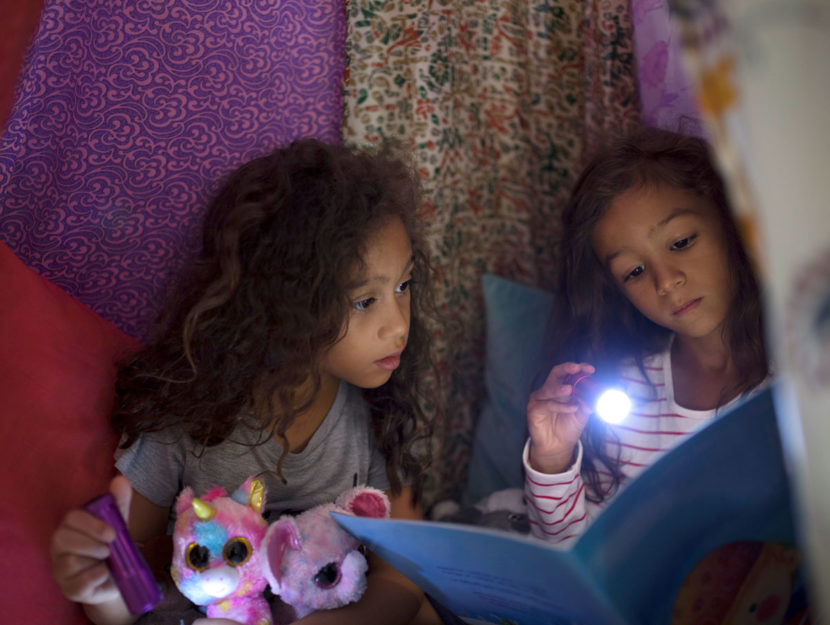 I remember receiving my first library card: the power, the autonomy, the currency it granted—the exhilaration as the red light of the checkout scanner christened the book—my book. I remember, too, watching my favorite titles become movies. The magic of Matilda was brought to life onscreen and I realized that, given the choice, I prefer the book—and, even better, that I’d never have to choose.

My early reading experience was rife with privilege: I was fortunate to have parents and teachers and libraries and resources that made books accessible and cultivated a love of reading. I recently found out my little sister was even luckier than that: “When I was a kid, Mom used to read Harry Potter to me while I was on the toilet,” she told me.

For me, childhood reading wasn’t that good, but it was still the best. Here are seven reasons why.

Thanks to full-body gesticulations, a repertoire of accents and voices, and a Patrick Ewing-volume of sweat, Mr. King’s read-alouds were performative and riveting, borderline Tony-worthy. If ever he sensed our collective focus wandering, Mr. King would keep his eyes peeled on the page, but instead of reading the text, improvise fantastical and preposterous and often gruesome scenes until we realized what was up.

“Oh. I guess not,” he would calmly acknowledge. Then he’d wipe his brow, flip back three pages, and restart the (actual) story where he’d left off.

When I visit, I don’t treat my niece to bathroom read-alouds, but bedtime reading sessions are a given. She insists on the same few books on repeat for months, until the point of memorization; if she can’t read them, she can definitely recite them.

When I was a kid, there was something beautiful in the predictability of my go-to bedtime books; the foregone conclusions of these stories insulated me with comfort, same as my dad’s cologne or the warmth of my covers or my dog, breathing softly, holding furry sway over the southeast corner of my bed.

I knew my day would end with Officer Buckle and Gloria or Mike Mulligan and his steam shovel—and I knew how their stories would end, too. For an anxious kid like me, these guaranteed narratives—theirs, mine—provided some nightly closure, a message that everything would be OK for them and, in these moments, for me.

I never had the endurance, the attention span, or the deep, insatiable passion for a single, seemingly endless series of books. But my friend Julian did: “I don’t know if you guys remember the greatest YA sci-fi coming-of-age 52-book epic of our time, but I sure do,” he recently said onstage. “I had this obsession and this fear with the book series Animorphs.”

Julian’s complicated and powerful relationship with the series started at a young age and has continued throughout his life. He planned to read the entire series, but his parents actually made him stop—for years he slept, terrified, with one ear closed under the pillow “because the yeerks go in the ear” (a reference Animorphs fans will understand). Then Julian grew up to be a standup comedian, which gave him a platform to write and perform an original song that combines heartbreak with Animorphs fan fiction.

Five years my elder, my sister could’ve done a better job corrupting me—or at least, as so many older siblings did, introducing me to salacious content at way-too-young of an age. Even if she had, I probably would have been too prudish to really enjoy it anyway.

Outside the confines of minute-by-minute lesson plans, linear tables and desks, single-file lines, and when-the-hand-goes-up-the-mouth-goes-shut, we were granted space and time to sprawl out—without pressure or shoes—in these kids-only microcosms whose topography of stools and carpet and beanbags provided tiny bastions of escape into books and our imaginations. According to some scholars, these reading nooks provided freedom from routine and curriculum, and also freedom from adults.

“Secret spaces serve as mirrors in which children can explore themselves and play with identities, while at the same time they act as windows to the real world through which children develop an understanding of social interactions and societal norms and expectations,” suggests “Imaginary ‘Geographies’ of Childhood: School Library Media Centers as Secret Spaces,” which is easily the coolest name of a scholarly article, ever. “Children need small spaces, nooks and crannies, and areas not in the direct sightlines of adults if they are to feel sheltered enough to imagine freely.”

Growing up Jewish, I never envied my gentile friends, but it’s inarguable that media and culture surrounding Christmas is infinitely superior to what Hanukkah has to offer. It’s basically pitting a single Adam Sandler song (“The Hanukkah Song”) against entire albums from Destiny’s Child or the Jackson Five, and a single Adam Sandler movie (Eight Crazy Nights) against Elf and Home Alone and Die Hard. The Maccabees put up a good fight, but the modern-day battle of winter holiday music and movies is a blowout.

When it came to kid lit, however, Hanukkah books offer a near miracle. The timeless and riveting Hershel and the Hanukkah Goblins, winner of a 1990 Caldecott Honor, combined Jewish folklore and action-and-adventure with the Festival of Lights. My personal favorite, Elijah’s Angel: A Story of Chanukah and Christmas, a National Jewish Book Award recipient in 1993, is, according to American Bookseller, “A strikingly illustrated story that tenderly bridges the boundaries of age, race, and religion.”

In your face, Jingle All the Way.

I never made a wish list for Hanukkah or for my birthday, but when the annual book catalog arrived, I turned into Veruca from Charlie and the Chocolate Factory: “Daddy, I want an Eric Carle book NOW!” I’d scour the catalog, circling and highlighting and marking and imagining the day my elementary school library would transform into the book fair. After what felt like an eternity, it did.

I’d step into the library and, simultaneously, the uncanny sensation of a dream: I know I’ve been here before, but it’s just…different. It was a dizzying spectacle, a whirlwind: the temporary shelves soared up to the ceiling; the books I’d selected on paper had, as if by magic, materialized in the flesh, the gold of their freshly awarded Caldecott and Newberry medals boasting excellence, glistening under the fluorescent lights, summoning us like sirens into new books, each a portal into some undiscovered, infinite elsewhere.

Want to ensure all kids have an amazing reading experience? Get involved with these great literacy organizations: First Book, Reach Out and Read, Eye to Eye, and Everybody Wins!