As we revisit The Little Mermaid for the millionth time, certain nagging questions arise. 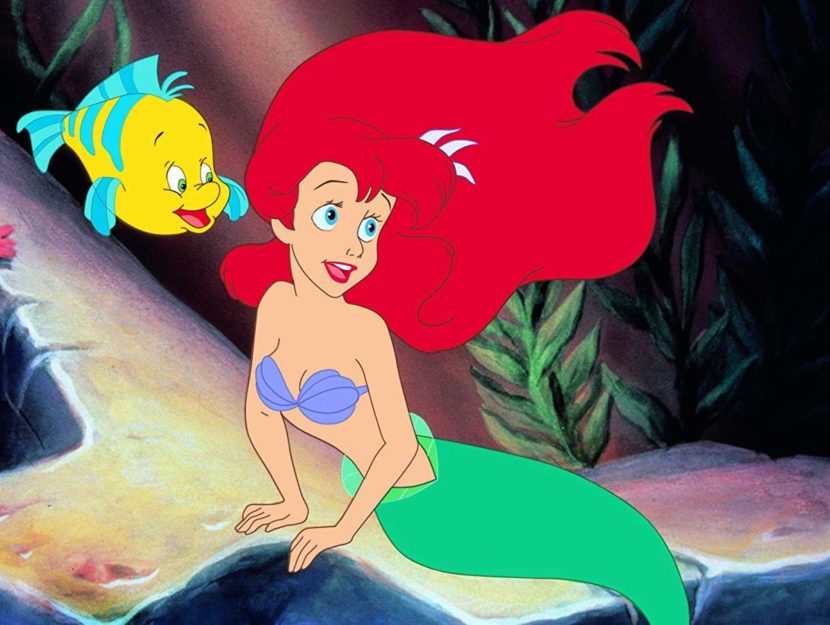 This week Disney released the Diamond Edition of “The Little Mermaid,” an instant classic that remains evergreen with the younger princess-chasing set. However, as we former children revisit the film (in all its digitally restored glory), certain nagging questions arise on the millionth viewing which cannot be put to rest, exposing the simplicity and relative idiocy of our youthful brains. Let’s tackle these in chronological order, shall we?

1. Why do we like Ariel?
It’s odd that musical theater types are so besotted with this movie, since literally the first thing we learn about Ariel (via Sebastian) is that she never shows up to rehearsals. The next thing we learn is that she’s willing to manipulate her less confident, less physically fit friend (Flounder) into helping her break the law, for no particularly noble reason. She also begins exhibiting obsessive behavior toward the first human she lays eyes on, dealing with criminals and mutilating her own body in order to pursue him. Perhaps on one of her scavenging trips she will run across a book on Borderline Personality Disorder.

2. Why is Flounder not a flounder?
Most of the sea critters have either human (gasp!) or descriptive names. This is a flounder. It’s a muddy-colored fish that’s famous for being flat and having both eyes on one side of its body, not for being comically round and getting stuck in port-holes.

3. Who the heck is Ursula?
In one of her first scenes, Ursula says aloud to herself (you’ll notice now that she spends most of the movie talking to herself): “When I lived in the palace …”
Was Ursula a royal figure? A court magician? A sous chef? Why was she exiled? There’s an awful lot of backstory we’re not getting here. Unusual since she’s one of the coolest characters ever invented by Disney.

4. How messed up is it that Ariel’s treasure trove includes a fish hook?
Isn’t that basically the human teenager equivalent of a switchblade or a handgun, or worse? See question No. 1.

5. If Eric’s ship hits huge rocks, how far from land could they possibly have even been?
As a kid it seemed like a totally plausible nautical disaster. To grownup eyes, it’s totally over the top: within two minutes the ship is swept up in a hurricane, dashed against the rocks, struck by lightning, and then explodes (because of the fireworks on board). But no, seriously, those rocks are huge. The movie makes it seem like they’re out on an ocean voyage of some kind, but they were really all hanging out just offshore. If you’re counting on a mermaid to save you in water this shallow, you probably qualify for a Darwin award.

6. Can you tell me more about this … Blackfish?
The song “Under the Sea” is one of the highlights of the film, up there with any musical number Disney’s produced before or since. And yet it drew mention in this Cracked list of racist Disney characters, thanks to assignations like “The blackfish, she sings.” (Here’s the fish in question.) It’s one of those blink-and-you’ll-miss-it moments that a child will barely notice. As a well-read adult, I found it worthy of a pause and rewind.

7. How did flounder get Eric’s statue into Ariel’s grotto?
This question hinges on two established facts: Flounder’s lack of physical prowess, and the two extremely narrow points of entry into Ariel’s secret treasure trove. When the statue’s first shown, it practically dwarfs the real Eric in size, and as demonstrated in question No. 5, it sank right near the coast where the ship hit those enormous rocks. In other words, the only acceptable answer is “magic.”

8. Was Ursula’s plan actually meant to kill Ariel instantly?
The moment Ariel becomes human, she can no longer swim or breathe underwater — inconvenient, since Ursula’s lair appears to be hundreds of feet underwater. If Sebastian and Flounder hadn’t been there to drag her to the surface — and neither Ariel or Ursula knew they were — she would have surely drowned immediately. Isn’t it likely that this had been Ursula’s intention all along? That would certainly gel with the typical “be careful what you wish for” message of many fairy tales. And if so, that officially makes Ursula one of the most dastardly villains of all time. If she’d wanted revenge, she could have easily just murdered Triton’s daughter outright — but she opted to change the girl into a human first, and then let her drown. Knowing how Triton feels about humans, this would have been the most humiliating blow of all.

9. Is Ariel the nakedest Disney Princess of all time?
The implied full-frontal nudity in the scene when Ariel washes ashore is impeccably chaste. However, it’s still quite startling compared to the ironclad modesty of most Disney heroines — especially as a grownup when your imagination automatically fills in all the omitted details, whether you want them or not. Think about it: there’s an extended sequence in a Disney animated feature in which a teenage girl parades around unselfconsciously on a public beach, naked from the seashells downward. For some reason she gets a free pass because she doesn’t share our Puritanical body-shame. Even so, Pocahontas would never.

10. Why doesn’t Ariel just write Eric a letter?
Our princess proves that she can write when she signs Ursula’s contract. So when Eric expresses dismay that she’s mute (and therefore not the girl who rescued him from drowning), she has three full days to find a pen and paper in the castle, and then pass him a note explaining that it is her, and that she has only temporarily lost her voice. (Is that latter part even true? It’s unclear, but: who cares? In the short term, Urusla’s spell would be broken, and it’s not like Ariel’s never lied to a man before. See question No. 1.)

11. What do the merfolk eat?
King Triton slanders humankind as “fish-eaters,” and Sebastian turns positively green at the sight of the murdered fish in the French chef’s kitchen. In Ursula’s lair we see her popping prawns as bon bons, which is portrayed as an act of unspeakable barbarism. However, in the real world, nearly all sea life feeds on … other sea life. So what’s on the menu in Triton’s kingdom? Perhaps lots of slime and plankton, or other things too horrifying to imagine. Or perhaps the merfolk and fish all eat each other, just like real sea creatures, but live in tragic convolutions of denial about it, finding it easier to blame the humans for depletion among their numbers.

12. Hey, where’d that gorge come from?
When Ariel seizes the carriage horse reins from Eric, they’re off like a shot down the bumpy country road! Suddenly a huge chasm yawns before them, but Ariel guns the engine and they sail across, landing safely on the other side, where the road resumes being a totally normal country road. So. What was that gorge doing there? How would Eric have gotten home if Ariel hadn’t been fearless enough to rocket across it? You’d think a kingdom as lavish as Eric’s would invest in better infrastructure like roads and bridges. Or is it possible that all of his subjects are essentially prisoners, discouraged from leaving town by either land or sea?

13. Did Sebastian just control the wind?
When Sebastian is setting the mood for the film’s other show-stopping musical number (“Kiss the Girl”), he entreats the help of the other animals, as well as the forces of nature, invoking them one by one: “Percussion … strings … winds … words.” At the mention of winds, a breeze instantly sweeps across the lagoon, making delightful music among the reeds. Clearly Ursula isn’t the only one who happens to know a little magic! Between this and question No. 7, I’m starting to suspect that every character in the film is a sorcerer in disguise.

14. Why can’t Max the dog talk?
Speaking of all the helpful animals, why can’t Prince Eric’s dog talk? Even dimwitted birds like Scuttle and crustaceans like Sebastian (on par with spiders, intelligence-wise) have the power of speech. Is it a result of being a land-animal? This raises questions no one has time to get into, such as: Why do the human-hating merfolk speak and understand English so fluently? Disney would later address issues like this by giving Pocahontas and John Smith a sort of mind-meld sequence in which they were suddenly able to understand each other via … magic or something.

15. How did Ariel spend that entire third day?
When Ariel wakes up on the third morning, she discovers that Eric is engaged to be married to Ursula (in disguise). She overhears Eric say, “The wedding ship departs at sunset.” Time to mobilize! However, the next shot we see is Ariel on the pier, despairing as the sun goes down and the ship fades away in the distance. Did she just go back to bed after hearing the news, spending the day in a depressive fugue state? Because I know we’ve all been there. Or perhaps she’d slept in until mid-afternoon in the first place? As a grownup I find it shocking that the entire conflict is narrowed down to a three-day window, and then the final day is just thrown away. I suppose that’s a very adult concern: where does the time go?

Bonus question: Why is it so important to stall the wedding?
As they race against the setting sun, Sebastian orders Scuttle to “stall that wedding!” Why? Scuttle’s attack on the wedding party does lead to Ursula’s voice charm being shattered, which I admit is pretty convenient. But even if Eric and Ursula had actually been pronounced man and wife … so what? The wedding is sure to be annulled once it’s revealed that under duress, the prince has married an evil supernatural squid-monster. That’s surely one of those no-fault situations, I can’t imagine even the most pious legal or religious official would consider it binding. And to think, Ursula would probably have gotten away with it if Scuttle hadn’t caught her talking to herself — yet again — in the mirror. Utopian as it may seem to mere mortals, clearly the mental healthcare in Triton’s kingdom left plenty to be desired.