Patricia Ellis Herr, Author of Up, on Empowering Steps

It started on a whim. Five-year-old Alex was a bundle of energy, the type of kid who could never sit still. She was running around and around a roadside information kiosk by scenic Route 112 when I saw the sign describing the Four Thousand Footer Club.

Every person who hikes all 48 of New Hampshire’s highest mountains is awarded a certificate and a patch by the Appalachian Mountain Club. I wondered if Alex would enjoy attempting such a hike. We could try ascending one of the smaller “4K” mountains; at the very least, she’d be able to burn off some excess energy.

Our first attempt at Mt. Tecumseh, the smallest of the Four Thousand Footers, didn’t go well. This was my fault; the White Mountains were covered with snow during the month of April and I wasn’t prepared for winter-like conditions. Undeterred, young Alex wanted to give it another go after the snow had melted. We tried again in early June.

The day was warm and bright, and Alex’s determination was obvious. She led the way and, though she became tired, she never gave up. Her face beamed with happy pride when her hand touched the summit cairn.

Since that day, more than three years and nine months ago, Alex has been hiking mountains on an almost weekly basis.

Sage, Alex’s little sister, now hikes too. The girls set their own summit goals and hike at their own paces; my role is to carry most of the gear. With every mountain they ascend, the girls learn more about their capabilities. As a result, their sense of empowerment continually grows. I love spending “trail time” with each of them. We’re out there from eight to ten hours every hiking day, so there’s a lot of opportunity for quality conversation.

Of course, parents don’t have to hike mountains to have similar outdoor bonding experiences with their children. It doesn’t matter if you’re in the city, the suburbs, or the country, and it doesn’t matter if your hike is long or short. It’s all good, as long as you allow your child to have most of the say.

Try this: next time you and your child have a warm day to spend together, go for a walk, and let her decide on the destination, but have a “no carrying” rule; this is a particularly empowering approach. Right away, your child knows that she has the power to decide where the two of you are going, and that she will be responsible for getting there on her own two feet.

If her desired destination seems unrealistic, don’t worry, and don’t naysay. Without judgment or negative assumptions, let her try. If she doesn’t make it, congratulate her for her efforts, then sit down with her and figure out how she can later obtain this goal.

If your child’s destination seems less than ambitious, again, don’t naysay. When she reaches her place of choice, congratulate her for her efforts. In time, she might want to increase the distance and visit other destinations…or, she might not. Not to worry; you’re both outside and she’s examining her surroundings. That’s all that matters.

Take a walk with your kid. Let her decide the destination and go at her pace. Encourage her explorations. Her confidence and strength will grow, and you’ll learn more and more about your wonderful child with every step she takes.

PATRICIA ELLIS HERR is the author of Broadway Books’ upcoming paperback original, UP: A Mother and Daughter’s Peakbagging Adventure and the mother of two very active young daughters. UP recounts their always exhilarating–and sometimes harrowing–adventures climbing all forty-eight of New Hampshire’s highest mountains. In this piece, Patricia tells a little bit about how that adventure began, and about how parents everywhere can share the empowering experience of the outdoors with their children. 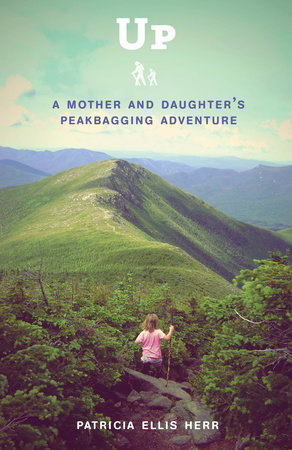