My Life in Bookstores

An avid reader shares her life journey through the bookstores that mean the world to her.

By Lauren Oster • 2 years ago 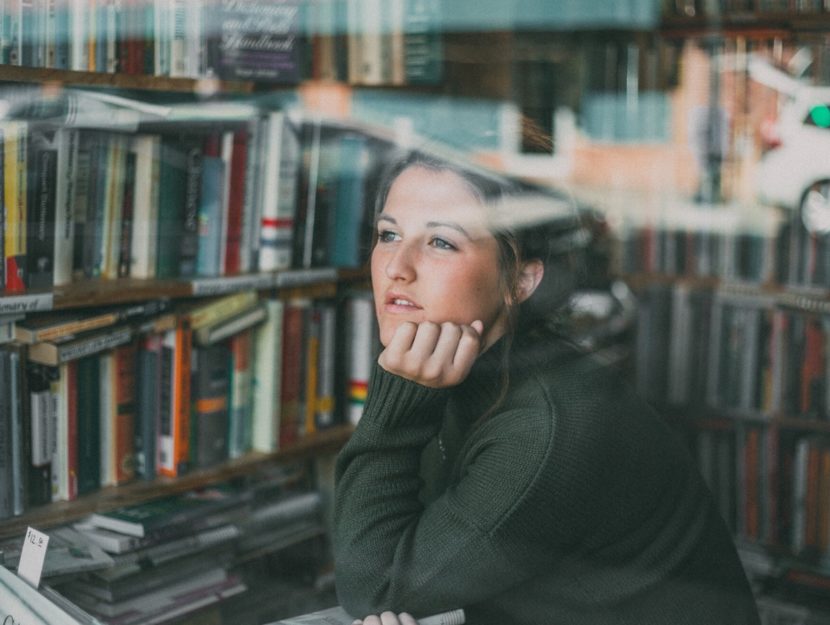 The Waldenbooks at Laguna Hills Mall was about two and a half rolling suburban miles from my house, a no-sweat bike ride for an eight-year-old who needed to read The Truth About Stacey as soon as possible. Like The Baby-Sitters Club’s authors (and Stacey herself—her truth was diabetes), I maintained a schedule, one that didn’t always overlap with my mother’s errands.

If my bookstore trips were illicit, they were obviously the right kind of wrongdoing. The relief I felt when I flopped down on my bed’s top bunk and cracked open each new volume flared in my reptilian brain like small-town fireworks. I recently texted my mother to ask if she’d known what I was doing all those years ago. “Nope. But it doesn’t surprise me.” And if she had? “Those were busy streets—I would have said no if you’d asked. I would have been worried and told you why it had been a bad idea (bike lock & helmet?).” Salmon don’t take bike locks and helmets upstream, I thought.

I applied for my first bookstore job—with my mother’s blessing—when I was home from college for the summer. By then, local editions of mall-based chains like Waldenbooks had given way to their parent company’s superstore-cafes; the Borders that took me on anchored a low-slung commercial strip like a castle perched beyond a medieval settlement. Before we threw the doors open each morning, I gathered with a crowd of coworkers for a series of managerial edicts: Oprah had anointed another title for her Book Club (gird your loins); a fresh batch of Pokémon trading cards was due to be unboxed (ditto); under no circumstances were the music section staffers to shrink-wrap body parts again (enough with the loins).

Borders hired me for my coffeehouse experience rather than the English degree I’d earn in a year, and I spent my first shifts in the café, where an astonishing number of regulars would page through their purchases while eating tuna salad on crackers. I felt a bit like my mother as I prepared industrial quantities of after-school snacks. It was, if I’m being honest, more consistently rewarding than the bookselling I’d eventually do there: for every customer who wanted advice on novels that would help a niece navigate womanhood(!), there was one who’d ask for “The Stranger, by Kay Muss, though I’m sure you’ve never heard of her.”

E-tailers were smoke on the horizon, but we were confident that they were too distant to be a real threat. We could process special orders just as quickly as they could, you see, and we were a valued part of the neighborhood (not unlike the mall denizens and independents we’d driven out of business). We were, after all, obliged to play The Sound of Music’s “So Long, Farewell” to coax scores of groaning readers home at closing time each night.

When Borders Group Inc. filed for bankruptcy in 2011, one 79-year-old San Clemente man told a local website that he’d been drinking coffee and reading books at our location for 12 years: “’If they would have charged me $10 to come, I would have paid it,” he said.

My second bookstore job was my first after graduation. I answered a San Francisco Craigslist ad and met Amanda, a former employee of Solar Light Books who’d purchased the venerable independent store and its inventory from its previous owners. As at Borders, the interview process began with an extensive literary quiz, though my performance didn’t make me look as good as I’d assumed it would. “You really gave me pause with the Borders stuff,” Amanda told me a few months later, “but you had a facial piercing, so I trusted my instincts.” (In all my time at the store, she never mentioned that she had spearheaded a massive campaign with the city to keep Borders out of her neighborhood the previous year.)

We had a bookstore cat, of course: Rosie, the ancient, long-haired beast Amanda had inherited with the store. A Victorian curiosity, she shifted from one still image to another, like zoetrope horses that spin in a reel and produce the illusion of motion. Ironically, Rosie-friendly patches of sun were few and far between at Solar Light: the shop was garden-level and crepuscular, prone to disastrous ceiling leaks that could destroy hundreds of dollars’ worth of inventory when it rained.

Though I’m sure Amanda was only a handful of years older than most of her employees, her business was matriarchal: we were encouraged to take five bucks from the till to get coffee down the block when the weather (inevitably) turned. While it was clear that my work was important to her—within a few weeks, I was selecting the store’s inventory from publishers—she encouraged me to abandon it for as long as necessary when I learned my parents were getting divorced and I told her I wanted to see my mother. She encouraged me to abandon it for good, in fact, when I was eventually offered a dream job at the SPCA; from one cat lady to another, she said, I deserved it.

Years ago, I wondered if Amanda suspected that the bookstore couldn’t survive in a gentrified corporate neighborhood—she closed it two years later, in 2003. It’s more accurate to say that her bookstore couldn’t survive in a gentrified corporate neighborhood, and she wasn’t interested in another kind: “I’m not going to spend my time selling 3 million copies of The Rules and Bridges of Madison County,” she said a few years after that. When I stumbled across that quote, I was reminded of the time she called me a dipshit for buying Henry Miller’s Tropic of Cancer, and of the time I shivered at my shift and she gave me her sweater. Salmon don’t take bike locks and helmets upstream.

For the last four years, I’ve spent four hours a week at New York City’s Housing Works Bookstore Café. Stocked entirely with donations and staffed almost entirely by volunteers like me, it supports Housing Works’ efforts to end HIV and homelessness. It is also A Bookstore in the most Platonically ideal sense of the term: Twin spiral staircases soar up to a second-floor wraparound balcony draped with fairy lights. A classic library ladder—the kind you’re never allowed to touch in real libraries, and that I’m only allowed to touch because I work there—glides along the fiction wall. It’s popular for parties and weddings, television and film shoots, and blind dates. It’s got that hard to describe, entirely irresistible smell. If pressed, I would compare it to a rain forest.

It is also bereaved donors who stack their loved ones’ libraries on a scarred counter and ask with their eyes if the books they give me will help someone else, a hesitant bachelor who asked me to curate a whole library’s worth of titles “one should know,” a regular with BOOK WORM tattooed on his knuckles. It is raucous readings, Alice’s Adventures in Wonderland signed by Alice herself, plane-ticket stubs, old photos, receipts from long-defunct shops, and books that were illegible decades before they reached us. It could easily be a collection of relics.

That said, it is also choices—the choices people make to support the organization’s cause and the choices others make to avail themselves of its aid, of course, and the choice I and my neighbors make to be meaningful contributors to our literary community. I found a bookmark from Solar Light in a volume I donated to Housing Works a month ago; an hour later, a customer approached the front counter and asked me what I thought of Henry Miller. I cleared my throat.