A Conversation Between Marwan Hisham and Molly Crabapple

Co-authors of Brothers of the Gun talk collaboration, illustrating memories, and art amid war.

By MARWAN HISHAM and MOLLY CRABAPPLE • 3 years ago 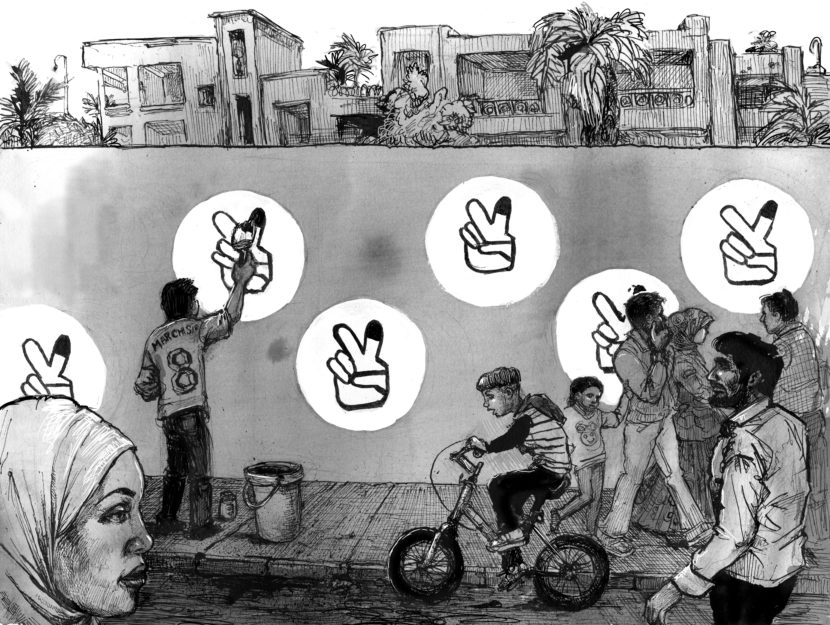 Brothers of the Gun: A Memoir of the Syrian War took us three years to write and illustrate. Here, we talk about our process for making art, the ways books saved us, and how the hell a memoir gets written by two people.

Molly: It’s a strange thing, isn’t it, for a memoir to be written by two authors? For a book written with “I” to have really been created by “they.” After we handed in our manuscript for Brothers of the Gun, we were practically placing bets on whether people would think I had ghostwritten your life, or that, rather, I had just drawn some pictures, and you nicely gave me coauthor credit. But we knew the idea of us as equal creators would be hard to get through people’s heads.

One can’t blame them—writers are narcissists. When two such maniacs work together, it takes the concept of “killing your darlings” to another level. We took each other’s darlings hostage and used them as bargaining chips to save our own darlings from execution by red editorial pen. Brothers of the Gun was an impossible collaboration, but it worked.

All this is my lead-up to asking, what’s it like to write your own life alongside someone else?

Marwan: I’d like to look at it from a different perspective: it was a challenge for both of us to enter an experience where we both could be in every sentence and in every illustration. This confusion, whenever it has existed, is understandable. But I keep musing on the idea that nothing about the writing process of the book was normal. We both interfered with each other’s sphere of dominance—you with my words, and me with your art—for the sake of creating one coherent, extraordinary work. We certainly overcame many hindrances that existed in our writerly consciousnesses; again, for the work, and for the novelty of creating in this way. Let ego be for the desperate.

Following up on the “I” angle, it was interesting to try two methods of delivering the story: one through writing down my own story in my own words, the other watching you transform the interviews you did with me into a style identical to my own. Can you describe what value this latter method added to the text?

Molly: I have this distinct memory of staying up very late with you in Istanbul, listening to you tell me about going through an ISIS checkpoint. I made you describe every detail over and over: the sandbags at the checkpoint, the demeanor of the guard, the sky turning pink—and my hands were click-click-clicking on the keyboard, trying to get down all the richness of your experience, to make a draft you would then modify and make your own. As writers, we’re opposites in so many ways. You translated Waiting for Godot in college and studied Ulysses, two books I can’t pretend to have finished. I’m an Orwell girl. In my own writing, I’d always sought the detailed, specific, direct. “Be complex!” you’d chide me. “Be mysterious.” I like to think that in this book, which fuses our very different voices, we killed what was worst about our own styles while keeping what was ours.

Another memory now, of you in Raqqa. We’d be texting on WhatsApp, and instead of talking about the war, we talked so much about books. You were reading Orwell’s Homage to Catalonia on your phone. I was reading a Nizar Qabbani book you gave me, Sparrows Don’t Need Entry Visas, killing myself on the Arabic. What do you think is the importance of books in a world so full of hell?

Marwan: Yes, that was some time! I reached a point when I was so immersed in the Syrian conflict (or rather, the local part of it) that I feared I’d lost trace of everything universal. English for me represented, and still represents, a window to view the world from a clearer, saner position. Fortunately for me, I read Hemingway’s For Whom the Bell Tolls in college, and it stuck in my mind. I recalled Anselmo’s remarks about the fascists over and over: “I have watched them all day and they are the same men that we are. I believe that I could walk up to the mill and knock on the door and I would be welcome except that they have orders to challenge all travelers and ask to see their papers. It is only orders that come between us.” I knew one must keep in mind the complexity of people’s behavior. The comparison between the Spanish Civil War and Syria’s war captured me, so Homage to Catalonia became a must-read. Books provided me a better way of making sense of events happening around me. In other words, books saved my soul.

Now, how did your study of Arabic and reading of Syrian writers help you understand the Syrian social context, and how did that help writing through my eyes?

Molly: You can only understand the bare contours of a country without knowing the language. I sometimes joke about writing a short story in which a Chinese journalist writes the definitive report on the soul of America despite only knowing how to say “hello” and “fuck you,” but that’s where many journalists who report on the Middle East find themselves with Arabic, myself included when I began reporting. I started studying the language out of shame, and then continued out of love. Arabic literature is my addiction and escape, be it in the bitter elegance of Darwish or Nizar Qabbani’s satires of dictatorship, or Mustafa Khalifa’s Solzhenitsyn-esque chronicle of Syrian prisons. Arabic defines “good prose” as something far more grammatically complex, melodic, and ornamented than “good prose” generally is in English, and so by knowing the language, I also learned so much about your style, and what you were trying to achieve.

Speaking of translation, in our first collaborations, I drew from photos you took, but most of the art in this book we made without reference. Want to describe how we took your memories and used pen and ink to resurrect them?

Marwan: This phase was one of those I am proudest of. While humans are still working on technology to reach into a brain’s memories and upload them to computers, the challenge of extracting memories from my brain and putting them before your eyes was fairly enjoyable. Sure, we began by using hundreds of Syria images available on the internet to construct the pillars of several illustrations, but it was really fascinating how you could easily visualize scenes from my verbal descriptions so accurately that you’ve managed to get the exact detail for certain drawings with zero reference. I recall here the ISIS fighters connecting to the internet in the café with realistic positions, outfits, looks, attitudes, etc. It was sublime. Was that way of making art new to you? How did it affect your work, knowing that some objects might not be representative and hence might be redrawn until they were true to my memory?

Molly: I’ve often drawn things without reference, but never with this obsessive fidelity to a truth I had not myself witnessed, and to another person’s vision. Of course, redrawing is torture, but god it was worth it. I’m thinking of a portrait of a Yezidi mother and daughter. You tore up all my early ideas. “Make the hands more careless.” “Make her younger!” “Older!” I wanted to kill you. But we needed to do it to create something that was true to the women’s dignity, the tragedy they endured, and that was as far as we could get from Western clichés. 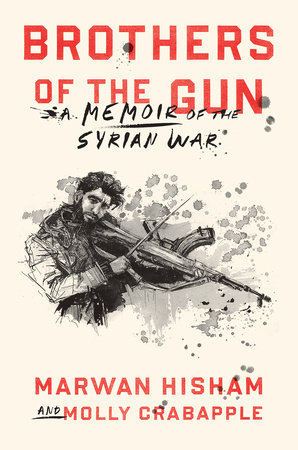 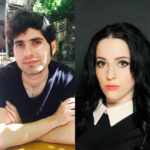 MARWAN HISHAM is a Syrian freelance journalist who since 2014 has covered Syria, Iraq, and Turkey. His work has been published in Vanity Fair, The New York Times, The Intercept, and Foreign Policy. MOLLY CRABAPPLE, an artist and writer in New York, has drawn in Guantanamo Bay, in Abu Dhabi’s migrant labor camps, and with rebels in Syria, and received widespread praise for her illustrated memoir Drawing Blood. Crabapple is a contributing editor for Vice and has written for The New York Times, The Paris Review, and Vanity Fair. Her work is in the permanent collection of the Museum of Modern Art.

About MARWAN HISHAM and MOLLY CRABAPPLE

MARWAN HISHAM is a Syrian freelance journalist who since 2014 has covered Syria, Iraq, and Turkey. His work has been published in Vanity Fair, The New York Times, The Intercept, and Foreign Policy. MOLLY CRABAPPLE, an artist and writer in New York, has drawn in Guantanamo Bay, in Abu Dhabi’s migrant labor camps, and with rebels in Syria, and received widespread praise for her illustrated memoir Drawing Blood. Crabapple is a contributing editor for Vice and has written for The New York Times, The Paris Review, and Vanity Fair. Her work is in the permanent collection of the Museum of Modern Art.